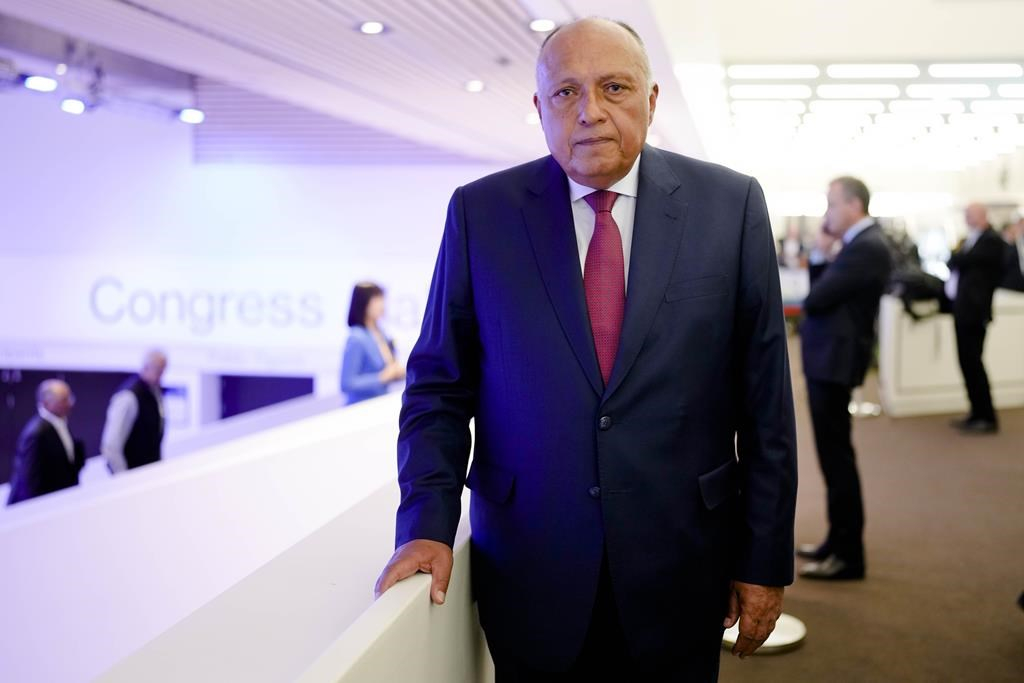 Egyptian Minister of Foreign Affairs Sameh Shoukry poses for media after an interview with the Associated Press at the World Economic Forum in Davos, Switzerland, on Monday, May 23, 2022. (AP Photo/Markus Schreiber)
Previous story
Next story

Egypt, host of the next United Nations summit on climate change, will push countries to make good on their pledges to sharply reduce greenhouse gas emissions, facilitate “non−adversarial” talks on compensation to developing countries for global warming impacts and allow climate activists to protest, said the incoming president of COP27.

In an interview Monday with The Associated Press, Egyptian Foreign Minister Sameh Shoukry, who is also the president−designate of the next annual Conference of the Parties, to be held in November in the Red Sea resort city Sharm El−Sheikh, called the overall goal “implementation.”

Shoukry said the last summit, held last year in Glasgow, Scotland, finalized many commitments made during the Paris Agreement in 2015, which aimed to reduce emissions aimed at limiting global warming to 1.5 Celsius (2.7 Fahrenheit) since pre−industrial times.

“The commitments and the pledges now have to be implemented in all sectors of the climate change agenda, whether it’s in adaptation, mitigation or finance, loss and damage,” said Shoukry, who was attending the World Economic Forum in Davos, Switzerland.

In recent years, many developing nations and activists have increased long−standing calls to establish a fund to compensate poor countries for devastation brought about by climate change, disproportionately caused by rich countries because of past emissions.

The call was rejected during last year’s summit. Many supporters of the idea, often called “loss and damage,” hope to make progress on it in November. Their arguments could get a boost by the symbolic significance of this conference being held in Egypt, a developing nation in North Africa.

“We hope that the discussion (on loss and damage) is comprehensive, but it is non−adversarial,” said, Shoukry, adding that there should be a recognition among all countries “that we are all in the same boat and for us to succeed, we all have to succeed.”

Shoukry said protests would be allowed during the conference. Egyptian authorities crack down on demonstrations not sanctioned by the government and retain the right to cancel or postpone any protests, leading activists to wonder what, if any, demonstrations would be able to happen, a common occurrence at previous COPs.

“We are developing a facility adjacent to the conference center that will provide them the full opportunity of participation, of activism, of demonstration, of voicing that opinion,” said Shoukry. “And we will also provide them access, as is traditionally done on one day of the negotiations, to the negotiating hold itself.”

Protests at global U.N. climate conferences often fill the streets with floats and banners and go on for days. The protests as well as booths and press conferences outside the official facilities make up a conference of their own, although they are not where critical language on carbon commitments is hammered out.

Shoukry said during meetings in Denmark earlier this month around climate pledges he invited protesters who were outside to speak with him. He called the meeting “productive” and that Egypt’s climate goals lined up with those of many protesters.

“We recognize their impact, their determination, their commitment to keep us all honest as governmental representatives and parties that we should not be delinquent and rising to the occasion and dealing with this very important issue,” he said.

Ahead of hosting the conference, Egypt has been racing to launch many agreements around renewable energies. In March, Egypt and Norway signed an agreement for several projects around green hydrogen and building green infrastructure projects in African countries. Egypt and clean energy company Scatec also signed a $5 billion memorandum of understanding to establish a plant in the Suez Canal area for producing green ammonia from green hydrogen. Such deals come on the heels of years of steady investment in wind and solar technologies.

Shoukry said Egypt was relying as much as possible on renewable energy in the building of several new cities, including a new administrative capital east of Cairo. Critics have called it a “vanity project,” but the government has said it’s necessary to absorb Cairo’s booming population, expected to double to 40 million people by 2050.

Shoukry said a rapid shift to renewable energies presented enormous opportunities for investors, a common argument of proponents. When asked whether fossil fuel companies could or should be part of the transition to renewable energies, an argument made by oil and gas companies, including many at the Davos conference, Shoukry disagreed.

“I can’t say that fossil fuels are part of the solution. Fossil fuels have been the problem,” he said. “We might see in gas a transitional source of energy with certainly less emissions. But I think we have to really move quickly to the net zero goal and we have to apply ourselves more effectively in new technologies, in renewable energy.”