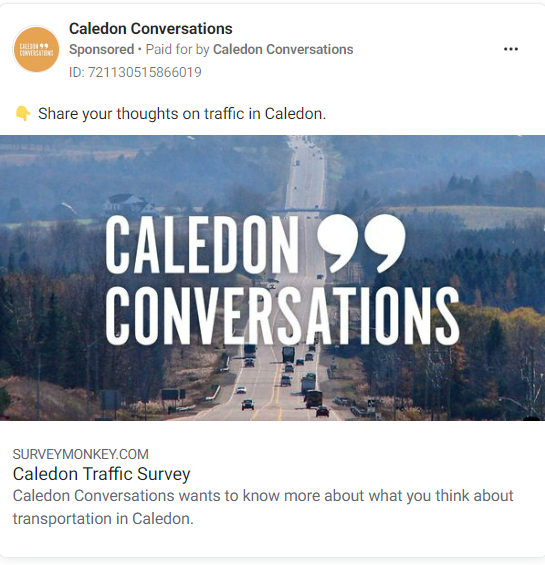 A Facebook page identifying itself as a non-profit organization that discusses issues pertaining to a town in the Greater Toronto Area is linked to the same right-wing political operatives behind a slew of purportedly grassroots community pages across the country.

Ads on the Caledon Conversations page list the phone number of right-wing influence group Canada Proud and the address of communications company Mobilize Media Group, both of which were founded by well-known conservative political strategist Jeff Ballingall.

The approach echoes that of anonymous Facebook pages like Squamish Voices in B.C. and Vaughan Voices in Ontario, which claim to be community groups but are in fact connected to Ballingall’s organization and company.

“This is like Kremlin-style tactics,” said Irene Ford, a Vaughan resident who began digging into Facebook pages when she learned about one in her community that poses as a local group but is in fact linked to Canada Proud. “The narrative is being controlled to support what these very private interests want … and it’s really manipulative.”

Caledon Conversations was created on April 25, and describes itself as “a platform for discussions, news, and all things Caledon.” In contrast to other pages linked to Canada Proud, it categorizes itself as a non-profit organization, rather than a community group. It is unclear if it is in fact a non-profit organization; a search of Ontario’s business registry, which includes non-profits, does not bring up any entity under that name.

Caledon locals were soon questioning who was behind it. The one-page website linked to its Facebook page reads: “We want to make sure that our politicians are held accountable. Respecting the taxpayer, helping our community, and working for everyday citizens. We deserve nothing less.

“Caledon Conversations is an organization created to stand up for Caledon.”

Kate Hepworth, president of the local village association, noticed the page when it popped up in her feed and was curious.

As ads and posts appeared linking to local news stories and surveying residents on their thoughts on traffic, what they love most about Caledon, affordability and other matters, Hepworth asked in the comment section repeatedly who was responsible for the page. In response to a “Happy Victoria Day, Caledon!” post, she replied, “From who? Your website says, ‘We want to make sure that our politicians are held accountable.’ By who?”

She didn’t receive an answer.

A Facebook page identifying itself as a non-profit organization that discusses issues pertaining to a town in the Greater Toronto Area is linked to the same right-wing political operatives behind a slew of purportedly grassroots community pages.

“That starts to get a little covert,” said Hepworth. “If you’re going to have a credible conversation, put it out there who you are and why you’re looking to have this conversation.”

Ballingall launched Ontario Proud in 2016, which raised more than half a million dollars, mostly from developers and construction companies, to run a Facebook campaign credited with helping Doug Ford’s Progressive Conservatives win the 2018 provincial election.

He also worked as a digital director for Erin O’Toole’s Conservative leadership campaign and in 2019, founded the national right-wing influence group Canada Proud.

Ballingall did not respond to a request for comment about Caledon Conversations. He told Canada’s National Observer when reached by phone in late March that he did not want to speak to the publication. He added that Mobilize Media Group does not discuss its clients and all information about what the company does is available on its website.

Mobilize Media Group’s website describes the company as “storytellers who build communities, influence public opinion, and rally change.” It touts its ability to create content that goes viral, grow “an online community that genuinely supports your cause” and “harvest troves of data to guide your campaign and measure its impact.” The company is responsible for Canada Proud’s Facebook page, which describes itself as “working to defeat [Prime Minister Justin] Trudeau.”

Earlier this year, a Canada’s National Observer investigation traced ads run on more than a half-dozen supposedly local grassroots Facebook pages back to Canada Proud and Mobilize Media Group. In some instances, the pages masquerading as local community groups ran smear campaigns against area politicians. While legal, some warn that political and private interests working behind a veil of anonymity to push certain agendas can undermine democracy.

Christie McLeod is changing the way lawyers think about climate