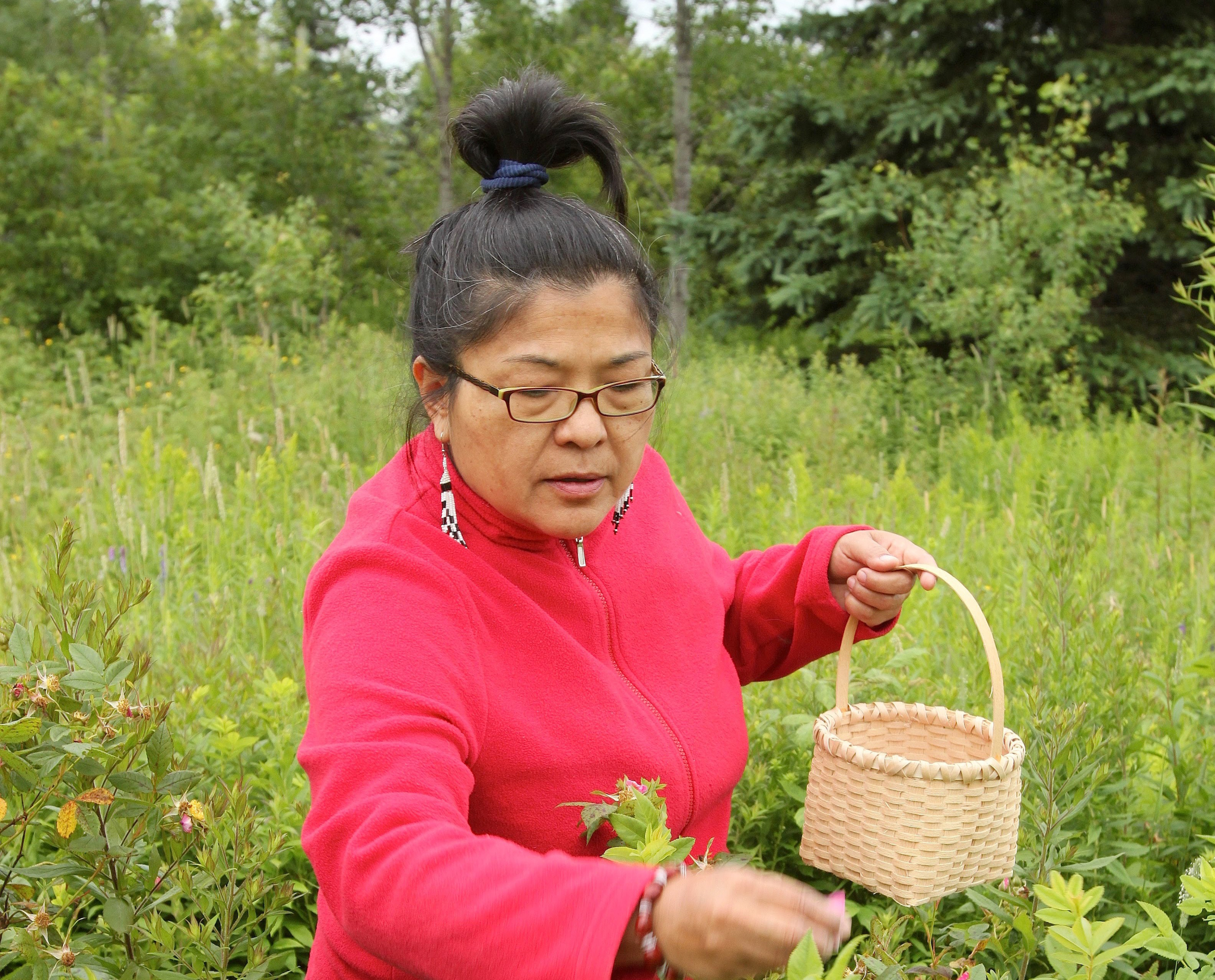 As summer approaches, Indigenous communities in New Brunswick are looking ahead with frustration to another season of glyphosate spraying.

Glyphosate is a herbicide sprayed aerially in industrial forestry to suppress the growth of the deciduous plants, like hardwoods and berries, that spring up in the wake of clear-cuts and outcompete planted softwood seedlings. It is also applied along power line routes.

Proponents of glyphosate use say it is a way to maximize the output of forested land.

But Indigenous leaders in N.B., which is the unceded territory of the Wolastoqiyik, Mi’kmaq and Peskotomuhkati peoples, say the practice affects the ability of their communities to harvest the land.

“And now we can't because of the spraying that NB Power is doing, and we don't dare to consume the berries and the nuts and medicines that grow [along] those power lines,” he said.

Spasaqsit Possesom says the Indigenous communities were never consulted about the spraying. “This form of forest management is like committing eco-genocide on the rest of the flora and fauna.”

Among the provinces, N.B. has the highest rate of glyphosate use in forestry, based on land mass. In 2018, for instance, glyphosate was applied to 15,723 hectares of forest in the province, mostly by helicopter. Ontario sprayed roughly double that, 33,968 hectares, but New Brunswick is less than a 10th Ontario’s size.

In recent years, opponents of glyphosate use in the province have become increasingly vocal, citing concerns of the impact on wildlife and on the harvest of traditional foods and medicines.

Last summer, New Brunswick’s standing committee on climate change and the environment held hearings on herbicides, at which scientists, citizens’ groups and Indigenous leaders presented. In November, the committee issued 20 recommendations (though stopped short of calling for a ban on spraying), including that the minister immediately request NB Power to cease using glyphosate along transmission lines. None of the recommendations have yet been implemented.

A spokesperson for New Brunswick’s Department of Natural Resources and Energy Development said they are still under review. NB Power issued a statement saying once the province decides, it “will apply those [recommendations] to our operations as directed.”

Some Indigenous leaders say the concerns extend beyond the forest itself.

While signs are posted in parts of the forest slated to be sprayed, Cecelia Brooks, water grandmother for the Canadian Rivers Institute, says there still isn’t clear enough communication about where spraying is taking place, and overspray — when the herbicide drifts onto non-targeted areas — is a concern.

As a result, Brooks says she restricts her harvesting to wooded areas around her home. She’s also heard of community members who have stopped collecting medicines such as muskrat root and sweetgrass, or foraging traditional foods like fiddleheads from areas they fear are contaminated, like the Wolastoq River, altogether.

“If you look at the long-term effects of this, you're talking about a culture that's already been affected by cultural genocide, and now we're in the process of recapturing and reviving our culture. And yet people are afraid to go out and harvest.”

In late 2021, the Wolastoqey Nation amended a title claim filed the year prior asserting title to the Wolastoq River watershed and surrounding area, in part on the grounds that “reckless resource extraction” was damaging traditional lands. The title claim had initially named the provincial and federal governments but was amended to include the province’s largest private landowners: forestry companies such as J.D. Irving Ltd. and its subsidiaries (which own land that was given away, or sold for next to nothing, by the province), as well as NB Power. If the Wolastoqey Nation wins the claim, agreements would need to be in place with the nation before forestry operations take place on these lands.

Brooks says she hopes in the future, that move could bring about changes in the use of glyphosate.

“What that does is it gives the Wolastoqiyik people the ability to speak for the trees, so that we can protect the forests in that way.”

As for the upcoming spraying season, Caroline Lubbe-D’Arcy, who heads the group Stop Spraying in New Brunswick (which has mobilized much of the broader public engagement on the issue, including the largest petition ever tabled in the New Brunswick legislature), says the fact nothing seems to have changed in the wake of the standing committee’s recommendations is frustrating. Her group remains focused on political action.

“We've done the mobilization piece that other provinces are still struggling with. We're at the point of pushing politicians.”

But given the growing chorus of voices already calling for change, Indigenous leaders aren't sure what else it could take to convince the province to change course.

“It seems really irresponsible to continue,” says Brooks. “And I really don't know what it's going to take for New Brunswick to come to its senses, and say, ‘Hold on, we need to be more careful about what we're putting out there.’”

Given that health agencies in

Given that health agencies in Canada, the USA, Australia, and Europe have all done extensive studies on glyphosate and have all concluded that amounts in food products are well below safe levels and do not pose a risk even to infants, pregnant women, or cattle - it would be great if you could expand on this article with some additional information other than "glyphosate bad". We can't choose to believe vaccine science, for example, and then reject studies on pesticides because we don't like the results.

Three things:
-- Regarding poisoning plants that might "suppress the growth of the deciduous plants, like hardwoods and berries, that spring up in the wake of clear-cuts and outcompete planted softwood seedlings. It is also applied along power line routes. Proponents of glyphosate use say it is a way to maximize the output of forested land."

They get the quality, but the fact that there is no such competition means the trees in the "reforested" plantation grow considerably more quickly, resulting in thicker annual growth rings and less dense wood, with less mass and less strength.

Glyphosate is highly persistent in the soil, is absorbed into every part of the plant, and disrupts mineral absorption and use by plants susceptible to the poison.

I've never seen any studies relating to human health and glyphosate ingested in food or water. Certainly in animal studies, there are cancers, birth defects, reproductive issues, nervous system issues, behavioural issues ... the list goes on. From what I've read, it seems that glyphosate operates through a metabolic pathway not found in humans, called the "shikimate pathway," and it's been assumed that because of that, humans aren't harmed by it.
However, by now probably everyone understands, or at least has heard, about probiotics, and gut bacteria: that some are good, some bad, and we need the good ones for a whole lot of bits and pieces of the body's metabolism to work properly. Those good bacteria do a lot of things, from breaking down food, to converting substances into forms the body uses them in, and to signalling the processes that need to take place. That's a lot of work that can't get done if those bacteria are harmed, and the "baddies," (which they help to keep in check!) can take over and do things downright bad for several aspects of human health.
And those good bacteria (guess what!) have shikimate pathways.

It's probably impossible to avoid consuming some glyphosate in food, even home-grown organics, because glyphosate is everywhere. Imagine one has a generally healthy diet, and eats cereals/grains fairly often (they show up in most processed foods, btw) ... and so the populations of good bacteria in one's digestive tract are challenged daily, and are more likely than not to eventually be overpowered by the bad bacteria.
Then consider two scenarios: growing up metabolically challenged by an improperly working GI tract due to lack of thriving colonies of good bacteria, at each developmental stage locking in the deficits of the prior stage, or depending on the particularities between individuals, just accumulating the continued downstream effects of any given metabolic process, or any given developmental deficit.
The truth of it is that in deciding *acceptable* limits, were not decided upon human data related to glyphosate in food.
There are some short-term studies relating to agricultural workers exposed by inhalation or skin contact while spraying but even there, there are no data available (or even possible) as to the total amounts ingested, inhaled or absorbed through skin.
I am unaware of any long-term follow-up studies of such agricultural workers.
There have been disturbing shenanigans wrt glyphosate toxicity and side-effects in a number of kinds of organisms.
Finally, glyphosate is an organophosphate pesticide, implicated in all manner of conditions involving several very important metabolic cycles that are interdependent upon one another, and sometimes epigenetic effects ... depending upon the genetics one inherited and the environment from conception onward.
Glyphosate acts by binding to a broad spectrum of minerals and is persistent in soil and water, as well.
It's the principal active ingredient in Monsanto/Bayer's "RoundUp" ('weed-killer', defoliant/crop dessicant).
In most people glyphosate passes through the GI tract and is mostly eliminated in urine within a few days, some fewer, some more, and some perhaps for a long time. In the meantime, the damage gets done while gyphosate is passing through.
Then again, it's probably impossible to measure the exact amount of glyphosate that might be in anyone's body at any given time.