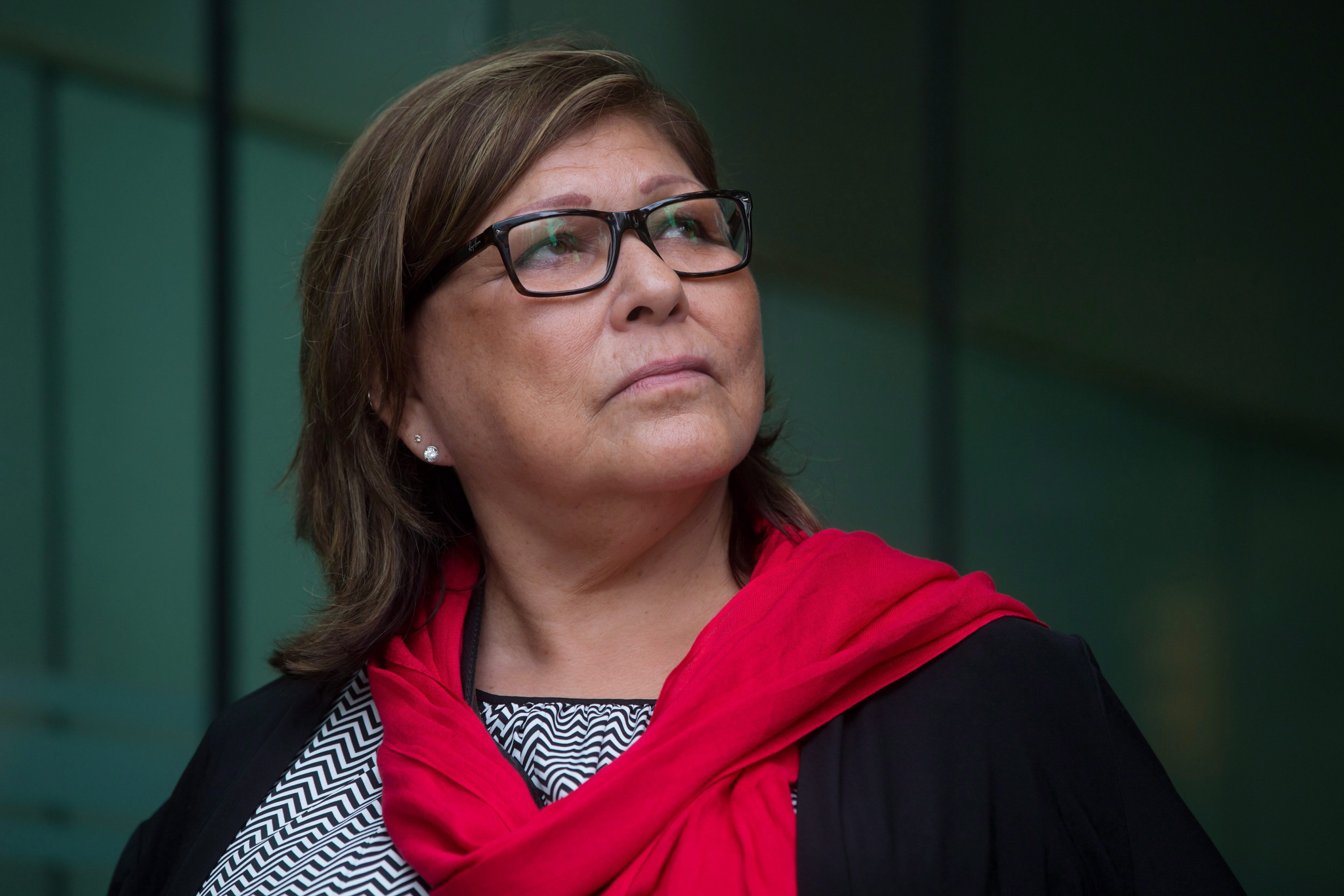 Joanne Mayer dreamed of becoming a police officer from the time she was five years old.

In 1988, when she was 21, her dream came true. She graduated from RCMP training with flying colours. She had hoped to start her career in an eastern province, where she could be close to her family and use her native French, but instead she was sent to Gibsons, a small town in British Columbia, a 40-minute ferry ride away from Metro Vancouver and across the country from her family.

The small detachment had just 10 police officers and Mayer was their first female officer.

When she arrived, she says another officer told her he didn’t think women — especially French women — should be allowed in the RCMP. She says she was treated “like a gopher,” made to make the coffee and clean the police cars.

The other officers often played tricks on her, such as telling her to go into the local strip joint’s back door, which led directly onto the stage, or pinning her badge on her hat upside down.

She didn’t tell anyone how tough it was, especially not her parents, who were already worried for her safety.

After about three years on the job, she said she was called out of bed one night to go to a domestic dispute. She asked dispatch to call for backup, but no one appeared. She could hear a fight, but after she announced her presence, everything went silent.

When she went inside, a woman was lying on the floor, blue, with a telephone cord wrapped around her neck. Mayer says she checked the woman quickly, finding a faint pulse before a man jumped out of a closet with a knife.

“I’m so glad I had on my bullet-proof vest. The guys always laughed at me for wearing it… It saved my life,” she said.

Female #RCMP officers recall being treated like "gophers" and denied backup by workmates who felt women had no place on the force. #discrimination #harassment

Somehow, she got the knife away from the man and handcuffed him. The woman survived.

The next day, Mayer was reprimanded for going in without any backup and when she got angry, she was coerced into resigning, she said.

Today, Mayer is part of Breaking Barriers Together, a group led by former RCMP Const. Janet Merlo calling on the federal government to establish an independent body to investigate complaints and allegations by RCMP members and civilian employees. Merlo was the lead plaintiff in a 2017 class action settlement that resulted in more than $100 million in payouts to women who worked for the RCMP.

“If my daughter were to join the RCMP, I would be so afraid for her,” she said. “I want to make sure that there will be change.”

The RCMP declined an interview for this story but sent a written statement saying the force welcomes any examination that could improve its operation and engagement and that change is happening. The force has launched an Independent Centre for Harassment Resolution that uses a trauma-informed approach to resolve harassment complaints and to prevent workplace conflicts.

“Harassment and discrimination in any form is unacceptable, and individuals who engage in it will be held to account,” the statement says. “An external expert is currently conducting a review of conduct measures and their application to ensure they meet modern expectations of fairness, transparency and effectiveness.”

Marge Hudson, now 66, says she is part of the group pushing for change because she wants to help the force reach those goals.

Hudson was hired by the RCMP in 1979 when she was just 23 years old and was the first female Indigenous RCMP officer in Manitoba. She stayed 31 years.

“I loved my job — why do you think I stayed so long? But they made it very difficult for me,” Hudson said, her voice breaking. “I’ve never been treated so bad in my life.”

Hired as a special constable to teach non-native RCMP members about Indigenous people and what to expect on reserves, her training was shorter, she graduated in brown serge, not red serge and she was paid less. After 11 years, she became a regular member.

“It started with systemic racism from the beginning, from Day 1 when I was accepted,” she said. “I was treated differently because I was Indian.”

She was singled out from the very beginning, sent on dangerous jobs without backup, never considered for a promotion and subjected to racism, such as being told she was fat “because all Indians are fat,” court documents show.

But even now, she would never discourage anyone from joining the RCMP.

“I know right now, there’s a young girl in [the training academy] who has joined the RCMP because of me… Hopefully, it’s going to be different for her,” Hudson said.

Her goal is to be an advocate for people who do not have a voice.

“If the RCMP wanted help to fix this, they can call me. I would still help them fix this,” Hudson said. “That’s why I belong to the group. It’s not to badmouth them, it’s to help them out.”

I'm trying to imagine anyone

I'm trying to imagine anyone arguing that systemic racism and sexism don't sully the work and reputation of our armed forces and RCMP.....after reading articles like this. And this is not an isolated article, or the first I've read of women being systemically bullied by a predominantly male workforce.

That such shameless behavior would extend to sending women in without back up on dangerous calls.....and then turn around and discipline them for going in without backup, tells me we need more than a review or one more study. That we may still have police forces better equipped to deal with real emergencies than they have in the United States....is the miracle.

But up here in Canada, should a classroom be taken over by a man with a gun.........we could still send in the female constable. So let's support these women. Our kids lives may depend on them.

The entire myth of the RCMP

The entire myth of the RCMP is an outright lie. It was, in fact, just another of the overtly racist para military creations of the British Empire, established to protect its stolen wealth from the depredations of the conquered "natives" in its far flung colonies.

Do not be fooled by the self serving lies of that same Imperial establishment that routinely burned all its remaining paperwork when it finally abandoned the various colonial administrations and outposts it had defended with murderous ferocity.

The few remaining records that made it back to Whitehall were quietly buried in the closely guarded colonial archives and their very existence was denied until very recently. A few intrepid researchers, combing through the personal archives of grandees whose wealth and status were built on the spoils of the imperial adventurers began to unearth in diaries and log books the realities of Britain's Colonial rule.
Eventually they amassed enough evidence to demand from the Colonial Office the records salvaged from the collapse of the Empire. The little that remains is such a damning account of the provocative actions of semi-clandestine para-military units charged with keeping the "peace of the colonies" that Britain now joins the ranks of King Leopold's Belgian Congo forces in the massacres, the enslavement, the genocides of its colonial subjects.

The facade that Britain has long maintained of the civilizing benefits of Colonial rule is now rapidly crumbling and the open repudiation of Britain during the recent royal visit to the Caribbean is the result of the researchers publications - validating the buried grievances of the "Commonwealth".
Whatever small gestures her gracious Majesty may have made during her 70 years of covering up are vaporizing in the heat of recent disclosure. The Deer in the Headlights expressions on Kate and Wills faces is part of the reckoning to be paid and may well presage the Fall of the House of Windsor.
Canada did not escape the heavy hand of Colonial discipline and the RCMP. to our shame, is the glaring remnant of everything that was horrific about British Imperialism.

It is amazing to me how impossible it is to shake off the vile traumas of colonial rule; its naked aggression, greed, and entitlement. The RCMP was birthed at the height of colonial white supremicism and the bloody stains continue to taint the entire force.

I am not at all sure that reform will solve what ails the RCMP - it is so entangled in the white male supremacist fantasy that most likely total dis-establishment is required. Since all of North America's infamous policing is founded on this principle and attended in due course by the bone deep assumption that no one of colour, or not vigorously "masculine," belongs in this murderous outfit. No one who is not white, male, or northern European can be trusted to police all the other, lower life forms.

Fundamentally, this is the unyielding steel of the esprit de corps that plagues ALL the military, para military, and most of the nation's civil servants. If you ain't white, you ain't worth sh*t.

Defund, de-establish the entire apparatus, Fire them all. Make them re-apply and undergo rigorous examination as to their underlying beliefs and whether or not they can be rehabilitated. Establish quotas for the hiring of "others", in line with their share of the population. Demand "real} education. and regular re-education., revamp all required record keeping so that "rape" reports cannot languish on dust laden shelves. Revise the laws, the appointments of the entire judicial system. Ensure that 50% of all judicial employees/appointees are female, and that whatever chain of command is established allows for complaints to be directed to supervisors qualified to deal with them. Ensure that all disciplinary actions are overseen by blended sworn officers and civilian committee/board members.

Ensure that the national police force is equipped with the technology, the science, the expertise that it needs to function efficiently.

While re configuring policing in Canada - ensure that all the ancillary supportive agencies required to deal with the complexities of the era, mental health, drug abuse, abuse of vulnerable persons, Public health agencies, are established properly, overseen correctly.

Finally, Canada's governments federal and provincial must fulfill their responsibilities in regulating the nation's finances, international trade, and honest commerce.
All of us must accept that thanks to our uncontrolled population growth, it is no longer feasible to pine for small government. The barn doors are open the horses have been stolen, the thieves are metastasizing from sea to sea to sea eating away at the land beneath our feet. There are few if any innocent peoples left on whom the crooks can feed.
One has to choose, crooked or straight?