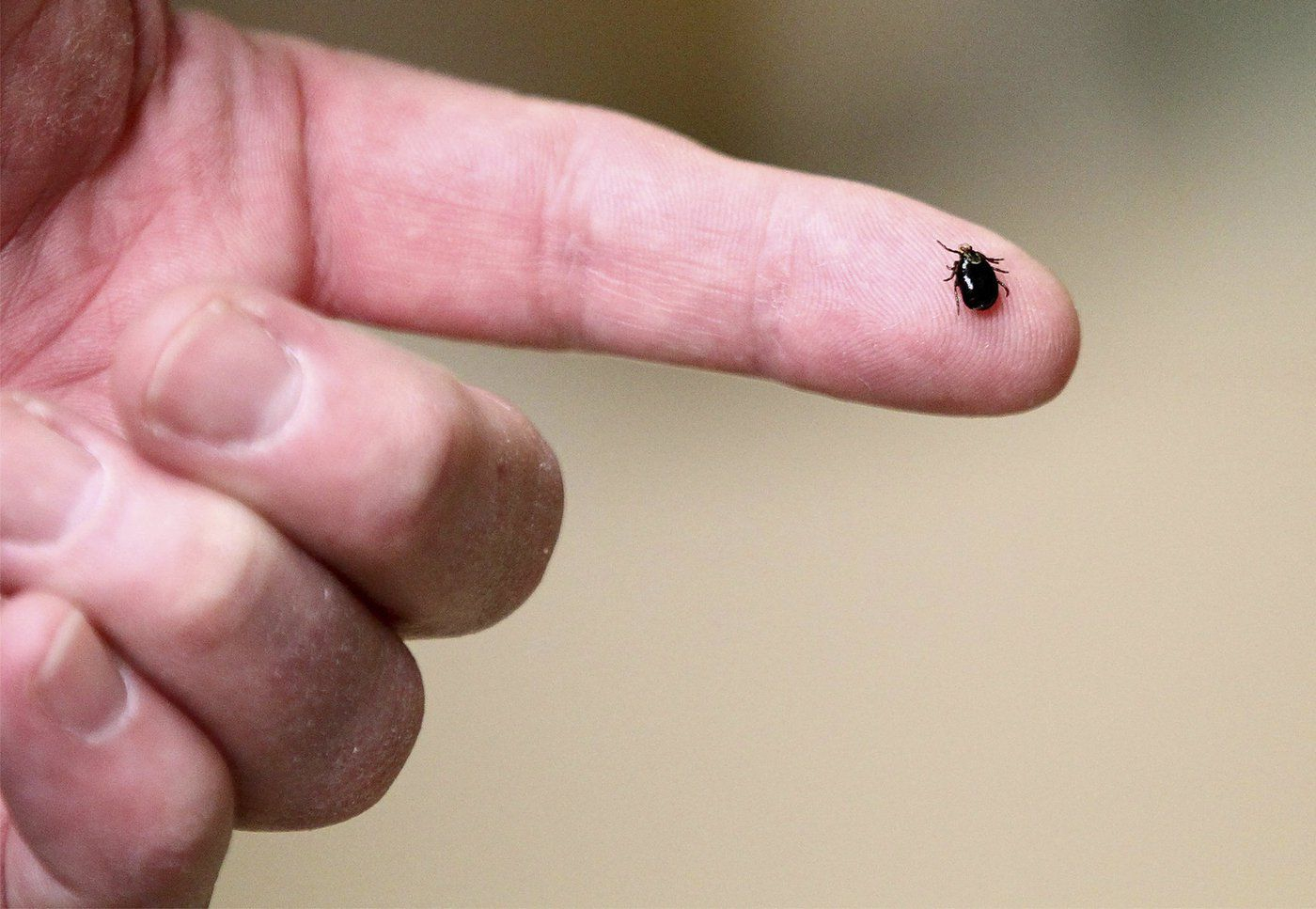 In this March 24, 2017 photo, a tick is displayed in Plainville, Mass. File photo by The Associated Press/Paul Connors/The Sun Chronicle
Previous story
Next story

The prevalence of ticks that can carry Lyme disease is expected to be higher than ever in much of Canada this year, researchers say.

Vett Lloyd, a researcher and director of the Lloyd Tick Lab at Mount Allison University in New Brunswick, says that as the impacts of climate change progress, each tick season will likely be worse than the last.

“As the winters are getting milder and shorter, the ticks are surviving better, and they have more time to feed and have a tick romance," Lloyd said in a recent interview Friday. "Once a female tick finds a male and food, she can produce for roughly 3,000 eggs. When this starts happening, (the population) explodes very quickly."

Nova Scotia has the highest ratio of ticks to people in Canada, Lloyd said, and is second to Ontario in the total number of reported ticks. But the insects can be found across Canada.

People will notice ticks, maybe on their pets or in their hair, after spending time outside near long grass. They’re active in late April through June, and then they typically rest through the hottest months, Lloyd said. Tick presence then peaks in late September through to November.

The tiny bug is a concern because it spreads Lyme disease, which is harmful to humans and pets. Not all ticks carry the Lyme disease bacteria, but black-legged deer ticks are most likely to be infected, Lloyd said.

Cases of the tick-borne disease increased in Canada by 150 per cent between 2020 and 2021, with almost 2,900 cases reported to the federal government last year. The report notes that its tally of Lyme cases may still be low, “because some cases are undetected or unreported.”

The most common sign of Lyme disease is an expanding skin rash that typically begins at the site of the tick bite. Other early symptoms include fever, chills, fatigue and headache. If left untreated, the infection can spread to the joints, heart and nervous system.

Justin Wood, CEO of Ontario-based tick-testing organization Geneticks, said tick activity keeps rising. “I think everybody will say they’re seeing more ticks each year,” Wood said in an interview Tuesday. Geneticks' lab has received more than 400 ticks to test in the last six weeks, he said. About 1,600 ticks were sent to the lab throughout the 2021 tick season.

Lloyd agreed: "It's a bad year for ticks," she said.

Ticks can reproduce locally, and new populations of ticks are introduced on migratory animals, typically by hitching rides on birds, Lloyd said. Ticks also travel and spread locally on mammals such as deer or mice.

The Canadian Veterinary Medical Association says on its website that ticks are expanding their range in parts of Canada at a rate of about 46 kilometres per year.

In Ontario, a 2019 University of Ottawa study found that one-third of black-legged ticks in the Ottawa region were carrying Lyme disease.

Manisha Kulkarni, an associate professor with the University of Ottawa who studies ticks and tick-borne illness, said in an interview that over the last five to 10 years, researchers have noticed “a big northward expansion” of black-legged ticks in the Ottawa region.

“Ticks are being detected in more and more locations around the city of Ottawa and closer to areas where people are living, so there’s also more chance of people coming into contact with them,” she said Tuesday. The City of Ottawa reported 180 cases of Lyme disease in 2019, 120 in 2020 and 290 in 2021.

The northward expansion of ticks is also seen in Quebec. McGill University associate biology professor Virginie Millien says the movement of ticks means they can now be found in suburban areas in the southern part of the province where they were not living even five years ago.

About 10 years ago, there were a few locations in Quebec where researchers would find established tick populations, she said, all on the south side of the St. Lawrence River.

“Now they have crossed the river, and the warmer it gets and with more humidity … the conditions are perfect for ticks,” Millien said Monday. “In southern Quebec, they’re now pretty much everywhere. Including in my backyard."

In Nova Scotia, ticks can be anywhere, but they are most populous in the South Shore and Annapolis Valley regions. They are also frequently found in Halifax and the surrounding areas. Researchers collecting and sampling black-legged ticks found that in Nova Scotia, 30 to 50 per cent of them carry Lyme disease.

In order to keep Lyme disease manageable for Canadians who may be infected, Lloyd would like to see ramped-up Lyme disease testing offered in the health system. Early detection and treatment can dramatically improve disease outcome, she said.

In North America ticks are

In North America ticks are responsible for 75% of vector-borne diseases, 82% of which are Lyme yet it is the mosquito-borne diseases that grab most of the headlines. In Nova Scotia Lyme is more common than all our other reportable diseases combined, including seasonal influenza when 90% under-detection is factored in That is because our elected representatives keep listening to the same conflicted advisors with their close links and ties with the long-term disability insurance industry that red-flagged Lyme as being too expensive to treat, mis-categorized it as a minor nuisance disease and wants nothing to do with complex disseminated or long-Lyme. Where there is a stalemate with serious medical and scientific disagreement politicians should assemble a non-partisan committee to hear presentations from both sides and proceed to make sure that going forward decisions are made based on science all the evidence. What has been presented in the past has been seriously pruned of all evidence that contradicts dogma. The problem goes right to the top of the Public Health Agency of Canada which failed to produce a made-in-Canada set of Lyme disease guidelines as mandated by the Act that brought about the 2016 Conference to Develop a Federal Framework on Lyme Disease. Unnamed officials, without transparency or collaboration produced a status quo report that handed the problem and money back to the same group of infectious disease doctors and public health officials responsible for the situation. So far the ticks are winning yet this is a war can't afford to lose.

I got Lyme disease back in

I got Lyme disease back in 2006 in the area of the Ottawa Valley, north of Kingston. Doctors in Perth had never seen the 'bulls eye' (erythema migrans) except in photos. Not sure what to do, they told me to get in touch with my doctor when I returned to Toronto. Family drove me back as I was in no condition to drive.
By the time I received the doxycycline prescription, many Lyme experts said it was already too late. The tropical disease expert in Toronto at the time was known for not supporting the fact that Lyme disease or syndrome even existed in Canada. The Ministry of Transportation in Canada was in charge of Lyme disease via tick travel. When I received a call from their office in Kingston, they would not believe me or the doctors. By then, Lyme disease had become a political football in the U.S. with the IDSA the driving force.
Members of the IDSA at that time had ties to pharmaceutical companies, insurance companies, etc. and as we all know, nothing was done. ILIADS eventually formed as a more secure source for Lyme disease information but as they have little clout - nothing changes. (Canada follows the IDSA guidelines).
Back in Europe, tick-borne diseases were as common as any insect bite. And still nothing happens here. By 2022 we acknowledge that Lyme disease exists but no one talks about the ramifications - the resultant debilitating lives, Lyme arthritis, memory loss, vocal chord damage, stenosis, auto-immune disorders - the list goes on and on. The tests they use are inaccurate and insurance companies still do not allow coverage. There are many 'centres' in the U.S. that proclaim to cure Lyme but most end up just taking your money and you die anyway.
When I had my first hip replacement surgery, the surgeon mentioned he had never seen a hip like mine, mostly jelly. Upon further communication by my family doctor, it was found it's not that uncommon for someone with Lyme. Family genetics will also play a role in long term Lyme disease. Be proactive. Protect yourself wherever you go, protect your young ones. Keep a close eye around tall grasses and watch for them falling from your favourite tree as they fall off a flying bird.