Give up your dryer — it’s easier than you think

By Becky Rynor | Opinion | June 3rd 2022
#4 of 7 articles from the Special Report: One small thing: Taking action in the climate crisis 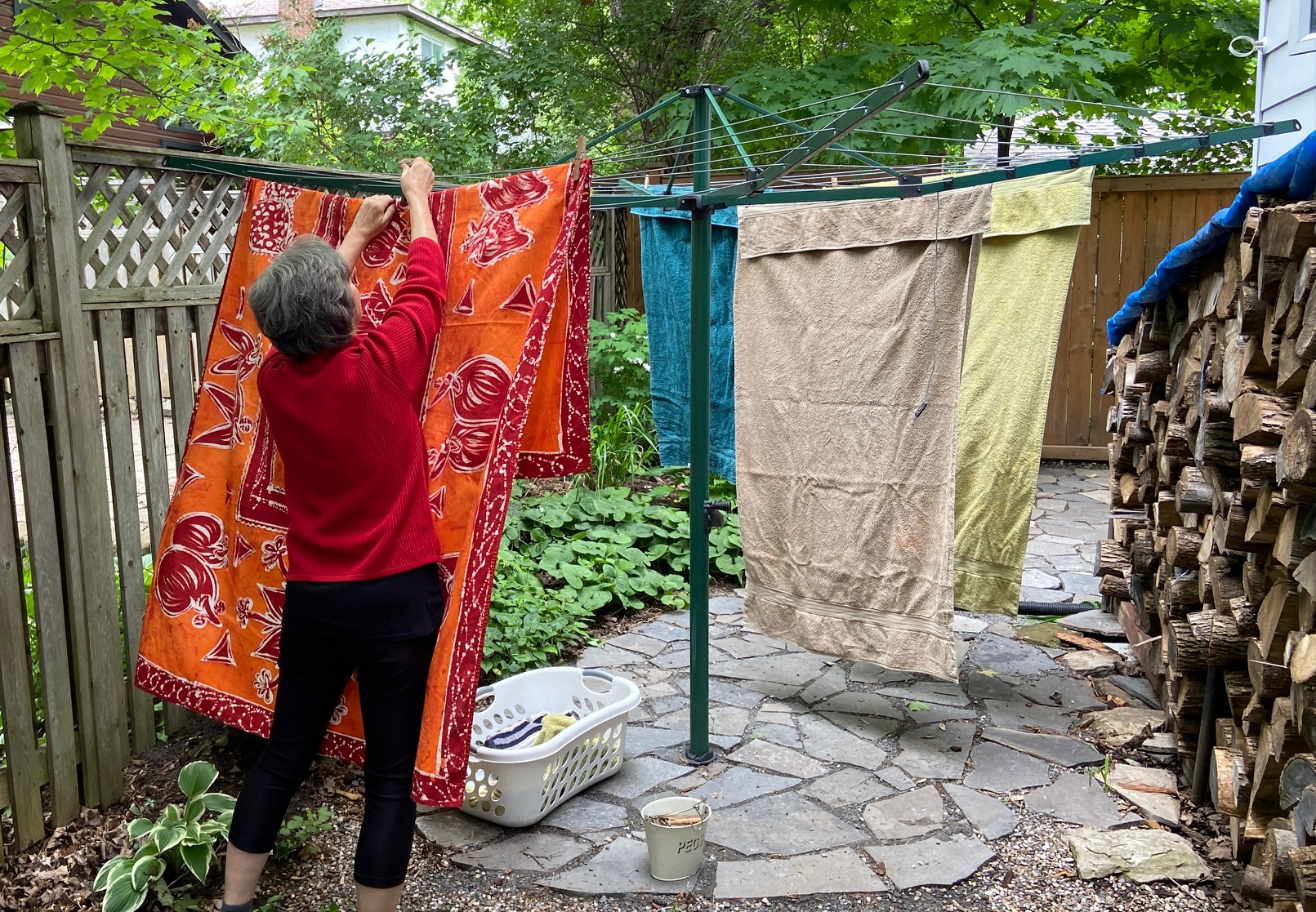 Becky Rynor hangs laundry in her backyard, which she points out isn't large, but can still accommodate a good-sized drying rack. Photo by D. Monet
Previous story

Lenore Fahrig has been dryer-free for over 30 years, “including when our son was small and we had cats and a dog. We even did cloth diapers dryer-free.”

“I guess we’re just kind of cheap,” she laughs. “It costs a lot of money to dry clothes. The air does it for free if you hang them up.”

These numbers apply to Ontario and vary province to province. But compared to other appliances, dryers have not seen any major efficiency improvements in the past couple of decades. “Washers, electric ranges, fridges, dishwashers have all made impressive energy efficiency gains,” he notes. “Dryers have not.”

Dryers are also hard on your clothes — where do you think all that lint comes from? “Any of my good clothes, I would never put in the dryer,” Carlson says. “The longer your clothes last, the more environmentally friendly it is.”

If using a dryer is a necessity, here are his tips for reducing their environmental impact:

“Part of not using a dryer is also owning enough underwear,” Fahrig advises. She further recommends giving things “a good shake” before hanging for fewer wrinkles.

Here are some other suggestions:

Like Fahrig, I have been without a dryer since mine conked out in 1998. I have discovered the world is divided between people who love or hate “crunchy towels”. Air-dried towels will be crisper, but Fahrig says she prefers them that way. “I feel they dry you better when they’re a bit crispy.”

Thanks for sharing this good

Thanks for sharing this good practice, Becky. I've been doing this since 1979 when we bought our first house. Money was tight. Remember 12 to 20 per cent mortgage interest rates? I never stopped avoiding the dryer for all the reasons you have given. It also adds much needed moisture to the air in the winter.

We gave up the dryer 5 years

We gave up the dryer 5 years ago. I love the smell of clothes that have been dried outside.

This year, our goal for 2022 is to reduce our energy usage. So far, we’ve reduced our monthly hydro usage by 75%. One thing we do is put excess hot water from boiling the kettle into a thermos, so we don’t re-boil water when making hot drinks throughout the day. It’s amazing how making small changes like this adds up to significant savings.

Fine if you have a back yard.

Fine if you have a back yard.

Unfortunately many apartment and condo complexes don't allow drying laundry on balconies or patios. I'm trying to get the province to override those silly strata bylaws, as they've done in Nova Scotia with their Clothesline Act.

Please consider contacting your MLA if you want to get the Province to override strata bylaws that prohibit laundry drying outside.

A greater concern is

A greater concern is elimination of carbon based electricity production. Where I live, which is near Niagra falls, carbon isn't a big issue. I am concerned that Ford's big victory will garantee expansion of the natural gas plants, The latter is a big concern, I am not too concerned about the $75. Keep in mind the stats given don't seem to account for the fact winter isn't a good outdoor drying time.