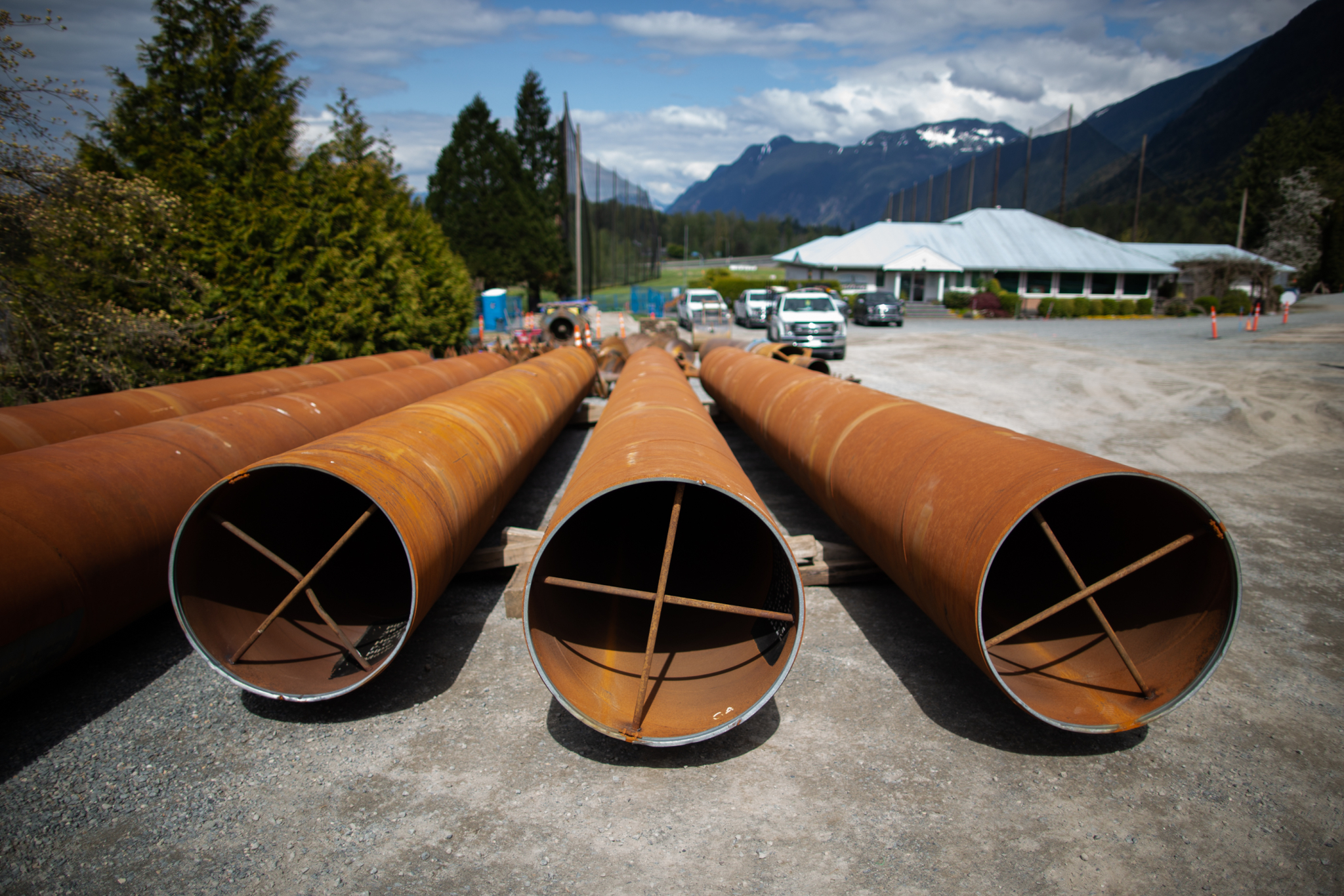 Trans Mountain says a "slight increase" to its current oil spill liabilities plan will be enough to cover the expansion project, but this falls far short of what the regulator requires, says independent economist Robyn Allan. Photo by Jesse Winter
Previous story
Next story

When Trans Mountain's new pipeline and facilities are ready to operate, the company says "a slight increase" to its $1-billion liabilities plan for the existing pipeline will be sufficient to cover the risk of an oil spill on either the current line or its new counterpart.

But “a slight increase” is not in line with the additional $1.1 billion the energy regulator has said is required to open the new pipeline, says independent economist Robyn Allan, who wrote to the regulator with her concerns.

To protect the public interest, companies must show Canada’s Energy Regulator (CER) they've got the financial resources to deal with an oil spill before operating a new pipeline. If a company doesn't have the money to cover those costs and an oil spill occurs, taxpayers could be left to pay for the mess.

In the case of Trans Mountain, the regulator has specified the new pipeline’s “financial assurance plan” must include at least $100 million of cash that can be tapped instantly for cleanup in the event of a spill. The company is also required to carry lines of credit, third-party liability insurance and other financial instruments to cover the remaining $1 billion.

Allan says the company is trying to backtrack on obligations that were clear when the regulatory hearing approved the project, “and in doing so, is putting the public at serious risk for spill costs.

“We really need this, frankly, nonsense to stop,” she adds.

Part of the regulator’s duty is to prevent situations where the public is on the hook for cleanup, says Eugene Kung, a staff lawyer with West Coast Environmental Law. Across Canada, oil and gas companies have declared bankruptcy, abandoned wells and left cleanup costs to the public purse. That’s what we want to avoid here, Kung says.

The expansion’s construction costs have nearly quadrupled compared to Kinder Morgan’s original cost estimate in 2013, which experts say has destroyed the business case for the pipeline. The federal government has said no more public dollars will go towards the project and that it intends to sell the pipeline.

“If we find out at the 11th hour that the private sector won’t insure it, the responsibility will default to Canadians,” says independent economist Robyn Allan. #TMX #OilSpills

To attract private investment, the federal government recently greenlit a $10-billion loan guarantee for Trans Mountain, quietly financed by Canada’s six biggest banks. Technically, no public money has been spent yet, but the guarantee means if Trans Mountain can’t pay back the loan, the public will foot the bill.

If the regulator allows Trans Mountain to avoid adding $1.1 billion in financial assurances for the new pipeline, it could make the project more appealing to prospective buyers, Allan says.

Dropping the requirement to have additional backup cash immediately available, plus lines of credit and insurance, makes it easier for potential buyers, says Kung. “It also leaves them potentially much more exposed to a scenario where ... there could be indefinite liability if they're found at fault for a spill.”

There’s an incentive for Trans Mountain to skimp on the financial assurances plan because money for rising insurance costs and spill preparedness can’t be recouped through the fees oil producers are charged to use the pipelines, he says.

Built in 1953, the existing Trans Mountain pipeline carries 300,000 barrels of oil per day from Edmonton to Burnaby, B.C. The expansion will essentially twin the old 1,150-kilometre pipeline and raise its capacity to 890,000 barrels per day.

The regulator requires Trans Mountain to maintain $500 million in insurance and a $500 million line of credit through Crown corporation Canada Development Investment Corporation for cleanup, remediation, business interruptions and other spill-related costs for the existing pipeline.

Based on the regulator’s 2019 report, Trans Mountain was instructed to come up with an additional $1.1 billion for the expansion project for a total of $2.1 billion for both pipelines, explains Allan.

“It makes sense in a way, right?” says Kung. “If you're doubling the pipelines and, in fact, tripling the capacity then there's a corresponding increase in risk.”

Allan is also concerned Trans Mountain won’t be required to seek insurance for the expansion project until much of it is already in operation.

In January, Trans Mountain signalled its intention to apply to open segments of the expansion project gradually, such as terminals or pump stations. If the request is granted by the regulator, Trans Mountain would be able to skirt a condition requiring the company to file a financial assurances plan — including insurance — six months before applying to open the second pipeline, explains Allan, who was once the president and CEO of the Insurance Corporation of British Columbia.

But Allan’s letter points out it's unlikely the current insurance would extend to the new pipeline and facilities.

When asked specifically if private insurers are willing to back the new pipeline, Trans Mountain media relations wrote the company “has all the required and necessary insurance in place.”

However, the project has had some insurance problems. To date, 17 insurers have cut ties with Trans Mountain. The existing pipeline’s insurance situation has been a black box ever since the regulator granted its request to keep the names of its insurers secret in April 2021.

With the expansion’s consistent cost overruns and new understanding of flood and fire risks, Allan says it's critical to know if the company can obtain private insurance for the second pipeline before opening any part of it.

“If we find out at the 11th hour that the private sector won’t insure it, the responsibility will default to Canadians,” said Allan.

"Allan says the company is

"Allan says the company is trying to backtrack on obligations that were clear when the regulatory hearing approved the project, “and in doing so, is putting the public at serious risk for spill costs."

Hanh. Same thing exactly that KM did. The money needs to be deposited, as cash. Insurers cannot be counted upon to extend coverage indefinitely. Neither can banks.

"When asked specifically if private insurers are willing to back the new pipeline, Trans Mountain media relations wrote the company 'has all the required and necessary insurance in place'.”

I'm reading that as weasel words, because that's almost always what's involved when a yes or no question is answered with wiggle-room in its interpretation. How so? Well, the CER has made requirements. Presumably the banks have also made requirements, but I doubt the taxpayers are off the hook if banks didn't exercise due diligence and are just banking on the federal guarantee: their risk is covered. By us.

So "required and necessary" excludes "required but we-can-get-away-without." Kinda' like in the first situation. And there's no reason to assume that insurance might be transferable, or the line of credit. We can pretty much predict that the taxpayers are on the hook, Mr. T having swallowed the thing whole on our behalf.

Canada needs real regulators, with enforcement capacity, who will act in the public interest. God knows our governments don't seem to be up to the task.

The language these days also seems to speak to both pipelines remaining in operation.

Sleazy government, sleazy regulators, sleazy financers and insurers. No one could claim they're not a good match for one another. Or that it's not a match made in heaven, for TransCanada.

But it IS a slight increase!

But it IS a slight increase! An additional $1.1 billion on top of the existing $1 billion is approximately double--compared to the cost overruns on the pipeline overall, that's slight!

As usual, everyone ignores

As usual, everyone ignores the marine environment with their obsession about a land pipe. There was never a professional, independent risk assessment conducted on this project, least of all on the risk to coastal ecosystems and economies in the event of a spill of up to 750,000 barrels of diluted bitumen, 1/3 of which is a solvent-like diluent.

A moderate -- let alone a major -- spill anywhere in the Salish Sea along the 250+ km contorted shipping lanes between the Westshore Terminal in Vancouver Harbour and the open Pacific will greatly imperil the marine environment and economy. It will create an international incident because Washington State and its coastal population shares hundreds of km of coastline in the Salish Sea with 3.5 million residents of BC's south coast.

The notion of posting a bond to cover the cost of potential large spills has been espoused for years, but to no avail. The bond will have to be big, say $10 billion, to have any meaningful potential to even begin to address the costs of damages, knowing that at best just 15% of oil spilled into the sea -- unlike oil spills on land -- can ever be recovered; it sinks to the seabed and leaches pollutants for a century once the oil-saturated condensate evaporates a few days after doing its own damage in the water and on shore lines.

Alberta will have to be a partner guarantor; after all dilbit is an Alberta product, and there is where the financial benefits accrue beyond the federal tolls on the pipe. None of these benefits will ever cover the full project cost, which could reach $30B before it's completed. Too many prognosticators have provided years of intelligent economic analysis that says so, and not one proponent has been able to respond with proof of a single Asian contract with a refinery willing to pay a premium price for a poor quality product on top of transoceanic shipping costs. The tankers will turn left once they reach open water and deliver their cargo to California refineries paying the same old US "discount" to the discontent of pro-oil lobbyists who fail to join up lousy quality with fair price.

One can imagine another scenario where then feds cancel the project and write off the costs before the liabilities exceed 30 big ones, and puts BC and Washington State (both are major consumers of dilbit from the existing pipe) on notice that they will have to electrify their liquid petrol-burning terrestrial vehicle fleets before the existing 69-year old pipe finally rusts through. BC is already on that course, but the Clean Energy BC Plan has a schedule that is weak. While the feds are at it, why not ban all thermal coal exports from the coast through facilities within Ports Canada jurisdiction? Hip bone-knee bone.

These ideas will have to run the gamut of fossil fuel lobbyists, of course, who have obviously had far more power over government for decades than the electorate ever had in such matters, no matter which party rules. Has that not been the Canadian way since the 1600s with respect to natural resources?

(From an Afrimax oil tanker at 80% capacity, which is the maximum size of tanker and load allowed in Vancouver Harbour.)

Trans Mountain is neither

Trans Mountain is neither economic, nor safe....given that bitumen spills are forever. And as for clean up, ask Alberta land owners how big oil does clean up....in the end, its left for Mother Nature to deal with, over the next few millenniums. Ditto for spills at sea, and there, I can't imagine any amount of insurance making much difference.
We need to transition off this noxious unconventional tar....now.