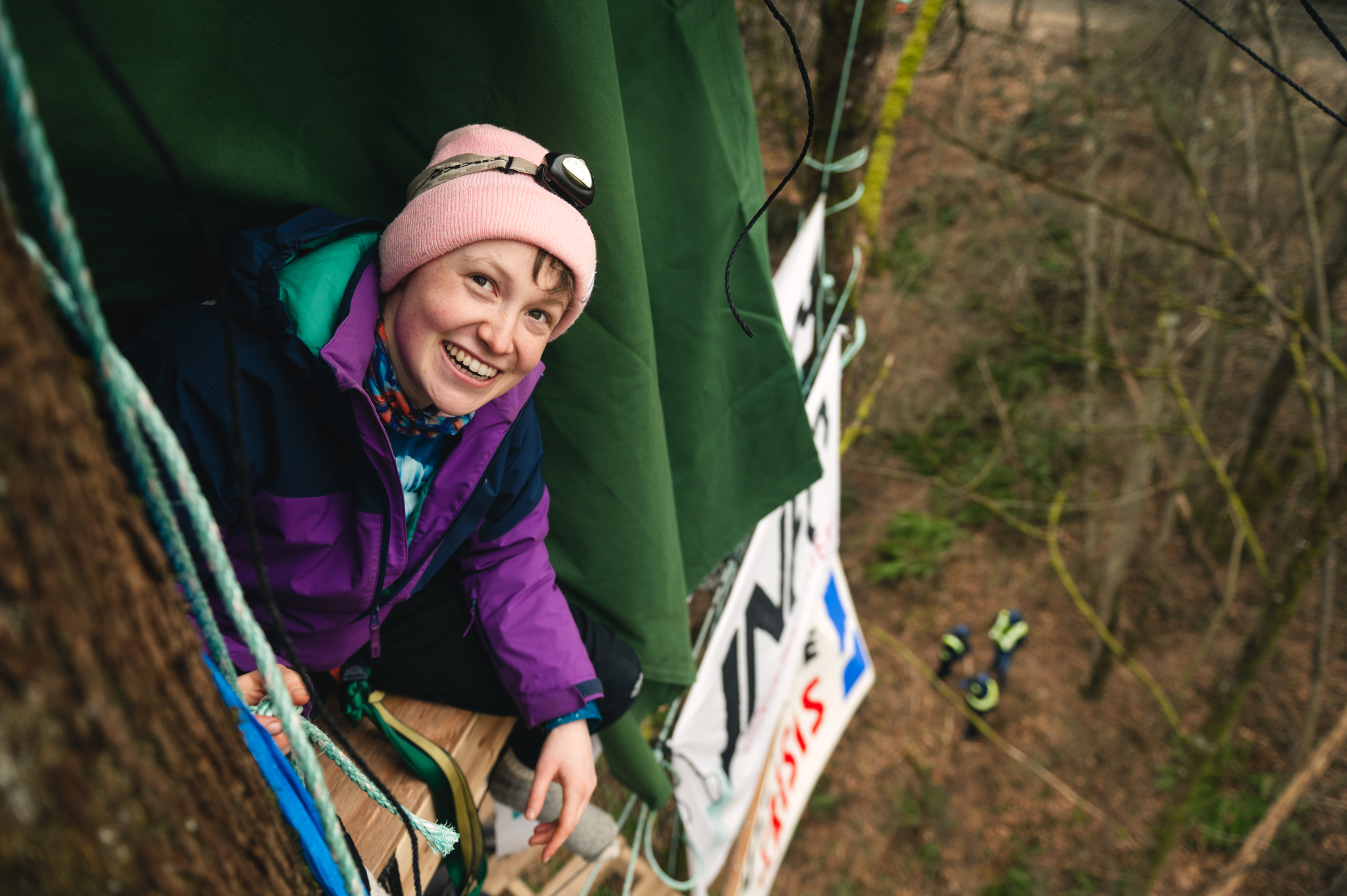 Emily Kelsall spent time on and off for a year in a treesit to protest the Trans Mountain pipeline project. Photo by Ian Harland
Previous story

I was 14 when I heard the government approved Kinder Morgan’s plan to twin the existing 60-year-old Trans Mountain pipeline.

By then, my parents' reassurances that “the government is taking care of it” had long since stopped working for me. This expansion (known as TMX), I learned, would increase the amount of diluted bitumen piped into B.C. from Alberta for eventual export by a staggering 590,000 barrels a day — from 300,000 to 890,000.

I could see the smoke in the air and feel the heat on my skin. So, this news, while disappointing, was not a surprise.

Growing up in the early 2000s, I did all the right things. I was fervent about recycling and turning off the lights. I was told, and believed, that by making small shifts, our society could effortlessly become “green.” As I grew, so did Canada’s emissions. While I was submitting assignments and playing manhunt in school corridors, Canada was approving gas and oil projects. While I held my hand to my heart and belted out O Canada during weekly assemblies, my country was choosing resource extraction over Indigenous sovereignty. While I was decorating my locker, politicians were locking in heat domes and atmospheric rivers.

In high school, I became more politically engaged. I worked with a group called Kids for Climate Action. I campaigned to put climate warning labels on gas pumps. But by the time I was in Grade 12, I started to sense a pattern. I would organize, smile and beg. I spent my spare hours signing online petitions and registering to speak at local council meetings. Adults around me would smile and applaud me for “doing the right thing.” I would go home and smile as well, feeling good about accomplishing something. But then, while I was sleeping or trying to live a normal life with my friends, faceless figures in suits and politicians who are supposed to have my best interests at heart would shake hands and sign papers further condemning me and the people I care about to an unlivable future.

The gradual change that had been preached to me was a lie. By the time I graduated, my faith in Canada — the country I’d once held in such high esteem — was beginning to shake. Perhaps green policies are just a topcoat and what we really need is a complete overhaul of the machine.

UN Secretary General António Guterres recently stated: "Climate activists are sometimes depicted as dangerous radicals, but the truly dangerous radicals are the countries that are increasing the production of fossil fuels. Investing in new fossil fuel infrastructure is moral and economic madness.”

As I grew from a teenager into a young adult, I began to seek out people who weren’t peddling incremental adjustments but instead preaching radical change.

At an Extinction Rebellion rally in 2021, I heard about a treesit in Burnaby that needed volunteers. Its primary goal was to occupy space needed to build the TMX pipeline, thus delaying and eventually halting construction. Other direct actions at the Ironworkers Memorial Bridge and Camp Cloud at the Burnaby Mountain tank farm also caught my eye, so I signed up hoping to make progress where my government had failed. My contacts in the environmental activist community led me to Timothée Govare, somewhat of a figurehead in the Burnaby movement. Despite his air of the quintessential good-natured Québécois outdoorsman, Timothée’s trust was not easily won. He requested I submit personal references before I actually visited the tree.

"While I was decorating my locker, politicians were locking in heat domes and atmospheric rivers." Diary of #activist Emily Kelsall, who spent a year on and off in a treesit protesting #TransMountainPipelineExpansion. #TMX #ClimateCrisis

A couple weeks later, Timothée called me and instructed me to go to the Denny's parking lot close to Burnaby’s Lougheed Mall at 8 p.m., where someone would meet me. I was told to dress warmly but in clothing I could run in.

When I first heard the cryptic instructions, I laughed. I told Timothée the whole thing sounded like a spy movie. Turns out, that wasn’t an inaccurate evaluation.

Amanda Hehner, a 32-year-old nursing student, and my ferryman to the shores of civil disobedience, met me outside Denny’s. When I asked Amanda why she had become involved, she replied: “A deep sense of inequity and urgency around climate change,” she told me, “as well as this really particular skill set that I have … climbing and rope descents.”

Amanda then began leading me to the treehouse. We made our way down the street and passed underneath a bridge where Amanda told me about the different categories of law enforcement I could run into. There was TMX security, who wielded flashlights but couldn’t make an arrest. The nearby railways were monitored by a U.S.-based group called the BNSF (Burlington North and Sante Fe Railway) Police. According to legend, no one has paid a BNSF fine. Ever. Then there was the RCMP: the Royal Canadian Mounted Police, which represents federal interests, and since the federal government is very interested in building this pipeline, the RCMP is very interested in arresting us.

As we made our way along the littered edge of a highway, Amanda warned me to keep my head down. “The RCMP like to do drivebys,” she told me.

That was the moment things changed for me. Up until then, I had assumed Timothée and Amanda were simply involved in friendly neighbourhood activism. But being monitored and chased by the RCMP? I wondered how deeply the Canadian government is opposed to environmental activism. How far would it go to protect the oil and gas industry?

Suddenly, Amanda made a sharp right turn into the woods. I followed her heels through the silhouetted canopy. When I sensed we were getting close to our destination, I began to search for a structure somewhere in the trees with a ladder and pulley.

But Amanda was pointing up, much higher than I imagined.

The instant I saw the treesit, I was in awe.

I’d underestimated the imagination, passion and drive of everyone involved.

What an excellent start. When

What an excellent start. When will we be able to read your next “chapter?”

I think Emily's trajectory on

I think Emily's trajectory on this existential topic is one many people share as far as the government's role goes, but I applaud her courage in translating that into such "arresting" activism. Using the trees is brilliant, period, and the old growth topic even BEING an issue is particularly surprising and disappointing in "super, natural British Columbia" where so many of us have walked through the utter majesty of Cathedral Grove.
Good job Emily and many thanks from the rest of us.