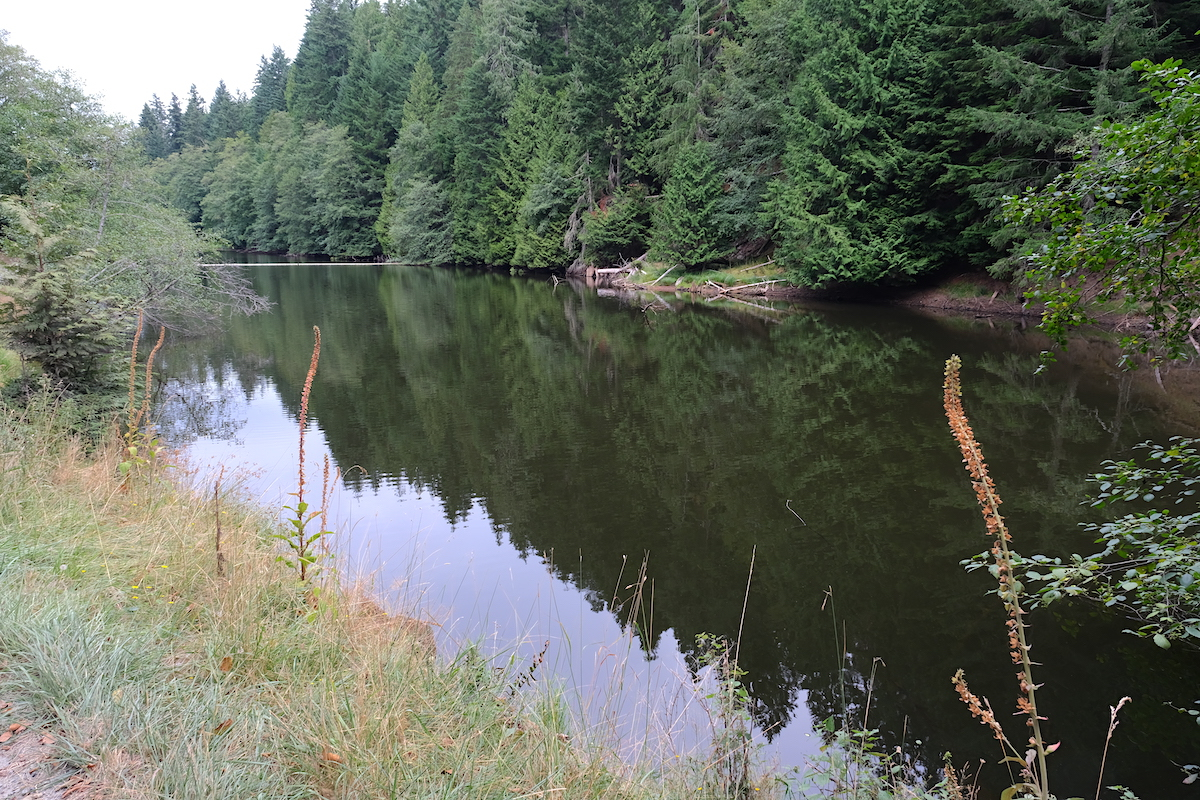 The Nature Trust of B.C. has purchased 143.5 acres for the Money Creek conservation area on the southwest corner of Saturna, which falls in the moist maritime Coastal Douglas Fir (CDF) bioclimatic subzone, part of the smallest and rarest of the province’s 16 ecological zones

The new land trust now connects to the Southern Gulf Islands National Park Reserve and other protected areas, resulting in a preserved area that now spans the length of the island, said Lee Middleton, Saturna Island trustee with Islands Trust.

“It’s a beautiful acquisition by the Nature Trust,” Middleton said.

“It creates almost an entirely preserved backbone on the island, which is hugely important from the perspective of watershed and forest health.”

The CDF only covers 0.3 per cent of the province in low elevations on limited sections of the mainland coast, on the Gulf Islands and along the southeastern coast of Vancouver Island.

The bioclimatic zone is poorly protected and largely fragmented because it falls in a heavily developed and populated area of the province, said Jasper Lament, CEO of the Nature Trust of B.C.

“It is an area of conservation concern, and the Nature Trust of B.C. is always on the lookout for opportunities to conserve good chunks of CDF, and this is certainly one of them,” Lament said.

“And it's nice to acquire one that is so large, almost 50 hectares, and that is also contiguous with lands that have been protected by other conservation agencies.”

The protected area has an almost Mediterranean-like climate and includes a mountain slope leading up to Mount Warburton Pike, which has astounding views, Middleton said.

Now, a trail can be established so people can traverse the length of the island and appreciate both mature and young forests, mixed woodlands, riparian areas and pocket wetlands that are crucial for at-risk species in the new conservation area, he said.

“This is a way for our community (to be involved) in doing some meaningful conservation and to allow others to enjoy a very special part of the world.”

The new conservation area is home to animals such as the barn swallow and northern red-legged frog, which are listed under Canada’s Species at Risk Act (SARA), according to the Nature Trust.

The swallows with their forked tails, rusty-orange chest and belly and shiny blue backs migrate to the Gulf Islands from Central and South America to nest and catch insects.

While the swallows hollow out nests in the sandy or muddy bluffs on the island, they’ve adapted over time to build nests under human-made structures, such as the eaves of houses or barns.

“Barn swallows have really been in decline across North America, so it's important to try to protect habitat for them wherever they occur,” Lament said.

The northern red-legged frog, which has been spotted at Money Lake near the new conservation area, is named for the translucent red undersides of its hind legs.

The brownish-black speckled frog ranges up to 10 centimetres in size and frequents wetlands at constant threat of being drained or altered by development or forestry activity.

“The (Money Creek area) provides that kind of micro-diversity of habitat for different species, which makes the property important,” Lament said.

The Saturna Island land was bought by the trust from the Money family, which acquired it in 1945.

As did the generosity of the Money family, which sold the land well below market value to support the conservation project and compound the ecological value of their past land donations on the island, Lament said.

“I hope that there will be other people coming after me who will enjoy rambles over these lands as much as I have throughout my life, and the restorative energy from being in the woods that these walks give you,” said John Money.

Money and his brother would ramble around Saturna for days at a time, exploring every nook and cranny of the island they loved so well, he said.

“I felt that the Nature Trust of British Columbia was the best way to enshrine these lands and keep the trails maintained for future generations to walk through and enjoy.”

Saturna Island's Money family has always been known to be community-minded. This generosity continues their legacy. Well done, Saturna! Not just for protecting this land in perpetuity, but for setting this example at a time when we really need to be leaving Mother Nature alone to work her carbon-sinking magic.
From a former Penderite.

What a wonderful gift! Such

What a wonderful gift! Such gifts are rare, indeed.

That said, the Coastal Douglas Fir Biogeoclimatic Zone is not itself rare.

True, only a small piece of its northern extent exists in BC: the various US and State Forest Services use different eco-classification systems, but the CDF zone can be said to extend into California, the ecosystem occurring at higher elevations the further south it goes. Much of Canada’s CDF has been converted to non-forest uses, and what’s left of the virgin or natural ecosystems has become proportionately very small (which makes any preservation very important), but the zone itself is at least as abundant as it ever was—and, with global warming, it will probably get bigger as the driest subzones of the Coastal Western Hemlock BCG Zone lose many of its defining species to year-over-year drought and climate warming—in effect, the driest CWH subzones becoming the moistest CDF subzones.

This process is already starkly under way on the Gulf Islands: hemlocks which used to be a common niche or under storey species in the CDF are becoming very rare. On the 4K-hectare Island where I live, classically CDF, we started seeing hemlock mortality kick into high gear about 25 years ago: about a million codominant hemlocks perished annually in those first years. Of course that rate tapered off as individuals winked-out over the decades. There are hardly any hemlock left in codominant canopy position, certainly none dominant, and most of the understory hemlock—which are shallow-rooted—have died of year-over-year drought years ago. Another metric is the persistence of Doug fir saplings in deep canopy shade: the CDF is defined by Doug fir regenerating in the shade of the understory, whereas it does not in the CWH: Doug fir only persists and grows in shade where the climate is dry.

This process of hemlock mortality is underway to a lesser extent in the driest CWH subzones —along the interface with the CDF Zone—that is, CDF is encroaching into former CWH which, conversely, is giving ground to the CDF

My neighbours are recently alarmed at all the dead trees around here, seemingly all of a sudden. For the most part, these are Grand firs (true firs, not Douglas fir) whose foliage turns bright scarlet when dying and are thus very visible in the forest canopy. However, since hemlock foliage turns grey and falls off quickly, dead and dying trees are harder to see in a forested vista. My neighbours simply assume what they’re seeing is a sudden harbinger when, in fact, dying Grand firs are simply the latest phase of drought mortality which started as a ‘hemlock phase’ decades ago—just not as visibly.

The CDF is the only Coastal BCG Zone where wildfire is a significant ecological factor: Doug fir—especially old trees with thick, corky bark—survives wildfire. On my Island there’s evidence that indigenous people intentionally set the woods on fire to clear out thick understorey brush (remember, Doug fir saplings persist in the shade and can get thick as “dog hair”) in order to encourage fresh growth which deer can access for food, and to improve game hunting. Also, prescribed burns like this are done in a controlled fashion which, ultimately, reduces the risk of wildfire in a season when it can’t be controlled. Because virgin CDF ecosystems are so rare (not the zone, itself), most people would find it counterintuitive to allow these remnants to burn; but without periodic burning, forest ecosystems evolved to endure fire become something other than natural. (The pine-beetle kill in the Interior got a massive as it did—almost the size of Vancouver Island—because humans suppressed wildfire for a century, allowing pine stands which are single-aged (Lodgepole cannot grow in shade) to cover areas much bigger than wildfire would have otherwise allowed, and to reach the optimal age (about 80 years+) for bark beetles to attack, and do it all at once, the combination resulting in a huge outbreak.)

Sediment cores of local lake-bottoms in the CDF show that, 5,000 years ago (only four or five generations of the oldest, typical trees), Ponderosa pine was a common species in what is now the CDF. That was more like the Interior Douglas Fir Zone—or even the wettest subzones of the Ponderosa Pine/Bunch Grass Zone— are like today. With increased climatic warming, the driest CDF subzones will probably become something more like either of these two Interior BCG Zones—although the present interface, the Fraser Canyon, is very short. Fortunately for commercial forest management, Doug fir, the most desirable species (for many reasons) is well-adapted to these drier environments.

At present, the BC Forest service allows the regeneration of tree species from drier climes only in discrete, experimental situations on Crown land, but on wholly private land (such as in the E&N Land Grant on eastern Vancouver Island where private lands are not rolled into licenses where BCFS standards must be met), a number of exotic stands such as redwood and pine species have been successfully established. But the problem is that the climate is changing a rate faster than the span of a single rotation of commercial forest tree species. What, then, is the most appropriate species to regenerate an given area? Climate change is upsetting lots of applecarts —including the protection of old-growth stands from insect and wildfire risks that have been elevated because of climate warming.

Finally: the CDF itself is not “rare”—indeed, it is expanding because of climate change. What’s rare, more correctly, is virgin CDF old-growth because the zone was always small in Canada (at its northern extent), and is typically located on subdued terrain suitable for non-forest development: houses, cities, farms, &c.