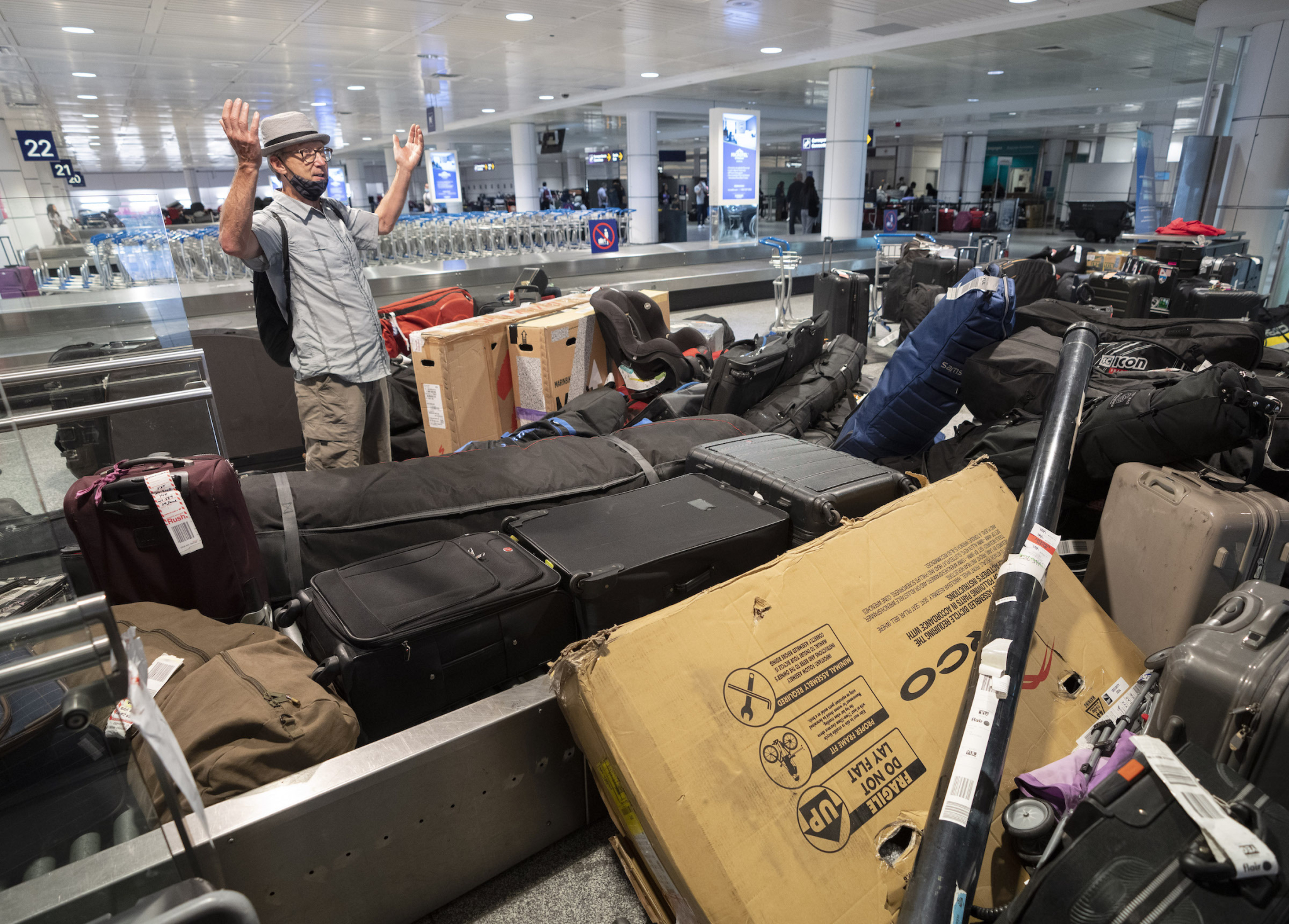 Jacques Bernier looks for his bicycle among a pile of unclaimed baggage at Pierre Elliott Trudeau airport in Montreal on Wednesday, June 29, 2022. THE CANADIAN PRESS/Ryan Remiorz
Previous story

In an age of widespread polarization, everyone can at least agree on one thing right now: travelling absolutely sucks.

While rising gas prices are making summer road trips far less enjoyable, trying to board an airplane in Canada right now would test the patience of the Dalai Lama. From delayed flights to excruciatingly long lines, lost luggage and even passengers being forced to sleep on the ground at the airport, the experience of air travel is about as miserable as it’s ever been — and that’s saying something.

To hear it from some people, this is all Justin Trudeau’s fault. That’s certainly been the conclusion Canada’s conservative politicians and pundits are trying to get people to draw. “Hold this government accountable for their leading role in the service failures, extended restrictions and inaction that led to our airport chaos,” Conservative MP and transportation critic Melissa Lantsman tweeted.

In a video last Friday, Toronto Sun columnist Brian Lilley, also tried to pin the country’s airport woes on the federal government, using one day of data from last week to argue Canada has the “most delayed” airports in the world. For what it’s worth, FlightAware data showed only two Canadian airports among the top 30 most delayed in the world on Sunday, and three out of the top 40.

Still, the numbers don’t lie: Canada’s airports are badly bogged down and backed up. But while it might be tempting to blame Ottawa, the real culprits here are broader trends in both airport staffing and resurgent COVID case counts.

After all, Air Canada cut its summer schedule by more than 9,000 flights, and Delta, Lufthansa, British Airways and several other airlines have also scrapped flights by the hundreds over the last few months.

Yes, our federal government seems to have been caught off-guard by the surge in travel and the failure of the airports it regulates to staff up appropriately, but the airlines are in the day-to-day business of getting people to their destination. If an airline is disproportionately bad at that — and the data clearly shows Air Canada is — that might be where the blame belongs.

Over the last month, Air Canada and WestJet have been the two worst performers in North America when it comes to being on time. While Delta and Alaska Airlines were able to land more than 80 per cent of their flights on schedule during that period, WestJet and Air Canada could only manage 54 per cent and 38 per cent.

The inability to connect the dots between staffing shortages for both airports and airlines and the ongoing (and now resurgent) pandemic is also a factor. According to Skift, a travel industry website, 15 per cent of planned summer flights in the United States have already been cut through August — and that’s before you factor in the latest wave of COVID-19 and its impact on employee absenteeism.

Given the seven-day average test positivity rate in the United States recently eclipsed 15 per cent for the first time since Feb. 3, that impact could be considerable.

Opinion: While it’s tempting for some to believe that governments are the cause of, and solution to, all of life’s recent problems, the truth is more complicated than that, writes columnist @maxfawcett. #AirTravel #COVID

If it is, it will be the latest in a growing set of data points showing the high cost of lifting mask and vaccine mandates prematurely. Passengers on the April 19 Delta flight who famously celebrated the mid-air announcement that masks were no longer required may have just been cheering a short-lived pyrrhic victory. If anything, the premature lifting of COVID-19 mandates may have made the summer travel crunch worse, given it potentially increased the demand for flights while simultaneously impairing the industry’s ability to staff them properly.

What could governments actually do here? In the near term, not very much. Our federal government just removed the vaccine mandate on air and train travel, and reversing course on that so quickly would be a major political own-goal. In America, the idea of a new federal vaccine mandate ahead of the November congressional midterms is about as unlikely as Donald Trump endorsing Joe Biden.

On the staffing front, it takes months to hire and properly train the staff needed in North America’s airports, and with unemployment rates near generational lows, that’s unlikely to be an easy task. They have a lot of hiring to do, too. According to Oxford Economics, there were 2.3 million fewer people working in aviation worldwide last September compared to the beginning of the pandemic.

In the meantime, the rest of us would do well to remember Canada isn’t an island unto itself, and no act of government can shield us from the same trends and realities that have backed up airports in Europe, the United Kingdom and the United States. As with inflation, we’re no different than the rest of the global community — and no less susceptible to the ongoing fallout from the COVID-19 pandemic.

While it’s tempting for some to believe that governments are the cause of, and solution to, all of life’s recent problems, the truth is more complicated than that.

Finally someone in the media

Finally someone in the media really talking some sense here. Thank you for this. I for one have even stopped taking the train. Although the mask mandates are there, people will push the boundary on that and keep their mask off for the entire 20 minutes it takes to sip their coffee. All while inside a crowded constrained space.

I agree - people need to

I agree - people need to think about what they wish for. There are consequences for actions and the airlines need to do better in terms of managing numbers and planning for short staffing; people need to understand the pandemic is not over and they need to take responsibility for their own safety. The protests against the government clearly show that some individuals are more interested in their own needs than the collective well-being. We're on our own folks! We can't have our cake and eat it too!

Good article with good links, especially the on the covid variants.
The blaming thing is always front and centre with conservatives of course since cultivating the worst traits of human nature seems to be their trademark, but as usual we see glaring contradiction between holding the government accountable for almost EVERYTHING while simultaneously aspiring philosophically and politically to ever smaller government. And their leadership races are distinguished by having a literal horde of candidates who want the inherently contradictory job of further curtailing their own influence. Makes about as much sense as their religious underpinnings....

Blame is a cop-out for any

Blame is a cop-out for any problem. When honest people are punished for being honest it allows the Machiavellian players to party. It begins with all of us being responsible for how and when we use our powers of judgement.

It's easy enough to connect

It's easy enough to connect the dots between booking a flight and actually boarding it. When the latter dot is erased altogether, though, one has to wonder why the airlines even allowed the flight to be booked in the first place if they can't seem to physically schedule it due to staff shortages. Cancelling the flight at the last possible moment after reservation-holding passengers have already arrived at the terminal is a terrible mistake. It seems the recent round of preemptory flight cancellations by Canada's major airlines was too little too late, especially when considering that the majority people are not flying for essential reasons. Pity the ones that are.

With an immune compromised family member and new Omicron variants emerging, the decision to avoid airline travel is an easy one. It's also good for the planet. It's somewhat satisfying to see nightly news clips on selfish, entitled travellers moaning in crowded airports about the unjust denial of their life-affirming week of hedonism in Cancun resorts.