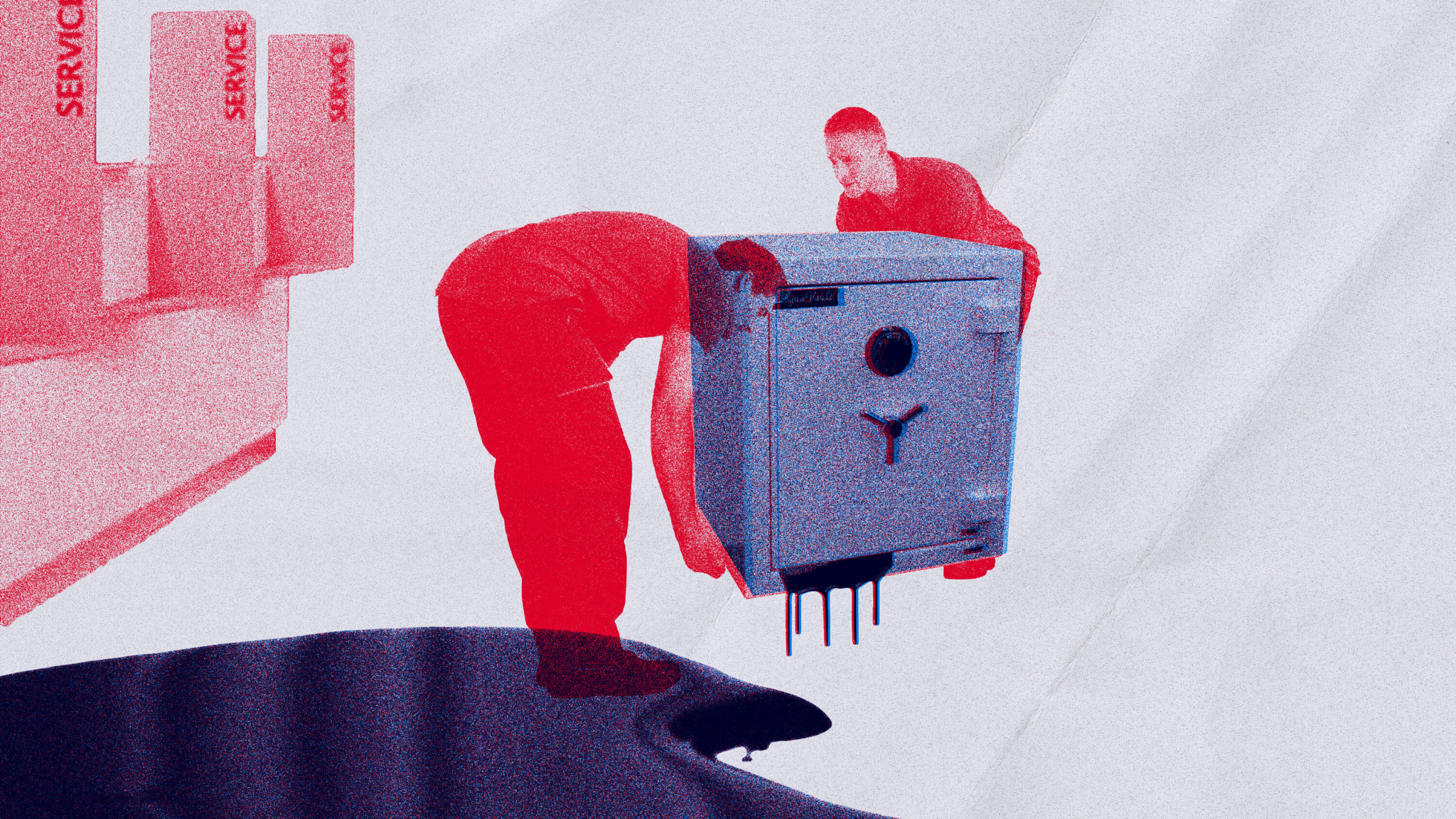 When Jessica Lynn Lefebvre found out TD, the bank she’d been with since university, was the No. 2 funder of fossil fuels in Canada, that was the final straw.

Shortly after, she went through her finances and started making the move to a credit union.

Lefebvre joins a growing number of people fed up with keeping their money in banks that are fuelling the climate crisis. Most Canadians bank with one of the Big 6 — RBC, BMO, CIBC, Scotiabank, TD or the National Bank of Canada. Every one of these financial institutions invests in or lends money to fossil fuel companies whose products create planet-warming greenhouse gases. Since 2015, Canadian banks in general have put $911 billion into the industry, but experts say the opposite needs to happen if we’re going to meet our climate goals.

Because Lefebvre doesn’t “want to be part of that,” she opted instead to take her money to Desjardins. The switch doesn’t mean her financial institution is completely fossil-free — Desjardins still has fossil fuel holdings, though not nearly as many as the Big 6 — but Lefebvre says banking at a credit union gives her more power to push for change.

“As a member, instead of a customer, I feel like I also have more of a voice to say, ‘We need to get out of this.’ And that's something that I want to push for at their annual general meetings and stuff,” she said. (Lefebvre's husband works at Desjardins in member research, meaning he takes stock of members’ experiences at the institution.)

Collective action and pressure from members can lead to change at a credit union, which is what makes these financial institutions different from banks. This year, after pressure from its members, Desjardins announced all 17 of its SocieTerra funds and portfolios are now completely free of fossil fuels. The change took $4.6 billion in investments out of companies that extract or produce oil, gas and coal, as well as companies that build and operate pipelines.

Since launching our Financing Disaster series, we’ve heard from readers who want to know more about switching banks. How do you get your money out? What should you do first? What things are important to consider when you’re making a move? After seeing the amount Canada's biggest financial institutions invest in fossil fuels — especially projects like the Coastal GasLink pipeline, opposed by Wet’suwet’en hereditary chiefs — some are seeking a new home for their money.

Switching banks is a different experience for everyone, and talking with the financial institution where you want to move your money is a good way to get your questions answered.

There's also a middle ground when it comes to making your finances as fossil-free as possible. A lot of Canadian banks — and even some credit unions — either invest in, lend to or have financial products that are linked to fossil fuels. Depending on your needs, the most fossil-free banking options may or may not be the best fit for you, but there are plenty of ways to cut down on your money’s carbon footprint.

We’re not experts ourselves, and this article doesn’t constitute financial advice, but here’s what we learned from financial experts and people who have made the move.

Since launching our Financing Disaster series, we’ve heard from readers who want to know more about switching banks. How do you get your money out? What things are important to consider when you’re making a move? Here's what we found out.

After you’ve made the decision to leave your current bank, you’ll need to decide where you’d like to go. Sites like Bank.Green, a project created in association with finance-tracking non-profit BankTrack and other civil society groups, allows you to look up the fossil fuel involvement of several major Canadian banks. The Canadian Credit Union Association also has a search engine where you can enter your location to see which credit unions are in your area if that seems like the best option for you.

From there, you’ll have to do your own research and ask the bank or credit union you’re considering to give you the details on what they fund. You can set up a meeting with someone from your branch and ask questions. Does the bank invest directly in fossil fuels? Does it offer financial products that invest in fossil fuels? How about financial products that don’t invest in fossil fuels? Protect Our Winters, a group of outdoor enthusiasts advocating for climate action, has a list of specific questions you can ask your bank, such as: Do you have a rule against funding coal mines or power plants? Are your green policies just for the bank or do they apply to the funds on your investment book, too?

Depending on where you live, you might not be able to find an entirely fossil-free bank, but you can compare the bank you’re considering with your old one, and ask similar questions to the above.

Next, take stock of what you have

Once you’ve decided where to move your money, how difficult the change is will depend on the number of accounts and investments you have. If your finances are limited to chequing and savings, making the switch can be as simple as opening a new account and transferring your cash before you break up with your old bank.

For Lefebvre, the most tedious part was going over the bill payments automatically charged to her chequing account each month and contacting companies to let them know about the switch.

If you’re on a monthly payment plan for something like car insurance, you’ll have to talk to your autoplan broker and get the new account information to them. The same goes for expenses like energy bills.

“I have some vacation time in July and we'll probably use that time to close out the accounts just because it's a lot of work,” she said.

As Tim Nash, a financial coach who started Toronto-based Good Investing, points out, it’s probably a good idea to wait a month before closing your old accounts to see if you forgot about any bill payments or transfers.

Making a move gets stickier when it comes to investments because there can be tax concerns and other hurdles. You also want to make sure you’re not just moving your money from one fossil fuel-supporting investment to another. If you have money in fossil fuels through a mutual fund or an exchange-traded fund (ETF), for example, you’ll want to consider not just the bank you’re moving to but which funds they offer.

You’ll also want to be careful about how you move your money — pulling cash out of an investment fund on your own could come back to haunt you at tax time. It’s wise to speak to your new bank or credit union about the best way to transfer your investments.

The same goes for tax-free savings accounts (TFSAs). Even though money held in or withdrawn from a TFSA is generally not taxed, you’re only allowed to contribute so much to your account each year, and switching accounts on your own could lead to financial penalties down the road. According to the federal government, as long as a bank does the transfer on your behalf, you won’t have to pay any taxes for the move.

You’ll also want to talk to your new bank before moving a registered retirement savings plan (RRSP) since someone at your new financial institution will need to do a transfer after you open a new account. Your new bank will likely charge a fee for this but may cover it if you ask. Again, don’t pull your money out on your own — taking cash out of a RRSP too soon could mean tax penalties.

Mortgages and other debt

Moving a mortgage from one bank to another can be tricky and cost extra money, depending on when you do it. You can break your mortgage by changing banks before your renewal date, but that means you’ll need to pay a fee to the bank you’re leaving.

Alternatively, you can wait for your term to run out and prepare to make the switch then. Some credit unions and banks offer financial incentives if you move a mortgage — money that could help cover penalties or legal fees.

Debt such as credit cards or lines of credit can also be more difficult to move over. If you really want to shift all of your money at once, you can go to your new bank, show them the debt you have and ask if they’ll lend you the money to pay it off at your current bank, said Jonathan Fowlie, who leads Vancity's external relations and impact strategy. That effectively transfers the debt over to your new institution. But that only works if you get approved for the loan and it might not be worth it, depending on your situation.

Many people switching banks choose to keep sticky things like debt or mortgages at their old institution until the timing is right, said Fowlie. This might mean keeping your credit card and paying it off gradually, for example, he explained, while shifting your chequing and savings accounts to your new bank to use for transactions and other payments. It’s recommended to speak to a financial adviser about how best to approach your debt.

The highs and lows of credit unions

When people look to move from one of the Big 6, they often opt for a credit union. That’s in part because these financial institutions answer to their members — the people who bank with them — rather than the shareholders who hold sway over the Big 6. Credit unions also have less money than big banks, which means they’re less likely to lend sizable amounts to big fossil fuel companies.

However, that doesn’t mean their money will be entirely out of fossil fuels, and banking with a smaller financial institution can have its drawbacks. Major players like Desjardins, Coast Capital and Vancity — which does not invest in fossil fuels — offer a similar array of services as most major banks, but smaller credit unions may not. If your local credit union doesn't invest in oil and gas companies, for example, but also doesn't offer decent online banking, your best move might be to find a financial institution that still has some fossil fuel ties but also provides the services you need.

Ultimately, no one can make that decision but you.

I need to find a new credit

For decades, I've had a mastercard, because back then, it supported the long-ago and much-mourned Ottawa Women's Credit Union. Then that was bought out by my national credit union, and the m/c still supported them.

Now it's just a regular bank master card, and I want out.