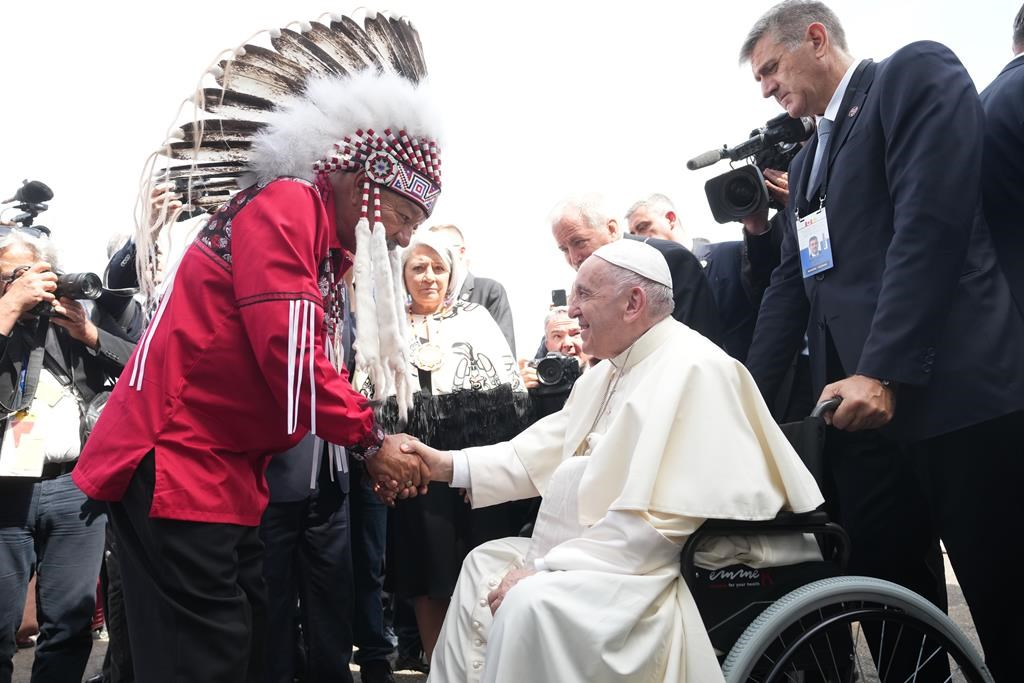 Pope Francis is greeted by George Arcand, Grand Chief of the Confederacy of Treaty Six First Nations, as he arrives in Edmonton on Sunday, July 24, 2022. THE CANADIAN PRESS/Nathan Denette
Previous story

MASKWACIS — Pope Francis says he is sorry for the Roman Catholic Church's role in the cultural destruction and forced assimilation of Indigenous people, which culminated in residential schools.

Tears streamed down the faces of elders and survivors as Francis apologized Monday in Maskwacis, Alta., south of Edmonton, after visiting the site of the former Ermineskin Indian Residential School.

"In the face of this deplorable evil, the church kneels before God and implores his forgiveness for the sins of her children … I humbly beg forgiveness for the evil committed by so many Christians against the Indigenous Peoples," Francis said through a translator at the community's powwow grounds.

He received applause from many in the crowd of thousands as he said he felt sorrow, indignation and shame. Others sat in contemplation with their eyes closed when the pontiff said the actions of the church were a "disastrous error incompatible with the gospel of Jesus Christ."

Francis asked for forgiveness, in particular, for "the ways in which many members of the church and of religious communities co-operated, not least through their indifference, in projects of cultural destruction and forced assimilation promoted by the governments of that time, which culminated in the system of residential schools."

Francis spoke in Spanish, his first language, and it was translated into English by a priest. Translations were also available in several Indigenous languages.

He said begging forgiveness is the first step and there must be a serious investigation into what took place. Francis also called the overall effects of the policies linked to residential schools "catastrophic."

She had given the children's moccasins to the Pope when an Indigenous delegation visited Rome earlier this year. They were meant to represent children who never came home from residential schools and she had told the pontiff she expected him to return them when he came to apologize on Canadian soil.

An estimated 150,000 Indigenous children were forced to attend residential schools in Canada, where neglect and physical and sexual abuse were rampant. More than 60 per cent of the schools were run by the Catholic Church.

Tears streamed down the faces of elders and survivors as Pope Francis apologized Monday in Maskwacis, Alta., south of Edmonton, after visiting the site of the former Ermineskin Indian Residential School.

Eileen Clearsky from Waywayseecappo First Nation in Manitoba held photos of her mother and father during the apology. She said she wanted to honour her parents, who were both survivors, and to find healing for her family.

"It’s been a long journey to find out who we are because of the legacy that residential school has left behind for us to deal with," Clearsky said.

Chief Wilton Littlechild presented Francis with a headdress. The former member of the Truth and Reconciliation Commission attended residential schools for 14 years as a child in Alberta.

Littlechild said he hopes the Pope's visit furthers a pathway of justice, healing, reconciliation and hope.

"We sincerely hope that our encounter this morning and the words you share with us will echo the true healing and real hope for generations to come," he said.

Earlier in the day, Francis held his own face as he was brought in a wheelchair to a graveyard in Maskwacis. Organizers said there are likely remains of residential school students among the graves.

The Ermineskin school was one of the largest residential schools in the country. Five teepees were set up at the location for the Pope's visit — four representing the nations of the land and the fifth as symbol of the entrance to the former school.

Organizers said sacred fires were also burning in communities throughout the country in solidarity.

Prime Minister Justin Trudeau and Gov. Gen. Mary May Simon, as well as other political and Indigenous leaders, were at the event.

Francis was set to speak later Monday with Indigenous Peoples and parish members at the Church of Sacred Heart in Edmonton.

Later in the week, the Pope is scheduled to host a large outdoor mass at the city's football stadium and take part in a pilgrimage in nearby Lac Ste. Anne, before travelling to Quebec City and Iqaluit.

This report by The Canadian Press was first published July 25, 2022.

— With files from Kelly Geraldine Malone in Winnipeg

Why does the pope refer to

Why does the pope refer to Christians rather than Roman Catholics? Is he apologizing on behalf of the United Church and the Anglican Church, both of which have not only apologized many years ago but have also lived up to their financial commitments as opposed to the Catholic church which continues to shirk their responsibilities.

I am glad this Pope has

I am glad this Pope has apologized but I would really like to know how the people who inflicted these horrors could be considered Christians. As far as I can see they did not follow Christ’s two basic rules: Love your neighbour as yourself and Do unto to others what you would have them do unto you. He also said )Whatever you do to the least of these you do unto me’. Not that I am saying indigenous people are *least*. I belong to no religious group and think that religions have been used and continue to be used to justify deeds and policies that are unjustifiable. We are all citizens of the world and are interconnected no matter our race, colour, ethnicity etc.