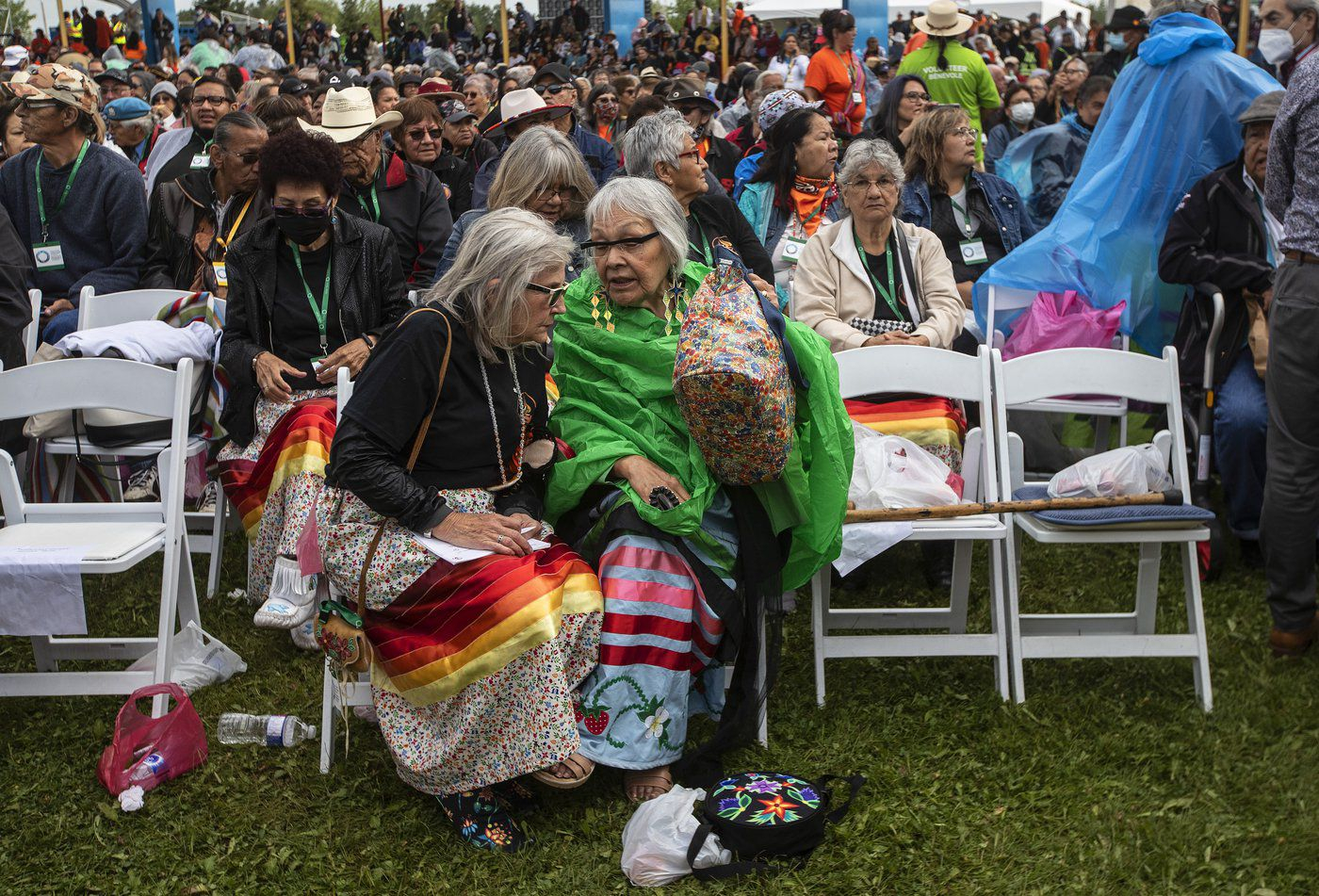 Indigenous people gather to see Pope Francis on his visit to Maskwacis, Alta. during his papal visit across Canada on Monday, July 25, 2022. Photo by The Canadian Press/Jason Franson
Previous story

Pope Francis delivered on Monday an apology for the Roman Catholic Church's role in residential schools, saying many Christians supported the colonization of Indigenous people. He made the remarks at the former site of the Ermineskin Indian Residential School in community of Maskwacis, south of Edmonton.

Here is some of the reaction to the historic apology:

"Pope Francis’s words today and in Rome this spring represent a journey that has taken more than 180 years — from the time the doors of these so-called schools opened to the challenges First Nations people live today. By apologizing for the abuses of the past, Pope Francis has helped to open the door for survivors and their families to walk together with the church for a present and future of forgiveness and healing. I accept and choose this path." — Former Assembly of First Nations Chief Phil Fontaine, who attended two Manitoba residential schools

"Every survivor will choose how they feel about the apology. We have witnessed the Pope's response to the Truth and Reconciliation Commission's Call to Action No. 58 — and heard a message of hope to our people, Canadians, and Catholics worldwide: First Nations cultures, languages, and traditions matter. This message will help to guide us all on the path to reconciliation." — AFN Regional Chief Cindy Woodhouse

"It has been over a year since discovering over a thousand unmarked graves of children on Indian Residential School grounds, and we are still mourning them. An apology does not ease the pain of lost children who never returned home, or the legacy First Nations carry as the Survivors, their children and their grandchildren. However, we encourage the Church to move forward in the spirit of reconciliation by making concrete commitments and true reparations going forward." — Cornell McLean, acting grand chief of the Assembly of Manitoba Chiefs

"The Holy Father's apology will lift some of the darkness which the Indian residential school experience represents. The missing children will be acknowledged with utmost respect and care following their families' wishes, as each circumstance requires." — Elder Harvey Nepinak, residential school survivor, who watched the apology from Dauphin, Man.

"It triggered an opening of a wound again. And this wound that has been opened again, we can't just leave it like that. We really have to take the steps to make sure that we help heal and recover our people. ... You can't just say 'sorry' and walk away. There has to be effort, there has to be work and more meaningful action." — Chief Tony Alexis, Alexis Nakota Sioux Nation.

"I had my ups and downs, my hoorays, my disappointments, my wanting more and not getting it. I've waited 50 years for this apology and finally today I heard it. And unfortunately a lot of my family members, friends, classmates and members of my community who went to residential school were not able to hear it, because they had passed on through suicide, alcohol addiction . and other substance abuse or what not because they could not live with the trauma that they endured in these residential schools." — Evelyn Korkmaz, survivor of the St. Anne's Indian Residential School in Fort Albany, Ont.

"I felt the apology to be sincere. I felt the Pope really did some homework. He dug in and made it as meaningful as he can." — Chief Greg Desjarlais, Frog Lake First Nation.

"This historic moment would not have been possible without the advocacy and perseverance of First Nations, Inuit, and Métis Survivors. Today is about you, and about all of the children who were taken from their families and robbed of their childhoods." — Prime Minister Justin Trudeau.

Today in Maskwacîs, Pope Francis recognized the abuses suffered in church-operated residential schools – where more than 150,000 Indigenous children were forced to assimilate and lose their languages, cultures, spiritualities, traditions, and identities. pic.twitter.com/ZwUm9k2hdH

“What you heard from survivors leading up to this was the hope for that important statement of apology but not as a finality in and of itself and not as a symbolic gesture. The quality and sufficiency of that apology will be judged by survivors and Canada will stand by those survivors. Clearly what we’ve heard is that it has to be the beginning and not the end.” — Crown-Indigenous Relations Minister Marc Miller.

“The government policy of residential schools, in which the churches participated, created deep wounds that are not easily or quickly healed. Yet we saw at Maskwacis both the resilience of Indigenous Peoples in preserving their culture, as well as the goodwill of Catholics and other Canadians to both truth and reconciliation." — Alberta Premier Jason Kenney

"The Catholic Church and the government worked together in harms and crimes, and they must work together to ensure that the harm done to Indigenous peoples is being addressed in meaningful ways. Co-operating with ongoing investigations and making all documents requested by survivors, police and local governments available is the very least that the Church and the federal government can do for Indigenous peoples." — Federal NDP Crown-Indigenous Relations critic Lori Idlout

“This a significant first step towards reconciliation and acknowledging the intergenerational trauma residential schools have had on Indigenous peoples across Turtle Island. After failed attempts and a lack of will, it’s time the Catholic Church make the investments needed to help ensure individuals and communities can heal.” — Congress of Aboriginal Peoples National Chief Elmer St. Pierre

“I believe today was a very good second beginning, because I believe it started long ago when leaders of the day, before I was around, asked for those very same things.” — Audrey Poitras, president of the Métis Nation of Alberta.

"The history of cultural genocide, territorial dispossession and death at assimilationist schools run by the Catholic Church is shared by American Indians, Alaska Natives and Native Hawaiians in the United States. In fact, the segregated, compulsory, government-funded, and church-run Indian residential school system in Canada was modelled after the Federal Indian boarding school system in the United States. ... It is my hope that your visit and apology to the survivors of Canadian Indian residential schools marks the beginning of a new chapter of repair and reparations between the church and all Indigenous peoples." — Fawn Sharp, president of the National Congress of American Indians.

This report by The Canadian Press was first published July 25, 2022.