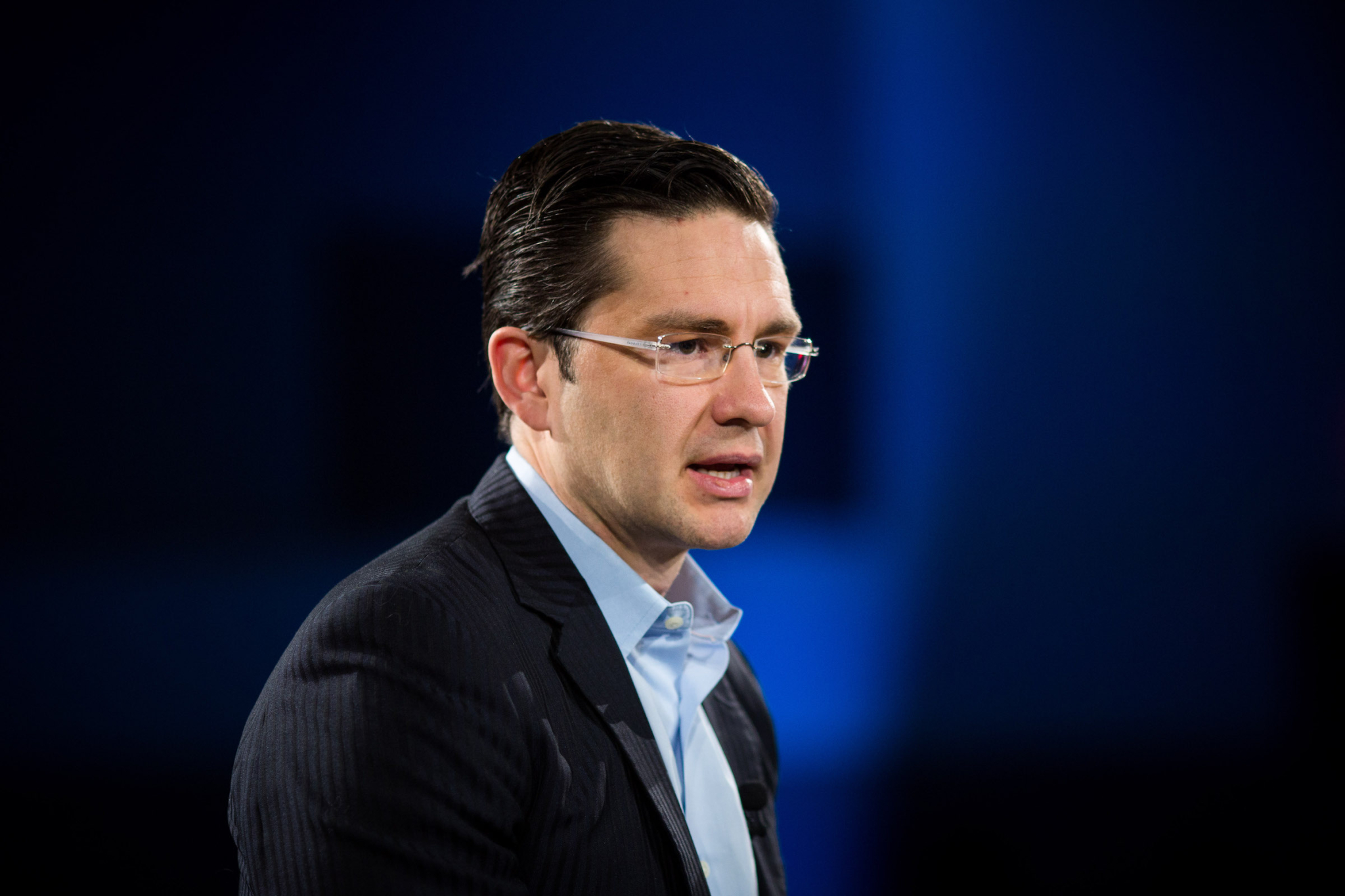 Pierre Poiilievre is willing to do whatever it takes to beat Justin Trudeau, writes columnist Max Fawcett — even if it means setting Canadians against government agencies and institutions designed to help them. File photo by Alex Tétreault
Previous story
Next story

In 2016, Donald Trump showed the world just how powerful a simple catchphrase can be. It’s safe to assume Pierre Poilievre and his political advisers were paying close attention to the rhetorical power of the former U.S. president’s call to “Make America Great Again.” After all, Poilievre has developed a catchphrase of his own with his now-familiar call to “Fire the Gatekeepers.” Whether he’s talking about global energy policy or the pileup at Pearson International Airport, Poilievre always turns to that simple political prescription. And so far, at least, it seems to be working.

Poilievre’s campaign website defines these “Gatekeepers” as “the consulting class, politicians, bureaucrats, or agencies,” all of whom apparently “create roadblocks for progress and charge a hefty fee for anyone who would want to build anything.” In Poilievre’s world, they’re responsible for everything from blocked pipeline projects to soaring house prices in major markets like Toronto and Vancouver.

There’s a big problem with this formulation: gatekeepers actually serve an important function in our society. They routinely (and often quietly) protect citizens from all manner of danger, whether that’s corporate malfeasance or government corruption. The Walkerton E. coli outbreak, which killed seven people and made roughly half the town’s 5,000 residents sick, is the most obvious example of what can happen when gatekeepers get sidelined.

Ironically, nowhere is the importance of that gatekeeping function more obvious right now than the wild world of cryptocurrency, one that Poilievre enthusiastically endorsed (and encouraged people to “opt into”) just a few months ago. Just ask the Ontario couple who lost more than $370,000 in a recent cryptocurrency scam, one where they placed their trust in “an alleged reputable investment company” that was anything but.

They’re hardly alone in getting swindled by cryptocurrency entrepreneurs. Celsius Network, a major U.S.-based crypto lender, owed more than $4.7 billion to its 1.7 million customers when it went belly-up earlier this month, and those people will be lucky if they see pennies on their dollars when all is said and done. Michael Saylor, a so-called Bitcoin “whale,” urged governments to step in and regulate the industry before more people lose their metaphorical shirts. “The general public shouldn’t be buying unregistered securities from wildcat bankers that may or may not be there next Thursday,” he said.

Michael Chong, a long-standing Conservative MP and former cabinet colleague of Poilievre, seems to agree. “House prices have doubled in 6 years — and are now crashing,” he tweeted. “And now some stable coins and crypto schemes are collapsing — and others are frauds and Ponzi schemes. Where are the regulators? Where is the government in protecting the finances of Canadians?” Where, in other words, are the gatekeepers?

Outgoing Alberta Premier Jason Kenney, whose own gatekeeper-phobic government passed a “Red Tape Reduction Act” aimed at reducing regulations that interfere with business and investment, seems to appreciate the value of a gatekeeper or two. Back in March, the Alberta government suspended its 13-cent-per-litre gasoline tax and promised the savings would flow directly to consumers. Instead, for reasons that aren’t entirely clear, motorists now pay the same price at the pump in the rest of the country as they are in Alberta — and Kenney is asking the federal government’s Competition Bureau to investigate.

Even Poilievre is willing to protect certain gatekeepers, provided they serve his own political interests. You might think the supply management system, which was created by Pierre Trudeau and controls the supply of milk, eggs and poultry in Canada, would be an easy target for his anti-gatekeeper message. After all, it artificially raises prices for Canadian consumers and protects an entrenched group of interests that hold the quota for these products. But in the May leadership debate, Poilievre backed down from the opportunity to remove a key gatekeeper. “I do support supply management,” he said. “The alternative would be to buy out the quota.”

That’s the funny thing about gatekeepers: you don’t think you need them until you find out you do. But all the irony in the world won’t stop Poilievre or other populist politicians from blaming them for our problems, and it won’t slow the spread of their anti-elite, anti-government rhetoric. This is the new conservative playbook, after all: find the biggest and most distant windmills to tilt at and constantly point supporters in their direction.

That playbook has consequences for us all. Like Trump’s MAGA-themed populism, Poilievre’s politics are inherently corrosive to the broader project we call society. It erodes trust in our institutions, sows resentment among the population and creates enemies instead of empathy. It tempts people to believe there are easy solutions to complex problems, making it more difficult for policymakers to actually solve them.

Opinion: Pierre Poilievre is calling to "Fire the Gatekeepers," writes columnist @maxfawcett. But that's the thing about gatekeepers: you don’t think you need them until you find out you do.

For Poilievre, these are problems for another day. Right now, he’s willing to do whatever it takes to beat Justin Trudeau and become prime minister — even if it means setting Canadians against the government agencies and institutions that are there to help them. Just watch him.

PLEASE tell me that Canada's

PLEASE tell me that Canada's Conservative voters grasp the irony of a man gunning for the highest office (elite) in the system that runs our country (government) using "anti-elite, anti-government rhetoric" to win. (Certainly US Republican voters didn't catch the irony of a man firmly entrenched in the American morass of greed and privilege chanting "Drain the swamp.")

And if Poilievre is *for* employment, wouldn't he be unwise to go after a whole segment of workers in our economy like that? Workers who make Canada one of the safest (sure, frustratingly so sometimes, but still) nations in the world?

Keep calling out this T****-lite egotist who seems hell-bent on Americanizing and sundering this country.

We could tell you that they grasp the irony but it wouldn't be true. Look at the comment sections in PP's YouTubes. These people adore him as much as their American counterparts adore Trump. They think he is looking out for them. That belief is really important to them and mere facts will not be allowed to threaten it.

We could tell you that they appreciate the irony but it wouldn't be true. Take a look at the comments sections of PP's YouTube videos. They adore the man as much as their American counterparts adore Trump. Those beliefs are warm, comfy blankets to them and they're not going to give that up because of some mere facts.

He should be called out on this but I don't know if many Canadian journalists have the backbone to do so. They think it's important to be "fair" which seems to mean "make him look good."

We could tell you that they appreciate the irony but it wouldn't be true. Take a look at the comments sections of PP's YouTube videos. They adore the man as much as their American counterparts adore Trump. Those beliefs are warm, comfy blankets to them and they're not going to give that up because of some mere facts. I'm afraid most of our journalists won't have the backbone to call him on any of this. They might even feel they're being unfair.

Required reading to help understand populist cranks and their followers:
The Authoritarians by Bob Altemeyer, online free PDF book.
An obscure psychology prof in Manitoba made it his career to study the authoritarian personality. This is research, not opinion. The results are troubling.
Hint: "If they knew the facts...", "If they could see the irony...", and so on, has no effect.

Thank you for the heads up on

Thank you for the heads up on this author and his subject. I understand, "Donald Trump withers in his own mind whenever the spotlight leaves him." As well as, "Trump starts to shrivel inside the instant the light leaves him, so he remains a child searching... " reminds me of the 2 year old ego continually fighting to be recognized as unique and remain in the limelight that most parents experience when raising their children. Eventually each child outgrows the 2 year old but some, like Trump, remain trapped in the playpen forever.

The enemy of the "great man"

The enemy of the "great man" is society, justice, democracy and education. The "great man" in the form of populism is a movie star, a celebrity who looks perfect, who sounds perfect, always wins and never loses. This is the archetype nurtured in the white supremacy pecking order. We humans like to think that we have risen above school yard bullies, their games and rhetoric, but the last few years have shown that we are willing to sack the leaders who have integrity and fall in love with the evil genius. We have turned our mother nature into a circus show.

And she (Mother Nature) isn't

And she (Mother Nature) isn't going to tolerate it much longer. Let's face it, after all is said and done, most populist conservatives are fossils serving the fossil fuel titans that have us staring into the abyss of hot house earth. Far be it from them to let reality threaten their dreams of world domination.

The best I can say is, if we elect that little snake, we likely deserve him.