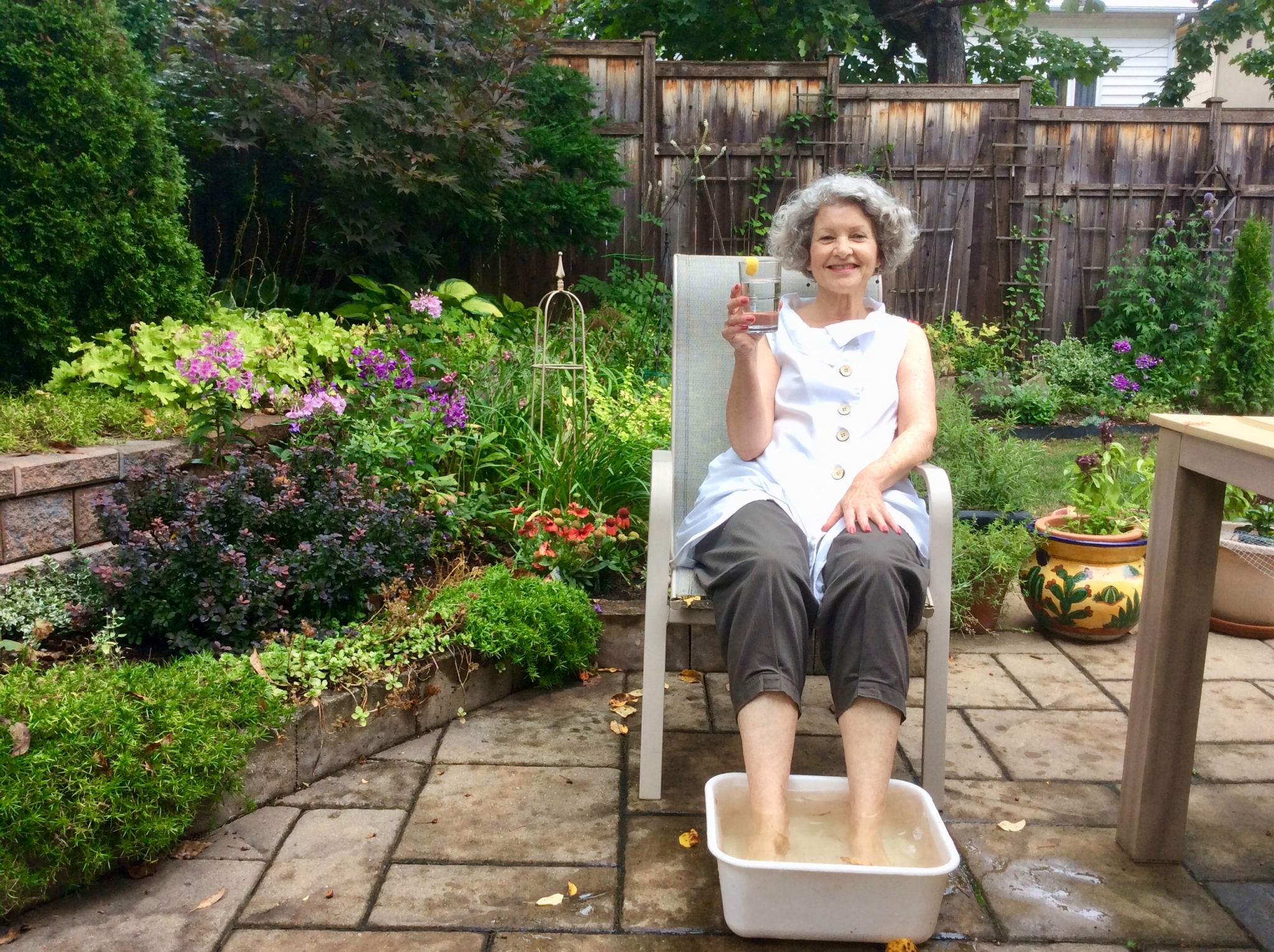 Joan Lawrence has many tips on how to beat the heat without using air conditioning, including iced foot baths and the occasional gin and tonic. Photo submitted by Joan Lawrence
Previous story

Ottawa resident Joan Lawrence says the key to living without air conditioning is all about “pacing yourself.”

“Calm down, move more slowly, get things done first thing in the morning before the sun gets too hot,” she says. “Work with the heat, rather than against it.”

Lawrence grew up without AC and has lived in tropical climes as an adult, so she believes she may be better acclimatized than some to high heat and humidity. Even though her Ottawa home has AC, by August, she still hadn’t turned it on even though temperatures have frequently cracked 30 C. “I told my husband we really should turn it on just to make sure it is still working,” she laughed. She adds they also have a couple of large, mature trees that help keep their house cool.

It’s a choice they make to reduce their carbon footprint. Air conditioners are a major source of greenhouse gas emissions because they emit hydrofluorocarbons (HFCs), man-made industrial chemicals used mainly for cooling and refrigeration. The Climate and Clean Air Coalition also says HFCs are nearly 4,000 times more damaging to the climate than carbon dioxide over a 20-year period.

The International Energy Agency reports energy consumption for space cooling has more than tripled since 1990 and continued to grow in 2020, driven in part by people spending more time at home.

As we experience more episodes of extreme heat, keeping buildings cool is “a matter of life or death,” says Stephen Thomas, a climate solutions policy analyst with the David Suzuki Foundation.

“We need to move quickly and decisively away from fossil fuels to clean energy, such as solar and wind power,” he says. That, coupled with “deep energy retrofits, will make our homes more comfortable so that the use of cooling can be encouraged to keep people healthy.”

You may not be ready to turn your AC off entirely, but you can use it less, reduce your greenhouse gas emissions and lower your electricity bill since some AC units can burn more electricity than any other household appliance.

Lawrence says if it gets to the point where they just can’t stand the heat and humidity any longer, or they have guests who have breathing issues, “we set the AC to 25 C, which reduces the humidity tremendously but doesn’t chill the house and therefore uses far less energy.”

The case against air conditioning and tips on how to beat the heat without it. @NatObserver columnist @beckyrynor reports. #AirConditioning #Hydrofluorocarbons #GHGs

Her final tip: never underestimate the cooling power of “a couple of gin and tonics.”

Great story! A further small tip: wet towel on the nape of your neck. Cools you right off!

I wonder also about hydrofluorocarbons. Canada is supposed to phase out hydrofluorocarbons in refrigeration and air-conditioning under the Montreal protocol and its Kigali amendment. Here are the new regulations that Canada adopted in 2018: https://www.canada.ca/en/environment-climate-change/services/canadian-en... It might be worth while writing a follow-up story about how this is going. A couple of years ago when we were buying a new fridge and wanted to avoid HFCs, we did manage to find a model that runs on propane but the majority of the appliances being sold hadn't switched yet.
As climate heats up, AC will become a necessity for many populations. I entirely agree with the article that a healthy person can and should avoid using AC for a temperature of 30. But for the elderly and people with chronic conditions, and all of us as temps in Canada nudge 40, air conditioning may be a matter of life and death. Our government needs to do its job so that people can keep (reasonably) cool while avoiding emissions.