Canada continues to fuel environmental racism by letting it fuel us 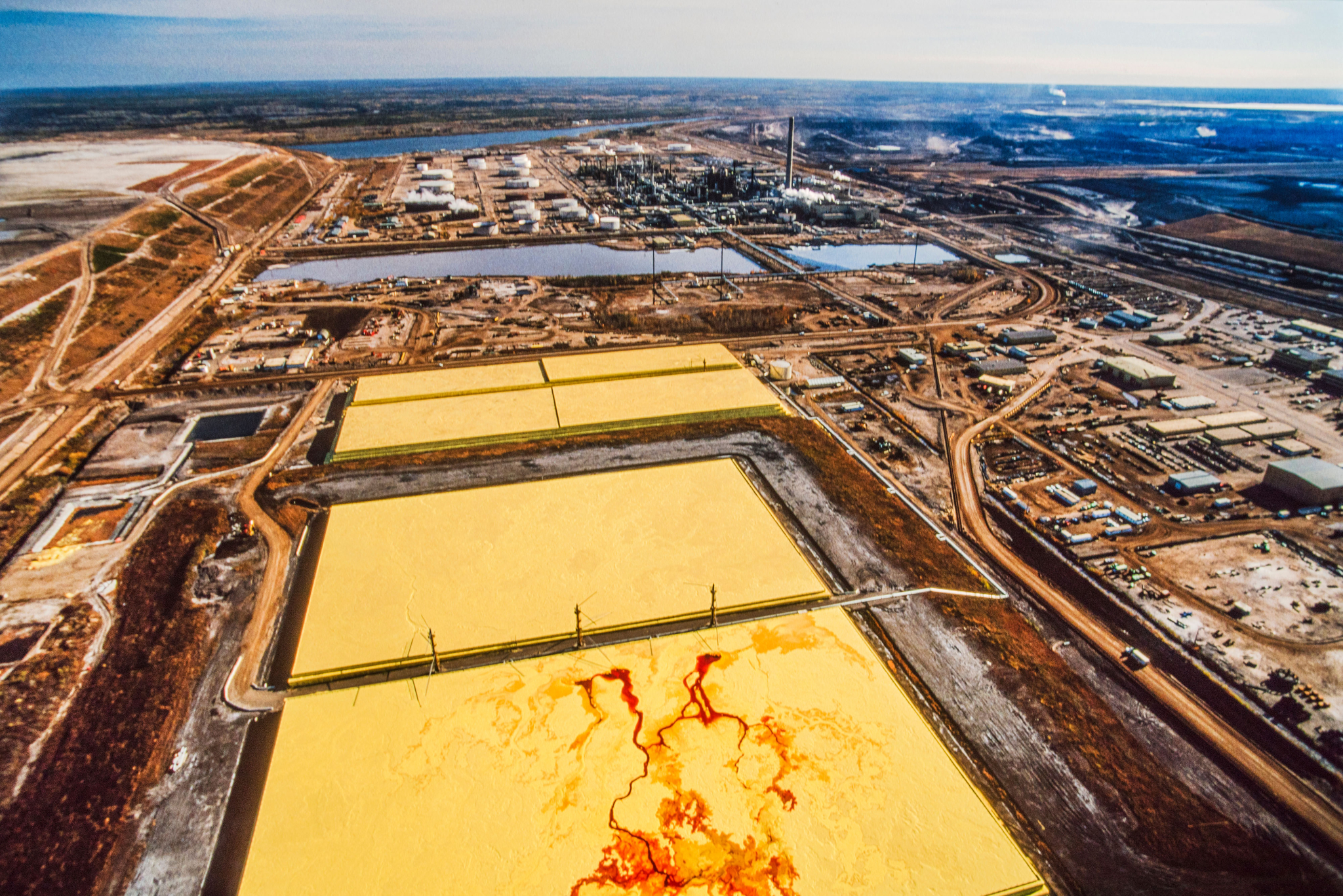 August 9 marks International Day of the World's Indigenous Peoples. As per tradition, governments, companies and institutions across Canada are showcasing their ability to use nice words and make enticing promises of a better tomorrow for Indigenous people.

Yet, their talk about reconciliation is sharply contrasted with the reality that government and industry continue to support one of the most notable instances of environmental injustice in Canada: the industrial takeover of Indigenous lands by oil production.

Canada must face the fact that until we have phased out oil production in the tar sands, we will continue to fuel and fund the injustice we are claiming to care about.

Racialized communities and Indigenous people are disproportionately subjected to higher levels of environmental risk than other segments of society. They experience higher exposure to pollution, toxic chemicals and other environmental hazards and unequal access to human rights, such as clean drinking water — this is known as environmental racism.

The oilsands in northern Alberta are the site of immense environmental racism, yet they have conveniently escaped being a part of the national conversation on the topic.

The companies that benefit from oilsands extraction have tried to convince us that climate change is their only (small) harm. They continue to claim that they are close to a technological fix for their massive toxic waste problem. In fact, they are actively and knowingly perpetuating environmental racism on the predominantly Indigenous front-line communities, while their own data shows toxic chemicals are leaking from tailings ponds into the surrounding environment and groundwater. As the ponds are not impermeable, operators are ramping up production, which will continue to fill the ponds.

Oilsands open-pit and in-situ mining by companies such as Suncor and Canadian Natural Resources Limited destroy large areas of boreal forest and wetlands due to the direct removal of the forest and then the creation of tailings “ponds.”

These “ponds” are, in fact, immense pits filled with the fluid, toxic waste leftovers from oil production and are proven to leak and evaporate their dangerous content into the surrounding environment. The oilsands' tailings “ponds” now disrupt an area large enough to cover Paris three times over, and they contain over 1.4 trillion litres of toxic fluids.

Some of the First Nations and Métis communities living downstream of the tailings, such as Fort McKay residents, now refuse to drink the water or consume fish and ducks, as they likely have come in contact with these toxic fluids.

This year’s Indigenous Peoples Day theme is “The Role of Indigenous Women in the Preservation and Transmission of Traditional Knowledge.” Yet industrial activity prevents Indigenous women from playing this role, write Aliénor Rougeot & Tori Cress.

Indigenous communities that have relied on the once beautiful lakes, rivers, streams, forests and wetlands for their sustenance since time immemorial have been displaced to tiny parcels of “lands reserved for Indians” from their territories on which Creation placed them.

This was how our lands were defined when the Indian Act first became law in Canada. It has since been amended, but that was how they defined "reserve land."

In Section 91(24), the federal government (Canadian government) was assigned responsibility for all “Indians and lands reserved for Indians.”

Communities downstream of the Alberta oilsands, like the Athabasca Chipewyan First Nation and the Mikisew Cree First Nation,​​ have raised serious health concerns, such as experiencing high levels of rare cancers, which local doctors attribute to oilsands operations. The cancer epidemic faced by Indigenous communities in the Alberta tar sands region was brought to light by Dr. John O'Connor in 2006.

Connor is a Fort McMurray physician who first spoke out about the potential impact of the tar sands extraction industry on human health, particularly in Fort Chipewyan, a remote community downstream from Fort McMurray’s open-pit mines and toxic tailings ponds.

The harm goes beyond physical health degradation. The rapid and incessant sprawl of the tailings “ponds” has resulted in the takeover of thousands of hectares of Indigenous lands, affecting their ability to access and pass on their traditional practices.

This year’s theme for Indigenous Peoples Day is “The Role of Indigenous Women in the Preservation and Transmission of Traditional Knowledge.” Yet, in a country that often prides itself on its progress on gender parity, industrial activity is a direct barrier to Indigenous women playing such a role.

Fort McKay First Nation member Jean L’Hommecourt, for example, testifies to how tailings “ponds” restrict her ability to pass on teachings to her young ones. Industry’s activity has fenced them in and has driven away the fur-bearing animals and bug life necessary for hunting and gathering. This brutal obstacle to accessing one’s traditional practices creates immeasurable harm, as these are often the last barrier in the face of colonization.

No matter the words we say to celebrate Indigenous history and tradition, they will mean nothing if Canada continues to protect and fund — often with our taxpayers’ dollars — an industry that knowingly perpetuates environmental racism.

Tori Cress is Anishinaabe from G’Chimnissing, an island community on the shores of Waaseyaagami-wiikwed (Georgian Bay, Ont.) in Williams Treaty territory. She has brought her passion for communications work and grassroots community engagement to the Keepers of the Water as our part-time communications manager. Her role includes communication strategy development, managing and maintaining the Keepers of the Water website, development and publishing a quarterly newsletter, social media management and expansion, and community engagement.

Aliénor Rougeot is a program manager at Environmental Defence Canada where she advocates for a just transition for workers and communities and for the full cleanup of the tailings "ponds" in the oilsands. She has been a human rights advocate since a very young age, with a focus on climate justice since high school. Alienor co-founded the group Fridays for Future Toronto and has led numerous student climate mobilizations in that role.

Despite obvious environmental racism, the O&G industry's divide and conquer tactics have split indigenous communities — and not just in Alberta. Spurred by promise of jobs and new-found wealth, some indigenous groups and leaders now vocally support the industry and oppose any efforts to rein in "development". Many are apparently willing to overlook the destruction of their traditional lands and way of life as well as health risks.

In June, former minister of justice and attorney general of Canada Jody Wilson-Raybould addressed The Global Energy Show in Calgary: "'The energy sector, I think, can lead the charge in being in-betweeners. You are on the ground, in community, touching directly what is vitally important to Indigenous people — their land and resources, the environment.' She said the energy sector is already proving to be an instrument of reconciliation, by helping bring communities out of poverty."
https://calgaryherald.com/business/global-energy-show-returns-highlighti...

"Oil and gas sector sheds light on strides made with Indigenous companies, people"
"Report highlights industry's hiring, investing in and partnering with Indigenous peoples
"In 2019, the natural gas and oil industry procured more than $2.6 billion of goods and services from 275 Indigenous suppliers, contractors and other businesses across Canada.
"From 2017 to 2019, the oilsands industry's Indigenous community investment spending rose from $21 million to $32 million. Funding helped support such initiatives as community activities, in-kind investments and contributions to community infrastructure.
"Métis entrepreneur Jordan Jolicoeur, who is also on the board of directors of the Canadian Council for Aboriginal Business, says there are a lot more Indigenous businesses finding success in the oil and gas sector, especially over the past 5 years.
"'You are really seeing a push to engage Indigenous businesses in supply chain through procurement,' said Jolicoeur, president and CEO of Carvel Electric. 'The oil and gas sector is really narrowing in on creating business opportunities so that Indigenous people are employed in the industry, and I am seeing a very large uptake in that.'
"'When Indigenous companies succeed, they hire their people, they create opportunities, they become role models in their communities … for the young person to say I can do that, I can have that good job.'
https://www.cbc.ca/news/canada/calgary/oil-gas-indigenous-companies-1.62...

"Keystone XL denial will hurt communities, Indigenous business coalition leader says"
"The cancellation of the Keystone XL pipeline by U.S. President Joe Biden is a major setback for Canadian Indigenous people, says the leader of a group promoting their participation in oil & gas development as a solution to poverty on reserves.
"The decision means fewer jobs in the short term for Indigenous people in constructing the pipeline and supplying goods and services for it, said Dale Swampy, president of the National Coalition of Chiefs.
"It also implies more long-term unemployment for those who work in exploring and developing conventional and oilsands projects in Western Canada because it impedes investment in production growth, he said.
"'It's quite a blow to the First Nations that are involved right now in working with TC Energy to access employment training and contracting opportunities,' said Swampy.
"'Within Alberta, First Nations are pretty closely entrenched with all of the activities occurring with the oil & gas industry. Any change, especially a big change like this, really affects our bands' ability to keep our people employed.'
"… Pipeline contracts for earth-clearing help her employees at Top Notch Oilfield Contracting feed their families, countered Judy Desjarlais, a member of the Blueberry River First Nation in northeastern B.C.
"She said Biden's decision is a 'kick in the teeth' for Canada and its Indigenous people."
https://www.nationalobserver.com/2021/01/22/news/keystone-xl-denial-hurt...

Eriel Deranger, from Athabasca Chipewyan First Nation and Executive Director of Indigenous Climate Action, has spoken eloquently of the conundrum faced by indigenous communities and leaders:

"Athabasca Chipewyan First Nation Chief Allan Adam was for a long time firmly opposed to continued oil sands expansion in his people's region, but earlier this year did an about-face on the issue and has since publicly called for First Nations to take an ownership stake in pipeline projects like Trans Mountain.
"Eriel Deranger, who has worked for the First Nation, said the chief's new position is 'sad' and represents a sense of defeat after her people have worked hard to protect their land and territory from the harms of the fossil fuel industry.
"'Colonialism and capitalism and systems of white supremacy are not just bound to white folks – they are pervasive, they are packaged and sold,' she said.
"'In order to be successful you need to have money and a car and a home and you need to be part of the capitalist machine. And so much so that it's been forced on a lot of communities.
"'The reality is…they have literally beat us down and eroded our ability to have that connection to the land, through degradation and contamination.'
"Deranger says many Indigenous people have been forced to adopt an 'if you can't beat 'em, join 'em' mentality when it comes to fighting against harmful policies or industries that harm their communities.
"'There's this pervasive attempt to continue to try to assimilate and coerce Indigenous communities,' she says. 'And you wonder why communities are buckling – because they don't have millions of dollars to enter into these review processes and legal cases to challenge these projects.
"'It's coercion and bribery at its finest, it's another tactic of assimilation, and it's not fair that we're being used in this way because we have literally been painted into corners in our communities to accept this because is literally no other option.'"
"‘Literally life and death’: Indigenous climate leaders critical of Canada’s response to climate change report" (APTN, Oct 17, 2018)
http://aptnnews.ca/2018/10/17/literally-life-and-death-indigenous-climat...

"I feel betrayed by the government and a system that has destroyed the spirit of my people"
https://www.nationalobserver.com/2018/04/24/opinion/i-feel-betrayed-gove...
Eriel Deranger, April 24th 2018