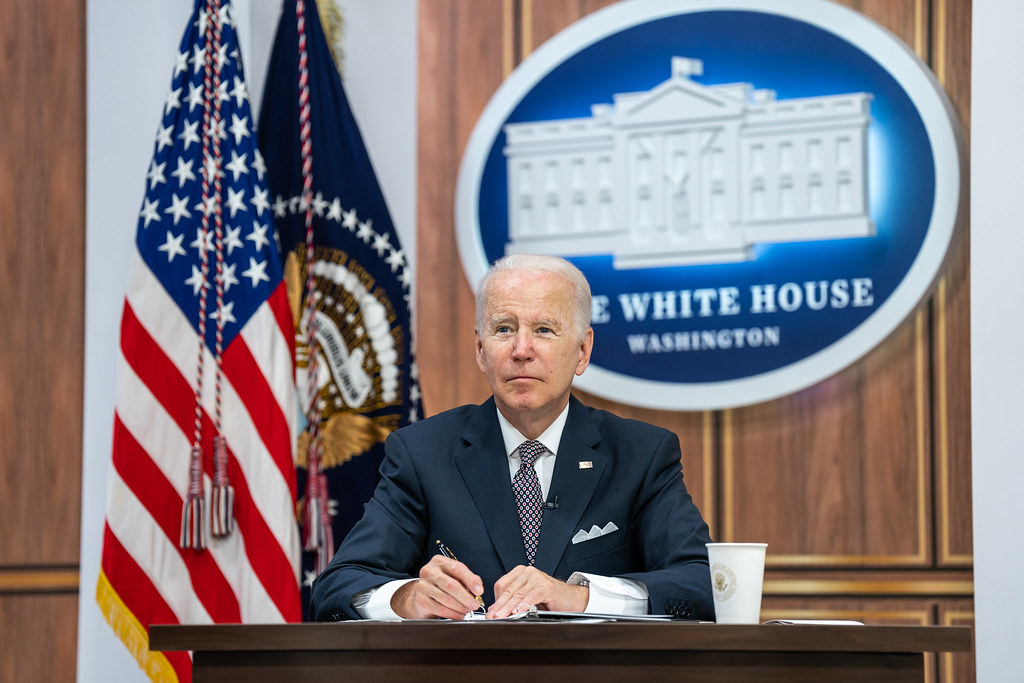 Now that the U.S. has managed to pass the biggest piece of climate legislation in history — both theirs and the world’s — it’s time for Canada to raise its own game, writes columnist Max Fawcett. Official White House Photo by Adam Schultz via Flickr
Previous story
Next story

Ever since Justin Trudeau’s Liberal government passed the Greenhouse Gas Pollution Pricing Act in 2018, Canada has been out in front of the United States on climate policy.

His fellow Liberals (and, indeed, many Canadians) view this as a point of national pride, but Conservatives have routinely portrayed it as self-defeating virtue signalling that damages our economy and its energy sector and does little to impact global carbon balances. It probably cost the CPC votes in the last two elections, but their argument also got a foothold in the collective consciousness of many Canadians — witness Liberal strategist and pollster David Herle referencing it in a recent podcast.

Well, that talking point is now deader than Patrick Brown’s leadership hopes. In one of the great ironies in recent memory, it was killed by that most conservative of Democratic senators: Joe Manchin. In a stunning reversal, the senator for West Virginia and chair of the Senate Committee on Energy and Natural Resources voted in favour of the Inflation Reduction Act, a piece of legislation that will spend $369 billion on climate-friendly measures and potentially reduce greenhouse gas emissions by 40 per cent below 2005 levels by 2030.

Most of the heavy lifting there will be done by new subsidies and tax credits that will accelerate the adoption of electric vehicles and clean power. As Princeton engineering professor Jesse Jenkins tweeted, “the bill would directly reduce annual U.S. energy expenditures by at least ~4% by 2030 in our modeling. That equates to a savings of nearly $50 billion annually for households, businesses, and industry and translates to hundreds of dollars in annual energy cost savings for U.S. households.”

It also equates to a 3.5-million-barrel-per-day reduction in U.S. consumption of oil compared to the International Energy Agency’s 2022 annual energy outlook. This should get the attention of everyone in Canada’s oil and gas industry. Oh, but there’s more: in order to drive down emissions of methane, a particularly potent heat-trapping gas emitted by old or inadequate oil and gas infrastructure, the bill will create a $900-per-tonne fee in 2024 that will rise to $1,500 per tonne in 2026.

As New York Times columnist Paul Krugman wrote, “This is a very big deal. The act isn’t, by itself, enough to avert climate disaster. But it’s a huge step in the right direction, and sets the stage for more action in the years ahead.”

Mark Carney, the former head of the Bank of England and the Bank of Canada, shares Krugman’s enthusiasm. “The landmark climate, energy and tax legislation just passed by the US Senate joins the EU’s RePowerEU action plan & UK’s Energy Security Strategy to accelerate the G7 transition to reliable, affordable and clean energy,” he tweeted. “Expect more.”

It might finally be time to expect more here in Canada as well. After years of tiptoeing around the energy sector and its numerous allies in politics and the punditocracy, the federal government finally has the cover it needs to bring forward more ambitious policies. Those should include its long-overdue cap on oil and gas emissions and the proposed regulations on methane emissions, which are set to be published next year. And if the government was ever inclined to go easy on the oil and gas industry, recent comments from some of its most prominent (and well-paid) executives should make it think twice.

After reporting net income of $2.4 billion in the second quarter of this year (more than six times higher than its results in the second quarter of last year) Imperial Oil CEO Brad Corson said the federal government’s emissions reductions plan was “very aggressive” and “stretches the capability of what is technically and economically feasible.” The company, for what it’s worth, put more than $2.7 billion in the pockets of its shareholders through dividends and stock buybacks over just those three months.

Tim McKay, the president of Canadian Natural Resources, echoed Corson’s remarks in a conference call announcing his own company’s boffo quarter, one that included $4.6 billion returned to shareholders and the announcement of a $1.50/share special dividend later this month. “In our view, this (federal) cap is unnecessary and overly ambitious in light of our stated preference for government and industry to continue to work together through the Pathways initiative to achieve an already announced emissions reduction target,” he said. “It is important for all parties to continue to work together.”

Opinion: Canada be warned. U.S. President Joe Biden's climate bill will propel the entire global economy in the direction of a cleaner and lower-carbon future, @maxfawcett writes for @NatObserver. #ClimateCrisis

It is important. But it’s also important for a massively profitable industry like oil and gas to pay its own way, given it has contributed disproportionately to Canada’s greenhouse gas emissions in the past. It may have been able to hide behind the Trump administration’s hostility to climate policy and the Biden administration’s early inability to get anything done on that front. But now that the U.S. has managed to pass the biggest piece of climate legislation in history — both theirs and the world’s — it’s time for Canada to raise its own game.

That means the federal government shouldn’t contribute a cent more than it already has to the carbon capture and storage projects companies like Canadian Natural Resources and Imperial Oil keep talking up. As their recent quarterly reports and multibillion-dollar returns to shareholders show, they have more than enough money to fund it themselves — especially with the generous tax credit already announced by Ottawa.

For too long, the United States was a headwind on climate policy in Canada, one that gave those inclined to rag the puck on the issue both an opportunity and an excuse. But now, with one stroke of the president’s pen, it’s become a massive tailwind — one that will propel the entire global economy in the direction of a cleaner and lower-carbon future. If our oil and gas leaders and lobbyists haven’t figured that out yet, they will soon.

Ontario conservatives favour Poilievre — rest of Canada, not so much

Fawcett: "Ever since Justin

Fawcett: "Ever since Justin Trudeau’s Liberal government passed the Greenhouse Gas Pollution Pricing Act in 2018, Canada has been out in front of the United States on climate policy."

Expect the Trudeau govt to continue to fail.
Trudeau has no reason to follow Biden's example. The Liberal Party remains under the thumb of the Big Banks and Corporate Canada — the oil patch's financial backers. They dictate Canada's climate policy and agenda.
Don't expect Trudeau to upset the apple cart. No sign the Liberals have changed their minds on Canada's fossil-fuel expansion agenda.
Don't believe the advertising.

Yep. And next thing you know

Yep. And next thing you know, there'll "still" be zero subsidies for gas and oil, but that blue hydrogen, yeah. Investors won't touch it with a 10' pole, It's more expensive to produce than green hydrogen, so no one wants to buy it, either.
Banks won't want to invest in it, but would certainly do so in a blink if they were guaranteed by the taxpayers of Canada.

(Isn't that what happened last time around the "no subsidies" show? And predictably so?)

Many kudos to Joe Biden.

Many kudos to Joe Biden. This is a legacy policy that will mark his term favourably for a long time. I'm not really up on US political protocol, but I think it will take a supermajority of 2/3 of the Senate and the House to cancel or alter the policy now that it's law. That should make it pretty safe from a Republican comeback in Congress in the midterms this fall. Biden still has over two years to follow up with presidential orders that bypass Congress while reinforcing the legislation.

When jobs are inevitably created in red states as the result of this policy, it will be very difficult for any Republican leader of any kind to eliminate them by cancelling clean energy employment out of wacko anti-science sentiments and subservience to carbonized donors instead of working for the well being of their constituents. Creating jobs must be the Democrat's meme with tangible results on the ground to make up for the bitterness over Rust Belt unemployment that worked in Trump's favour before.

There is a modicum of hope that the midterms will not deliver as big of a Republican wave as feared. Kansas -- a GOP state if there ever was one -- soundly defeated a recent referendum sponsored by the Republican state government to ban abortions. That, in spite of the Supreme Court's utterly biased ruling on Roe v Wade. Moderate Republican women will not be messed with, and many moderates of both genders and all shades are realizing that they can actually do something about the scorched earth tactics of the GOP, and not just on abortion, though fighting back against patriarchal tyranny and right wing religious wingnutism on that one issue will benefit the Democrats.