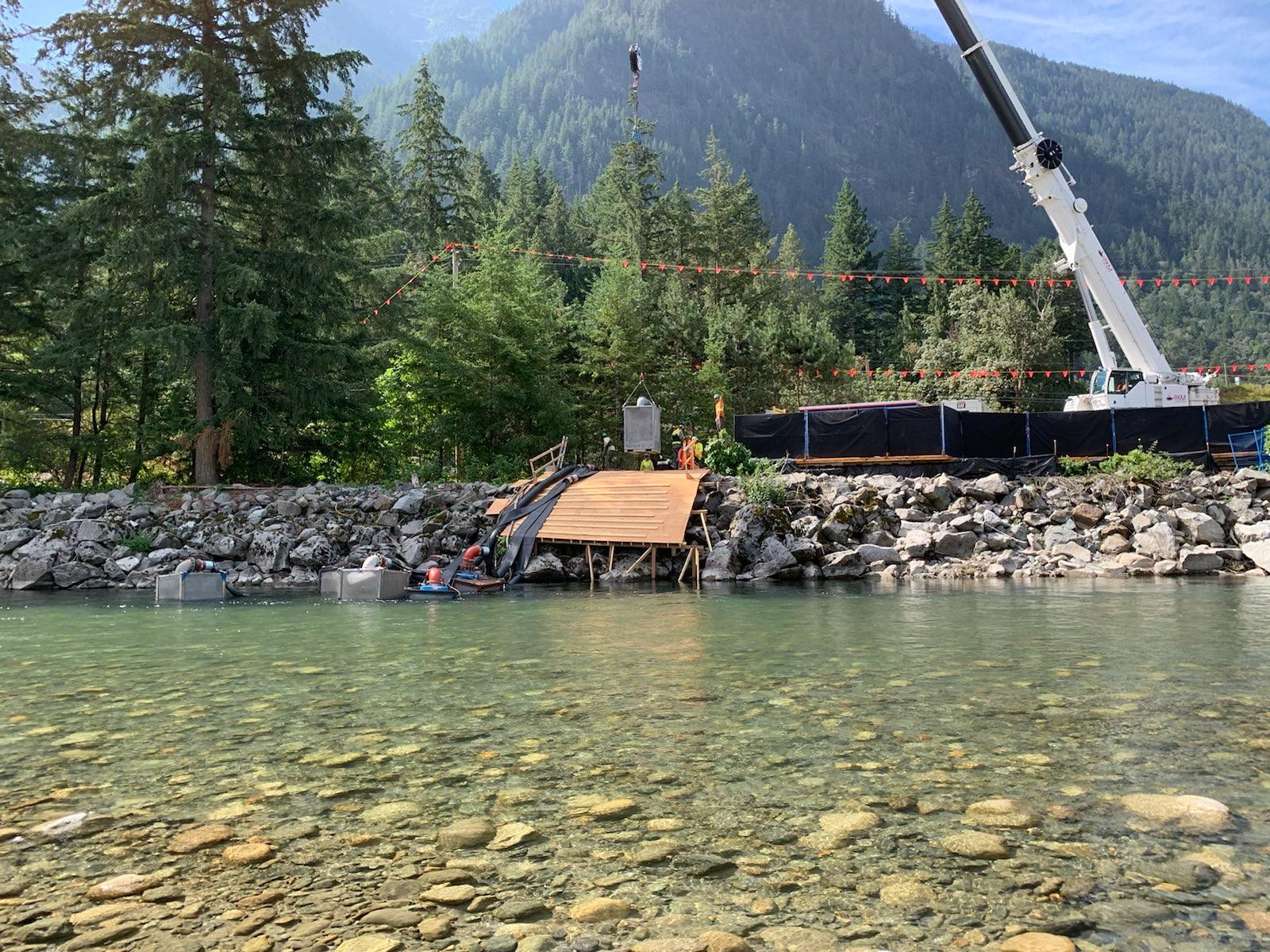 With the most significant construction work finished at a site in Hope, B.C., Trans Mountain should complete the remaining in-stream work, like backfilling a trench, by the end of this week. Photo submitted by Protect the Planet
Previous story
Next story

Pausing Trans Mountain pipeline construction at a Hope, B.C., river crossing would have only increased the risk to salmon later, as they arrive in greater numbers in late August and into September, the Department of Fisheries and Oceans (DFO) told Canada’s National Observer.

Last week, environmental group Protect the Planet raised the alarm after salmon were documented dying near a worksite on the Coquihalla River and urged DFO to intervene and halt construction. Four NDP MPs from B.C. also urged the federal government to take action to protect the salmon.

DFO gave Trans Mountain a permit for the month of August to do in-stream construction on the existing pipeline and the pipeline expansion.

As of Friday, the “most significant work” at the site has been completed, and Trans Mountain said the remaining in-stream work — like backfilling the trench and restoring the stream bed and banks — should be done by the end of the week before more salmon start arriving in late August and early September, Dan Bate, DFO’s manager of strategic communications told Canada’s National Observer in an emailed statement.

“DFO will be on site and will continue to monitor for regulatory compliance and evaluate the situation to ensure fish and fish habitat are protected,” the statement reads. It also added that the dead salmon being reported are likely sockeye that died before spawning because the fish expended too much energy while waiting for the Fraser River’s high flows to subside.

“It sounds a little deflective, blaming pre-spawn mortality on something where you've got a pretty clear smoking pipeline,” said Wilson. DFO has a tough job with plenty of hard decisions, he added.

“This is reflective of the sort of economic tradeoffs against ecological and conservation considerations, and they've made their choices pretty clear.”

Although August is virtually the only time digging in the stream bed doesn’t destroy fish eggs, there are other factors to consider, said Will Atlas, a salmon watershed scientist with the Wild Salmon Center.

Removing riparian vegetation in the floodplain and huge sections of river poses a problem for the health of the river and species who depend on it, said Atlas. In the winter, water levels will rise and sediment previously rooted in place by the vegetation will flow downstream, smothering eggs, he said.

Pausing Trans Mountain pipeline construction at a Hope, B.C., river crossing would have only increased the risk to salmon later, as they arrive in greater numbers in late August and into September, said @FishOceansCAN following pressure to intervene.

During this time of year, summer steelhead trout are making their way upstream and need to eat as they go, unlike salmon. A lot of the bugs they feed on do well in really clean water and are often highly sensitive to big sediment runoff from construction sites like this, explained Wilson. Sedimentation also contributes to warming water to the detriment of temperature-sensitive trout and salmon.

With only “a few hundred fish” left, summer steelhead are effectively an endangered species, though they are not listed as such because the stock hasn’t been assessed, Atlas added.

Coastal GasLink has been fined multiple times for sediment flowing into fish-bearing streams, lakes and wetlands.

“Industrial modified rivers are not rivers that are healthy and functioning in a natural way,” said Atlas. “Running a pipeline through that watershed is essentially like just putting 1,000 more cuts down on those fish that are barely holding on.”

Hey, here's an idea! If they

Look, Trudeau--you already gave those billionaires who used to own the thing their bribe. What are you worried about, losing seats in Alberta? Here's a hint: YOU HAVE NO SEATS IN ALBERTA!