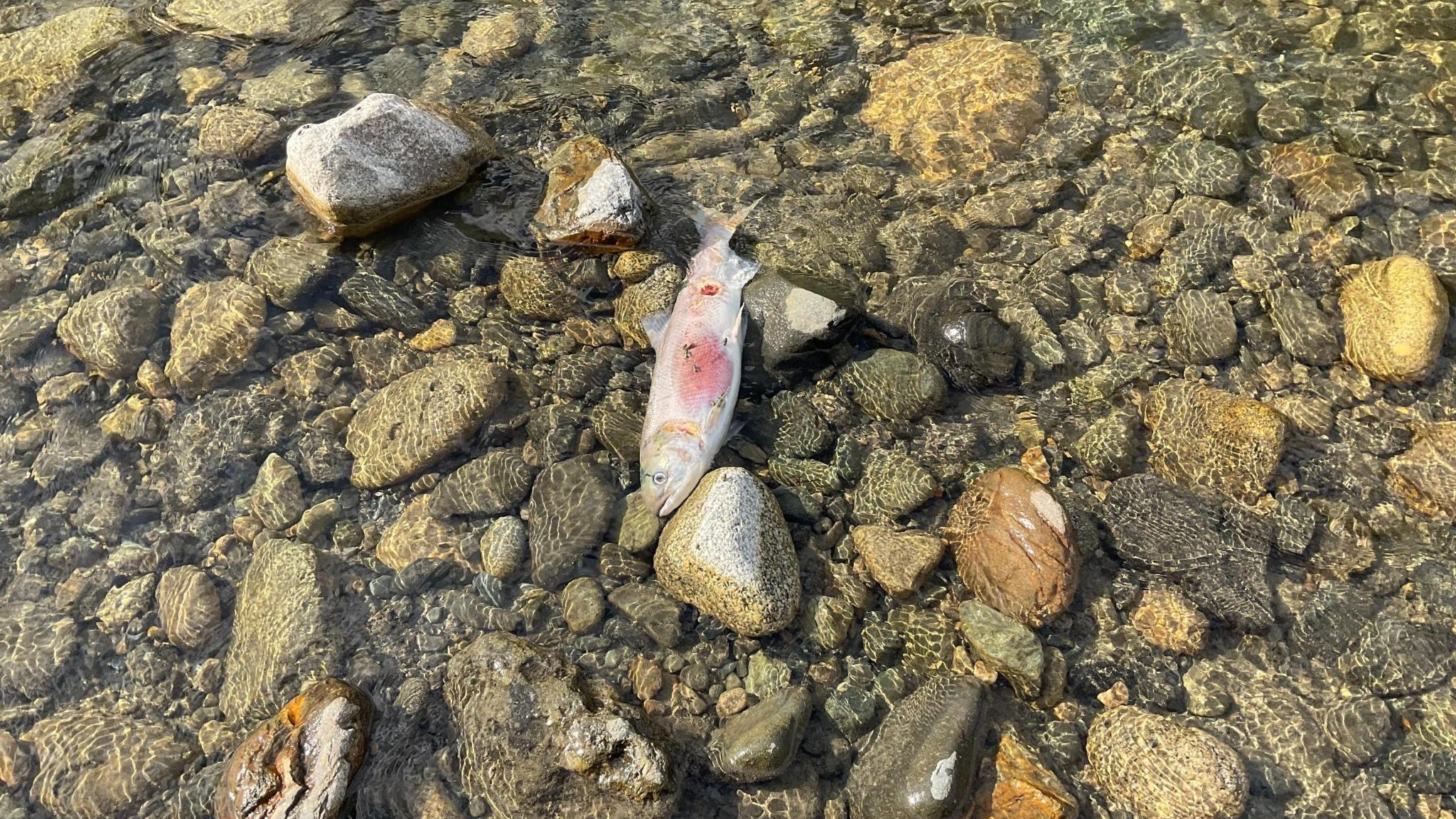 A dead salmon is photographed in the Coquihalla River near a Trans Mountain worksite. Photo by Kate Tairyan
Previous story
Next story

Environmentalists are calling on Fisheries and Oceans Canada (DFO) to halt pipeline construction in Hope, B.C., after dead salmon were found at Trans Mountain’s worksite on the Coquihalla River last weekend.

Longtime Hope resident Kate Tairyan and other members of Protect the Planet have been documenting the situation for more than a week. Right now, salmon can’t bypass the construction of the pipeline expansion project and many are dying without laying their eggs, Tairyan told Canada’s National Observer in an interview. Cutting open five dead salmon revealed four were full of eggs, she noted.

“There are hundreds of (salmon) trapped in your construction site,” said Tairyan, who is also a health sciences senior lecturer at SFU. “What are you going to do about them? Are you just going to let them die here or spawn near those excavators? That's not the right thing to do.”

Tairyan said a Trans Mountain biologist told her the dead salmon had already spawned. But she was skeptical: it is so early in the season and the fish seemed energetic and well-muscled — unlike those near the end of their lifecycle.

In what appears to be an early salmon run on the Coquihalla River, dead fish are showing up adjacent to Trans Mountain's in-stream work in the river, about 3 kilometers from its confluence with the Fraser. Aug. 4, 2022. Video by Kate Tairyan / Protect the Planet

Trans Mountain has a DFO permit allowing it to divert the river and remove 800 square metres of instream spawning habitat in order to replace part of the existing pipeline and install the new pipeline for the expansion project. The permit is only valid for August 2022.

“Normally, we start seeing the first salmon mid-August and then their quantities increase, and the peak is mid-September,” said Tairyan, who has watched every salmon run in her 15 years of living on the river.

This year, the run — which is set to be larger than average for sockeye salmon — coincides directly with the pipeline replacement and installation.

More than a dozen large pumps and black hoses transport water downstream of the site to lower the water level, enabling heavy equipment to dig in the river. Protect the Planet released drone footage of the worksite showing turbulent and muddied water, which makes it difficult for salmon to navigate upstream.

Salmon journeying upstream to reproduce are blocked by pipeline construction and are dying, unable to bypass Trans Mountain's worksite. Environmentalists are calling on @FishOceansCAN to halt construction so the fish can spawn. #TMX #Salmon

Now with video. Check out this drone shot of Trans Mountain working in a salmon bearing river during spawning season.

Then think about the millions of barrels of oil this pipeline is purported to carry.

Salmon are in danger. #stopTMX pic.twitter.com/bDIrvwR8yy

In an emailed statement to Canada’s National Observer, Trans Mountain said the work complies with Canada Energy Regulator-approved environmental protection plans and permits issued by DFO and the BC Oil and Gas Commission.

“Great care is taken to preserve the environmental features around the river, such as the wildlife and aquatic habitat provided within the riparian zone,” the statement reads, adding that water monitoring takes place throughout the construction process.

“After the pipes are installed, the stream will be returned to the natural flow path and the site will be reclaimed to its original condition with additional bed and bank flood protection.”

The company did not directly address Canada’s National Observer’s questions about whether a qualified environmental professional was present onsite that day.

For many days, Protect the Planet and concerned citizens contacted DFO with their concerns.

The DFO told Canada’s National Observer it “is aware of the criticism related to the impact of the TMX construction site at the Coquihalla River,” in an emailed statement yesterday evening.

It said a regulatory inspection team was on-site yesterday to ensure TMX is following the conditions imposed by their Fisheries Act authorization.

“Corrective action will be taken if required,” the statement said.

Last night, B.C. Environment Minister George Heyman tweeted acknowledging concerns about the worksite and urged the federal government to fully investigate the complaints and “take appropriate action to protect wild salmon and BC waterways if any wrongdoing is found.”

“I am not very hopeful,” said Tairyan. “This is like government policing government… like the fox taking care of the hen coop.”

Five species of salmon and steelhead trout migrate through or spawn on the Coquihalla River. Video taken by Tairyan shows two salmon being swept towards heavy machinery at the worksite.

In this video you can see a pair of #salmon being carried away towards heavy machinery in the Coquihalla River. @PPSTMX1 observed this dozens of times today. @FishOceansCAN @DFO_Pacific Maybe it's time to protect these fish and halt TMX construction? #StopTMX pic.twitter.com/8N3Ur6uiX5

The DFO permit requires fish to be “salvaged,” meaning caught and transported away from the construction site. However, it says salvaged fish must be relocated downstream, so they will still be unable to bypass the construction.

Tairyan and other Protect the Planet members have set up a citizen observation camp near the site to document Trans Mountain’s work and answer questions from locals.

“We don't have any intention to disrupt this work ourselves. It's not safe for us to do that. But we're going to be here watching, documenting,” said Tairyan, who spends hours observing the river every day.

“When I started asking more questions, they started adding more fence and then the next day we see they put black tarp so it's not transparent anymore,” she said. Tairyan also said there has been a recent uptick in security presence, including a worker that “follows me everywhere with his camera,” she said.

“I'm very respectful to everyone, I don't enter their construction site. I don't bother anyone. I just want to see what is happening. Sometimes I feel that I'm the only person witnessing this. And I have a duty to document it.”

Somebody please lend the

Somebody please lend the group a drone!