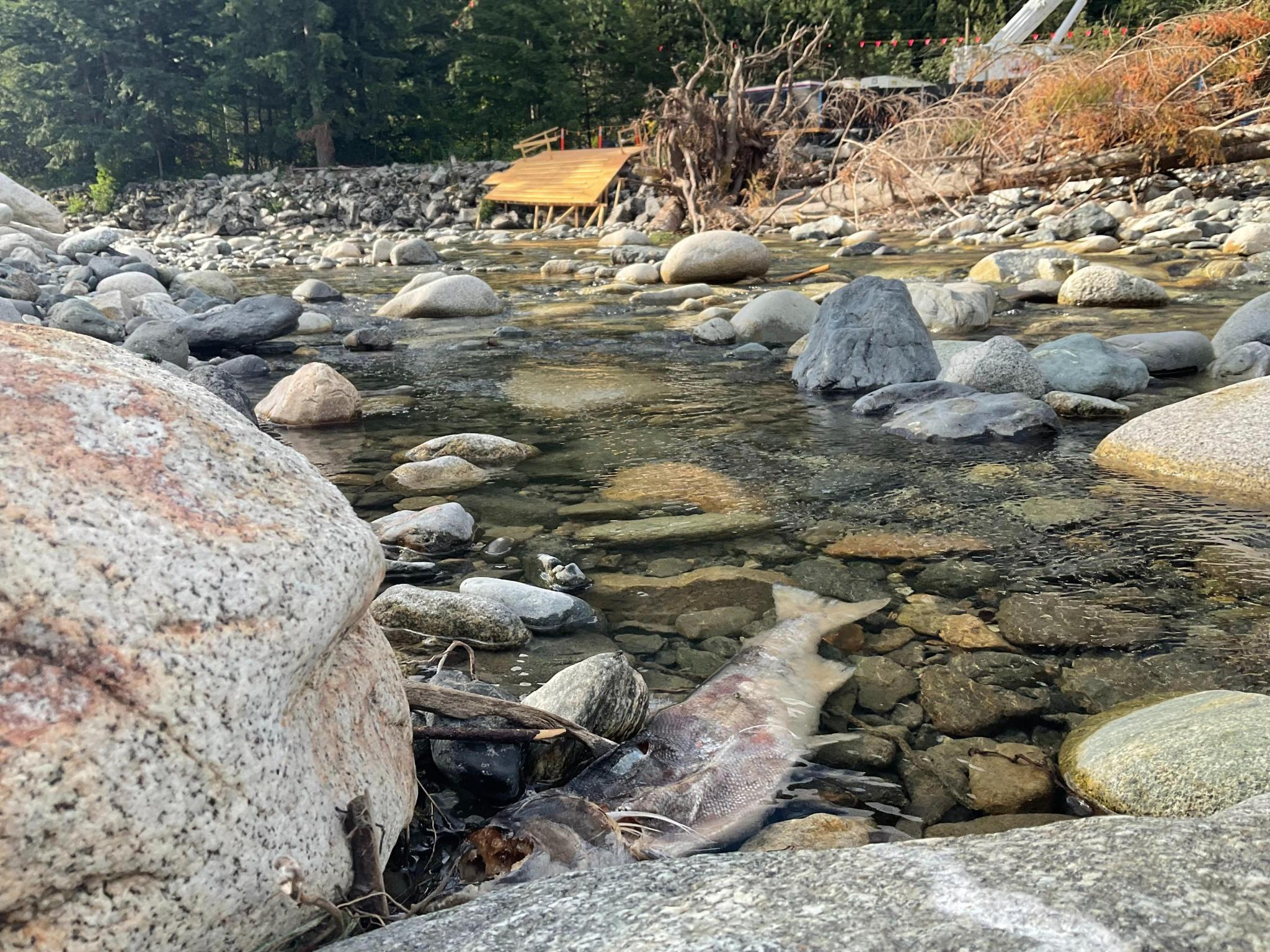 A dead salmon is photographed in the Coquihalla River near a Trans Mountain worksite. Photo by Kate Tairyan
Previous story

Four B.C. MPs are urging the federal government to halt the construction of the Trans Mountain pipeline and expansion project at least until salmon have finished spawning. The call comes after environmental group Protect the Planet documented salmon dying near a Trans Mountain worksite in Hope, B.C., last week.

Trans Mountain has a Department of Fisheries and Oceans (DFO) permit to do instream construction to replace a segment of the existing pipeline and install the new pipeline for the expansion project. The permit is valid for August — the month the DFO deems least disruptive to salmon.

But this year, longtime Hope resident and health science professor Kate Tairyan spotted salmon in the Coquihalla River at the beginning of August, which she says is three weeks earlier than usual.

“According to DFO calendars, the run starts at the end of August,” Tairyan told Canada’s National Observer. “But tell that to the fish.”

The letter asks the ministers for Fisheries and Oceans, Environment, Natural Resources and Crown-Indigenous Relations to “intervene and halt construction of the TMX pipeline expansion,” adding the future health of wild Pacific salmon species may depend on their action.

The federal NDP opposes the Liberal government’s purchase of the Trans Mountain pipeline and the expansion project, though Leader Jagmeet Singh has not said whether the party would cancel it.

“Ministers, our public opposition to the Trans Mountain pipeline expansion remains steadfast; but, so long as the pipeline remains an asset held by the government in the public trust, we expect transparency, accountability, and regulatory compliance in this undertaking, including every precaution to steward the safe passage of spawning salmon on the Coquihalla River, and all impacted tributaries of the Fraser River,” the letter reads.

Tairyan and her husband inspected five dead salmon and found four of them were full of eggs, the letter noted. She said they decided to check the fish after a Trans Mountain worker assured them the fish had already spawned.

This year is also expected to be a dominant year in the sockeye salmon’s four-year reproductive cycle, meaning the run size will be larger than in other years. The letter stressed that “protecting the millions of salmon expected to spawn in these rivers this year is utterly crucial for the survival of these keystone species.”

B.C. NDP MPs are urging the federal government to intervene and halt the construction of #TMX at least until salmon have finished spawning. #SalmonRun #TransMountain

On Tuesday, the DFO told Canada’s National Observer a regulatory inspection team was on-site to ensure Trans Mountain is following the conditions of the permit and that “corrective action will be taken if required.”

Keep up these toxic pipeline

Keep up these toxic pipeline projects.......carrying bitumen or fracked gas for export...and we can rest assured that the salmon will by history. Breathing fossil fumes may have impaired our intelligence. How else explain our willingness to put an iconic fish, that had done so much for the B.C. coast, at risk.

For export of a substance we need to stop producing....produced by carpet bombing deep earth and destroying more potable water in the process than most of us can imagine.....we're putting the sacred salmon on the chopping block???? The current gods are crazy.

Absolutely!! It's also past

Absolutely!! It's also past time to call out this criminal activity for what it is!! And the perpetrators - the "current gods" - are carrying out "species-icide"!! Even though the actions of these four MPs are commendable, the opposition - namely the federal NDP - MUST be much more FORCEFUL - this is no time for polite tactics!!!

I agree, the people are sick

I agree, the people are sick of the environmental destruction under both liberal and conjobs and its about time Jagmeet declared himself an environmental champion and stood up to the outrage committed by this dirty energy company with impunity, except a little fine by the DFO here and there. This is the same department that brought you the cod fishery disaster and well on their way to doing so with wild pacific salmon with their fish farm support and lies. Disgusting stewards of the oceans and fish, with pittance in fines levied at these polluting perpetrators who just continue ravaging the environment.