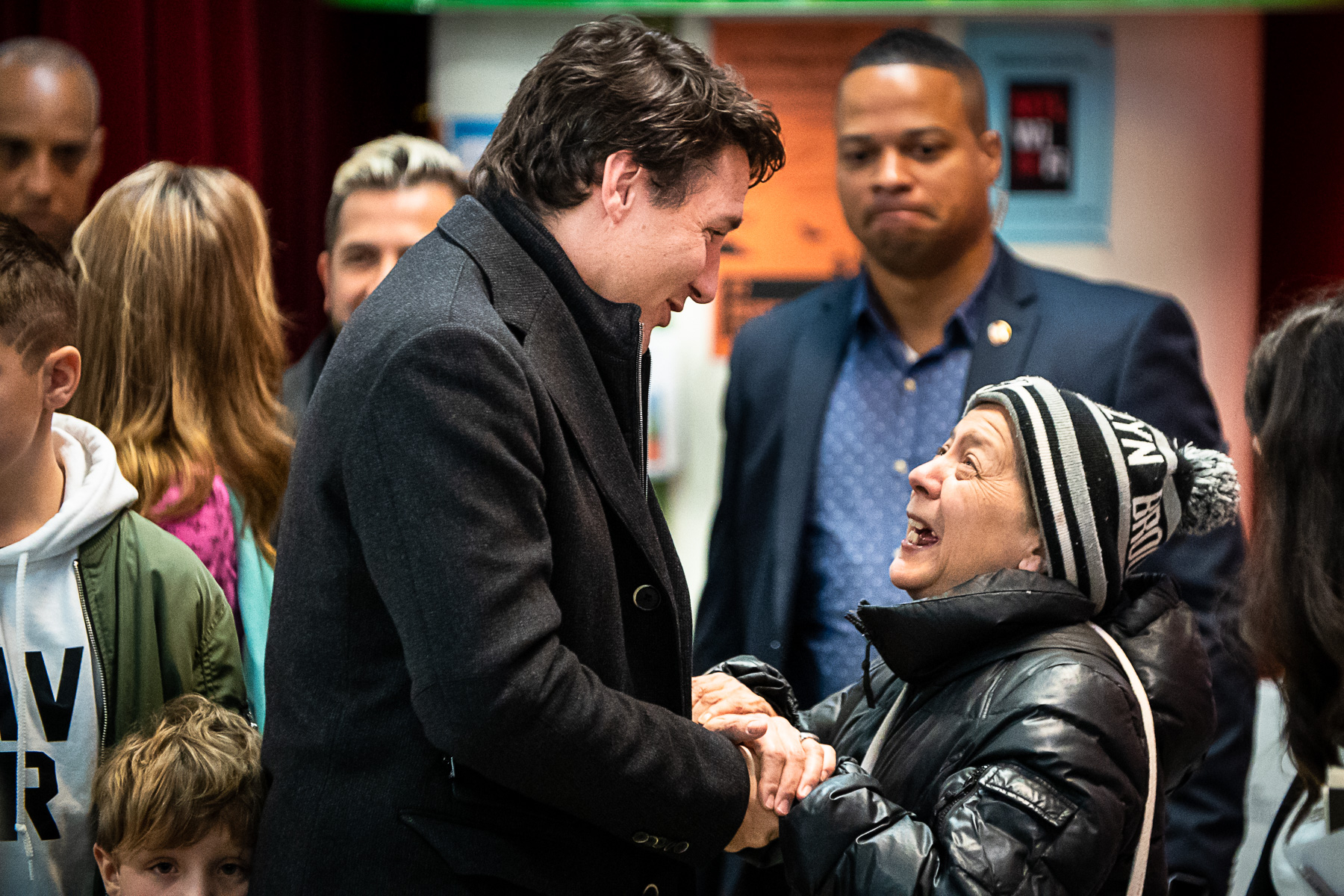 Justin Trudeau votes in his riding of Papineau, Que., in the company of his partner Sophie Grégoire Trudeau and their three kids. File photo by Josie Desmarais
Previous story

As the federal Liberal cabinet holds its retreat in Vancouver, the 11 months since the last election might feel like 11 years. It’s important for them to take stock and think about their relationship with voters and what it would take to win a fourth straight mandate from Canadians when the next election comes, whenever that may be.

In 2015, 6.9 million Canadians marked a ballot for their local Liberal candidate. In 2019, that number dropped to six million. Two years later, the number dropped again, to 5.5 million. It is easy to imagine what happens to the Trudeau government if they shed another half a million votes.

According to our latest Abacus data polling, the Liberals and Conservatives are deadlocked nationally. The regional breaks in the data would produce the same result as last year’s if an election were held now.

Dissatisfaction with the government has been on the rise, but enthusiasm for the Conservative alternative is not growing. Winning another election would be challenging, but far from impossible.

There are some unknowns that could work for — or against — the Liberals’ chances. At the top of the list is the fact Conservatives are poised to choose a leader who may, to date, have generated no enthusiasm outside his party but knows how to deliver a criticism with edge.

To narrow in on what Liberals can do to improve their chances, they could do worse than to remember that one in four Canadians — seven million potential voters — say they would consider voting Liberal but aren’t committed to doing that as of now.

Recently, we did some research to better understand what is keeping those potential Liberal votes at arm’s length by providing a list of possible criticisms of the government and asking whether people agreed.

Here’s what we found among the accessible, but uncommitted Liberal voters:

In short, it’s not one thing but a combination of dissatisfaction and annoyances, some more profound than others. The shape of these results speaks mostly to the chemistry of the relationship between these voters and their government.

Dissatisfaction with the Liberal government is increasing. But with enthusiasm for the Conservative alternative stalling, winning another election would be challenging but far from impossible, writes @abacusdataca chairman @bruceanderson. #cdnpoli

They aren’t sure they want to replace the Liberals; in fact, half approve of the government’s performance.

But they are looking for some changes in what the government focuses on and how it comes across. They want to feel the government better understands their lives, respects them and is focused on getting practical things done that will help them thrive. 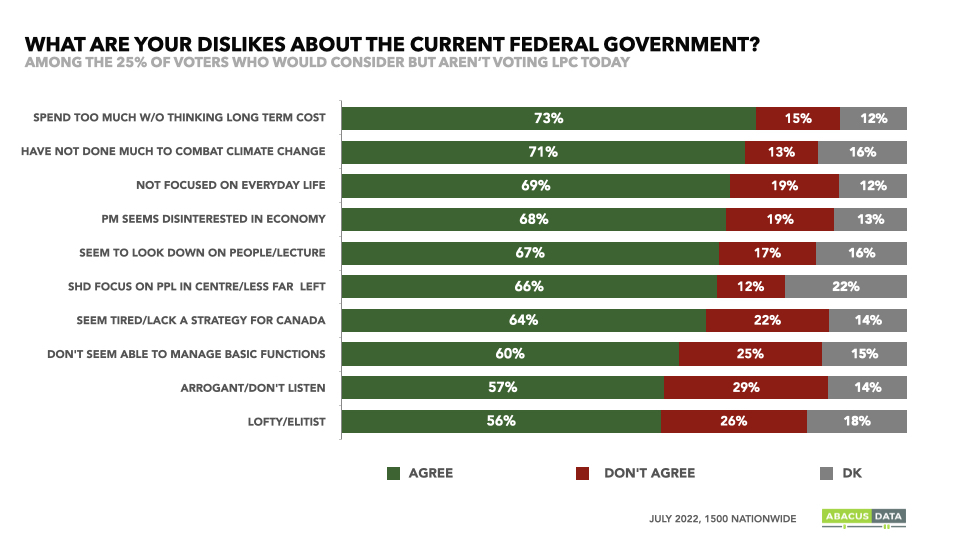 As I read the data, there are a few imperatives for the Liberals to focus on to draw committed support from this large pool of uncommitted voters.

First, the economy is on everyone’s minds. This government can sometimes sound like the economy is somewhere in the middle of its priority list. As people struggle with day-to-day living costs, apprehension about rising interest rates and the possibility of a recession, there’s been little sense of urgency on offer for the last few months. The Liberals are more vulnerable if the ballot question comes down to economic and fiscal credibility, unless they show more intensity, focus and priority. They are not without a story to tell but seem to lack a constant and visible effort to drive and shape the conversation.

Second, any government that grows longer in the tooth starts to sound self-absorbed, self-important and disconnected. Ministers’ lives can look like a series of pleasant meetings with important people, cutting cheques, smiling and travelling. Incumbency starts to look like entitlement, unless there’s very deliberate effort to counter that drift.

(As a side note, this seems more challenging in the era of social media posts — politicians tweeting invocations to “do better” should pause and consider if there isn’t a better way to make the point, one that doesn’t subtly imply a superior-subordinate or holier-than-thou relationship. Twitter on its own doesn’t reach that many people, or undecided voters, but it reaches people who in turn reach almost everyone else, and the cumulative effect can be significant.)

Third, the work of government is about planning a better future but also helping deliver a better today. Pandemic-related strains on public services are grinding and frustrating. Buying lawn chairs for those forced to wait on slow passports undermines confidence that the government can get things done. Showing people that the efforts to hire, ease backlogs and make travel work better are resulting in measurable improvements goes a long way to reassuring people that the government takes daily frustrations seriously.

Some might read this polling data as a need for the Liberals to shift to the right, but that’s not what a closer look at the data reveals. True, people are looking for more attention on economics, but it’s not only right-of-centre voters who feel that way.

A different slicing of our data highlights the 30 per cent of voters who will consider voting either Liberal or NDP. Among them, spending and economic focus are also matters of broad concern. Most of this group shares the feeling that Ottawa could stand to focus more on people on the centre of the spectrum and less on the far left.

Another illustration that the data aren’t about a preference for a right-of-centre approach is the big flashing signal that these voters aren’t convinced enough is being done to combat climate change.

Liberal/NDP voters put this at the top of their list of concerns, but those who would consider either the Liberals or the Conservatives feel the same way. This is probably not a call for different targets or tools, but a reminder that many people may not know the details of what is being tried, but see worrying trends in fires, floods, and droughts. They certainly do not want to see any retreat in climate policy.

In sum, I think people are saying that values and virtue and the larger collective goals remain important, but so too is practicality. And they are signalling a distance has grown between them and their government – one that current communications efforts are not bridging successfully.

Justin Trudeau campaigned on “hope and hard work” in 2015, and as we move (hopefully) from pandemic anxiety through economic uncertainty, people sense that this is the time for more of the hard, perhaps unglamourous work of gutting it out, staying attentive to what isn’t working well enough trying to fix it, and talking about it in terms that people can relate to.

And when it comes to the medium and longer term, voters are looking for a government more inclined to listen to and act on ideas from those outside the government, especially those that will help ensure an economy in which everyone can thrive.

Bruce Anderson is currently the chairman of Abacus Data, one of Canada’s fastest growing and most accurate polling and market research companies. He is also chairman of Summa Communications and a partner in Spark Advocacy. He has provided counsel on communications and advertising to many organizations in the public and private sector, and has also advised politicians in the (defunct) Progressive Conservative Party and the Liberal Party federally.

In short, the Liberal

In short, the Liberal government needs to up their comms game. Perhaps, take a page from Harper and use billboards to promote the things they are doing. Harper spent more money on billboards promoting the Canada Action plan than actually doing the plan. Trudeau is doing the opposite - lots of programs, but not enough advertising.

I don't really trust this

I don't really trust this kind of poll. To be fair, it's hard to do it better, but the thing is that clearly this is based on a bunch of canned answers and asks respondents which of the canned answers they feel are the issue. That means that whatever comes out of it is shaped by the frame the polling company created by making a certain set of canned answers and not some other set. People latch onto the closest available fits to what their real concerns are, but that might not be too close. It's almost push polling.

So for instance, you've got these canned answers about "the economy". Which sounds like people must want neoliberal solutions, because that's what "the economy" is taken to mean these days. But what many of them might mean is, they're dissatisfied that the government isn't cracking down on oil and food profiteering, but the poll doesn't let them say that. And you probably don't have any available canned answers about, say, letting corporate lobbyists dictate policy, which I think plenty of people if presented with that might say yeah, that's something I'm not happy about with the Liberals. Which, mind you, would STILL be push-polling, shaping the results by the answers you offered; people might check that box even if they hadn't really been thinking about it before.

Even people bothered by Liberal spending without considering consequences. The normal media assumption would be that that means people are upset about things like the CERB that give money to too many ordinary people. But they might instead be bothered by big fossil fuel subsidies and spending billions on pipelines with massive cost overruns.

Meanwhile, I personally am happy that I live in a riding where the contest is between the Conservatives and the NDP, with the Liberals an also-ran, so I don't have to worry about voting for the blasted Liberals to keep the Conservatives out. With proportional representation, everyone would be able to vote their conscience.

"Two-thirds would like to feel the government was more focussed on people in the centre than people on the far left.
"A different slicing of our data highlights the 30 per cent of voters who will consider voting either Liberal or NDP. Among them, spending and economic focus are also matters of broad concern. Most of this group shares the feeling that Ottawa could stand to focus more on people on the centre of the spectrum and less on the far left."

Who is the "far left"?
Did the poll define "far left" for poll responders? If so, how?

Is climate a "far left" issue?
71% of possible uncommitted Liberal voters and 64% of possible Liberal/NDP voters aren’t convinced enough is being done to combat climate change. (Those percentages don't make much sense. Why would the left-leaning contingent be lower?)

"The top criticism is that the government has been spending too much money without thinking about the long-term implications."
Yet millions of Canadians, including plenty of Albertans and Alberta corporations, were happy to accept federal COVID supports. And would have marched in the streets had the Liberals failed to provide assistance.
How could the govt tackle climate change without spending billions of dollars to fund the energy shift, public transit, housing retrofits, adaptation, etc?

Key takeway: Canadian voters are irrational. Their views are contradictory. They want to have their cake and eat it too. They want all sorts of stuff, but don't want to pay for it.

Was this a real poll? Based on a random sample of voters?
Abacus Data: "A random sample of panelists were invited to complete the survey from a set of partner panels based on the Lucid exchange platform."
Ipsos: "Most marketing researchers know that using Margin of Error with convenience samples, non-probability samples, and online research panels is inappropriate."
https://www.ipsos.com/en-us/knowledge/consumer-shopper/using-margin-erro...