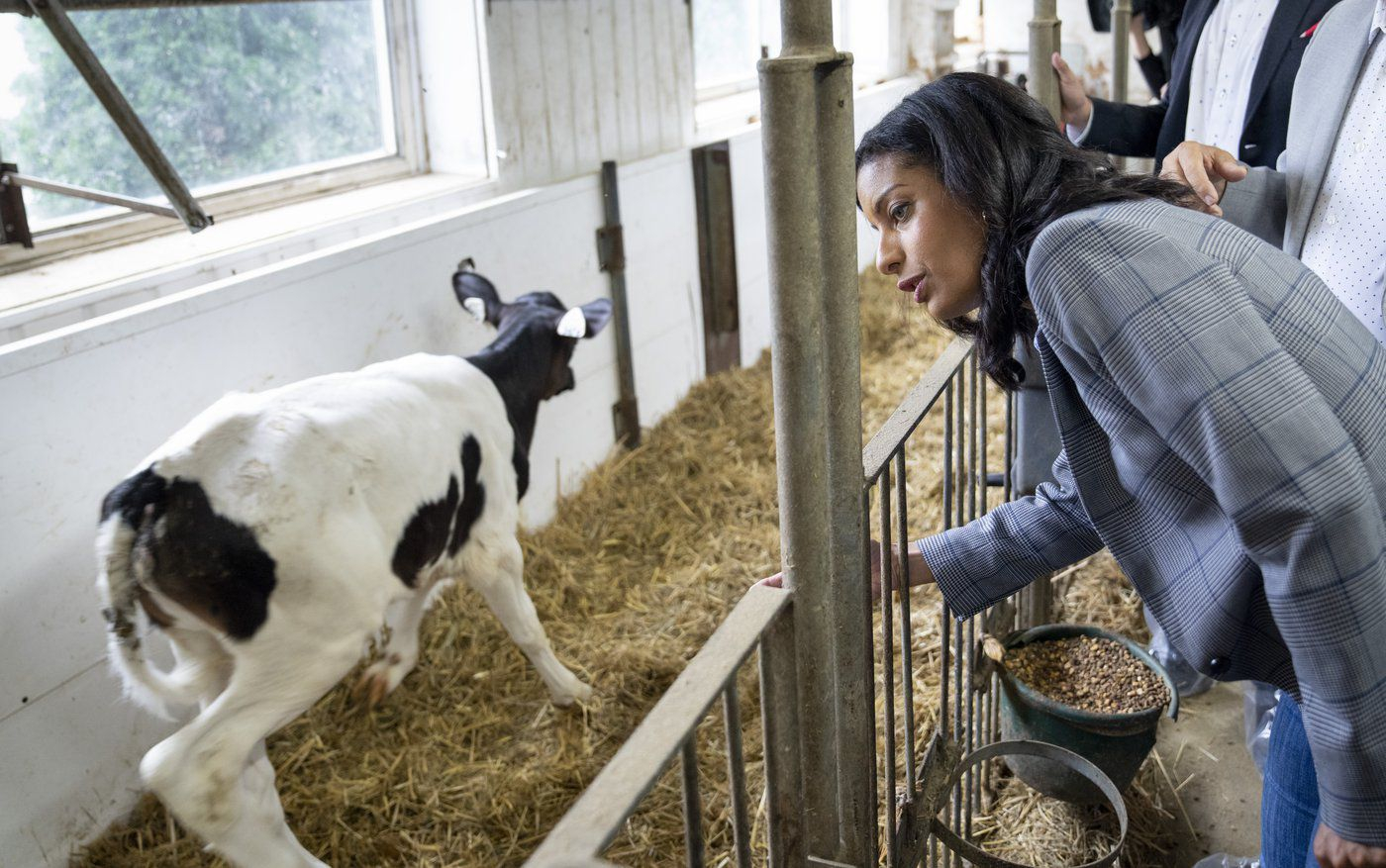 Quebec Liberal Leader Dominique Anglade looks at a calf during a campaign stop at a dairy farm in St-Jacques-le-Mineur, Que., on Wednesday, Sept. 7, 2022. Photo by The Canadian Press/Paul Chiasson
Previous story
Next story

Three of Quebec's main political parties took aim Wednesday at a proposal by Québec solidaire to introduce wealth and inheritance taxes on people with assets worth $1 million or more.

Coalition Avenir Québec Leader François Legault said Quebecers are already stretched to the limit, and with interest rates rising, it's not the time for any new taxes.

The solution is not to create what he dismissed as "the orange taxes" -- a reference to Québec solidaire's signature colour -- "but to really put money back into wallets," Legault told reporters. He then reiterated a promise to give cheques of between $400 and $600 to Quebecers earning up to $100,000 a year.

The comments came in response to a promise made Tuesday by Québec solidaire spokesman Gabriel Nadeau-Dubois to tax wealthy Quebecers in order to raise more money to improve health care and education and to fight climate change.

Quebec Liberal Leader Dominique Anglade called the wealth and inheritance taxes an attack on farmers. Standing in front of a combine harvester during a campaign visit to a farm south of Montreal, Anglade said the value of that single piece of equipment is around $1 million.

It's hard enough to find young people to take up farming, she said, and taxing them more is the wrong policy, adding that there are "millions" of examples of people outside of agriculture who have worked hard and want to leave property to their children.

"When parents have worked their whole lives and decide to leave an inheritance — even if it's just a house — to their children, no, I don't think we should be taxing them," Anglade told reporters.

"This will, in my opinion, cause more problems than it will solve," St-Pierre-Plamondon told reporters in Carleton-sur-Mer, Que., on the Gaspé Peninsula. Québec solidaire's proposal, he added, would encourage people to sell their farms to foreign investment firms.

In response, Nadeau-Dubois said Wednesday that his inheritance tax was never meant to apply to farmland. "It's an essential activity to feed Quebec," he told reporters in Montreal. "We must not add obstacles for the next generation of farmers." Québec solidaire, however, did not mention the farmland exception until after its opponents' attacks.

In countries where wealth taxes have been introduced, there are often questions about what will be excluded, said Tommy Gagné-Dubé, a professor at Université de Sherbrooke who studies taxation and public finance.

"For example, would the primary residence be part of the net assets? If it is, that's a large part of the wealth owned by Canadians," he said in an interview Wednesday.

The high cost and complexity of administering wealth taxes has led many countries to abandon them, Gagné-Dubé said. In 1982, 11 members of Organization for Economic Co-operation and Development, a group of mostly wealthy nations, had wealth taxes. Now, only five do.

"That's not to say that there's no place for this type of tax, it depends on what the objective is," he said, adding that a wealth tax could be a tool to reduce inequality.

Later Wednesday, it was Legault's turn to come under fire after he made comments that appeared to link immigration with extremism.

Speaking to reporters about what he called "challenges of integration," Legault said the "type of society we want," the "values" of that society and "respect" have to be considered.

Anglade, who has regularly accused Legault of trying to divide Quebecers, said his comments were unacceptable.

"If you make a link between violence and immigration, I don't think that sends a very good message," she said. "It's an extremely dangerous conflation."

Legault later apologized on social media for his comments.

"I did not want to associate immigration with violence," he wrote on Twitter. He said immigration benefits Quebec but integration will always be a challenge "for a francophone nation in North America."

This report by The Canadian Press was first published Sept. 7, 2022.

— With files from Patrice Bergeron, Caroline Plante and Stéphane Rolland.