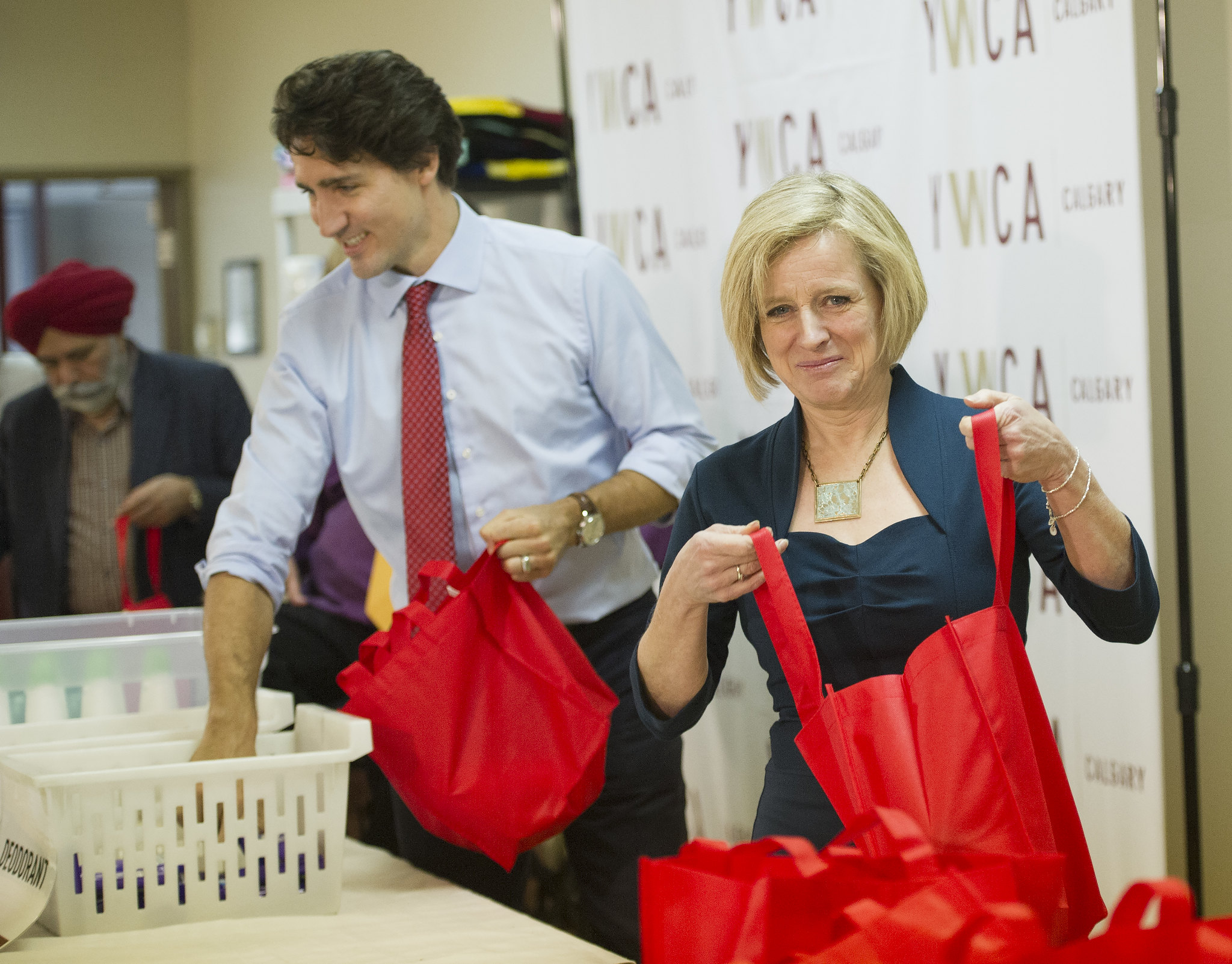 Rachel Notley and Prime Minister Justin Trudeau at the YWCA in Calgary on Feb. 4, 2016 during the prime minister's visit to Alberta. Photo by Chris Schwarz/Government of Alberta/Flickr (CC BY 2.0)
Previous story

With a co-operation agreement with the NDP in place and three years until the next election, Justin Trudeau’s Liberals have some time to figure out how to deal with new Conservative Leader Pierre Poilievre. If he wants to get a head start there, he should have a chat with the Alberta NDP’s Rachel Notley. If he can learn from her experience, he might be able to avoid walking into the same traps that led to a crushing victory for Jason Kenney in 2019.

Kenney, like Poilievre, presented a wide target for a personality-based campaign. His past comments about the LGBTQ community, opposition to so-called “gay-straight alliances” and his work back in the 1980s to overturn a law in San Francisco that extended hospital visitation rights to gay couples all featured prominently in the NDP’s attacks on him. So, too, did his association with high-profile social conservatives, along with his opposition to ambitious climate policy and apparent support of private health care. It was all Kenney, all the time, right from the day he won the leadership of the United Conservative Party in 2017.

But as Graham Thompson wrote in an op-ed for the CBC at the outset of the 2019 provincial election, that obsession may have been a major miscalculation. “Aesop had the boy who cried ‘wolf!’ We seem to have the premier who cried ‘Kenney!’ Eventually, people stop listening.” Instead, he said, the NDP might have been better served emphasizing the good work it had done in government rather than trying to scare voters into re-electing its members. “Has (Notley) made a strategic error by focusing so much of her campaign on UCP Leader Jason Kenney — and so comparatively little on her own record?”

The results, which saw Kenney’s UCP win 63 seats to the Notley NDP’s 24, bore that out. The Trudeau Liberals would be wise to study it closely and ensure they’re not making the same mistakes. Yes, Poilievre has said some odious things in the past, whether that’s using the term “tar baby” in the House of Commons in reference to a carbon tax or suggesting Canadian taxpayers weren’t getting “value for money” in the compensation paid out to the victims of Canada’s residential schools. As such, it will be tempting for Liberals and their proxies to characterize Poilievre as a racist or a bigot.

They should resist it. Those comments were made more than a decade ago, and it will be hard for Liberals to hold his past comments up for scrutiny when their own leader was dressing up in blackface just a few years earlier. Poilievre also has ways to defend himself from these sorts of attacks that Kenney didn’t. While Poilievre voted against same-sex marriage back in 2005, so did a lot of people whose minds have subsequently changed. He has since described it as a “great success,” and it’s hard to imagine the Liberals getting any traction here — especially when he acknowledged his openly gay father and his partner in his victory speech.

And while Poilievre may attract the support of people who oppose immigration and diversity, it’s clear he doesn’t share those values. His wife, Anaida, is originally from Venezuela, and Poilievre talked in his victory speech about their family gatherings where he’s often surrounded by 20 people speaking (and arguing) in Spanish. “We’re a complicated and mixed-up bunch, like most families — like our country.”

If you watch that speech — really, really watch it — you should notice that he’s selling the same basic product that Kenney spent nearly two years hocking in Alberta: hope. It may not be the kind of hope that people who vote Liberal (or NDP in Alberta) subscribe to, but that doesn’t diminish its potency among those who do.

Yes, in both cases, it’s hope that’s predicated on a deliberate misrepresentation of reality and the promise of a return to an idealized past.

Kenney successfully painted the Notley NDP government as solely responsible for the global collapse in oil and gas prices and its impact on the Alberta economy, while Poilievre blames Trudeau’s Liberals entirely for the inflation that’s been COVID-19’s lasting legacy around the world. Both assertions are obviously false. But the relentless repetition of this supposedly causal relationship has made it true in the minds of many voters.

If Trudeau wants to survive the next election, whenever it comes, he has to relentlessly tell his own story. Forget about attacking Poilievre or trying to make him seem less likable. He’ll do that on his own: witness his encounter with Global’s David Akin at his first press conference as leader.

Opinion: If Justin Trudeau wants to survive the next election, whenever it comes, he has to relentlessly tell his own story and forget about attacking Pierre Poilievre, writes columnist @maxfawcett for @NatObserver.

Trudeau should try to regain the upper hand by explaining what his government has done, and is doing, to make the lives of working and middle-class Canadians better. And he must do a better job of contrasting that against what Poilievre would actually do to those lives if elected.

He needs to play the puck, in other words, not the player. Trudeau’s main task must be to sell Canadians on the promise of another Liberal government — no easy feat after nearly a decade in office. He needs to clearly communicate what they’ve done right, own up to what they’ve done wrong and push back aggressively against the misinformation and conspiracy theories that bubble up from the ever-expanding online fever swamps.

There are no guarantees this will ensure his re-election. But if there’s one thing he can learn from Notley’s experience, it’s that making the next election all about your opponent is a good way to get them elected.

One thing about being a

One thing about being a complete a-hole all the time is that occasional flashes of humanity or actual policy DO stand out more, especially if your "base" (cons continue to give new meaning to the word) has a low bar due to low-information.
I keep hearing how "good" Skippy's speech was (I haven't been able to listen to it in part because of who he is but also because of his voice, a nasal monotone drone) and Max references the acceptance of his gay father as an example of the aforementioned, and also a display of personal growth since he voted AGAINST gay marriage in 2005. Well whoop-de-doo but what took him? Many of us know that many of the cons haven't REALLY accepted homosexuality. To the extent that they have, and it's the same with climate change and science generally, it's 1)simply overhwleming societal pressure and/or 2) straight-up appropriation of the more popular progressive platform. Or lip-service to it anyway.
And Trudeau telling HIS story? No, it should be the Liberal one because they are undeniably the "natural governing party." And on governance, I agree that doing things steadily for people/the environment while looking and acting like serious grown-ups is a winner and also happens to show how the whole "small government" mantra of the cons, their guiding premise, has been entirely eclipsed by reality, along with "low taxes." Which leaves them with absolutely nothing to offer in governance.

Being a Liberal, he doesn't

Being a Liberal, he doesn't really have a story of his own. He'll have to instead do what they always do: Tell the NDP's story and pretend it's his.

Oh come on, it's not a personality contest; who cares if you don't like HIM? Why sound like a "tribal NDP" or a tribal ANYTHING for that matter; that automatically makes you part of the problem.
Especially when lines are truly starting to blur on the left with the Liberal/NDP agreement and the self-immolation of the Greens finally hinting at what's needed to unite progressives---the breakdown of the narcissism of small differences.

And to all NDP supporters,

And to all NDP supporters, please be careful what you wish for. In the last 2 federal elections and the last Ontario provincial one, the NDP spent most of their time attacking the Liberals rather than the Conservatives. In the case of Ontario, the result is our public sector nurses are being squeezed out of the profession and our Emergency rooms are closing (BTW, this is on the Provincial government, not the federal).

I agree with the premise of

I agree with the premise of the article. The Liberal Party and PM Trudeau shouldn't be attacking Poilievre head on with accusations of racism, but instead that should be left to the grass roots press. It appears if I read the LPC's messaging that they are mostly focused on just that - telling their story. PMJT did comment that actively voting and campaigning against public health measures is not leadership, but now he should focus on his agenda. I do worry that the NDP may be tempted to bring down this government if they think they may gain a few more seats out of it. The end result could be a CPC majority, and the NDP will have lost its influence over legislation as they did in 2006, and again in 2011.