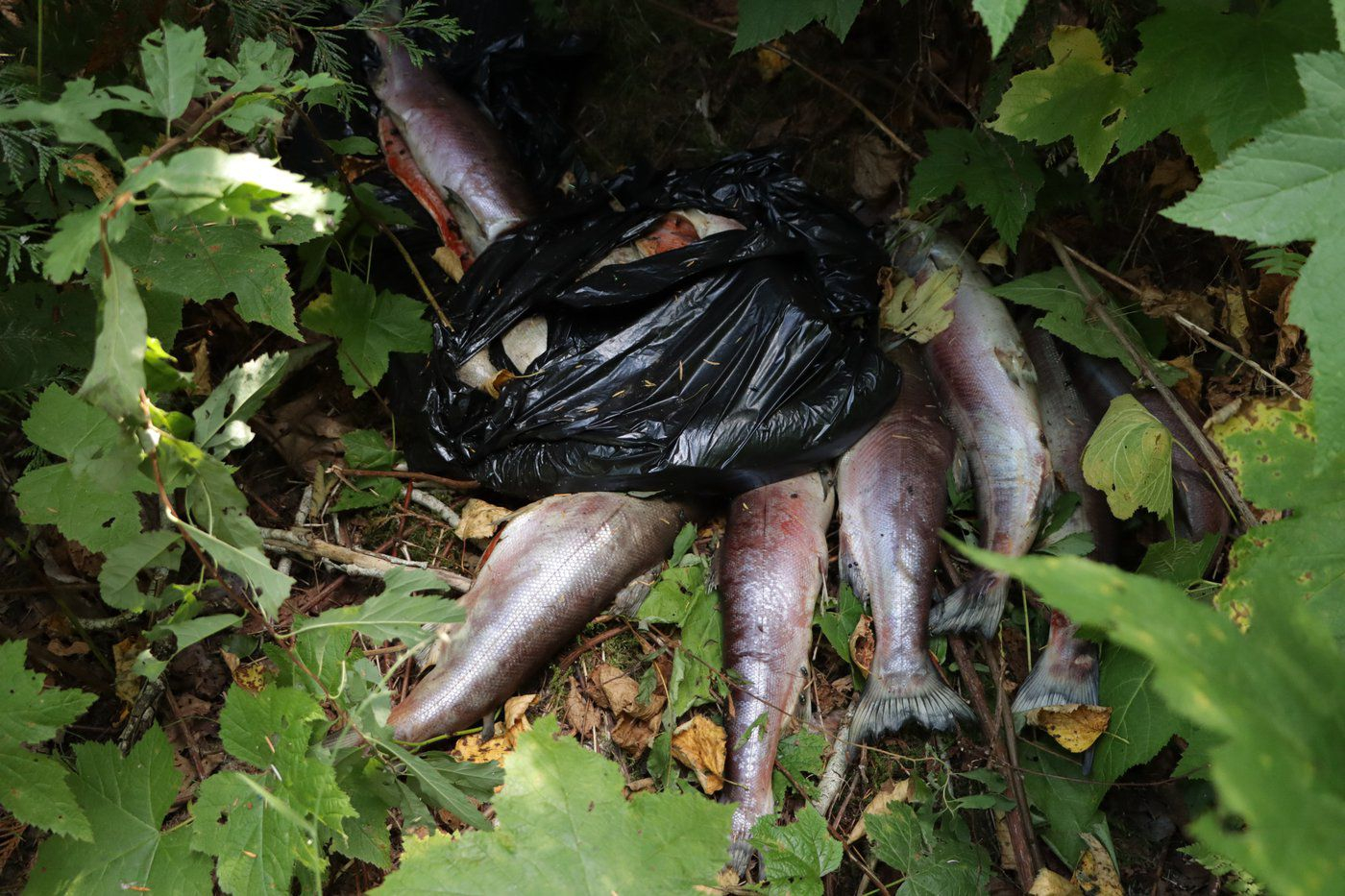 Sockeye salmon carcasses are shown discarded along the shores of the Fraser River in B.C. in this undated handout photo. Handout photo by Rodney Hsu
Previous story
Next story

Rodney Hsu says he has found too many Fraser River sockeye in places they aren't supposed to be this season — from residential areas to gravel roads, wrapped up in garbage bags and rotting in the open air.

Hsu, the man behind sport fishing website "Fishing with Rod," is among those who say the dumped salmon carcasses are evidence of illegal sales.

"Usually when you come across a salmon dumping site it could be a dozen fish, a few dozen fish, or even up to 100 fish being dumped in one area," said Hsu, who is also a member of the Sport Fishing Advisory Committee, a group that advises government on recreational angling issues.

"The conditions of the fish range from somewhat fresh to old and decaying even though they could be freshly dumped. It depends on when you find them."

Hsu and others are calling for stronger enforcement by the federal Fisheries Department and trying to raise public awareness among consumers about the issue affecting a species already facing threats to survival. The department, meanwhile, says it already has a strong enforcement program in place and needs buyers to do their part to stop black-market sales.

Early season forecasts from the Pacific Salmon Commission had predicted 9.8 million fish would return to the Fraser this year but that figure was reduced to 5.5 million last month, drawing concern from environmental groups and fishers alike.

Only a limited commercial fishery was opened for the Fraser River species, while sockeye returned to other B.C. rivers in droves.

The Fraser run is nearing its end for the season, however advocates said the issue is one that still needs attention as it's a perennial problem.

Jesse Zeman, executive director of the B.C. Wildlife Federation, said there are two main clues that the fish are being sold illegally. The first is the number of advertisements that popped up on social media and online classifieds websites for fresh sockeye that happen to be for sale near the Fraser River.

Second, he said only black-market sellers would need to dump fish because regulated vendors have appropriate storage and cooling facilities.

#Poaching fears as #FraserRiver #salmon are dumped to rot, even as returns slump.

"What you see in the black market is the people who are doing this do not have the infrastructure to take care of the fish properly," Zeman said.

Randy Nelson, who worked for the Fisheries Department for 35 years, said he'd like to see the return of a special investigations unit that was disbanded around the time of his retirement as director of conservation and protection for B.C. and Yukon in 2012.

The unit formed in 1985 and was very effective, he said, particularly because it conducted plain-clothes and covert investigations.

Over his time with the department, Nelson said he saw cycles of public demand for more enforcement result in increased resources that would gradually shrink again through budget cuts.

Nelson said he would like to see more sustained funding for the Fisheries Department's enforcement units. Additionally, he said giving the Canadian Coast Guard enforcement powers could add capacity, while he emphasized the importance of documenting poaching over time.

"Enforcement is vital in any kind of law enforcement. The analogy I used is if there's a speed limit on a highway, and nobody ever sees a police car, chances are more people will speed. But the minute somebody sees a police car, they immediately tap the brakes, even if they're not speeding, that's just human reflex," Nelson said.

However, the Fisheries Department said it already has an "fairly aggressive" enforcement program in place.

On a typical day, dozens of enforcement officers are patrolling and new investigations are launched daily, said Mike Fraser, area chief for the Lower Fraser conservation and protection units of the Fisheries Department.

Patrols occur by night, involving plain-clothes officers and by helicopter, he said. Members of the special investigations unit that was disbanded have been folded back into general duty but retain many of their skills, he added.

A team also works with social media companies to remove ads that appear to be illegal, he added.

"It's a fairly intensive program," he said.

There are a number of ongoing investigations, however he noted some take months to complete. Penalties can include fines up to $100,000 and jail time, while buyers may also be ticketed, he said.

Fraser acknowledged that despite the department's efforts, illegal sockeye sales and poaching is still a problem. That's where consumers come in, he said.

"We're asking the public to refrain from purchasing any of these fish that are too good to be true. When you have fish that are priced far lower than you would find in the grocery store or commercial outlet, it's likely that fish is coming from an illegal fishery or being sold illegally," he said.

Health regulation doesn't occur with illegal sales, which also means consumers could be eating fish that may make them sick, he added.

"I think educating the public is a big part of this. As we see our salmon stocks suffering and folks become more aware of the impacts of the activities of not only illegal sales or illegal fishing but also purchasing the fish, I think that's going to be a big deterrent," he said.

This report by The Canadian Press was first published Sept. 22, 2022.