‘This could have been any one of us’: Iranian-Canadian woman calls for change after Mahsa Amini’s death 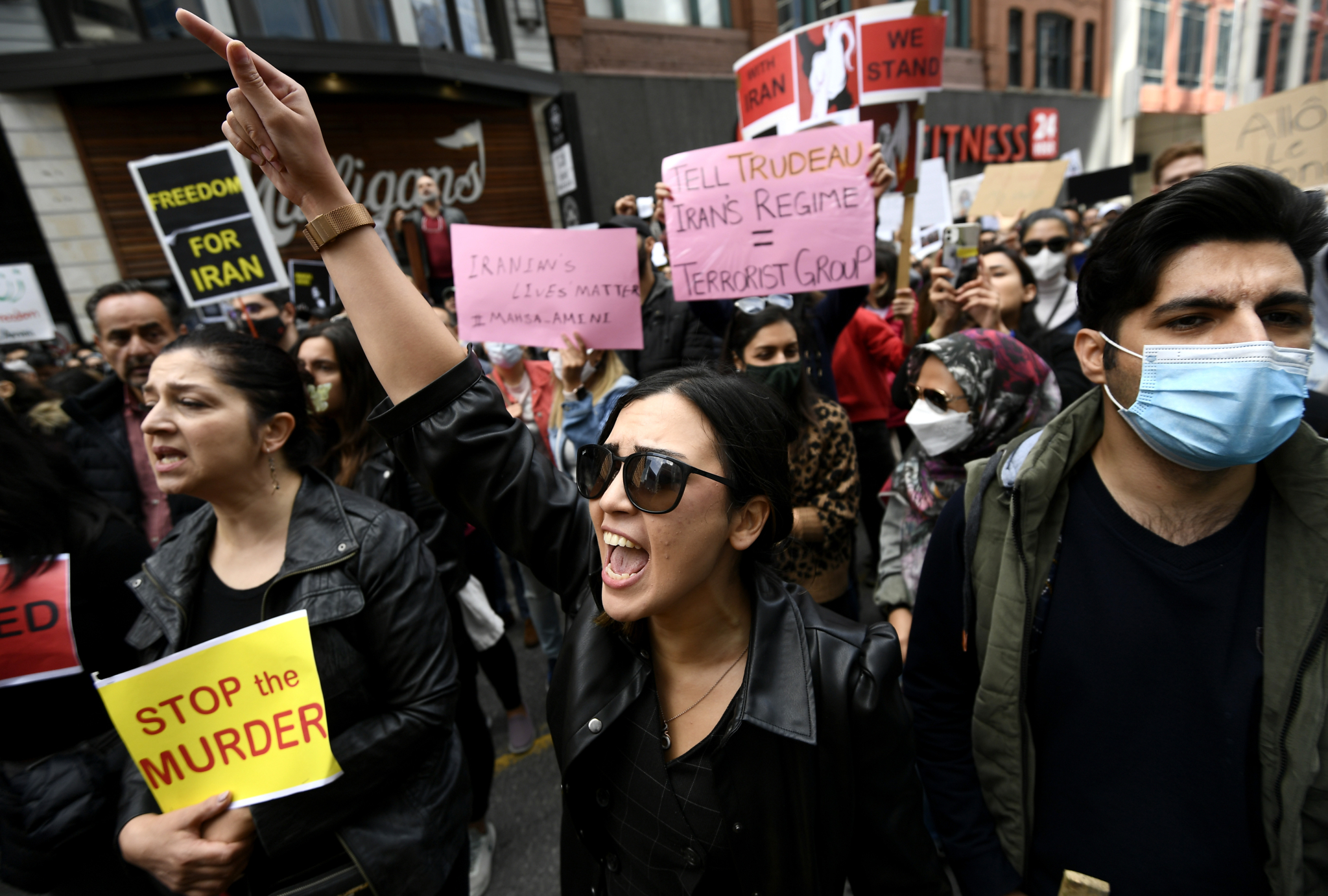 Members of the Iranian community in Ottawa and their supporters rally in solidarity Sept. 25, 2022 with protesters in Iran after 22-year-old Mahsa Amini died in police custody for allegedly improperly wearing a hijab. THE CANADIAN PRESS/Justin Tang
Previous story

When Linda Adams heard the story of a 22-year-old Iranian woman accused of improperly wearing a head scarf dying in police custody, it brought back terrifying memories.

“This could have been any one of us, any Persian girl, Iranian girl, visitor, anybody who just wasn’t wearing their scarf properly,” Adams said.

The death of Mahsa Amini, who was detained earlier this month by Iran's morality police and later died in custody, has sparked outrage around the world. Protests have taken place in dozens of Iranian cities calling for an end to violence and oppression against women as well as a regime change. The Iranian government has responded by restricting internet access. In Canada, thousands of people have taken to the streets, attending protests since the news broke in solidarity with Iranians and Amini.

Adams, who is Iranian-Canadian, once had her own brush with the country’s morality police.

She was in Grade 10 on her first family trip to Iran, her father’s home country, Adams says. Her mother had bought them colourful manteaus — loose-fitting coverups women wear on top of their regular pants and shirts — in different designs.

While in Iran, Adams and her mother were crossing the street, fully covered in their manteaus, she says, when they were pulled over by the “secret” morality police and asked where they were going.

“I remember just feeling so scared, wondering, ‘Is something going to happen right now? I don’t know what I’m doing wrong,’” she said.

They told police they were just going to meet her father, Adams said. “They wouldn’t believe us. They actually thought we were just women on the street, and I’m not too sure why they had that impression. We were following the rules, we had a head scarf on.”

The police escorted them home. Only when Adams’ father explained they were Canadian citizens did the police relax and let them go.

When the Islamic regime began in Iran in 1979, Adams says her father stood against the government and fearing for his safety, changed his last name when he fled the country. When Linda was born, she took their new last name, Adams.

“That’s how much fear has been instilled in so many Iranian-Canadian citizens, people who have fled from Iran and, in general, just the government that stands today,” she said.

Adams believes when something like this happens, it’s important not to shift the responsibility to someone else. “We’re in the 21st century, and these rules and restrictions, the oppression — it’s all outdated. We as women are so powerful and we are even more powerful together when we are supporting one another,” she said.

To people who feel intimidated to speak on the topic, Adams said, “There is no such thing in this instance as following the herd or jumping on the bandwagon. Each voice matters.” She describes it as the bystander effect: “It’s so important that each person shows up and does their part to demand change so we can support one another.”

Adams hasn’t been able to attend a protest yet herself but is planning to do so this weekend. In the meantime, she’s used her social media accounts to raise awareness.

“This is a rippling effect for many other countries in the world, that women can no longer be oppressed; they shouldn’t have been in the first place. We are equal and we deserve to have the right to freedom,” she said.

Adams says people can raise the issue of women’s rights and oppression by showing support at protests, emailing people in positions of power to demand change and using their platforms to share Iranian news.

“Don’t let the conversation die. Once it dies, we lose momentum, and unfortunately, everything just falls flat,” she said.

The next freedom rally for Iran is set to take place Saturday at Yonge Street and 16th Avenue in Richmond Hill.

“As a young girl watching (morality police stop my mother and me in Iran), I was already scared and not willing to go back, even though it’s my dad’s dream to see the beautiful country he once knew,” Adams said. “Unfortunately, that’s not a reality for him, but it is something he still hopes for one day.”