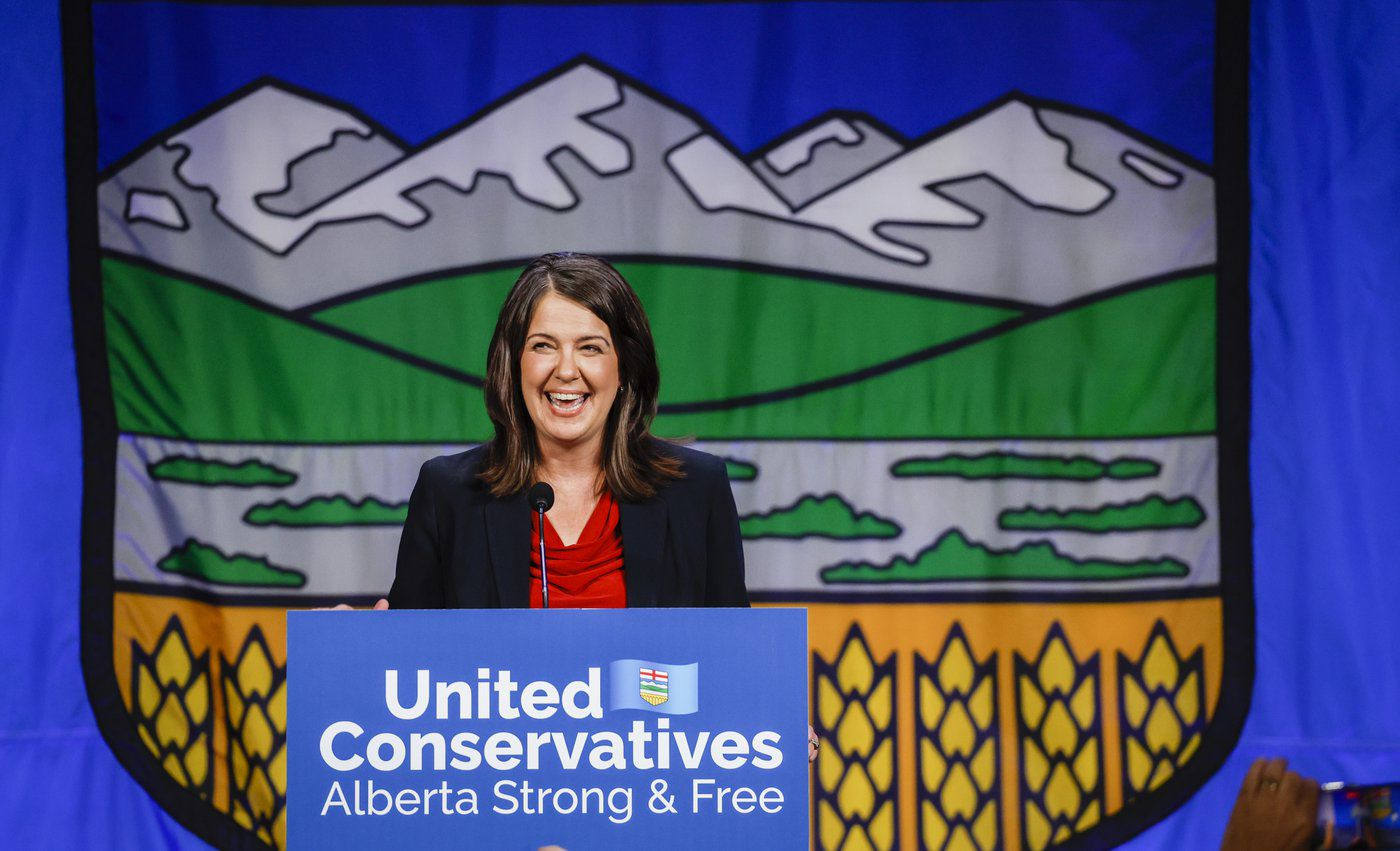 Danielle Smith celebrates after being chosen as the new leader of the United Conservative Party and the next Alberta premier in Calgary, on Thursday, Oct. 6, 2022. Photo by The Canadian Press/Jeff McIntosh
Previous story

Danielle Smith delivered a dramatic political comeback Thursday, winning the leadership of the United Conservative Party to become Alberta’s next premier almost eight years after she decimated the movement with an epic floor crossing.

Smith captured nearly 54 per cent of the vote on the sixth round of the preferential ballot, defeating six rivals and securing the majority needed for victory.

"I’m back!" Smith told a cheering crowd of about 1,500 at BMO Centre in Calgary just before confetti popped around her and blue and white balloons fluttered down from above.

“I am grateful to have earned this second chance from you. I will never forget it and I pledge to you tonight I will not let you down.”

Alberta, thank you for the trust you have placed in me. I am incredibly honoured to be your Premier and will work hard everyday to serve you.

Smith urged the party to bury past grievances and work to defeat Rachel Notley’s Opposition NDP in the May 2023 election.

“I am wiping the slate clean.”

Smith replaces Jason Kenney, who announced he would quit after receiving a tepid 51 per cent support in a leadership review in May.

She won by capturing a core of party members upset over COVID-19 restrictions, provincial vaccine mandates and a federal government they deem to be overstepping its bounds on personal freedoms and with rules strangling Alberta’s oil and gas industry and economy.

She promised a renewed fight against Ottawa, blaming it for monetary policies fuelling inflation.

“It’s time for Alberta to take its place as a senior partner in building a strong and unified Canada. No longer will Alberta ask permission from Ottawa to be prosperous and free,” Smith said to cheers.

“We will not be told what we must put in our bodies in order to work or to travel.

“We will not have our resources landlocked or our energy phased out of existence by virtue-signalling prime ministers.

"Albertans, not Ottawa, will chart our own destiny on our own terms.”

Smith defeated Travis Toews, the finance minister under Kenney, in the final round of balloting. Smith had 42,423 votes and Toews had 36,480.

Aheer, Sawhney and Schulz also served as cabinet ministers under Kenney. Loewen was kicked out of the UCP caucus for criticizing Kenney in 2021.

Smith said Loewen was voted back in this week and will be in attendance when she meets with her caucus Friday. She is to be sworn in as Alberta’s 19th premier in Edmonton on Tuesday.

Kenney was not at the voting announcement but in a tweet said, “Congratulations to Danielle Smith on winning a majority of the vote in the UCP leadership, and to all of those who participated in the process for their commitment to the democratic process. There will be an orderly transition.”

The summer-long leadership campaign saw candidates feud mainly over the best way to fight with the federal government.

Smith, 51, set the pace by proposing an Alberta sovereignty act to allow the province to ignore federal laws and court orders deemed not in its interests, while still somehow remaining within the confines of the Constitution.

She has not explained how that would work and legal experts said that's because it can't. They said the bill as pitched would be illegal, unconstitutional and a backdoor manoeuvre toward separation.

Kenney called the plan "cockamamie'' and a precursor to legal and economic chaos. Five of the candidates also condemned the plan and questioned whether Smith could get it passed.

And she has said she would fire the governing board of Alberta Health Services, the province's arm's-length front-line health-care provider, for botching the pandemic response and leaving hospitals on the brink of collapse.

Toews was not made available for comment after the voting results were announced.

Jean said Smith managed to effectively capitalize on frustration with the federal government.

"She came out of the chute with the sovereignty act and the word itself says a lot," said Jean. “A lot of people are angry, and I think people wanted to show that anger tonight.”

Schulz said it’s time to rally together and move forward.

“I am certainly a team player. I plan on running again,” said Schulz. “And I hope to continue to fight for Albertans, and to put forward a strong team as we head into May of 2023."

Smith left politics under a cloud in 2015 after nearly collapsing the Wildrose in a mass floor crossing to the governing Progressive Conservatives months earlier.

The Wildrose then rallied under Jean and merged with Kenney’s PCs in 2017 to create the UCP.

Smith spent the last six years as a radio talk-show host in Calgary and will have to win a byelection to gain a seat in the legislature. She has said a number of UCP members have offered to step down so she can run.

— With files from Colette Derworiz in Calgary

This report by The Canadian Press was first published on Oct. 6, 2022.