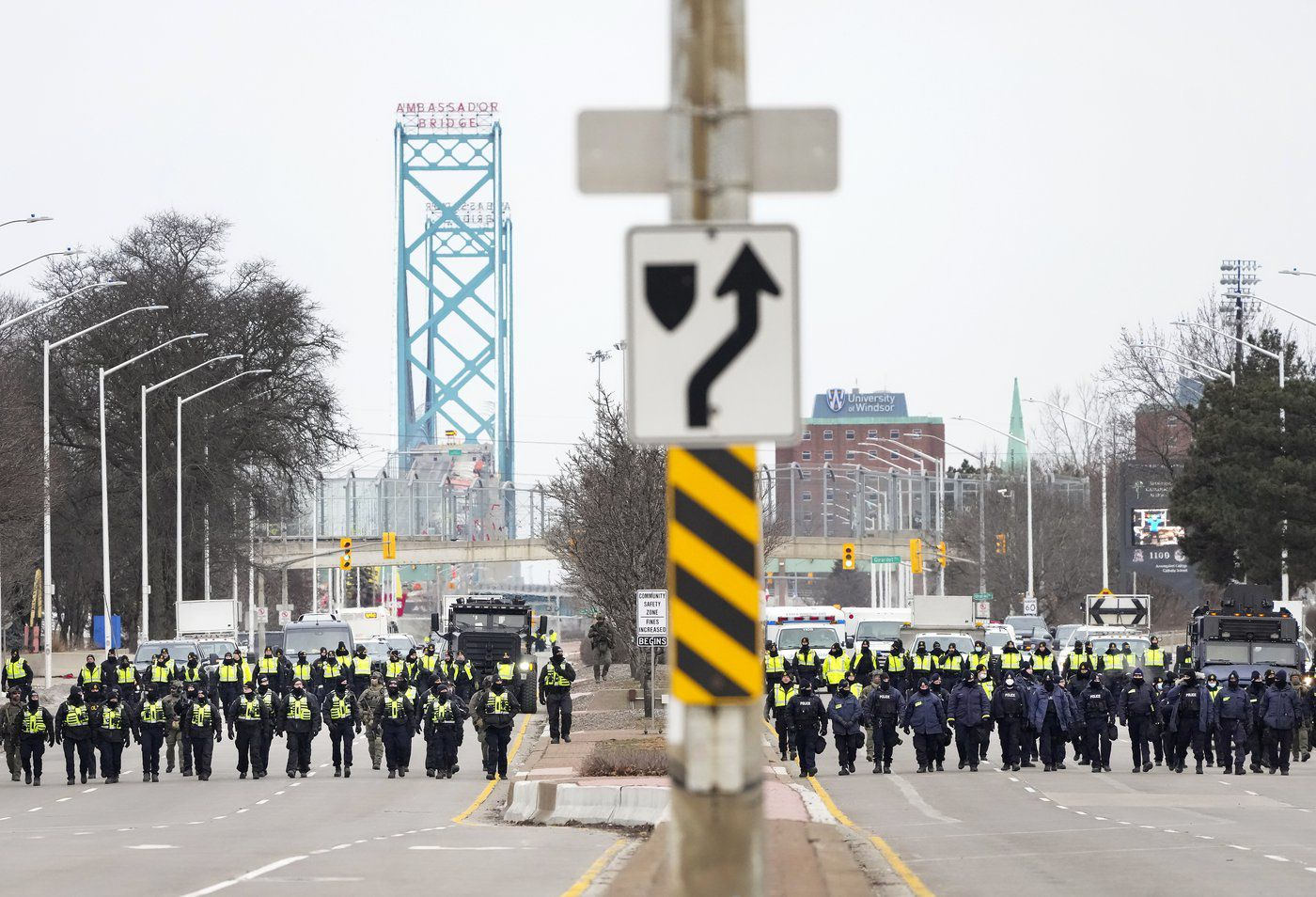 Police walk the line to remove all truckers and supporters after a court injunction gave police the power to enforce the law, in Windsor, Ont., on Feb. 13, 2022. File photo by The Canadian Press/Nathan Denette
Previous story
Next story

Internal documents show the RCMP refused to release the badge numbers of officers who cleared "Freedom Convoy" protesters from the Ambassador Bridge last winter, citing a risk of violence from their supporters.

The situation was detailed in a briefing note and threat assessment prepared for RCMP Commissioner Brenda Lucki, who was asked to approve the decision because the force recognized it raised questions around transparency.

"This will allow you to explain to the membership the substantial efforts made by the RCMP to protect members' safety, while making every effort to meet RCMP's commitment and openness and transparency with the public," read the note to Lucki, released in August to a requester under the Access to Information Act.

The Canadian Press recently obtained a copy of the materials informally through the access law.

The law, which allows members of the public to request files from federal agencies, led the matter to land on Lucki's desk in the first place.

The note to the commissioner, dated last April, says the RCMP received an access request seeking names and badge numbers of every officer who took part in removing protesters from the Ambassador Bridge in Windsor, Ont.

The bridge reopened Feb. 13 after RCMP and other police used a court injunction to force protesters away from the Windsor border crossing.

Lucki was later briefed that the commanding officer of the RCMP's Ontario division was among those who "raised significant concerns" about releasing the badge numbers and names of officers involved "given a large number of threats against personnel involved in the convoy protests."

To illustrate their point, Ontario RCMP prepared an intelligence brief containing screenshots of 12 messages shared on the Telegram group Convoy to Ottawa 2022.

In one message, a user wrote: "These pigs deserve to die period." Another suggested cops need to be doxed — the act of publicizing someone's personal information online, which can lead to harassment.

"We need to fix every cop in Ontario," read a different one.

The brief also pointed to the arrests of four men who had blockaded a border crossing in southern Alberta and were charged with conspiracy to commit murder. Police allege two of the men were connected with the far-right extremists of Diagolon.

Some RCMP members also reported receiving death threats, including against their families, after their names and cellphone numbers were released through leaked messages initially shared in an RCMP Musical Ride group chat, the brief said.

"It is conceivable from this experience that were a significant number of (members') information to be shared from the Freedom Convoy 2022 Windsor Crossing, and members from the same tactical troop to be doxed, whole units would need to be sidelined as a result while the situation is assessed and mitigation measures undertaken."

RCMP spokeswoman Robin Percival said in a statement the force withheld the information in question since it could "reasonably be expected to threaten the safety" of officers.

Doing so is allowed under a section of the Access to Information Act, though that exemption can be challenged to the federal information commissioner, who investigates complaints related to the access law.

Citing confidentiality, a spokesperson for the office wouldn't divulge if it received a complaint regarding the request, saying only that it publishes decisions from investigations on its website.

The RCMP have been accused of shielding the identities of officers subject to complaints of overly aggressive behaviour, such as during protests in British Columbia against old-growth forest logging at Fairy Creek, he said.

But Monaghan said that wasn't the case at the Ambassador Bridge, where it appears officers carried out "textbook public order policing," not always seen at other demonstrations.

"The convoy flips everything around," he says, "All of a sudden, we have a situation where the police don't want to release names and numbers, but not necessarily for accountability reasons … but they have a legitimate concern about these people being wackos."

That leads to a tricky situation, he suggested, because police deciding to withhold the names and badge information of officers could set a bad precedent.

"There's this irony that this is an organization that has abused this power for a long time."

Last year, the chief of Halifax Regional Police asked the public for information on reports that officers tasked with clearing a homeless encampment in the city had removed their name tags.

The note to Lucki says the RCMP would emphasize that the Ambassador Bridge scenario "presented an exceptional case" involving clear, credible threats and did not reflect a change in policy preventing the release of employee information requested under the access law.

This report by The Canadian Press was first published Oct. 17, 2022.