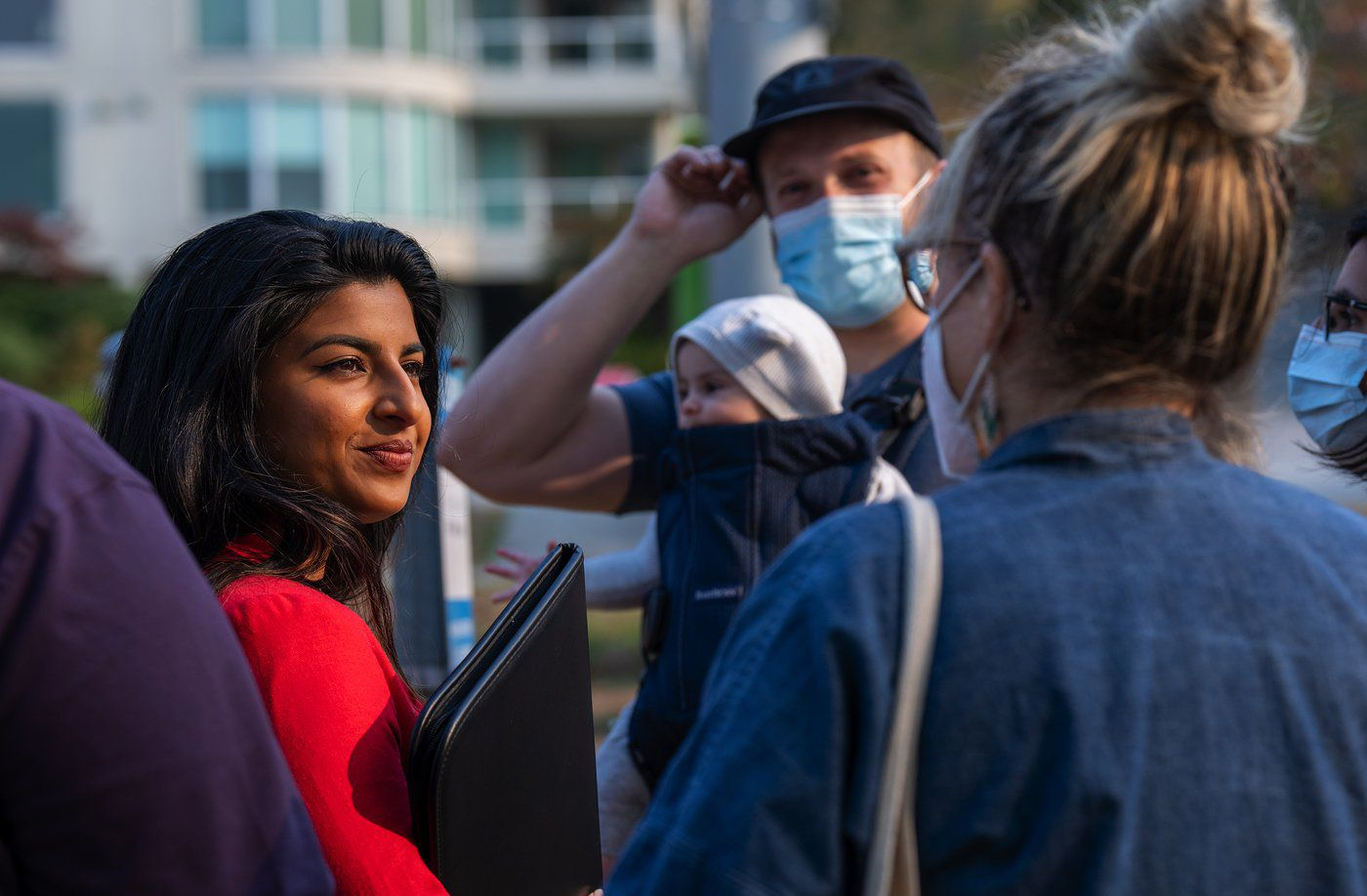 One of two candidates running for the British Columbia NDP leadership has been disqualified, clearing the way for former attorney general David Eby to become premier of the province.

A news release Wednesday following a meeting of the NDP executive and issued on behalf of party president Aaron Sumexheltza said Anjali Appadurai is out of the running for the leadership as a sanction for violating the rules.

A report by NDP chief electoral officer Elizabeth Cull obtained by The Canadian Press concluded Appadurai "engaged in serious improper conduct" by working with third parties for membership drives on her behalf.

The report concluded that the harm from the misconduct can't be remedied with anything short of disqualification of the Appadurai Campaign.

He said this has been a challenging period for members of the party and he thanked Cull and the party's table officers and the executive for their dedication.

"I know they did not make this decision lightly."

Board members met for several hours Wednesday night before releasing the decision.

"As there is only one approved candidate in the leadership race, the CEO is considering moving up the election date and will have more to say on this tomorrow," the statement said.

Eby will replace Premier John Horgan, who said he would leave his post for health reasons in December when the leadership vote was scheduled.

Eby couldn’t immediately be reached for comment, but said earlier Wednesday that he was focusing his campaign by touring the province.

"The party has their process around ensuring the fairness of the race. They're going to focus on that process. I have confidence in them to be able to do that," he said at an event in Vancouver.

Before the vote Wednesday, Appadurai urged the party executive not to use what she called an undemocratic "nuclear option" to disqualify her.

Cull’s report said Appadurai breached the contest rules by forming as an alliance with an environmental group and wooing of former B.C. Green Party members. A friend of Appadurai offered to pay the $10 fee for people’s memberships during a live social media event, the report said.

Appadurai denied her campaign had done anything wrong and said in written remarks to party executives that Cull's investigation was done to support a "predetermined conclusion."

She said her team used grassroots organizing to sign up thousands of new members to vote in the race — significantly more than Eby.

"And so, the party had a choice. Let all the members of the party, new and old, choose the next leader and risk having a climate champion in the premier seat or take this undemocratic approach and disqualify the candidate," Appadurai said at a news conference in Vancouver on Wednesday before the decision was announced.

"It's distressing that they have taken the nuclear option, that risks ripping the party apart, further alienating the grassroots, tainting the new administration, and damaging the NDP chances in the next election in 2024."

Membership of the party was said to number 11,000 at its most recent convention, but the party has not confirmed that, nor how many new members had joined.

Appadurai said earlier she did not have an exact estimate of the numbers of new NDP members her campaign signed up, but suggested it could be as high as 14,000.

Appadurai told reporters a ruling against her campaign could be fought in an appeal process, but the campaign hasn't decided if it would do so.

Cull's report found there was "improper co-ordination" between the Appadurai campaign and the environmental group Dogwood BC, which used mass emails, text messages, social media and phone banks as part of a drive to recruit NDP supporters.

"The improper co-ordination with third parties (primarily Dogwood) played such a significant role in the Appadurai campaign that it is impossible to create a level playing field at this point, and thus impossible to restore the leadership election campaign to a state of integrity in which I could have confidence," the report says.

Cull highlighted an Aug. 6 Zoom meeting Appadurai held with supporters, including Dogwood, where she challenged those in attendance to recruit members and Dogwood committed to using its resources.

In a statement, Dogwood denied it broke any rules.

"Third parties like unions, businesses, faith groups and NGOs are allowed to encourage supporters to join a political party. Social movements are core to grassroots democracy in B.C., and sign-up drives are part of every leadership race."

Appadurai said there's no evidence to support that claim.

"There is nothing wrong when someone joins our party from another party hoping that under new leadership, the party will embrace a more ambitious direction," she said.

"There's equally nothing wrong with that person cancelling their membership and joining another party if our party doesn't elect their preferred candidate."

A spot check of new membership applications had since found only 72 per cent of the individuals contacted were deemed to have valid memberships, she reported.

A political communications expert who read the Cull report said he agreed with the conclusion to disqualify Appadurai.

“The insurgent candidacy from Anjali Appadurai is on its face problematic,” said Prof. David Black, at the school of communications and culture at Royal Roads University in Victoria.

“They just crossed a number of lines here, so I think the NDP is on the right side of this issue,” he said.

But Black said the party now faces the issue of convincing supporters and B.C. voters that Eby is the right person to succeed Horgan without facing a membership vote.

“It’s going to take some fancy public relations footwork to ensure the public and the membership that the party has made a difficult but right decision to preserve the integrity of their own leadership electoral process,” he said.

This report by The Canadian Press was first published Oct. 19, 2022.

I called this as bullshit

I called this as bullshit when the Conservatives did it to help the coronation of Poilievre, I call it bullshit now. What the hell, BC NDP? Think I'll stay home on election day. The BC Liberals are evil and crooked. The Greens have nothing outside of environmental issues, with their stupid "neither left nor right" thing. Now the NDP are bastards. I can't believe they pulled this crap.

This highlights the absolute

This highlights the absolute idiocy of the process of selecting a new leader- especially when that leader will be the head of government. Under the present system, the new leader is chosen by party members...who may not, as is likely the case here, have even voted for the party in the last election! So a one-issue candidate puts herself forward - one with no elected experience and no seat in Parliament. She sells lots of new memberships...possibly violating rules. What would have been the outcome if she had been allowed to continue to run and won? We would have a Premier selected by a flawed process...one with no experience at any level of government, without a seat (so someone else would have to stand in for her until she managed to get a seat) and one without the support of the present caucus. Recipe for chaos! How much better it would be for the existing caucus to make a choice from within their ranks. At least that person would have experience and a seat. Let me be clear that, as one who voted for the BC NDP in the last election, I am also disappointed in their environmental policies since they took office. Anjali Appadurai may make a fine MLA - even a fine Premier - one day but being Premier is not an entry level job!

She woke up a few "Old Boy"

She woke up a few "Old Boy" NDPers, though, eh? Perhaps she succeeded after all. But I've got to say, people are talking like we — and the NDP — have time to come around to doing the right thing on climate change. We don't. As someone with more knowledge of the climate emergency than most, I can tell you that a leader with nothing but a commitment to mitigating climate disruption would be better than anyone else with "government experience" without that commitment (Eby, for example). Climate change is no longer merely "environmental policy." And "recipe for chaos"? You have no idea what climate chaos is doing around the world and will continue to unleash in BC.
p.s. The BCNDP is refunding new memberships ... but you might have to ask for it.