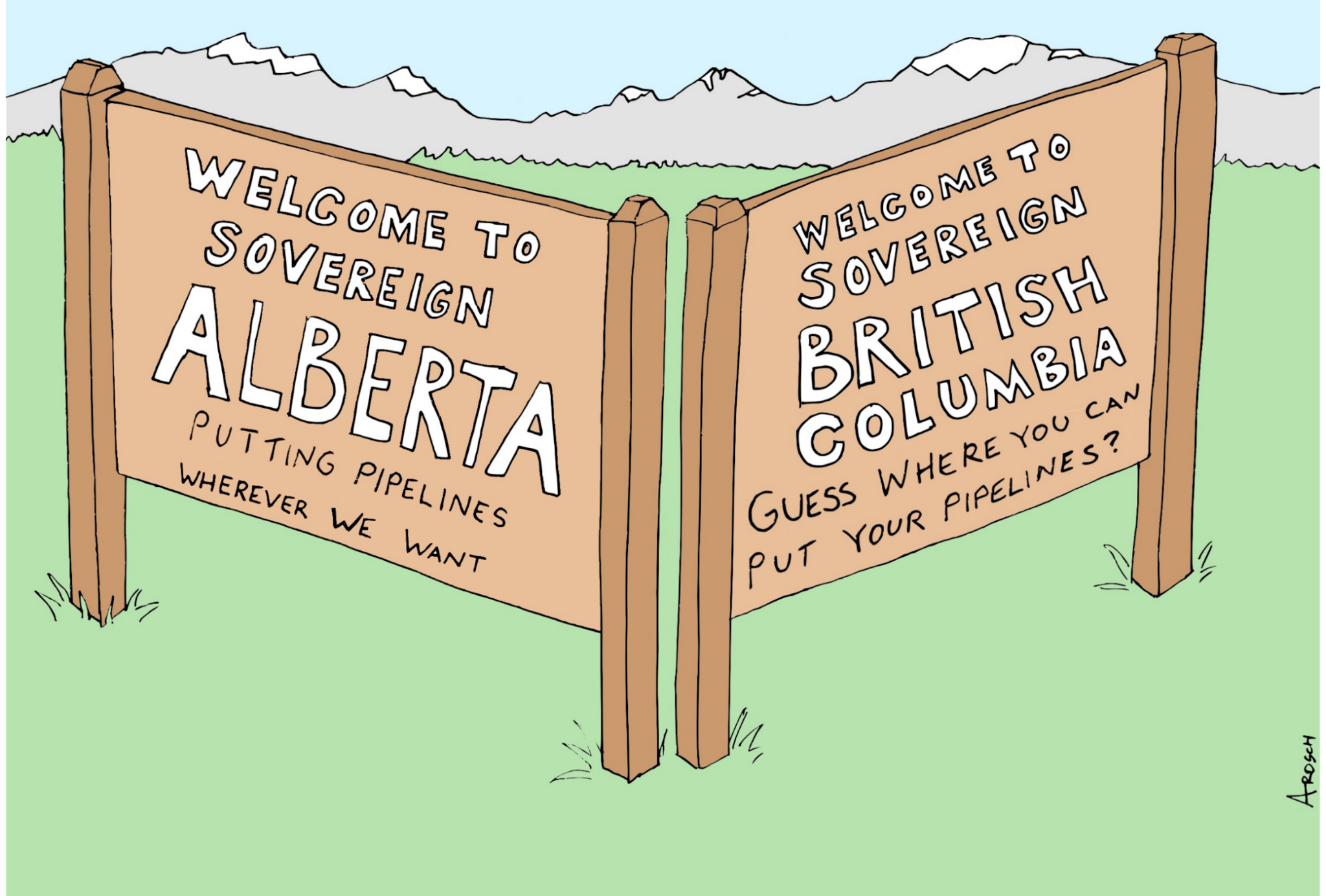 For months, Danielle Smith promised Alberta’s United Conservative Party members that she would take the fight to Ottawa with her Alberta Sovereignty Act. That fight included disregarding federal laws and refusing to adhere to court rulings that didn’t flatter Alberta’s interests, which apparently revolve entirely around vaccine mandates and pipelines. But less than 72 hours after winning the leadership of her party, she was forced to make a concession to reality.

Rob Anderson, her campaign chair and executive director of her transition team, told CBC the proposed legislation wouldn’t actually empower Alberta to disregard Canada’s Supreme Court, as almost every constitutional expert in Alberta had tried to tell her campaign. One of them, University of Calgary law professor Martin Olszynski, told the Canadian Press’s Dean Bennett that “if suddenly now the premier-designate and her office are prepared to say, 'Of course, we're bound by the courts,' then the sovereignty act goes nowhere."

This wouldn’t be the first time Smith has disappointed her supporters. Back in 2014, after all, she crossed the floor as the leader of the Wildrose Party along with eight other MLAs to join Jim Prentice’s Tories, which went on to lose to the NDP in 2015. But the biggest disappointment may be yet to come. That’s because she still plans to wage war on Ottawa, and her method of choice could end up costing Alberta the very thing it values the most: market access for its oil and gas.

Smith’s government still intends to pass some watered-down version of her Alberta Sovereignty Act, one Anderson said will “have a whole head of very sharp teeth” and “change the dynamic” with the federal government. But those teeth could easily end up biting Alberta in the ass, and perhaps much sooner than anyone in the Smith camp seems to understand. If Alberta can somehow pick and choose which aspects of federal authority it wants to recognize and chooses to use the legal system to frustrate the federal government with frivolous appeals and actions, so can other provinces.

British Columbia, for example, just happens to be in the midst of a leadership race of its own by the governing party, one that could yield a new premier who’s the yin to Smith’s constitutional yang. Anjali Appadurai, the 32-year-old director of campaigns for the David Suzuki Institute’s Climate Emergency Unit, is mounting a major challenge to the presumed coronation of David Eby as the BC NDP’s next leader. If Appadurai wins and becomes the next premier of British Columbia in December, finding a way to stop the Trans Mountain pipeline expansion will almost certainly be one of her first priorities.

Back in 2021 when Appadurai was running for federal office in Vancouver-Granville, she signed a pledge committing that she would “do everything in my power as MP to cancel #TMX if I am in office.” Just last month, she spoke at an anti-TMX rally in Burnaby, telling the approximately 150 attendees that she was “so grateful to be here among friends, among movement, among allies.”

Smith’s Alberta Sovereignty Act, and the precedent it would set, would give Appadurai an easy way to continue her long-standing resistance to the project. Appadurai could proceed with the proposed provincial regulations on the transportation of bitumen and other hydrocarbons that John Horgan’s government referred to the British Columbia Court of Appeal, and which seemed designed to stop the flow of heavy oil from Alberta. Those regulations were rejected unanimously by both the BC Court of Appeal and the Supreme Court of Canada, with Justice Michael Moldaver describing the bill as an attempt to “throw up barriers that will, at a minimum, delay or obstruct” pipeline projects like TMX.

But as University of Saskatchewan law professor Jason MacLean wrote in a 2018 op-ed for the Globe and Mail, there’s a way to write those regulations that doesn’t interfere with the federal government’s jurisdiction. “As a matter of constitutional law, so long as B.C.'s safety regulations are enacted in a bona fide manner to protect British Columbia's environment and economy from bitumen spills, and not as an indirect way of usurping the federal government's approval of Trans Mountain, the courts should uphold them.” Appadurai may be eager to find out if a revised version of these regulations can pass constitutional muster — more eager, perhaps, than Horgan ever was.

Then there’s Smith’s promise to rechallenge the Supreme Court of Canada’s 2021 decision upholding the constitutionality of the federal government’s Greenhouse Gas Pollution Pricing Act. “Supreme Court rulings also can be challenged on the basis of new evidence,” she said last week. “When you look at the carbon tax as an example, that’s one I would like to re-litigate. It was argued on very narrow grounds, and I think the world has changed since that decision came down.”

None of the changes Smith cites, from inflation to affordability issues to the war in Ukraine, have any bearing on the constitutional merits of the federal government’s carbon tax. The case would almost certainly be dismissed out of hand. But if she can cite world events as a reason why constitutional arguments need to be reassessed, so could a Premier Appadurai. She might point to the massive cost overruns on TMX or the ever more urgent necessity of decarbonization in defence of her own frivolous appeal and demand the reassessment of some key decision or ruling.

Opinion: This is the problem with playing stupid games: sometimes, you end up winning a really stupid prize. Columnist @maxfawcett writes for @NatObserver.

She could, in short, pursue the same sort of constitutional malarkey Smith has promised to inflict on Canada. The federal government, for its part, may have no choice but to suspend the construction of TMX until these new legal issues are settled. Yes, that would damage Alberta’s oil and gas industry and interfere with its government’s desire to see more pipelines built. But as Premier Smith said, “Unity comes from respecting that each jurisdiction likes to do things in its own way, and that’s the conversation that we’re going to force.” One wonders if she’ll be able to appreciate the irony when that conversation gets forced back on her.

This is the problem with playing stupid games: sometimes, you end up winning a really stupid prize. In Alberta, there might be nothing stupider than sabotaging the one pipeline to tidewater that’s managed to get approved and built. Even former premier Jason Kenney, for all of his well-documented short-sightedness, could see this one coming a mile away. “Wait until B.C. gets the idea that they can play the same game to block our pipelines,” he said back in September.

Smith, who has yet to be elected to the legislature, still has time to change her mind here. But after already doing it once on her signature piece of legislation, the odds are against it happening again.

It's not enough for Poilievre to condemn misogyny. He must also promise to tackle online harms

Good points in the article

Good points in the article but I really don’t like the inference that Anjali Appadurai is a “stupid “ prize. She is well worth considering as the next premier.

I didn't take away that

I didn't take away that inference, at all.

Lot's of other pithy clichés came to mind, though, to capture the situation: can of worms; genie and bottle; goose and gander; etc.

In any event, I've read elsewhere that the NDP has a deus ex machina statute in their election rules that allows the party leadership to choose to set aside any result they don't like. So, it will be interesting to see what happens. Certainly, the BC NDP is no ally of the ecological integrity of the province.

I'd be interested in just where the "elsewhere" is that you read that, because it sounds a bit unlikely. Certainly it's never actually happened, and it's obvious that no matter how cynical some party leadership might be, it would be an incredibly politically damaging thing to do, so I don't see it as relevant.

There are two additional

There are two additional points that could be brought forward by BC in another constitutional challenge of what is now a gold plated pipe.

One would be the absence of an independent, professional and thorough risk assessment specifically to marine ecosystems and the coastal economy from diluted bitumen spills, considering as many models of volumetric and weather related variations as possible. The only analysis conducted during the approval phases were so inadequate they were deemed comical.

The other would be the fact that BC actually owns the shoreline and seabed surrounding and under all inland seas, which just so happens to be the entire 250+ km contorted route to the open Pacific. This was confirmed by the Supreme Court of Canada in 1984 (ironically, when BC itself was considering offshore oil and gas drilling). This decision never was, to my knowledge, brought up as jurisdictional precedence in a case that was decided on basic jurisdiction alone.

It would be sweet irony if another federal government decided in future to cross provincial boundaries with a national-scale smart electricity grid carrying power exclusively from zero emission sources, using TMX as legal justification to quash provincial boundary related objections. Electricity, after all, will be displacing more fossil fuels as time goes by.

I believe the TMX ruling also defined the contents of the pipe as being federally-owned. That could also apply to electricity; once private suppliers or provincial utilities sell their power to a federal electricity transmission outfit, it becomes federal property. Of course, the revenues from power sales will have to be shared (especially to the US), and the utility tariff charged would be balanced to ensure suppliers are profiting, but also the sale price is reasonable to buyers.

Power trading between provinces could be very beneficial in terms of offsetting maintenance, repair and replacement costs, but that could also become contentious among power fiefdoms not known for their allegiance to national energy security. Still, it's hard to see how BC Hydro would object to selling power to the US eastern seaboard, or Quebec Hydro to California via a national clean energy corridor.

In a perfect world, TMX would be thwarted, possibly by BC as more complex constitutional issues are brought forward to the highest court for clarity. And mass electrification will be catalyzed by building a national electricity corridor run by an agency mandated not just to purchase renewable power, but to invest directly in new generation capacity under a National Climate Project.

And ... the TMX right of way would be a great controlled space in which to build a trans provincial [electricity] power line from sunny, windy, and geothermally rich Alberta to rainy BC with minimal additional ecological damage.
Let's lobby for positive change, rather than negative antagonism; make oil energy uncompetitive.
Electrify everything!

A shipper doesn't own the

A shipper doesn't own the cargo by virtue of its carriage, and usually payment depends upon performance: safe delivery within the agreed-upon time. Pipelines' owners charge the oilcos to use the pipee. The owners of transmission lines charge the purchasers for delivery (unless the purchaser owns the lines ... and that's another scheme).

OTOH, Ontario refuses to purchase (clean) electricity from Quebec, choosing instead to open new gasfields and new gas-produced electricity generating stations. So does the IESO, which continues to operate in bad faith as regards climate-friendly solutions to projected increasing demand for electricity.

"Of course, the revenues from power sales will have to be shared (especially to the US), and the utility tariff charged would be balanced to ensure suppliers are profiting, but also the sale price is reasonable to buyers."

Hunh? Why? Is the US King of The World, such that it gets a share of everything produced everywhere?