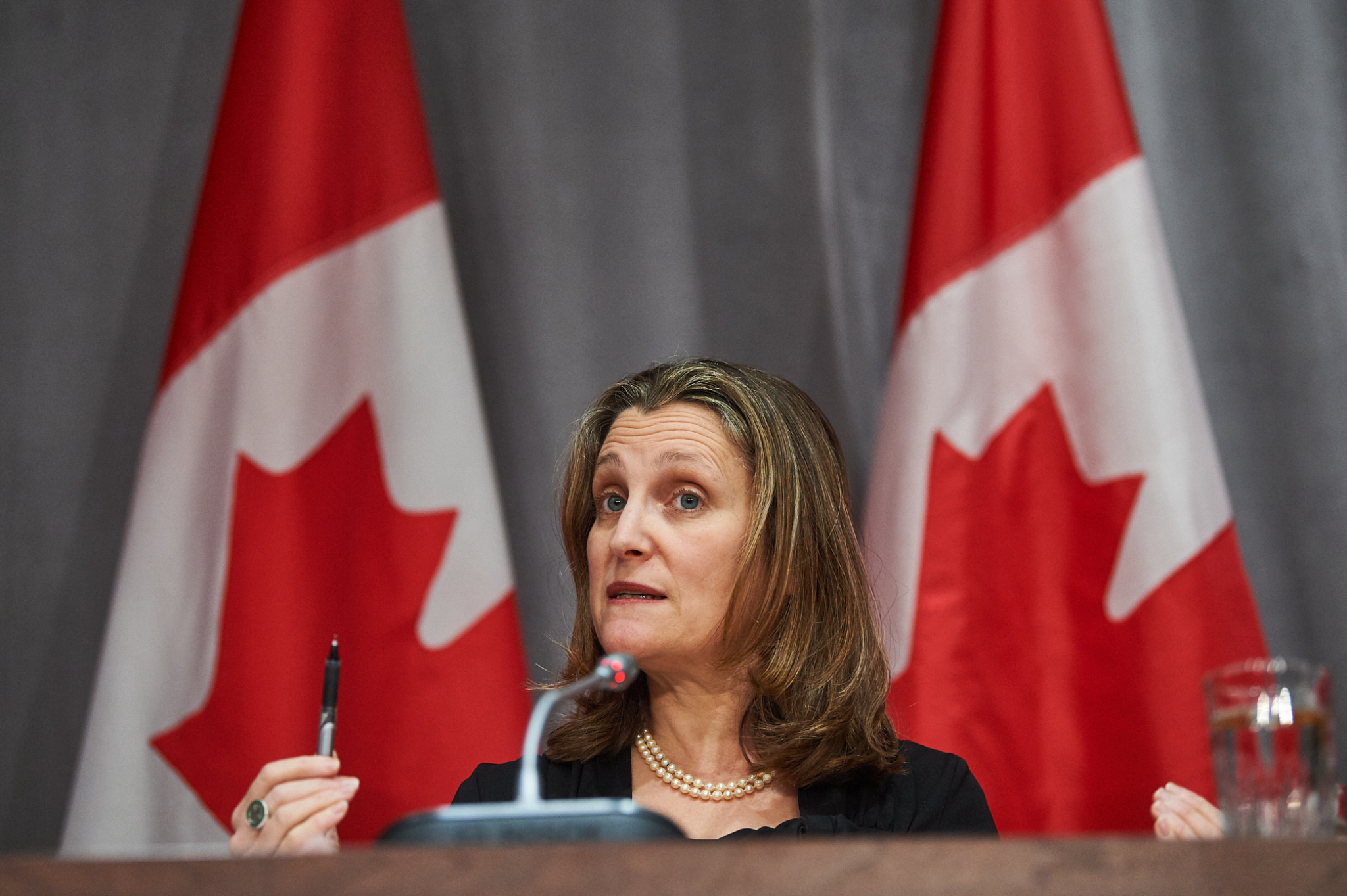 Chrystia Freeland is getting tough on inflation even as the economy teeters on the brink of a recession.

"We need to strike a balance today between, on the one hand, being fiscally responsible, keeping our powder dry, given the global economic uncertainty. On the other hand, being compassionate, providing support to those people who need it," she said.

Projections released Thursday show growth hovering around zero for most of next year and unemployment rising from 5.2 per cent to 6.3 per cent by the end of 2023. This constitutes a clear but shallow recession, which the federal government is combating through a modest $30.6 billion in new spending over the next six years.

One set of policies is targeted toward easing the cost-of-living crisis for the most vulnerable. Thursday’s mini-budget cuts federal interest payments on all federal student and apprenticeship loans and brings forward benefits for the country’s lowest-paid workers. This new spending was bundled with existing proposals to double the GST tax credit, increasing support for low-income renters by $500 and including dental coverage for children under 12.

Another set of policies is designed to unsnarl supply chains and promote a low-carbon industrial strategy for the post-pandemic economy. They include a $15-billion “Canada Growth Fund” as well as a two per cent tax on corporate share buybacks, incentivizing big business to reinvest its profits in Canada.

Lower deficits, but ‘what inflation giveth, it ultimately taketh away’

A strategy of fiscal restraint is an about-face for a Liberal government that usually runs big deficits in the face of weakening economic growth. Throughout the pandemic, government support increased wages and kept the jobless rate at record lows, allowing workers to turn down offers or demand better conditions or more flexible hours.

The flip side of a roaring pandemic recovery is that inflation is stubbornly high, clocking in at 6.9 per cent in September, and food prices are increasing by nearly double that amount. RBC estimates inflation will cost the average Canadian family $3,000 next year.

Counterintuitively, high inflation actually improves the state of Ottawa’s balance sheet. High oil prices and increases in tax receipts as a share of real output pad government revenue figures. The government is projecting a $36.4-billion deficit in 2022-23, almost a third less than the $52.8-billion deficit projection from the spring. But a return to larger deficits is all but guaranteed in the medium term.

Chrystia Freeland is getting tough on inflation even as the economy teeters on the brink of a recession, writes reporter and researcher Edward Ngai. #cdnpoli

“High inflation, a tight labour market and a better starting point are expected to boost revenues and reduce the deficit significantly,” explained Desjardins senior director Randall Bartlett. “While inflation is providing a tailwind to revenues now, what inflation giveth, it ultimately taketh away,” he said, citing rising public-sector wages and inflation-indexed spending on health care, seniors and child benefits. If the economy enters recession in early 2023 as predicted, welfare spending will also increase as people make less and the unemployment rolls expand.

“The government simply cannot compensate every single Canadian for every single additional cost imposed by elevated global inflation,” Freeland said during a cross-country tour preceding Thursday’s statement. In a letter leaked to the media, Freeland warned cabinet colleagues that 25 per cent of new spending will have to be offset by budget cuts.

The Conservatives propose cutting the federal carbon tax, which essentially raises taxes on the poor because the average family receives more in carbon rebates than they pay in taxes.

While the right criticizes the government for being fiscally irresponsible, the left is criticizing it for being uncompassionate. NDP Leader Jagmeet Singh argues government should accept mid-single-digit inflation over the medium term while spending big to enact price controls on essential goods.

But as Max Fawcett argued last week, while tax cuts and price controls may be politically popular, they also increase the money supply and risk embedding inflation permanently into the economy. “Any significant attempt right now to help Canadians contend with rising costs … would be like trying to put out a fire with gasoline,” he wrote. “The best course of action, at least from a policy perspective, is to simply let [inflation] die out.”

Interest rates and government spending are blunt tools to influence the economy. Freeland’s fiscal update represents a more subtle approach: raising confidence in the government’s fiscal discipline such that the central bank feels it can moderate interest rates on one hand, and on the other, increasing recessionary expectations so that Canadians cut back spending without being forced to by job loss or economic crisis.

The early results are encouraging. On Oct. 26, the Bank of Canada increased interest rates 0.5 points, undershooting consensus expectations of an 0.75 per cent increase. The smaller-than-expected rate hike was made possible by Freeland’s cross-country tour promising reduced spending.

Confident that monetary and fiscal policy will not be working at cross-purposes, Bank of Canada governor Tiff Macklem went so far as to suggest that the jumbo rate hikes like the ones that plunged the economy into recession may end sooner than expected. "This tightening phase will draw to a close,” he said. "We are getting closer, but we are not there yet… It could mean that we can move to more normal-size 25-basis-point increases.”

The markets have also responded positively to Thursday’s mini-budget. After falling throughout the day, the Canadian dollar gained almost half a cent on the U.S. dollar in the hours after Freeland made her statement in the House of Commons.

With her hands tied in terms of policy solutions, Freeland is fighting inflation by playing an expectations game: inflation is not fundamentally about supply shocks or government spending or the war in Ukraine, but the aggregated thinking and decision-making of individuals. If people expect a recession, they might cut back expenses and save for a rainy day, driving down price increases. If they expect continued inflation, they might charge more or demand higher pay, further pushing up inflation in a vicious wage-price spiral.

Freeland, a former financial journalist, is keenly aware of how market and popular expectations can manifest themselves in the real economy. Projecting bad economic vibes may be the government’s last available tool to slow inflation. By preparing Canadians for a short, shallow recession, Freeland is hoping the economy might yet avoid a long, deep depression.

Ottawa is flush with cash, short on political courage as recession looms

Re: "increasing recessionary expectations so that Canadians cut back spending without being forced to by job loss or economic crisis."

Let's have some honesty.

According to a predicted range of outcomes derived from current fiscal and monetary policy settings, from 200,000 to 800,000 jobs will be lost affecting not only those let go but their families as well. This self-inflicted damage will have enormous social costs.

The Economist gathered data on eight representative countries who at least a year ago began a tightening cycle, and who have now hiked rates by about six percentage points. The result: Not only have their core inflation numbers continued to rise, but their economies have been weakening relative to the global average.

In the middle ages, flagellants beat themselves in order to atone for their sins, and as a society we are engaged in a similar process of self-punishment for presumed inflationary spending iniquities.

The difference, of course, is that at least the flagellants beat themselves, whereas Bank of Canada authorities are inflicting their wrath on families with mortgages, student debtors, small business borrowers, and the most vulnerable workers - those first fired and last hired.

The sociopathic nature of current economic approaches needs to be called out, and one would expect especially by Canada's National Observer.

Of course problems in other

Of course problems in other countries who've pursued the same "remedy" as our federal government/Bank of Canada is doing.
Because the inflation we're suffering from isn't caused by wages, or "overspending." So the measures to control those cannot control inflation.
More like it is that (a) the retail banks (hand-in-glove with the central bank and government) would dearly love to pad their bottom lines, (b) all three want to have rate drops available at the ready when they become necessary. Not for the people being punished by the current measures, but (again) for the benefit of that unholy trinity.