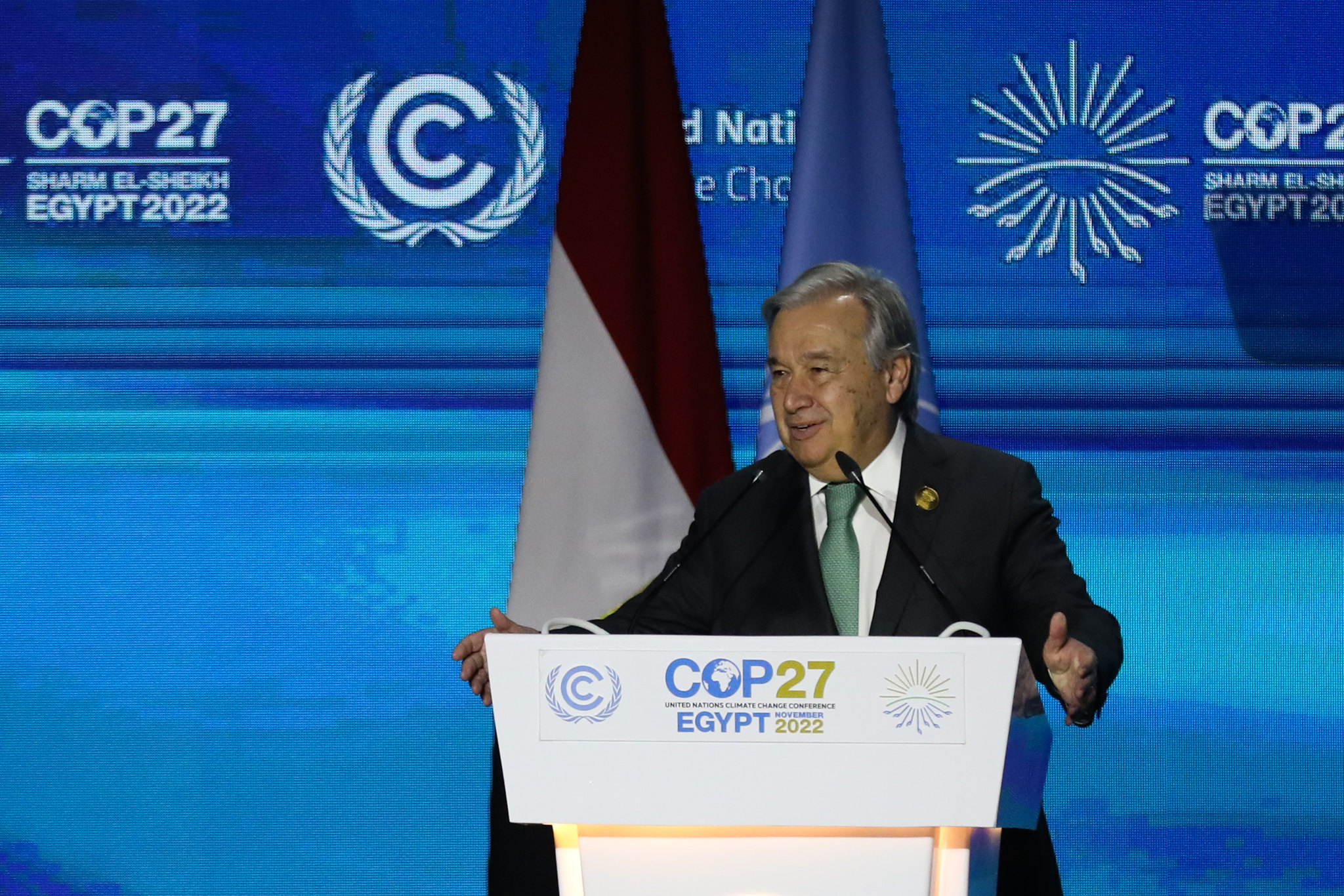 As the United Nations’ climate conference kicks off in Egypt, Secretary-General António Guterres is calling on rich countries to put climate finance at the heart of negotiations to rebuild trust with developing nations.

Guterres is specifically calling on countries to slap a windfall tax on fossil fuel companies and redirect that money to people suffering from climate disasters as well as high food and energy prices. To date, Ottawa has rejected a windfall tax despite the oilpatch having a record year for profits, raking in more than $20 billion in the first six months of 2022. He also stressed the importance of scaling up money from wealthy countries and the private sector alike to bring down planet-warming greenhouse gas emissions and adapt to climate change.

“At the same time, we must acknowledge a harsh truth: there is no adapting to a growing number of catastrophic events causing enormous suffering around the world,” he said. “The deadly impacts of climate change are here and now. Loss and damage can no longer be swept under the rug.”

In international climate finance, there are three main conversations taking place in the conference’s negotiating rooms. Money to bring down global greenhouse gas emissions — by swapping fossil fuel-powered electricity with renewable energy, for example — is called mitigation financing. Money to brace for damages from climate change that are already locked in, like building seawalls, is called adaptation financing. And money to compensate countries for the climate disasters that affect them, like the devastating flooding in Pakistan this year, called loss and damage.

To date, mitigation and adaptation finance has been easier to make progress on than loss and damage because rich countries do not want to be held liable for climate damage outside their borders. Previously, Environment and Climate Change Minister Steven Guilbeault told Canada’s National Observer he was open to discussing money for loss and damage if the question of liability could be put aside.

For the first time, discussing loss and damage is on the agenda at the conference, also known as COP27. That’s a big deal because at last year’s climate conference in Glasgow, a proposal put forward by China and the G77 — a coalition of 134 developing countries, representing the largest negotiating bloc at the conference — called for a loss and damage fund, which was spiked by the United States and the European Union.

However, the presence of loss and damage on this year’s agenda appears to be aimed at setting up a process to eventually have the funding in place, rather than discussing liability or compensation directly.

“Getting concrete results on loss and damage is a litmus test … to the success of COP27,” Guterres said.

“It is a fundamental question of international solidarity — and climate justice. Those who contributed least to the climate crisis are reaping the whirlwind sown by others.”

“We must acknowledge a harsh truth: there is no adapting to a growing number of catastrophic events causing enormous suffering around the world,” UN Secretary-General António Guterres says to delegates as #COP27 begins in Egypt.

Destination Zero executive director Catherine Abreu said it’s too early to say the mood is positive on the loss and damage issue, but by having it on the agenda, countries are at least showing a willingness to move forward. One problem, she says, is that the agreement to talk about loss and damages this year comes with the caveat that countries aren’t planning to have any actual plan in place to deliver money until 2024.

Agreeing to wait “another two years, and then have to figure out what that facility looks like, and how to fund it, is just too much of a wait,” she said.

The real concern is “around it being yet another talk shop,” she said. “There've been enough of those on loss and damage that have delivered nothing, so we know that's not going to work.”

At the leaders summit Monday, Barbados Prime Minister Mia Mottley urged countries to step up on loss and damages. She said the Global South was at the mercy of the Global North and asked how many more disasters must strike before climate change is taken seriously by rich, powerful countries.

“This world looks still too much like it did when it was part of an imperialistic empire,” she said. “The Global North borrows [at] interest rates of between one and four per cent; the Global South at 14 per cent, and then we wonder why the just energy partnerships are not working.

“We believe it is critical to address the issue of loss and damage,” she said. “But for loss and damage to work, we believe that it can’t only be an issue of asking state parties to do the right thing — although they must — but we believe the non-state actors and stakeholders, the oil and gas companies and those who facilitate them, need to be brought into a special congregation between now and COP28.

“How do companies make $200 billion in profits in the last three months and not expect to contribute at least 10 cents of every dollar of profit to a loss and damage fund?”

Canada’s National Observer will be tracking loss and damage negotiations over the coming weeks.

All about money...what about actually doing something about climate change?

Because several big oil companies have very deliberately and generously funded denialism for decades, and still are, just more deviously, going after them is the heart of the matter. That's despicable, the quintessential "crime against humanity."
Bottom line, it's almost always all about money.