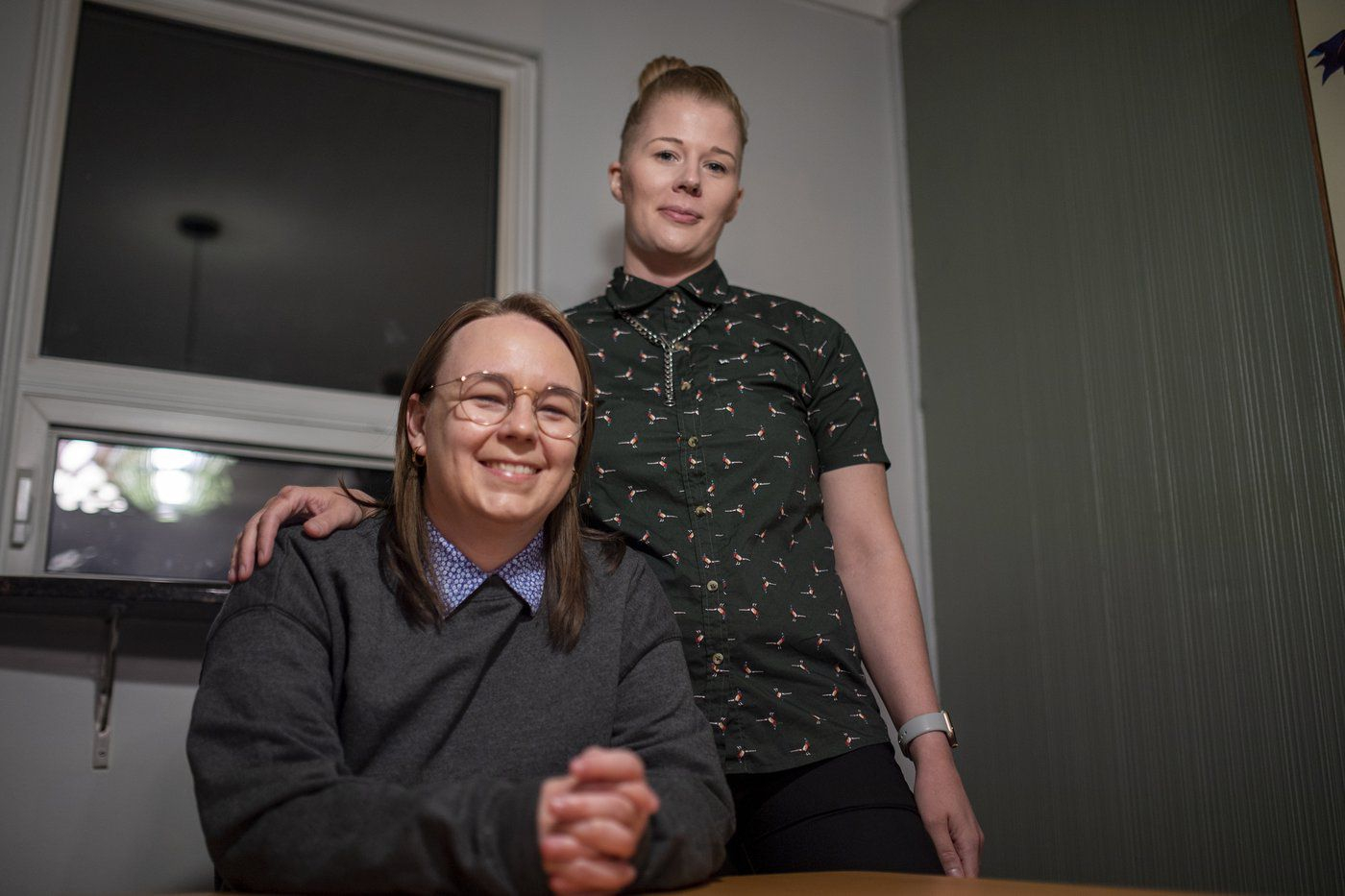 Kristen, right, and Jodi Hartung pose for a photograph at their home in Saskatoon on Oct. 6, 2022. Both women say they were discriminated against while at Briercrest College and Seminary. File photo by The Canadian Press/Liam Richards
Previous story

Jordan McGillicky says she was devoted to sports and her studies at a private Saskatchewan college but eventually felt driven away from the school because of her sexuality.

She enrolled two years ago at Briercrest College and Seminary, an evangelical Bible college in Caronport, an hour east of her hometown of Regina. The college grew in prominence in 2013 after former Saskatchewan premier Brad Wall, who has spoken at the school's chapel, gave it the right to grant university degrees, helping it attract students from across the country.

McGillicky didn't grow up in a religious home, but Briercrest was running sports programs during the COVID-19 pandemic.

"I was not expecting what happened to me next, because it's advertised as such an open place," she said, noting the school's student code of conduct asks students to show respect for homosexuals.

McGillicky was hired as a resident adviser at the school, but said she was fired earlier this year after peers dug up photos of her and her then-girlfriend on social media and outed McGillicky as bisexual.

McGillicky said she has no documents showing why she was fired and the school did not respond to a question about the reason she lost the job.

The Canadian Press interviewed eight former LGBTQ students from across Canada who attended the college over the last two decades. They said they experienced homophobia, abuse and discrimination that left them fearful and vulnerable.

They said they are speaking out because they're concerned for current students at the college and want changes or the school defunded. Briercrest receives funding from the province and was given $250,000 for this school year.

One student said she was struggling with her sexuality and feeling suicidal and that a counsellor told her to pray it away. Another said a professor wrote a derogatory word on a whiteboard in class to describe homosexuals. Others said speakers were brought in to teach them how to deny their sexuality, and they were encouraged to marry a person of their opposite sex.

Details of the allegations were put to Michael Pawelke, president of Briercrest. He declined to address them because of privacy reasons and because The Canadian Press did not provide in advance the names of the former students interviewed.

Pawelke also did not respond to a question about a 2019 school address in which he compared sex outside of heterosexual marriage to intercourse with animals, robots and corpses.

"It's a departure of the ideal. It's the truth we need to embrace," Pawelke said in a video of the address posted on the school's YouTube channel.

Pawelke said in an email to The Canadian Press that the school has clear statements on its stance on sexuality and does not promote sexual activities outside monogamous, heterosexual marriage.

The student conduct code also references a Bible verse saying those who practise homosexuality will never inherit the kingdom of God.

"By law, we have the freedom of religion. We are transparent about who we are and what we believe. Students attend voluntarily," Pawelke said in the email.

Like McGillicky, several students said they were outed after peers or faculty disclosed their sexual orientation to others without permission, resulting in bullying and alienation from their religion, family and friends.

Some students said they were invited to professors' homes for dinner, where the conversation topic was their sexuality. Others said they experienced or witnessed conversion therapy under the description of "counselling."

Ben Ross, who attended Briercrest between 2006 and 2010, said he was outed as gay at the town's post office, then assigned a paper at school.

"I had to write an essay on why I don't believe being gay is right, how I denounce all of it. And basically, if I didn't do that, I wouldn't (be able to) graduate," Ross said from his home in Nova Scotia. He said he threw out the essay years ago, but his account was corroborated by a friend.

Some of the former students, including Ross, said they are now getting therapy for religious trauma.

Lauren Jordan, who attended the school between 2013 and 2015, came out to one of her professors. She was told she couldn't graduate if she was gay and was encouraged to seek therapy, she said.

Jordan left the college instead.

"The fear still stays with me. The loss of relationships really stays with me. That trauma is not going to go away, but I certainly have come to terms with who I am and I am proud of who I am," Jordan said from her home in Barrie, Ont.

Documents and emails obtained by The Canadian Press show the Saskatchewan Party government was aware of alleged discrimination at the school after former student Jodi Hartung of Saskatoon raised concerns in 2015 with Pawelke and other officials.

In a letter to the government, Hartung said she was concerned and that some LGBTQ students were self-harming and had tried to commit suicide. She said she sent the letter after she was contacted "at an alarming rate" by students who felt unsafe on campus.

"I didn’t have an inkling that I was gay until I was 20 years old," Hartung said in an interview. "And at that point, I’m already halfway through my degree, heavily involved in the community and loved it there.

"You can’t just say, 'Hey, if you’re queer, don’t go there.' Because you’re undermining the experience of figuring out your sexuality and the journey that a lot of queer people are going on."

Her complaints landed on the desk of Premier Scott Moe, who was advanced education minister at the time. He asked an independent provincial college oversight board to investigate.

In 2019, several advanced education ministers after Moe, the government rejected those recommendations.

"It wasn't felt at the time we needed to do anything, given (post-secondary schools') requirement to comply with provincial legislation, particularly the human rights code," Minister of Advanced Education Gord Wyant said in an interview.

The government said it did adopt a recommendation that it write a letter to Briercrest and the complainant outlining the board's investigation.

Moe was not made available for an interview.

"We have been following our policies and keeping them current … we have and will continue to co-operate with our accreditors and external partners."

Hartung said she tried to get help years ago from the college, but no changes were made.

She is still hoping that can happen.

"You either have to hate yourself or know that everybody around you hates you," Hartung said. "Often it’s a combination of both. That’s obviously horrific to your formation as a human."

This report by The Canadian Press was first published Nov. 8, 2022.

SO agree. Churches are

SO agree. Churches are already publicly subsidized (don't pay taxes) so people "of faith" have those specific community places to gather, so why on earth is the public also expected to subsidize "special" schools for their children OUTSIDE of the public system (a.k.a. the cornerstone of democracy.)
Alberta, Saskatchewan and Ontario are the only provinces that still do that; even formerly uber-Catholic Quebec doesn't any more. Privatization of education is entrenched in the States with the majority of such schools being religion-based which makes us all wonder if there's a link between that and the baffling "big lie" threatening their democracy. After all, it could be argued that religion is the first and worst "big lie." And we all know the Republican model is followed by conservatives here, so this is a significant issue.....

A bible verse says that gay

A bible verse says that gay people will never "inherit the kingdom of God?" An idea as fully formed in their indoctrinated/deluded heads as Santa Claus WAS in most of ours, but that was when we were CHILDREN. Bottom line, we're talking about myth, an imaginative idea which by definition exists ONLY in one's head. So knock yourself out in your own head, in your own home, but stay the hell out of the public sphere i.e. schools and government. "Don't pray in my school and I won't think in your church."
In the article one of the people in charge of the school/church trumpets their right to religious freedom which enables them in turn to "out" and then punish their hapless students. Clearly this charter right needs to be re-examined and curtailed when it can trample other more basic and reasonable human rights. After all, we are all human but we are not all religious.
I think it's way past time that people who actually believe such nonsense are the ones we need to start "outing" in the way we always have done with people in "cults."

1 Corinthians 6:9-10 and 1 Timothy 1:10
Paul writes in Corinthians: "Or do you not know that wrongdoers will not inherit the kingdom of God? Do not be deceived: Neither the sexually immoral nor idolaters nor adulterers nor men who have sex with men nor thieves nor the greedy nor drunkards nor slanderers nor swindlers will inherit the kingdom of God." Pretty well sums up most of us, so heaven will be very quiet place, especially on a Saturday night says Leonard.