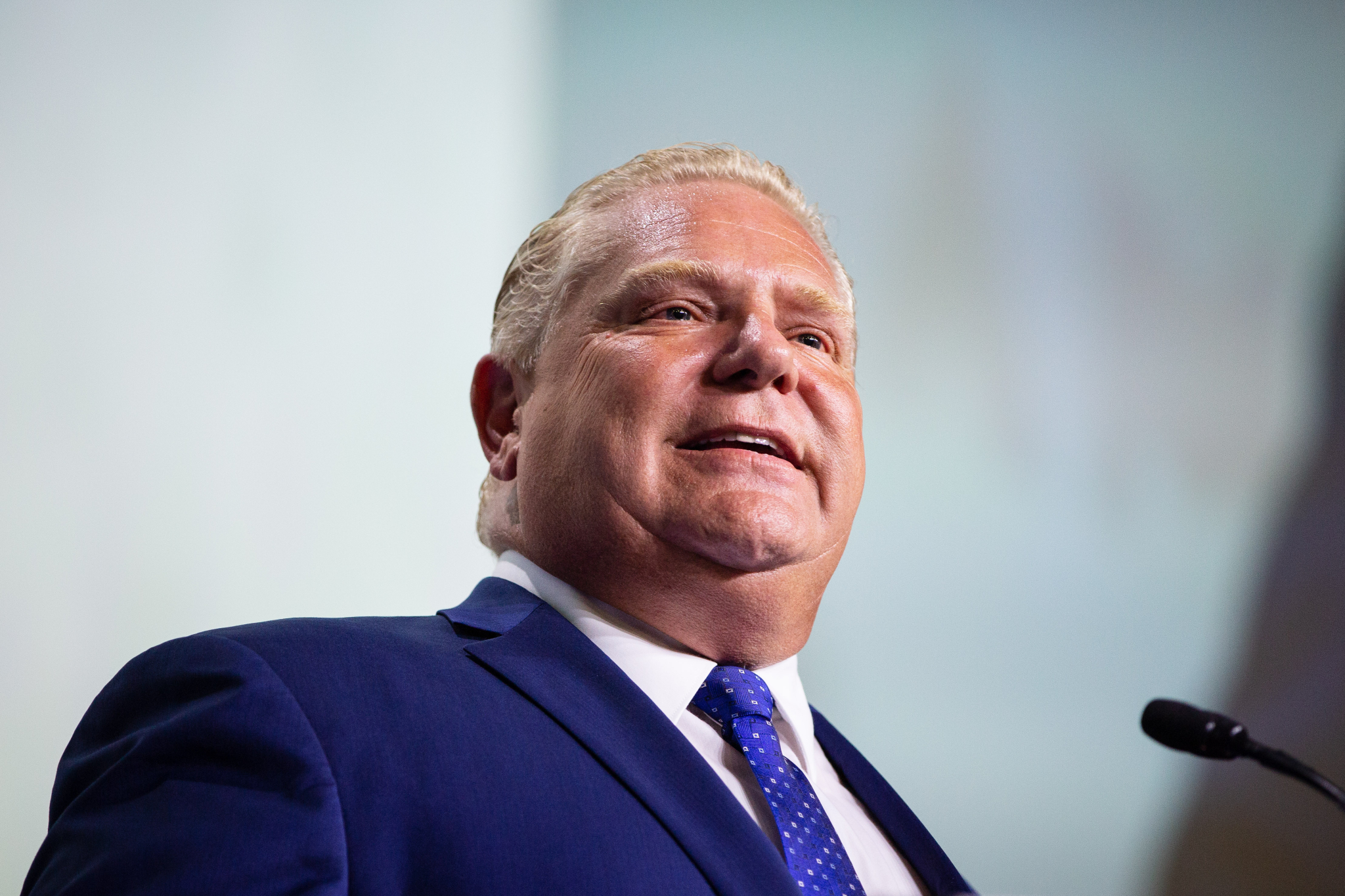 If Doug Ford and François Legault have their way, Canada may not have a Charter worth defending for much longer, writes columnist Max Fawcett. Photo by Alex Tétreault
Previous story

When Pierre Trudeau finally secured the support he needed to repatriate the Constitution and create a Charter of Rights and Freedoms in 1982, it came with a catch: the inclusion of Section 33, or the notwithstanding clause. That provision, which was the brainchild of Alberta Premier Peter Lougheed, sought to protect the power of provincial legislatures and check the influence of federal courts. Trudeau was a vocal opponent of the idea and resisted its inclusion, but as then-Justice Minister and future Prime Minister Jean Chrétien wrote in his 2008 memoir, “Canada probably wouldn’t have had any Charter without it.”

But if Doug Ford and François Legault have their way, Canada may not have a Charter worth defending for much longer. There was a longstanding assumption that any use of the notwithstanding clause would come at a prohibitively high political cost, one that would prevent it from being used. For the better part of the Charter’s four decades of existence, that assumption held true. After the Quebec government attached it to all of its legislation between 1982 and 1985, the notwithstanding clause went largely dormant in Canada.

Then Legault and Ford arrived on the scene. In 2019, Legault’s newly elected Coalition Avenir Québec government applied the notwithstanding clause in Bill 21, a piece of legislation that prevented public workers in positions of authority from wearing religious symbols. Much outrage ensued, but most of it was of the performative variety. When it came to any actual response from Ottawa, Justin Trudeau’s Liberal government pulled its punches as much as it could. The reason was obvious: a minority government with substantial representation in Quebec couldn’t afford to alienate the province’s popular new premier.

That sort of political calculus also informed the federal government’s half-hearted response to Ontario’s first-ever use of the notwithstanding clause in 2021, when Ford’s government used it to restore parts of his Election Finances Act that had been declared unconstitutional — including a rule that restricted third-party advertisers to $600,000 in the 12 months before an election was called.

Legault and Ford weren’t done. First, Quebec’s premier included it in Bill 96, a new language law that restricts the use of English in the public service and allows inspectors to conduct searches and seizures in businesses without warrants. That sort of pre-emptive constitutional strike was new, and it set a precedent that clearly alarmed officials in Ottawa. As Justice Minister David Lametti said, the notwithstanding clause “was meant to be the last word in what is, in effect, a dialogue between the courts and legislatures. It wasn’t meant to be the first word.”

Be that as it may, Legault’s gambit showed that the supposed political price attached to the use of the notwithstanding clause was no longer being charged, if indeed it ever was. His party was returned to government in October’s provincial election with an even bigger majority than it won in 2018.

That set the stage for this week’s stunning decision by Ford to use the notwithstanding clause to force a contract onto 55,000 education workers in Ontario. They include librarians, custodians and early childhood educators, and they will no longer have the ability to challenge the province’s back-to-work legislation in the courts for a period of five years. The so-called “Keeping Students in Class Act” sticks those earning less than $43,000 with a meagre 2.5 per cent wage increase that drops to 1.5 per cent for those earning more. And if any of them are tempted to strike anyways, they’ll be hit with a $4,000 daily fine.

This is the dictionary definition of heavy-handed thuggery, but it comes at the hand of a government that just recently won a fresh mandate from the voters. Having paid no price for his first usage of the notwithstanding clause, Ford seems to be testing just how far he can go before Ontarians are willing to clap back. Other conservative premiers across the country are surely watching the fallout and wondering whether they, too, could use it to circumvent any future labour dispute they might have with their teachers, nurses or other public-sector officials.

Now, it’s up to the federal government to do something about this. Justin Trudeau’s reticence is understandable, given the potential cost to his Liberal Party in the two biggest provinces in the country (and their two biggest bastions of support). But at some point, he has to stand up for the Charter, if not to protect his father’s political legacy then at least to preserve some of his own. He needs to rally the public behind the Charter and restore the political penalty that was supposed to be associated with overriding the rights it confers on Canadians.

He can start by working to remove the ability of the federal Parliament to invoke the notwithstanding clause itself, an idea Paul Martin floated during the 2006 election campaign. At the time, he described it as “a hammer that can only be used to pound away at the Charter and claw back any one of a number of individual rights,” and while he lost that election, his idea deserves another look. That hammer, after all, is being wielded with growing impunity. The federal government can’t stop premiers Legault and Ford from using it to bash the rights of people in their province, but it can raise awareness of the consequences — and potentially restore the political cost.

Opinion: If Doug Ford and François Legault have their way, Canada may not have a Charter worth defending for much longer, writes columnist @maxfawcett for @NatObserver.

The alternative is a country in which the Charter is barely worth the paper on which it’s printed. As Montreal lawyer and constitutional expert Julius Grey told the CBC earlier this year, “The rule of the majority can turn into the tyranny of the majority." Now, more than ever, we need a federal government that’s willing to stand up for the rights of the minority and the constitutional provisions that protect them. Yes, that could come at a political cost. But as we’re seeing, doing nothing may well come at a far higher one.

Trudeau can do more than

Trudeau can do more than revoke the federal use of the notwithstanding clause. According to Andrew Coyne's latest G&M column: "Can something be done? Absolutely. Minority and individual rights in this country did not begin with the Charter, or the courts. In the first decades after Confederation their protection was the explicit responsibility of the federal government: the original constitutional bargain. And the instrument through which it gave effect to this protection was the power of disallowance. ... That [it] has not been used in some time does not mean, as some allege, that it has become void. For such a convention to exist the federal government itself would have had to formally renounce it. No federal government has done that. No doubt its revival would cause a flap, and certainly it should be considered a last resort. But the alternative is simply to stand by while the Charter dissolves in front of our eyes. Surely the Prime Minister, of all people, will not wish to preside over the dismantling of his father’s proudest legacy."

There's lots more of this in

There's lots more of this in store for us if Ford is allowed to go to war on educational workers....who continued to go into work during parts of the pandemic when schools were open....and who make a paltry sum....even at the top of their pay scale. To offer a wage hike that is not even half of the going inflation rate...and to keep them from being able to collectively bargain for 5 years, is using the law as a cudgel. Undermining union rights is also a key element of right wing governments......leaning into a kind of fascism we need to call out.

We also need to remember: What happens to our educational system, from elementary to post secondary....happens to the entire society. Already, young people in Alberta who want to go into branches of medicine are being met with inflated grade point averages.......that have to be a consequence of government cut backs to post secondary insitutions.

We need teachers, nurses and doctors. I doubt stealing these professionals from the third world is going to prove adequate to our long term needs. In light of our long term needs..Ford's blather about 'caring for children' constitutes a 'baby sitter's dilemma".

The wages simply aren't worth it.

Agreed Mary; another salient point is that 70% of these educational workers are women and of course we're also talking about children here and education, which conservatives don't give a shit about. Clearly wasn't their strong suit, particularly anything in the arts or humanities.
The old saying that "there are two kinds of people in the world" has now fully manifested and it's a pitched battle, us against the "cons" of the world.
I loved watching and hearing those passionate CUPE people yesterday, they're us at our best.

So this is akin to what the

So this is akin to what the Republicans have done with the Supreme Court.
The right wing is too thuggish/stupid to do irony so this can be seen as them very much USING our progressive policies and language against us, sniggering all the while I might add as they throw our libtard nonsense back in our faces. However, the majority actually preferring our essential fair-mindedness; the dots need to be connected.
Here in Alberta the NDP are finally showing clear dominance now but only under real duress, I mean LOOK at Danielle Smith and just how appallingly incompetent and nasty the UCP has been for 4 years. So the media needs to help "up our game." We can all see how Nazi Germany came about now; mining people's pathological aversity to actual EVIL specifically and to conflict generally.
Someone has to call it, this conservative thuggery. Max is doing that admirably.

What did I say that CNO didn

What did I say that CNO didn’t want to print? That I prefer FPtP? That I found at least one point where pro-rep might help counter disruptive neo-right tactics like D’ohFo’s notwithstanding clause to shut down a strike? That I am a member of the NDP who happens to disagree with a single party policy?

Ahh…I see. The National “Observer” is very selective about what it wants its readers to observe. Apparently it isn’t a forum of open discussion. How disappointing: I used to respect this publication.

Like Kenbey, Moe, and Stefansen , Ford is a neoliberal. Neoliberalism and Authoritarianism go hard in hand