After Ontario’s labour resurgence, is it time for a general strike for climate? 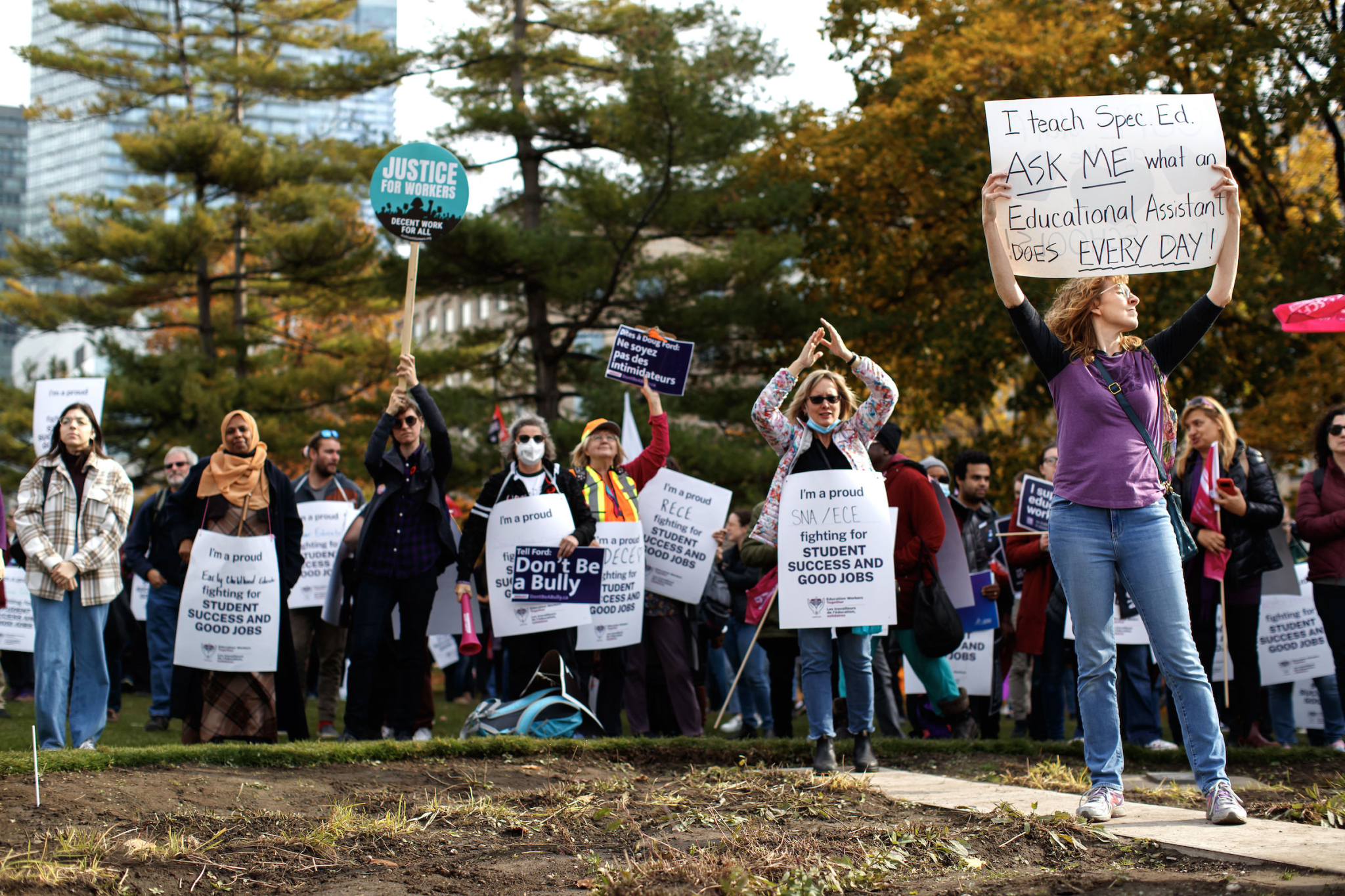 CUPE Ontario members and supporters wave signs and flags as they demonstrate outside the Queen's Park legislative building in Toronto on Friday, Nov. 4, 2022. THE CANADIAN PRESS/Cole Burston
Previous story

When the Canadian Union of Public Employees (CUPE) and its labour allies seemed to be moving toward a general strike, Premier Doug Ford jumped to beat the news.

He appeared publicly Nov. 7, an hour before a scheduled CUPE press conference, to say his government would repeal its controversial Bill 28. CUPE national president Mark Hancock, flanked by leaders from other public and private unions, declared a few hours later: “[Ontario education workers] took on the Ford government, and the government blinked.”

Ontario Public Sector Employees Union president JP Hornick later threatened, “The workers, united, will shut this province down whenever we need to.”

The apparent victory, secured by the threat of what would have been an illegal general strike, got Toronto-based political researcher and writer Chuka Ejeckam thinking: What else could a general strike accomplish? He sent a tweet, calling on organized labour “to utilize strike action and/or a general strike to help save the lives of billions of people in the Global South by [demanding] immediate climate action, loss and damage payments, and reparations.”

For Ejeckam, the scene Monday morning demonstrated an important precedent. “The most interesting thing about that expression of solidarity from labour groups and leaders was an explicit insistence and recognition that what’s right comes before what is legal,” says Ejeckam. “That’s not a position that we see articulated fiercely in sanctioned political discourse very often.”

Ejeckam isn’t the first to call for a general strike to force governments to take stronger climate action. France’s opposition leader Jean-Luc Melenchon encouraged one last month, and youth climate movements have for years fashioned their movements in the form of “strikes.” Climate organizers around the world have often suggested general strikes to pressure leaders into action.

So what could the tactic achieve for the climate movement, and could it happen in Canada? The short answer is: it’s complicated.

Some sectors of the labour and climate movements have gone hand-in-hand for years, says Brock University labour studies professor Simon Black. “Organized labour is present at the big climate marches, and there are callouts by local labour councils, provincial federations of labour and the Canadian Labour Congress for members to attend climate justice protests, demonstrations and actions,” says Black. “Labour will sponsor or co-sponsor those events, too, and it’s generally behind the idea of a just transition at the very top.”

Black says Bill 28 was seen as an “existential threat” to labour, which is why it united so many different sectors in opposition. “You have to ask, ‘What else poses such a threat?’ Well, climate is an existential threat to humanity,” he says.

But the road to an effective climate general strike is bumpier than the one behind Bill 28. Black notes a huge number of trade unions represent workers in oil and gas sectors, as well as carbon-intensive industries like steel and cement, which limits the potential for unity. “The labour movement is not politically homogeneous,” says Black. “It’s often very fractious, so it’s no mean feat to actually pull something like a general strike off.”

A general strike for climate action would likely be treated as a political strike, which could make it illegal and punishable. Hamilton-based labour lawyer Sarah Molyneaux says Canadian labour law, mostly forged during the Second World War, was established on a “bargain” that included unions giving up certain rights — including many of their rights to strike — in exchange for legal protections and recognition.

But illegal strikes aren’t unprecedented. They’re tradition. Molyneaux says prior to the postwar period, strikes, belonging to a union and even trying to organize your workplace were crimes in Canada. “They were crimes that people committed because they considered it worthwhile to do so,” says Molyneaux, adding that in the pre-war period, one in three workers went on strike in a given year.

“I think sometimes people forget the fact that unions are political,” she says. “They’re empowered to speak to their members’ interests, not just at the bargaining table but also in society. Social issues, environmental issues, those are workers’ issues.”

While she has a professional obligation that prohibits her from counselling any person to break the law, Molyneaux says, “there is certainly a history of pushing the bounds of what the law means, and questioning whether or not the limits on the rights of workers are constitutional.”

Laying the groundwork for a general strike

Emma Jackson, an organizer with 350 Canada and Climate Justice Edmonton, says too often people involved in climate movements and people involved in workers’ movements are treated as two isolated groups. The reality, she says, is more often than not, they’re one and the same and have shared interests.

“The same corporations that are violating workers’ rights, the same politicians that are trampling over the right to free and fair collective bargaining are the same individuals that are responsible for fuelling the climate crisis,” says Jackson. “There’s such a powerful intersection there.”

Jackson says the best tool we have at our disposal to tackle the climate crisis is the power to withhold labour, and to get serious about that tactic requires environmental movements to “get people to anchor the struggle for climate justice in their own workplaces.” She says that involves committing more resources to sector-by-sector industrial plans for transitioning workers to other jobs in climate-friendly fields. “That’s what is necessary to get climate on the bargaining table to the point where workers really see climate action as intimately bound up with their ability to put food on the table and pay the bills,” she says. Jackson points to the 2021 Canadian Union of Postal Workers’ campaign to fight for better conditions alongside greener operations.

To begin building strong relations with labour, she says Climate Justice Edmonton attends every picket line in the city to show their solidarity and stays up to date on collective agreement expiry dates so they can be ready to show support.

Jackson, like other labour activists and climate organizers, would love to see a general strike in support of climate action. The time to put in the work to make it a reality, she says, is now.

“It’s time to get very real and serious about what that’s going to take,” she says.

School’s back, as Ford backtracks on anti-strike law

A general strike for cliimate

A general strike for cliimate is a great idea....and I haven't even read the article!!!!!!!!

We're rapidly passing a point of no return, and too many of us think the Great Mother moves more slowly than do mainstream political parties. She doesn't. But the problem may be that too many of us city folk see wilderness as a playground....and the invisible source of our stock options.

Watch a couple of movies on the coral reefs....how alive they've been and how rapidly a warming ocean is turning them into dead zones....and you pretty quick realize its later than we think.
If a general strike for climate was called in Canada.....would anybody come??? And if we came, after it was over, what percentage would DO something to change the crazy lifestyle we've been living?

Jean-Luc Melenchon, according to France 24, received a little over 21% of the recent presidential vote; hardly a solid point of refernce. That was good for 3rd place, behind the far-right candidate, Marine Le Pen. The glass half-full responds, "well, yeah, but isn't that better than 10%? And Marine Le Pen didn't win, right?"

Some person sent a tweet for a climate general strike; that's news?

It's interesting -- which is different from being "useful" -- that this idea of a general strike in support of climate action was written about, because of the parallels in this labour relations scenario and the climate crisis in dealing with an acute threat versus a slow-burner (pardon the pun). e.g. a wild forest fire threatening to raze a town, and its only tavern(!) and a brazen provincial government that's found a new hammer (notwithstanding clause) and thus sees every obstruction to its whims as a nail. Just as with government climate policy, labour unions don't do well in strategic, long-term thinking and action, in my view.

In my experience, although they will seek situational solidarity with others, labour unions look out for their own, immediate needs. And they don't always do a great job of that. You will recall that Doug Ford received union endorsements in the last election. Oops! Now they are banging on the gates of power.

What the hell did they expect?
https://pressprogress.ca/five-more-unions-that-endorsed-doug-ford-are-no...

The broader, organized labour community doesn't have a great track record, in my view, of supporting long-term thinking about the state of any part of the ecosphere if it means a short-term detrimental impact on their membership or, even, the union bureaucracy itself. As long as the worker retains a job, who cares about the species of flora and/or fauna that are sacrificed for that job, even when the job depends on the species being decimated. For example, the continuing cutting of the small amount of remaining old-growth forests in BC; the continuing existence of open-pen fish farms off the coast, which ultimately support a small number of jobs at the cost of wild salmon runs and their dependent ecosystems (that is, pretty much the entire province).

If you are waiting for an enlightened labour movement to come to the aid of the ecosphere, I hope you have a comfy chair cuz I think you'll be waiting an awfully long time.

Having been quite active in

Having been quite active in the Mike Harris years, I can confirm Ken's point.
I was mainly involved around social justice, anti-poverty and education/spec.ed issues.
It soon became obvious that each little group turning out to publicize their own small bailiwick meant that demonstrations were generally small, and lacked numbers sufficient to get anything to happen.
That was even before the "grass roots" movements were co-opted by "advocates," who generally do a lot better job looking after their own job security and pay increases, than making anything happen for their alleged constituencies.
I proposed to a number of worker groups (mainly unionized) about supporting one anothers' initiatives, and was met with, "That won't make anything better for our members," completely discounting the force of numbers, and effectiveness of solidarity.

The big piece of Days of Action was that the Amalgamated Transit Union shut down. When there's no transit, people *can't* go to work.

Of course, "the news" vastly down-counted the numbers that turned out, claiming that the turnout on parliament hill around Quebec leaving confederation was larger. But a clever video editor showed clips of the two, side by side: not that most of the public likely caught on.

Unions will support unions. And they'll tell you that what's good for unions is good for everyone (which isn't true: it's not even good for everyone working at a given job to be brought under the union umbrella. There was a huge buzz around unionizing part-timers at one of the local grocery chains: it made it so they paid for benefits they couldn't access, lost seniority increases, and had smaller take-home pay.

The truth of the matter is that most union workers are public employees, one way or another, and the general populace pays their pay increases through taxes. The same is true, essentially, for many extraction industries, given the massive government subsidies.

A general strike worked then for non-unionized workers, because transit was completely shut down; in these days of working from home, though, all bets are off.