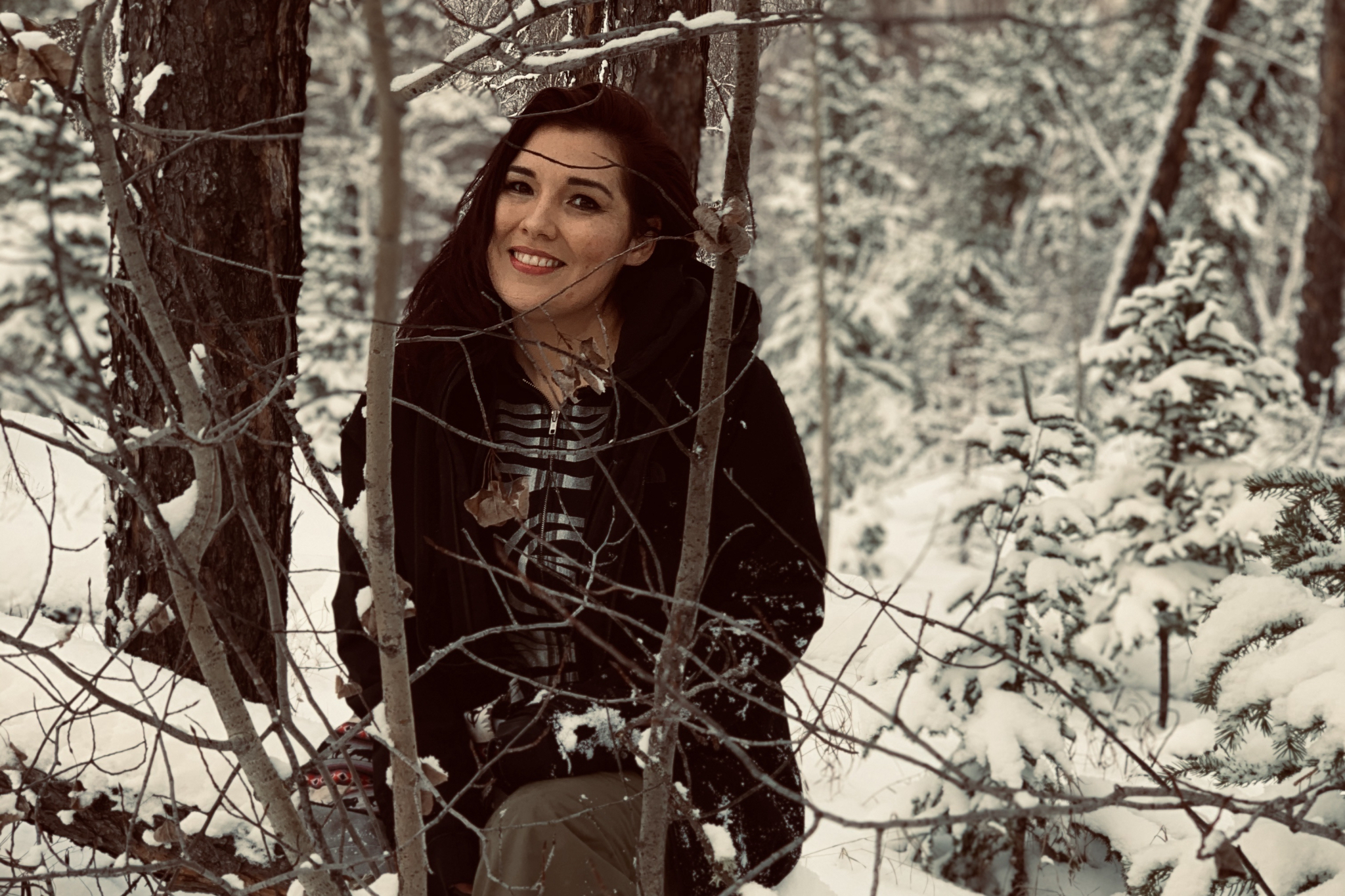 Melissa Daniels is from the northern Alberta hamlet of Fort Chipewyan, but left the community in part because of fears nearby tarsands development would threaten her health. Photo provided by Melissa Daniels
Previous story
Next story

Melissa Daniels is from Fort Chipewyan, an 850-person roadless hamlet set on the boreal shores of Lake Athabasca in northern Alberta. It's the land her people have lived on for time immemorial, and the place her relatives and friends call home.

Yet, despite her love for her home community, she doesn't live there. The settlement is directly downstream from the tarsands, which has contaminated the hamlet and nearby forests and lakes with chemicals. Snow can be toxic; so can the fish and game. The community has suffered an "epidemic" of rare cancers likely linked to the pollutants, said the former nurse, lawyer and toxics program manager for the Canadian Association of Physicians for the Environment.

Her fear that the contamination will harm her health is the "primary reason" she left for Fort Smith, a town roughly 150 kilometres north as the crow flies across roadless boreal forest. While she would prefer to live in her hometown, she felt the toxic threat was too great.

In 2009, the federal government promised to study environmental contamination in the region. It has yet to live up to the promise. Moreover, Canada's main environmental law to regulate toxic chemicals — the Canadian Environmental Protection Act (CEPA) — doesn't currently require federal agencies to look at the cumulative health impacts of exposure to harmful substances. It instead assesses the toxicity of each substance separately and uses that assessment to determine how much, if any, companies can release into the environment.

That could soon change. The federal government last year announced plans to revamp the law for the first time in over 20 years. The proposed changes include guaranteeing Canadians the right to a healthy environment. It would require the government to assess the cumulative impact of exposure to multiple toxins at once and give special consideration to vulnerable communities like Fort Chipewyan.

The parliamentary environment committee will be holding final hearings on the bill this week, one of the last hurdles it needs to pass before becoming law. However, environmental groups warn that as written, the law won't be strong enough to protect Canadians.

"On industrial chemicals, it (is) pretty much a wipeout," said environmental lawyer Joe Castrilli, who works with the Canadian Environmental Law Association (CELA). Only a fraction of the thousands of substances used in Canada, some of them potentially toxic, are regulated by CEPA and the revamped law won’t go far to change that.

Under the revamped law, the government will only be required to largely prohibit a small group of substances — about 20 for now — while the remaining roughly 130 will be allowed for use, provided they are subject to pollution prevention plans. While those plans could theoretically be used to severely restrict or ban the use of some substances, in practice, the government has largely used them for pollution "abatement" or mitigation, a less effective option, Castrilli said.

Earlier this year, CELA published an analysis of federal emissions data that showed the total amount of pollution from roughly 40 cancer-causing chemicals did not significantly decrease between 2006 and 2018. The data gathered in the National Pollutant Release Inventory showed chemicals like asbestos, arsenic and benzene were more often released into the environment through land-based pollution instead of aerial emissions.

Some of these increases can be attributed to new industrial activities, but the analysis warned that the data suggested polluters are simply replacing waste disposal techniques that relied on airborne emissions with newer approaches that release pollution into waterways and landfills.

Strengthening these rules is essential if the government wants to make good on its promise that the new bill will give Canadians the right to a healthy environment.

"What this means is that all the government has ended up doing over 15 years is basically shifting (pollution) from one environmental pathway — air — to another, land," Castrilli said.

He would like to see the new CEPA take stronger steps to prevent and mitigate chemical pollution in a timely manner.

"We have to look at this in the context of the bigger picture," said the late Dalhousie University environmental and marine law professor Meinhard Doelle in an April interview. "Emissions are still huge … and if the goal (of CEPA) is to reduce and eliminate the emissions of toxic substances into a fragile environment, it's an abysmal failure."

Global chemical production has soared 50-fold since the 1950s and if production isn't curbed, the world will be dealing with three times more chemicals in 2050 than we do now, according to CELA.

Still, other advocates are quick to note that while the proposed updates to CEPA need strengthening, they remain a big improvement. The new bill will prioritize which substances the government must assess and give "preference to prohibition" for chemicals that can cause cancers, genetic mutations, or impact reproductive health.

Those chemicals are "only a subset" of those regulated by the law, said Lisa Gue, senior policy adviser for the David Suzuki Foundation, but the normalization of prohibition could help Canada shift its rules to target entire groups of harmful chemicals. This approach is widely used in Europe and better protects people and the environment, she said.

The updates will also require the federal government to consider the cumulative impact of exposure to multiple chemicals at once, particularly for vulnerable populations like the residents of Fort Chipewyan.

Under the old CEPA, the government only assessed the environmental and health risk of individual harmful substances. However, people are often exposed to several chemicals at once, often for extended periods of time and in varying concentrations depending on where they live or work.

The updated law will require the government to consider "available information" on cumulative impacts, Environment and Climate Change Canada (ECCC) noted in a February statement.

Strengthening these rules is essential if the government wants to make good on its promise that the new bill will give Canadians the right to a healthy environment. While the right is written into the proposed law it remains unclear how the government will ensure it will be protected in practice.

That's because the proposed changes only enshrine the right. They do not specify how the government should go about protecting it, nor does it offer Canadians a clear path to sue the government if it allows harmful pollution. Without these two aspects, Gue and Castrilli said that the new right won't mean much on the ground.

Back in Fort Smith, Daniels is hoping that the new CEPA will be strong enough to protect her friends and relatives in Fort Chipewyan.

"They're very aware of the (health) concerns," she said. "But what are we going to do?"

Editor's note: This story was amended on Nov 24, 2022, to note that Melissa Daniels is the toxics program manager for the Canadian Association of Physicians for the Environment.

And 6 of these fossil

And 6 of these fossil polluters are on the list of ESG companies.
Exxon is in the first 10.
It shows that all you need, to be on that list, is a nice prospectus on glossy paper telling all sorts of lies.
Is ESG a scam of what?

What has happened to the

What has happened to the people of Fort Chipewyan is such a travesty. Reconciliation? Rather, Fort Chip has become a sacrifice zone for the tar sands development and the pollution that goes with it. And the Alberta government and federal government have basically turned a blind eye to the problem. It's hard to believe.

As far back as 2006, Dr. John O'Connor tried to expose the problem of high cancer rates in the community, but he was vilified and attacked for this. Later, he received a whistleblower award:
https://www.cbc.ca/news/canada/edmonton/alberta-whistleblower-fort-chipe...

However, the problem still exists. I hope the new federal CEPA legislation will help.

Still no independent comprehensive health study on rare cancers in Fort Chipewyan.
What is the oilsands industry afraid of?

Now the industry wants to empty its tailings ponds into the Athabasca River.
Which flows into Lake Athabasca, the site of Fort Chipewyan. The lake is drained by the Slave River. Fort Smith is on the Slave River.
Melissa Daniels isn't safe even in Fort Smith.

No baseline studies. You would think industry and govt did not want to know the impacts of oilsands "development". And, more importantly, they did not want the public to know.
Ethical oil?

"Doctor who sounded alarms about cancer in the oilsands wins whistleblower award" (National Observer, March 3rd 2021)
"… [O'Connor] still works as a doctor in northern Alberta and continues to push for governments to act on the problem. To this day, a comprehensive health study to definitively prove that the oilsands is causing higher levels of cancer has not been done.
"As O'Connor suffered the effects of the backlash, the community's resolve got even stronger, Adam said.
"'It just made the fight more worthy to fight,' he said. 'This time we were not fighting for our community, we were fighting for our doctor, the doctor who raised the alarm.'
"But Adam also said the problem remains — even amid COVID-19, more of his community are dying from cancer than the virus, he said.
"'Nobody's doing nothing about it... it seems like government and industry work hand in hand,' he said."

Dr John O'Connor: "Pre-election, the NDP/Rachel Notley were vocally supportive of bringing accountability and responsibility to bear on the environmental and health impacts,especially downstream, of the tarsands. After the AB Cancer Board report on Fort Chipewyan, she was notably outspoken on the need to comply with the recommendation for a comprehensive health study of Fort Chip, which was never even started.
"Now—it's buried and forgotten. Such hypocrisy."

Going by the record of

Going by the record of environmental non-protection of all stripes of government, it is highly unlikely that any new regulations would be brought in that would impose significant costs on the polluters. So, we can look forward to more tokenism in environmental protection.

Even if (just imagine) that regulations were put in place to stop all toxic dumping, it would not now be much help to the people living in Fort Chipewan. Their environs are irreversibly contaminated with life-altering and life-foreshortening toxins that there is no practical way of cleaning up. In effect, their lands and settlement have been made so unhealthy as to be permanently unlivable for the foreseeable future. There would seem to be little alternative to evacuation, at the very least for all children and women of childbearing age.