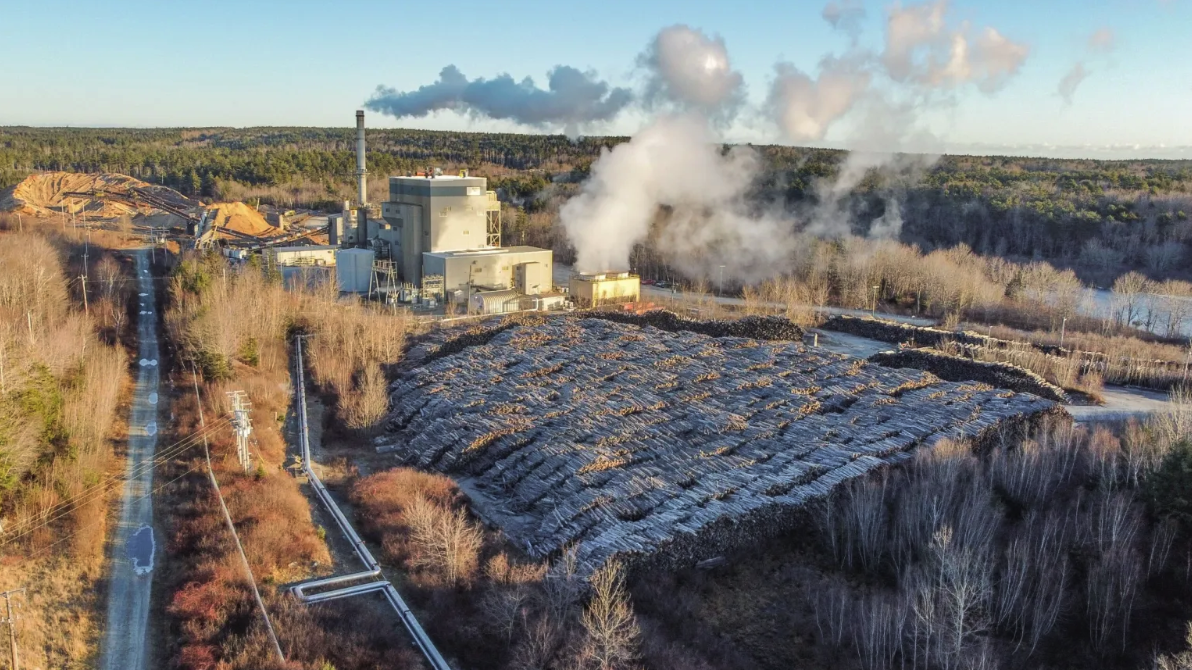 The Brooklyn Energy biomass plant in Nova Scotia before it went offline due to wind damage. Photo by Simon Ryder-Burbidge
Previous story

One of Canada’s most carbon-polluting electrical utilities is set to burn more waste wood from forests in an attempt to reach its renewable energy targets.

As of 2019, 51 per cent of Nova Scotia’s electricity generation was coal, 22 per cent was natural gas and three per cent came from biomass and geothermal energy. The utility failed to meet a 2020 goal of achieving 40 per cent renewable energy, blaming the delayed Muskrat Falls hydro project in Labrador for failing to provide power it was counting on. The target was pushed to 2022. NSP has confirmed it will miss the goal again and said shareholders shouldn’t have to pay the $10-million penalty.

While Alberta is the highest-emitting province by a long shot, Nova Scotia relies the most on coal for electricity.

As the 2030 federal deadline to shut down coal-fired electricity plants draws closer, all provinces must determine how to replace fossil fuels used in electricity generation. The last coal-fired plant in Alberta is set to close next year when it will be transitioned to natural gas — still a planet-warming fossil fuel, which the International Energy Agency says will have to be scaled back sharply after 2025.

The province says biomass is “low-quality residual wood and chips leftover from sustainable timber harvesting and primary processing,” and does not include harvesting whole trees for fuel. NSP is required to buy 135,000 megawatt hours — the equivalent of about 16 wind turbines running for a year — of readily available renewable energy in 2023, 2024 and 2025. The province says biomass is “likely to be the only readily available option during that time. It is available due to the closure of the Northern Pulp mill and damage from hurricane Fiona.”

NSP owns one biomass plant, Port Hawkesbury, and its parent company, Emera, owns another in Brooklyn, N.S., that has been offline since February due to wind damage.

N.S. has mandated its privately owned electrical utility, Nova Scotia Power, put more biomass energy on the grid, saying the product is "renewable" and "readily available." However, critics say the opposite: that it's more polluting than coal.

Tynette Deveaux of the Sierra Club’s Beyond Coal Campaign called the announcement “absurd,” adding it shows the “province is playing politics rather than trying to reduce greenhouse gas emissions.” Instead, sustainable wind and solar energy should be the plan for decarbonizing the grid, she said.

By 2030, the province aims to produce five gigawatts of offshore wind energy specifically for green hydrogen production, the province announced in September, while confirming most of it will be exported to other countries.

“I'm concerned that the government's recent move here with the announcement about biomass is a kind of distraction or diversion away from holding Nova Scotia Power accountable for renewable energy requirements,” she said.

In NSP’s 10-Year Systems Outlook, the utility details plans to bring natural gas — a fossil fuel — to the power grid. Deveaux said that would cancel out any gains made by the province’s February callout for solar and wind projects to supply 10 per cent of the province’s electricity, part of its ultimate goal to be 80 per cent renewable by 2030.

The biomass news follows mounting tensions between the provincial government and NSP, and further stresses what environmentalists have long warned: Nova Scotia is not on its way to reaching its emissions targets.

Last week, CBC News reported NSP sent a letter to the province calling for a meeting to “work through the differences” and “stop this fighting.” The two have been butting heads over the passed Bill 212, which caps electricity rate increases to customers at 1.8 per cent for everything other than fuel for 2022, 2023 and 2024. It also mandated revenue from the increase "may only be used to improve the reliability of service to ratepayers." NSP has experienced credit downgrades since and said the state of its relationship with the province makes the utility “not confident” it will be able to get off coal by 2030.

Now, both are waiting for a decision from the Nova Scotia Utility and Review Board on NSP’s request for a 14 per cent rate increase for electricity over two years.

The province insists a rate hike of that magnitude would be unfair to customers, while NSP is failing to provide reliable service. Hurricane Fiona left around 78 per cent of clients without power — over 20,000 were still without power 10 days after the storm — and the utility is warning of outages from a storm over the upcoming holiday weekend. Deveaux said it shows NSP hasn’t been investing in making the grid reliable. She points to Summerside, P.E.I., which has a municipal utility partly powered by wind and solar; after Fiona, the city had most of its residents back online within two days.

Following the wrap-up of this week’s United Nations biodiversity conference in Montreal, which saw the passing of a landmark deal to protect nature, Raymond Plourde of the Ecology Action Centre calls the biomass announcement a blow to biodiversity.

“Biomass is not a climate solution, but it’s being embraced by our government in policy and practice because it’s easy to burn trees instead of coal, and it helps the forestry sector with a glut of so-called ‘waste wood,’” he said in a statement.

“Its significant negative impacts on the climate and biodiversity are conveniently ignored. It’s a farce, a sick joke at a time when we need real climate solutions.”

Want to jump the queue for a mid-size electric vehicle? Get ready to pay big time

Wood smoke is a toxic stew of

Wood smoke is a toxic stew of chemicals and PM2.5
Wood smoke is pollution (nothing natural about it)
So this is all a terrible idea.
What don't they get about that?

Good article. It is important

Good article. It is important to draw attention to burning "waste wood." Much of forest regeneration depends on intact trees and even brush and stumps and logs staying in place. Suzanne Simard's book, "Finding the Mother Tree" should be required reading for all NS politicians.

The public reaction is

The public reaction is particularly odd to the recent announcement about nuclear fusion because we already have a fusion reactor, one so proximate and powerful a good look at it would burn out your eyes. It’s been showering us with energy for a very long time. We can harness the rays it delivers and the winds they generate, cheaply and at scale. And yet power from that original sun is often a subject of derision not salvation. The sun delivers enough energy in one day to power everything on earth for a year. Perhaps the problem is that business can’t patent, package and market it similar to what the fossil fuel industry can do presently.

Renewables are now the cheapest source of energy. The price for solar has dropped 80% to 89% since 2010 although installation costs are expected to increase somewhat. Why aren’t Nova Scotian roof-tops, arenas parking lots, schools etc. being covered with panels. Biomass is 4 times more polluting than coal as are the wood pellets we ship to Europe with a stamp saying that they come from under-utilized Nova Scotia forests. Do we have to be stupid to the last drop of oil, lump of coal or piece of firewood? We can do better than to keep burning stuff.

Battery technology is advancing quickly; unlike gas as a backup, the energy is available instantaneously. Solid state batteries are being developed that have high density and will be game changers. This is going to be a team sport to get things working properly. That would still be preferable to putting things off a couple of decades until we get extremely expensive small nuclear reactors up and running. Why this lack of urgency and slow pace in the actions taken by our governments in the face of an existential crisis? Those who win the energy wars win.

NOVA SCOTIA may be dirty but

NOVA SCOTIA may be dirty but it's CO2 emissions don't compare to Alberta or Saskatchewan, which generate almost 100% of its electricity from fossil fuels.

This is patently not true, so

This is patently not true, so why promulgate such nonsense? Alberta has 5 new wind projects under construction thanks to NDP initiatives on power generation contracts. Cheap electricity too.

NOVA SCOTIA may be dirty but

NOVA SCOTIA may be dirty but it's CO2 emissions don't compare to Alberta or Saskatchewan, which generate almost 100% of its electricity from fossil fuels.

The best rule of thumb for

The best rule of thumb for climate action is to stop burning things. Australia also has a long way to go but they've figured out that burning biomass is not a solution: https://news.mongabay.com/2022/12/australia-rejects-forest-biomass-in-fi...