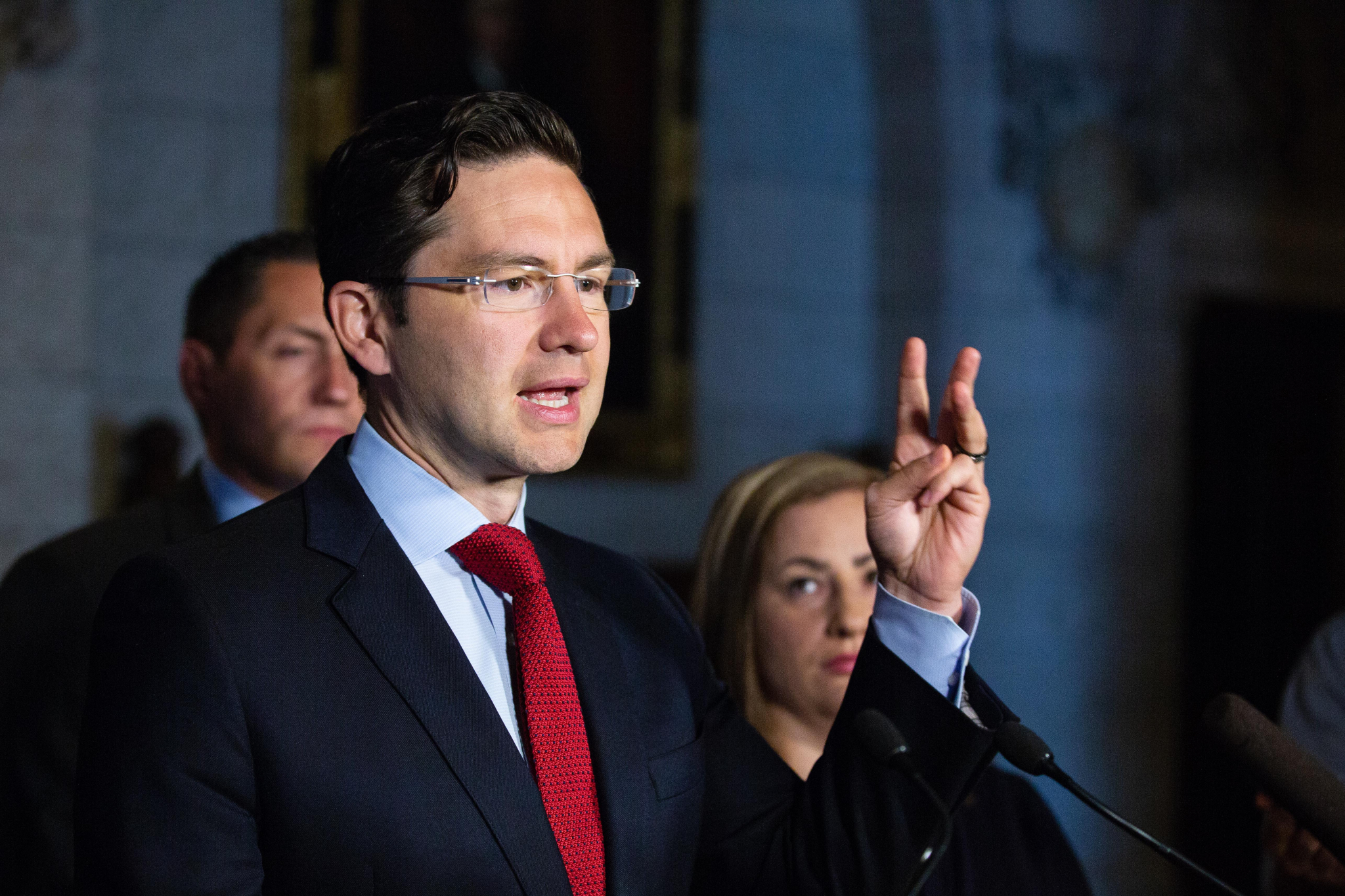 Pierre Poilievre has been starting political fires all across the country over the last year, columnist Max Fawcett writes. Photo by Alex Tétreault
Previous story
Next story

For a party that won control of the House of Representatives in November’s midterm elections, the Republicans are doing an awful lot of losing these days. For the first time in more than a century, they’ve been unable to elect a Speaker of the House as the Trumpist wing of their party continues to torpedo Kevin McCarthy’s nomination (13 times, at last count).

Canada’s Conservative Party hasn’t gone nearly as far off the deep end, but there are lessons here for it about the dangers of trying to harness anger to their political aspirations — ones that its most recent former leader seems determined to draw out.

In a year-end blog post, Erin O’Toole criticized the party’s embrace of the far-right elements that new leader Pierre Poilievre has repeatedly cozied up to. Notably, he called out the “F*ck Trudeau” flags that have become a common sight whenever convoy-curious conservatives gather in groups.

“These flags and the hyper-aggressive rhetoric that often accompanies them are slowly normalizing rage and damaging our democracy,” O’Toole wrote. “Since so many people that display the flags claim to be conservative, this might also be an appropriate time to tell them that these flags are the very antithesis of what it means to be conservative.”

O’Toole’s post forced Poilievre to come out and finally acknowledge that yes, he too finds the flags distasteful. But he couldn’t help but add that the real issue is what made people fly them in the first place. “I don’t like the flags and I don’t like rage, but I think we have to ask ourselves, why are people so angry? And the answer is that they’re hurting.”

Poilievre says his goal is “turning hurt into hope.” But if his attempt to channel Barack Obama feels just a bit off, that’s because he’s personally responsible for much of the anger he claims to be worried about. After all, he’s the one who keeps telling Canadians their country feels “broken” — and that all of their woes are directly attributable to one source.

His promise to turn the hurt he’s cultivated into hope is a bit like an arsonist trying to put out the fire they started. Poilievre has been starting political fires all across the country over the last year, whether it’s stirring up anger in Vancouver over drug policy, frustration in Alberta about federal climate policies, or discontent among vaccine-skeptical protesters in Ottawa.

His willingness to blame the prime minister for almost anything was on display in a video he posted a few days ago when he shared the story of “Mustafa”, a Calgary man he apparently met in the Ottawa airport who was looking to get his passport renewed. According to Poilievre, “Mustafa” had applied 10 months ago, but still hadn’t received it — and his wedding in Cuba was supposed to happen the previous day. “They’re all down there in Cuba waiting for him to come down and get married, and he can’t get a passport. He applied 10 months earlier. This is how everything operates with Justin Trudeau.”

But as many people pointed out in the comments to his post, that isn’t actually how it operates. Much of the backlog in passport applications has been eliminated, and hundreds of people pointed out that they’d had their own applications processed in a matter of days or weeks. Meanwhile, if Mustafa was really in such dire straits, he could have simply gone to the Calgary passport office and requested the urgent or express delivery option rather than boarding a flight to Ottawa. For the leader of a party that claims to believe in personal responsibility, this is some pretty thin gruel.

Canadians seem to be taking notice. The most recent Angus Reid Institute poll showed more than half of Canadians (54 per cent) have a negative view of Poilievre, while only one-in-three like what he’s offering. “These levels of unfavourable sentiment are much higher than those of previous leaders Andrew Scheer, Erin O’Toole, and Stephen Harper at the beginning of their own leadership ventures.”

Pierre Poilievre says he wants to turn "hurt into hope." So why does he keep dumping gasoline on the fire he's trying to put out? Columnist @maxfawcett writes for @NatObserver

If Poilievre wants to do more than just fire up his base, he might want to listen to O’Toole’s words of warning — and pay attention to what’s happening south of the border. Anger and frustration are potent political forces, especially in the context of an internal leadership contest. But they impose limitations on leaders who try to weaponize them for their own purposes.

And as the ongoing collapse of the Trumpist movement shows, a political firestarter can sometimes end up burning their own house to the ground.

Is it possible Poilievre, the

Is it possible Poilievre, the most popular MP in Canadian history, isn't completely sincere?

(I realize it's a wild idea but it can be useful to have multiple working hypotheses, no matter how unlikely.)

I would like to see some proof of your assertion that Pierre is the "most popular" mp in Canadian history. He sure does not seem to be very popular as leader of the alleged Conservative party.

The "most popular mp" ? The

The "most popular mp" ? The little PP is a drip with a nasty attitude. Devoid of policy proposal and nothing but whining and complaining in public? He is nothing short of disgusting. O'Toole is at least conscious of just how Pathetic Poilievre comes across...

Veering between authoritarian and libertarian, Pierre Poilievre’s policies are a dangerous way to run an economy
The new conservative leader has shown a knack for fomenting anger but not for proposing sensible economic solutions, writes Jim Stanford.
Jim Stanford, Sept. 17, 2022
https://www.thestar.com/business/2022/09/17/pierre-poilievres-hodgepodge...

Jim Stanford: "Poilievre curiously denounced Ottawa's newly announced aid to low-income renters, sniffing that this$500 isn't much compared to big-city rents. For someone who has received a six-figure taxpayer-funded salary since he was 24, and is about to move into a rent-free public mansion, $500 might not seem like much. For most Canadians, it's meaningful. This hodgepodge of policies is neither right-wing nor left-wing. Poilievre promises to ban so many things; imports of Middle East oil, attendance at world economic conferences, university policies, and more ; he sounds authoritarian as often as libertarian. The only consistent thread in his economic platform is a desire to foment anger over any convenient issue, and direct it at federal institutions.That's an effective way to get yourself elected Conservative leader. But it's a very dangerous way to run an economy."

It would be laughable if it

It would be laughable if it weren't so dangerous that PP has turned Trudeau into a Where's Waldo? Apparently Trudeau works at the passport office, and at the airports, and in public health, and and and. He's everywhere!

Haha, yeah, exactly! It's an

Haha, yeah, exactly! It's an example of the sucking and blowing conservatives have become known for, just more of their wildly successful campaign of mis/disinformation where Trudeau is god-like, expected to dispatch or expedite even intractable, complex and long-standing problems while simultaneously being not only wholly incompetent but somehow also utterly despicable. It's a continuation of their whole "the PM is not an entry-level job" that they impressed themselves so much with back when Harper slouched onto the political scene. It did take hold with the older guys; he's still called "the kid" by commenters here on the NO actually.
It's a bit alarming that only 54% of Canadians disapprove of "Skippy" (better than PP?) when so many more were against the convoy that he's sympathetic to; how do they not put two and two together? But then look at what's happening in the States. Far too many people just see politics as increasingly overzealous gamesmanship, and nothing else, or turn away entirely because they don't follow sports. (There does seem to be a noticeable uptick in sports mania generally of late though, does there not?) Sigh. Above all else, we just seem determined to "amuse ourselves to death."

The historical, treasured concept of "democracy" might be the only one that's still viable in our sullied political discourse if we can somehow manage to elevate it by separating it from the now facile word "freedom."

Just gotta say Tris - your comments are simultaneously enlightening and entertaining, and I'm grateful when you take the time to enrich National Observer readers with your insightful comments!

How nice of you to say

How nice of you to say Michael! Thank you.

Poilievre is both a pathetic,

Poilievre is both a pathetic, whiny little man and a big menace to our democracy. I wonder how to resolve this seeming paradox?