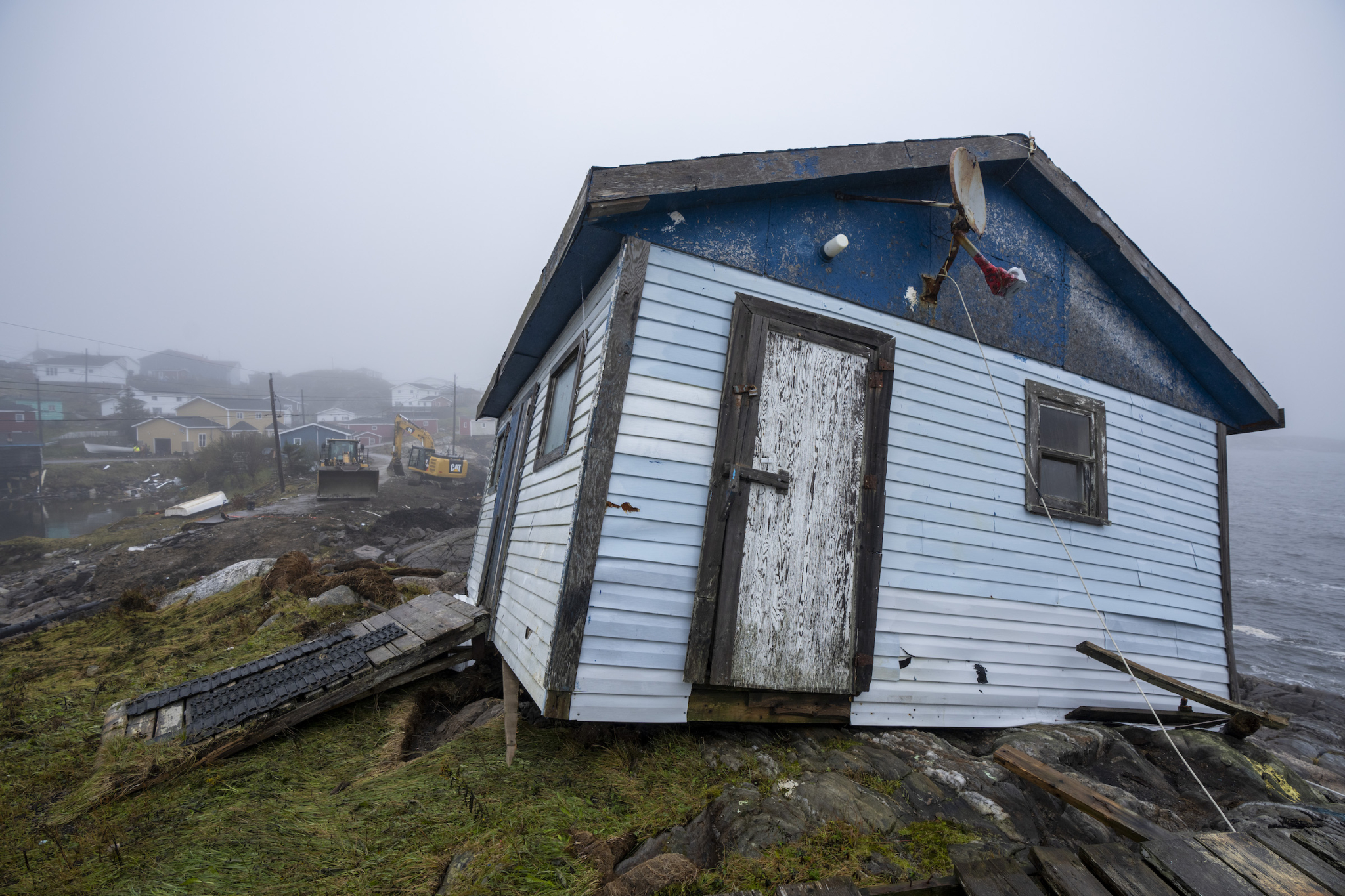 Workers start to clean up the devastation left by hurricane Fiona in Burnt Island, N.L., on Wednesday, Sept. 28, 2022. THE CANADIAN PRESS/Frank Gunn
Previous story
Next story

The desire for waterfront property on Canada’s east coast is fuelling a shoreline building boom, as landowners and developers rush to beat pending regulations aimed at curbing coastal development.

Climate change makes living in seaside locations increasingly perilous, yet Nova Scotia has long lacked regulations governing how far buildings must be set back from the ocean and some municipalities still have no zoning rules at all.

The risks became particularly clear in September 2022 when hurricane Fiona struck the region, carving off chunks of shoreline and flattening dunes in Nova Scotia and P.E.I., and flooding homes in Newfoundland.

Despite the obvious hazards, buildings are still going up on wetlands or in dune environments, which scientists and environmentalists say should be left in their natural state to provide a crucial buffer against erosion and storm surges.

To address the ongoing threat of coastal erosion and sea level rise, as well as the gaps in planning, the province instituted a coastal protection act in 2019 — first-of-its-kind legislation in Canada that will stipulate how far back, and up, from the water people are required to build. The province has said regulations would arrive sometime this year.

For now, people are rushing to build, recognizing this could be their last chance before the new regulations make it impossible to develop some locations, said Will Balser, coastal adaptation co-ordinator with the Ecology Action Centre.

But the fact they are rushing suggests they are aware there is a risk, he said. “If you're already worried about that before you even know what the act is actually going to say, chances are it's a dangerous place to be building.”

Residents in some Nova Scotia coastal communities have noticed the signs of increased development pressure.

When Steve Howe took a late December trip to the nearby beach at Green Bay, he found excavators levelling the sand dunes he once walked with his children to clear the site for a building and new gravel pad for RVs.

The desire for waterfront property on Canada’s east coast is fuelling a shoreline building boom, as landowners and developers rush to beat pending regulations that could curb coastal development. #HurricaneFiona #NSpoli

“It's incredibly disheartening because we can't bring that back,” Howe said. “How do you get a permit to put a foundation on sand?”

Howe’s dismay at the Green Bay construction was intensified by the fact he knew of another RV development planned near his home in the beachside community of Cherry Hill.

That RV park is separated from Cherry Hill beach by a pond, but Howe and others fear the construction of an RV park will disrupt the area’s coastal ecology by increasing traffic through the dunes and affecting water flows. Howe and other residents are calling for a moratorium on commercial development within a certain distance of the shoreline.

The situation echoes a broader pattern across the province where some communities still lack zoning, which fostered a jump in unsafe coastal development, particularly during the pandemic, advocates say.

In 2019, the province introduced legislation requiring all municipalities to have zoning in place by 2022, but that deadline has now been extended to 2024.

In the case of the beaches at Green Bay and Cherry Hill, there currently are no rules against the construction of RV parks on or near the shoreline.

In the next county to the south, a condo development was built in 2020 on a beach the Region of Queens Municipality had already identified as vulnerable to erosion, sea level rise and storm surge. This January, just months after Fiona hit, council voted to allow those units to be sold.

And just last August, concerns were raised when construction started on a house just above the high-water mark on the beach at Eagle Head, flattening the dunes and blocking a path long used by the community. The project had a building permit, but the contractor was fined for altering a watercourse.

Residents say that development is just one of others being built on beachfront properties in the area.

These kinds of developments are particularly troubling in Nova Scotia, which is experiencing some of the highest relative rates of sea level rise in the country due to a combination of climate change and land sinking as a result of the last glacial period.

Darlene Norman, mayor of the Region of Queens Municipality, which recently introduced 100-foot horizontal and eight-foot vertical setbacks, said the act will strengthen municipal rules and harmonize regulations throughout the province.

“As a municipality, for us to try and impose the rules would be far above our capacity as one municipal unit, and this is going to be a huge undertaking for the province,” she said.

In the last two years, Queens has seen a significant increase in building permits and land sold, and Norman said developers know that as long as they get permits before regulations take effect, they can squeak in under the old rules. Nonetheless, Norman said she’s not optimistic the regulations will arrive before the next building season. “This has been talked about for 20 years; we need to just do it and bite the bullet.”

Patricia Manuel, a retired professor in the Department of Planning at Dalhousie University, said rural communities have long resisted zoning and are now dealing with the consequences.

“You look at some development and wonder how this happens, but without the tools in place, [municipalities] pretty well have to approve developments when they come forward. So this will give them something with which they can say no,” she said.

This includes developments like the RV lots at Green Bay, where “the municipality should not be permitting those, but they haven't got the tools, or they've chosen not to have the tools, in their planning.”

Tom MacEwan, chief administrative officer for the Municipality of the District of Lunenburg (where the RV parks in question are located), said the municipality is working on finishing municipal zoning by 2024, which will complement the coastal regulations. Campgrounds, he notes, were a provincial responsibility until 2018 and, because they aren’t considered permanent, may ultimately be excluded from the coastal protection legislation.

Balser said the overlapping jurisdictions and regulations make regulating coastal development extremely complex. He believes protections could be strengthened by considering coastal health more broadly and by examining what density of development and placement of wells and septic systems the ecosystem can handle — especially when the shoreline is changing rapidly.

“All you need is one, not even particularly strong, tropical depression or hurricane to really nail your area and you're going to see decades of change overnight.”

Advocates say that the rapid pace of change and the mammoth task of regulating Nova Scotia’s 13,000 kilometres of coastline mean it will still be important for citizens to monitor the shoreline for unsafe development, even after regulations are passed.

At Cherry Hill beach on a recent January day, Howe pointed to the dunes that have lost three feet of height in just a couple years and said residents are committed to trying to protect them.

“We may more likely lose this [fight], but it’s about the next one we can do something about.”

Buyer beware yet again. I am

Buyer beware yet again. I am not surprised how many home buyers never bother to understand the risks with ocean waterfront ownership, especially with climate change. But the same is true anywhere in Canada purchasing a home without checking out environmental aspect where the home or development sits upon. I've seen too many homes affect by floods because development was done on known flood plans and climate change has turned a once in a century potential into almost an annual problem.

And we as taxpayers end up

And we as taxpayers end up bailing them out

This is the sad truth.

This is the sad truth.