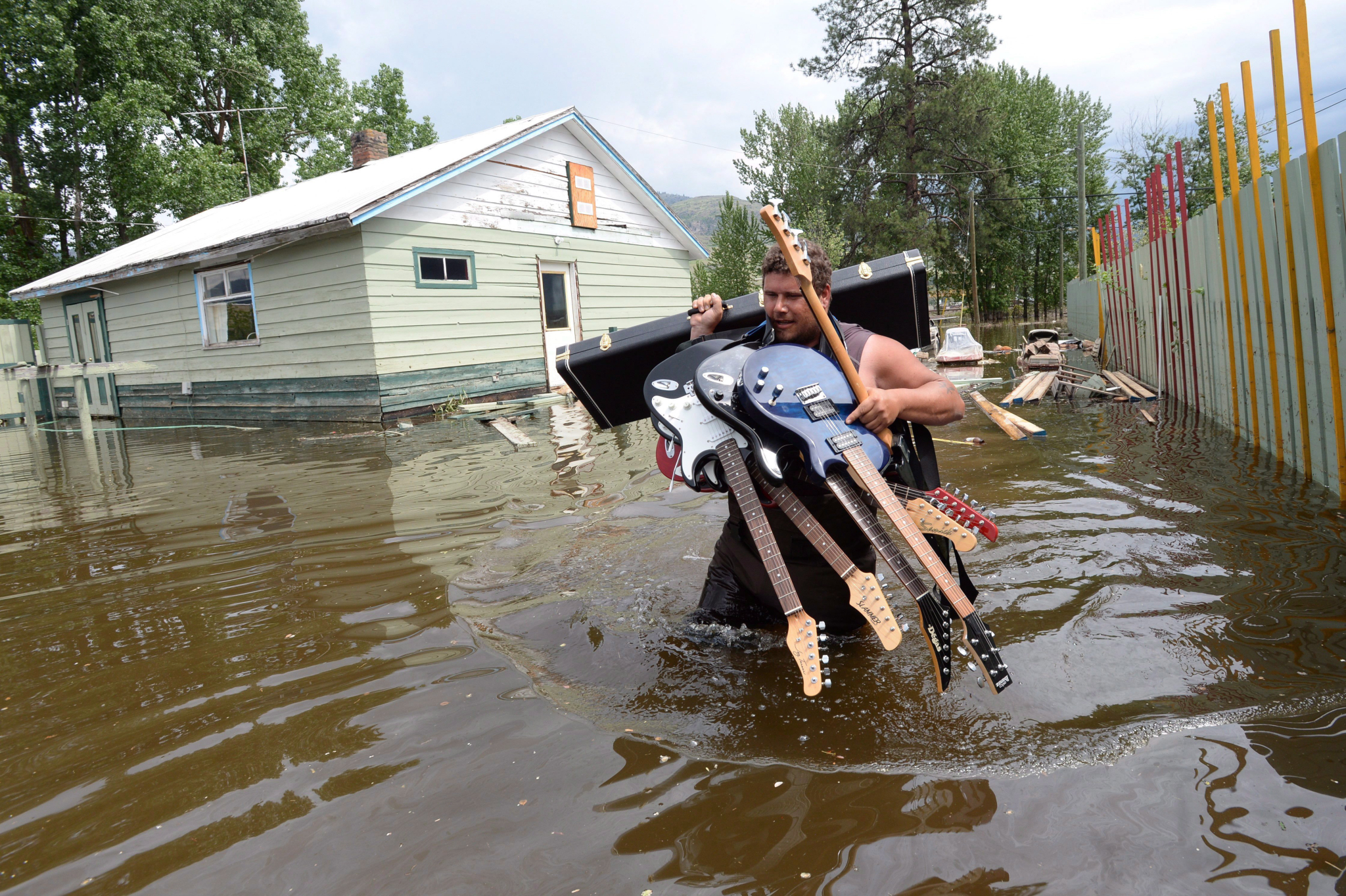 Resident Lars Androsoff carries his friend's guitars as he walks through the floodwaters in Grand Forks, B.C., on Thursday, May 17, 2018. THE CANADIAN PRESS/Jonathan Hayward
Previous story
Next story

After a flood swept through town four years ago, Grand Forks city council was faced with a heart-rending decision that will become all the more common as climate change intensifies extreme weather events: rebuild or move.

The British Columbia community, nestled at the confluence of the Granby and Kettle rivers, experienced the worst flooding the area had seen in 70 years, and ultimately decided to buy out about 100 properties, roping off a whole area of the community from future development.

Mayor Brian Taylor, who was not in charge at the time and is wrapping up his current term, describes his town’s dilemma as a “unique situation.”

“Once the decision was made that we were going to clear out and dehumanize that whole area, it started to move forward. And there was not a choice because basically what the plan involved was pulling out all the infrastructure, water and power. Everything was going to be removed,” he explained.

“So we couldn't have some people in, some people out. Now, that's a unique situation for us that may not exist everywhere else when they are faced with a move away from water.”

Moving areas or, in some cases, entire towns from climate vulnerable areas is known as managed retreat and is increasingly being discussed as an option for coastal communities and areas where flooding and erosion threaten lives and property. Recently, in the wake of September’s hurricane Fiona, Environment Minister Steven Guilbeault said some communities may need to consider managed retreat as an option.

Hurricane Fiona caused severe damage on the East Coast, especially in Newfoundland’s Port aux Basques, where homes were swept out to sea and a 73-year-old woman was killed while trying to flee. The town is still recovering, but Mayor Brian Button told CBC that while the whole town won’t need to move, some people are already certain they don’t want to rebuild.

Guilbeault’s comments were subsequently criticized by NDP emergency preparedness critic Richard Cannings, who is also MP for the riding that includes Grand Forks. “It is completely inappropriate for the Liberal minister to ask people to leave their families, their jobs and their homes because he doesn’t want to put in the work to plan and deliver on disaster supports,” Cannings said.

Guilbeault said the comments from the NDP aren’t accurate and take his sentiment out of context. His office listed the range of supports the government has offered to communities since 2015, such as the National Disaster Mitigation Program and the $3.3-billion Disaster Mitigation and Adaptation Fund. He also notes Canada is set to unveil its first national adaptation strategy — a countrywide plan for how to adapt to a changing climate — before November’s UN climate conference in Egypt.

With the release of Canada’s first National Adaptation Strategy to come before November’s COP27 in Egypt: talks of climate adaptation, mitigation, and sometimes, retreat.

“It’s a huge task — as big and diverse and challenging as the different climate hazards from coast to coast to coast. There are many federal adaptation programs already underway, in areas as diverse as disaster mitigation and adaptation, agriculture, wildfire prevention, home retrofits, Indigenous programs and flood insurance,” Guilbeault said in a statement to Canada’s National Observer.

“Now we are identifying gaps and working with our partners to ensure we have a comprehensive national strategy.”

However, on the ground, Taylor notes it hasn’t been simple for his community to get the help they need. He said Grand Forks has had a “real problem with the federal government.”

“The offers to purchase and what the federal government would cover, what (the) province would cover, were really convoluted. And so there were a lot of misunderstandings there,” he said.

A main issue for Grand Forks was higher levels of government supporting buyouts for people at the much lower value assessed after the flood, which rendered a lot of people unable to buy homes in town, explained Cannings. Some residents are now involved in a class action lawsuit against the province and logging companies, citing clear-cutting as the reason for the floods.

Affected homes in a 2009 Manitoba flood were bought out at pre-flood value by the province.

He notes the Disaster Mitigation and Adaptation Fund (available to provinces, municipalities, Indigenous governing bodies and the private sector for structural projects that mitigate climate risks) announced in 2018 is running low on cash. Infrastructure Canada has said it has received more requests for funds than it can provide.

Cannings says there needs to be a clearer strategy and more funds put towards protecting communities. The federal government also needs to stop greenlighting fossil fuel projects that exacerbate the climate crisis, he said, adding money spent on oil and gas subsidies would be better spent on helping communities adapt to climate change.

Importantly, Cannings said communities that have been identified as vulnerable to floods, fires and rising sea levels should be eligible for robust funding to “do some serious proactive work so that we wouldn't be reacting in this way.”

“And if we have to react, then you have to be there for people, like, right away and make sure that they are compensated in such a way that they can rebuild their lives,” he added.

Adapting to climate change is cost-effective

Adapting to a changing climate helps individuals and also saves the government money in the long run, explained Caroline Lee, author of a recent report from the Canadian Climate Institute, Damage Control: Reducing the Costs of Climate Impacts in Canada. Measures like better coastal flood protection could cut damages in half by the end of the century, she said.

For every dollar of investment made today, the report notes governments will get $13 to $15 back. But without adaptation, GDP and household incomes will suffer, in particular low-income households, which could see a 23 per cent loss if emissions continue to increase at current rates, the report said.

Rebuilding in the same place after extreme weather should also be avoided, explained Lee. Moving homes and businesses can happen before extreme weather events, too, if areas are known to be especially prone to disasters, she said. The Intergovernmental Panel on Climate Change (IPCC) estimates that worldwide, 20 million people will be displaced due to climate change by 2050.

However, the emotional, social and cultural costs of moving communities are huge, said Lee. Some communities may opt to move back from the shore if dealing with erosion, while others (like Grand Forks), will move whole areas.

“It's not just the financial cost … you're thinking about the cost of uprooting somebody's community … you're reshaping the community, you're changing the way people access their land and their property,” she said.

“... Those are really intangible costs that we haven't assessed in our analysis because it's, of course, really difficult to quantify.”

“Natural hazards, coupled with unpredictable and extreme weather events, can result in temporary or long-term evacuations from traditional territories, in addition to greater risk of injury and death from accidents while out on the land,” reads a Health Canada report from February.

In America, numerous Indigenous communities in Alaska and Louisiana are facing displacement after decades of the government not supporting their adaptation efforts.

Hurricane Fiona prompted calls for the forthcoming national adaptation strategy to have specific, short-term solutions for vulnerable areas in Canada. Cannings sent a letter to Dominic LeBlanc, minister of intergovernmental affairs, on Oct. 19 highlighting the need for a robust plan.

“In the coming months and years, families and municipalities will be forced to make difficult and painful decisions about the future of their communities. We need to work together to develop new approaches to dealing with the negative impacts of climate change,” read part of his letter.

“The status quo is simply not working to protect communities, workers, or the environment.”

In response to the letter, Jean-Sébastien Comeau, spokesperson for LeBlanc, noted the National Adaptation Strategy, and said the government has funded 259 programs through the National Disaster Mitigation program since 2015.

Canada can save billions by adapting to climate change faster