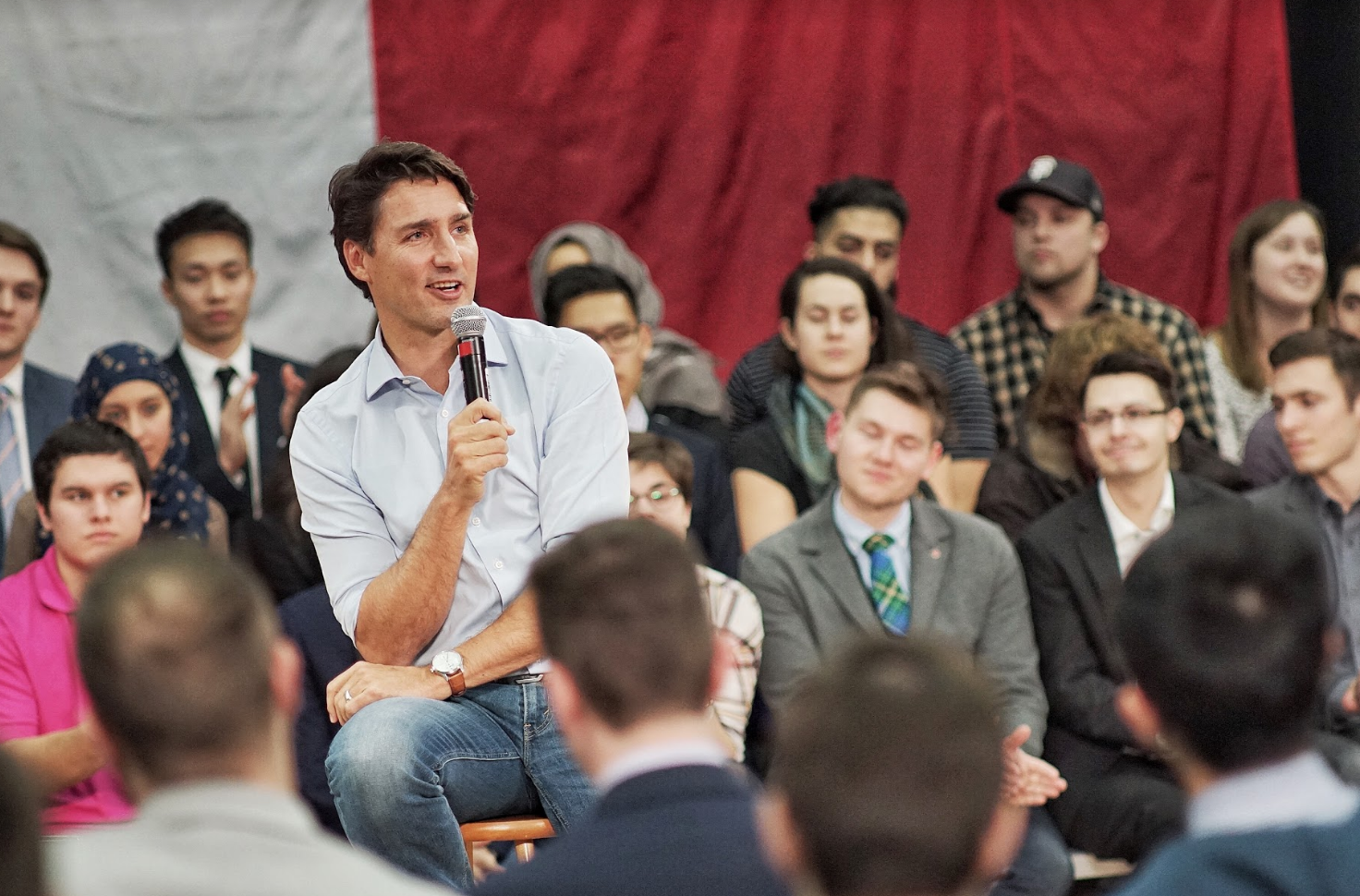 During a town hall meeting with constituents in Calgary on Jan. 24, 2017, Prime Minister Justin Trudeau told Albertans Canada needed to phase out the oilsands. Photo by Louie Villanueva
Previous story
Next story

Our photogenic prime minister recently let it slip that he thought Canada should progressively “phase out” exploitation of the Alberta oilsands and our "dependence" on fossil fuels.

One is tempted to applaud! But on a closer look, one sees that Justin Trudeau is struggling like a devil in a cauldron of holy water outside the gates of hell.

In effect, Mr. Trudeau must choose between provinces like Quebec and British Columbia, where many citizens strongly oppose proposed oil pipeline projects, and the interests of Alberta; between the oil industry magnates and the citizen opposition; between short-term goals in the oil economy and the federal government’s long-term international commitments for the reduction of greenhouse gases. In addition, he must protect the Canadian economy from the aggressive protectionism of the Trump administration.

In short, he is trying to catch many hares at the same time; in the proverb, if you run after two hares you will catch neither.

On the pro-oil side of this impossible equation, Mr. Trudeau has approved Enbridge's Line 3 to the Northern U.S. and the Kinder Morgan Trans Mountain expansion to Vancouver. He has also approved the Pacific NorthWest LNG project in B.C. to export liquefied natural gas, derived (mostly, but not entirely) from hydraulic fracturing. Now, as Mr. Trump decides to revive Keystone XL, Mr. Trudeau has to support the Alberta oilsand industry, which applauds the move.

Unfortunately, according to Professor Annie Chaloux of the University of Sherbrooke, Keystone XL will compound the inconsistency between climate politics and energy politics in Canada.

On the other side of the equation, Mr. Trudeau says he wishes to wean Canada off the oilsands, all while approving the construction of pipeline infrastructure that will tie us to oil for at least 40 years. Is this really a move to phase out the Alberta oilsands? That phrase seems to be an ill-advised attempt to square the circle.

After his election in 2015, many applauded Mr. Trudeau and his minister of the environment, Catherine McKenna, for accepting the conclusions of the fifth Report of the Intergovernmental Panel on Climate Change and saying they were anxious to ratify the Paris Agreement.

Much has been made of U.S. President Donald Trump's assertion that climate change is a Chinese plot. But China wishes to level off its emissions before 2030 by becoming a leader in green energy.

As professor Matthew Kahn explains in the journal The Inertia, China wants to improve the quality of life for its citizens who are faced with an intolerable level of pollution. Chinese leaders see their commitment to green technology innovation as a means to lead the race to economic and political supremacy.

If the climate deniers who surround Mr. Trump have not realized that green energy is the way of the future, the Chinese have. Mr. Trump can slow the progress of green energy in his country; he can't stop it. All that he can achieve is to make his country an economic HAS BEEN.

Mr. Trudeau must also choose between the energies of the past or those of the future. Because, no offence to Mr. Trump, but the implacable law of the market (and of nature) is "the survival of the fittest." Those who seize the moment in history will be the winners. Will Mr. Trudeau have the wisdom of the Chinese?

Our prime minister has a coat

Our prime minister has a coat of changing colours, varying tone amongst different audiences. I agree with the Line 3 Replacement, for Public Safety and to prevent Environmental Degradation. Kinder Morgan has replaced 2 sections of the Trans Mountain pipeline, either because they were issued a Decommission Order from the NEB, or with a nagging conscience decided on their own out of Duty of Care. The NEB has failed by NOT issuing Decommission Orders for the remaining 63 year old pipeline sections that has 82 Reported Leaks in 6.3 decades.

Oil runs downhill, just like the unmanned runaway train in Lac Megantic Quebec, another fiasco approved by Transport Canada who allegedly should be there to protect us, not allow Corporate Profits to increase because MM&A were approved to operate a Dangerous Goods Train without Conductors or Brakeman, the fellas who apply mechanical brakes.

There was a promise that new Railway Tank Cars would be built to more stringent DOT 111 specifications, how many have been built in North America since the 2013 inferno in Lac Megantic? I also question track maintenance when CN Rail has 2 derailments in one month at Gogama Ontario. When microsoft owner, Bill Gates became a majority voting shareholder of CN there were major layoffs of crews. When CP Rail did away with the highly dedicated Section Crews riding Putt Putt motor cars it was like the Wild West for train derailments. Now they have much longer sections of rail to be responsible for and ride in 5 Ton Crew Cab High Rail Trucks, hopefully without stereo systems and radios.

Mr Trudeau attends Club' Paris' then does an about face, the Fracking Disasters resulting in Quakes and surface fractures to the already fragile earths crust, allowing methane and toxic gases like H2s to escape to atmosphere are done by adherents to Club Armageddon poisoning humans and animals adjacent to Flare Stacks and also living downwind. Any Regulator who allows this should be forced to recuse themselves. But like Diana Daunheimer has pointed out in countless comments here in the National Observer, in Alberta it is pure Fox Theatre, the AEB is Oil Industry Funded and Self Regulated. We are into an era of Lawlessness in Canada!!! Our Legislatures must regain control, dismantling these renegade straw-man pseudo organizations.

Otherwise it is time for the citizenry to file Class Action Lawsuits against their complicit ghost line Legislatures, Ottawa included. Anywhere there is Gas Flaring the Corporation should be forced to collect it and pipe it to a Gas Co-Gen facility for Electrical Generation. This in Alberta would help minimize Coal Powered electricity generation. Here is a disgraceful example of airborne pollutants falling on grasslands.

Ref: https://thelede.blogs.nytimes.com/2008/03/21/italys-mozzarella-makers-fi... Open air burning of garbage in Italy resulted in the pollutants Up-taking into grass… something Albertans had better start considering.

Just curious how the author,

Just curious how the author, Mr. Montpetit, validates the statement..."the Pacific NorthWest LNG project in B.C. to export liquefied natural gas, derived (mostly, but not entirely) from hydraulic fracturing..." with the link embedded?

It is clear from the PNG site that the unconventional natural gas is extracted using horizontal drilling, combined with hydraulic fracturing. These targeted formations must be fractured to release and produce hydrocarbons.

"Hydraulic fracturing is the process used to extract natural gas from the Montney formation in northeast B.C."
"Natural gas will not flow from unconventional rock unless more pathways are created."
"Through a combination of horizontal drilling and hydraulic fracturing, shale gas reserves such as those found in the Montney basin..."

Would it be more accurate to state, based on the assertions of Progress Energy, that all the natural gas produced for this project is derived entirely from hydraulic fracturing?

If you had the opportunity to see Trudeau holler his final sermon about the oil-sands and industry at the U of C town hall, wisdom and winners, was the last thing that came to mind. We are ill-fated under his petrol imbued governance.