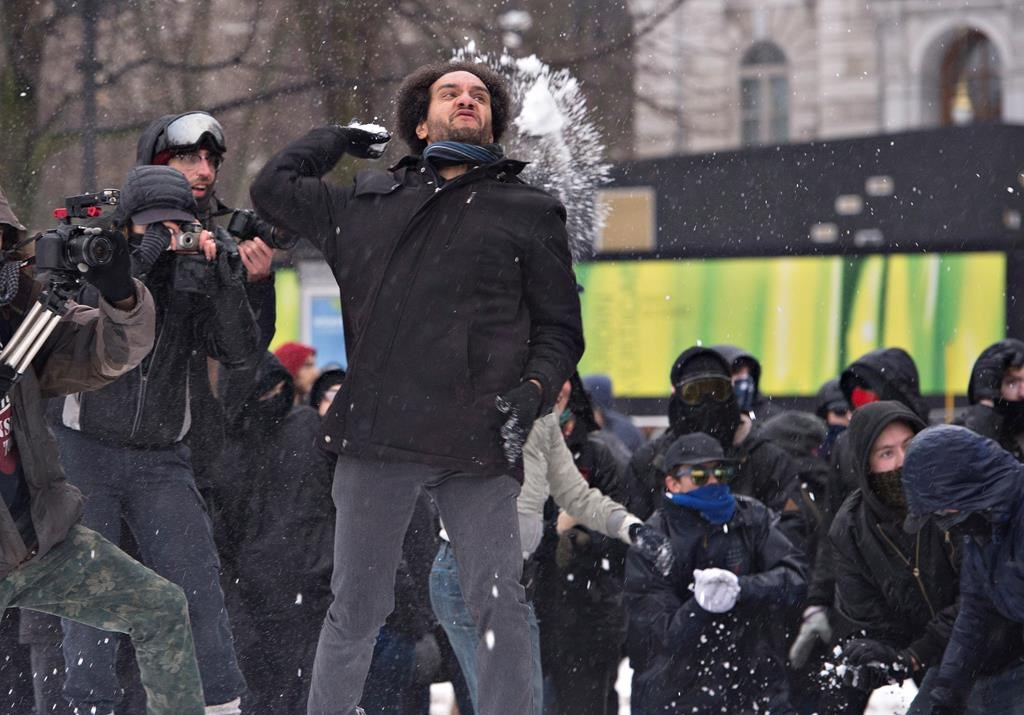 An antifacist demonstrator throws a snowball toward extreme right demonstrators in Quebec City on Saturday, November 25, 2017. Photo by The Canadian Press/Jacques Boissinot
Previous story
Next story

Tensions flared during rival demonstrations by right wing groups and their opponents in Quebec City on Saturday, prompting police to arrest dozens of people as they worked to keep the two sides apart.

Police arrested a total of 44 people in two separate incidents, according to police spokesman Andre Turcotte.

These included a first group of 21 individuals who were arrested early in the afternoon for "plotting to counter the protest" that had been organized by right wing groups, he said.

"Weapons were found: telescopic sticks, slingshots, bottles containing a liquid that is for the moment unknown, and in addition their faces were covered," he said.

The suspects were questioned and could face charges of conspiracy for unlawful assembly and wearing disguise for a dangerous purpose, he added.

Another 23 people associated with the counter protest were arrested later after they failed to disperse, Turcotte said.

No injuries or property damage was reported.

Police say about 1,000 people participated in the two demonstrations.

The Storm Alliance members waved flags, sang the French national anthem and loudly denounced the provincial government, while the La Meute members followed some distance behind in a silent march.

Storm Alliance spokesman Dave Treggett said the group's aim was to protest the policies of the provincial Liberal government, whose members are meeting in the city over the weekend.

The right-wing march prompted a counter-protest from a number of opposing groups, who began their gathering in front of Quebec's legislature.

A spokesman said the counter protest had been organized in response to what he called racist and violent statements by members of the right wing groups.

While the groups were kept largely separate, some skirmishes between police and the counter protesters occurred when they tried to block the march route of the right wing group.

Police used a chemical irritant to push back the counter-protesters, who responded by firing snowballs.

The event took place only metres away from the building where the governing Liberal party is holding a weekend congress.

Premier Philippe Couillard declined to comment on the demonstration, saying only he that didn't want to give the protesters "more attention than they deserve."