Don't be fooled: racists’ calls for freedom of speech is a total ruse 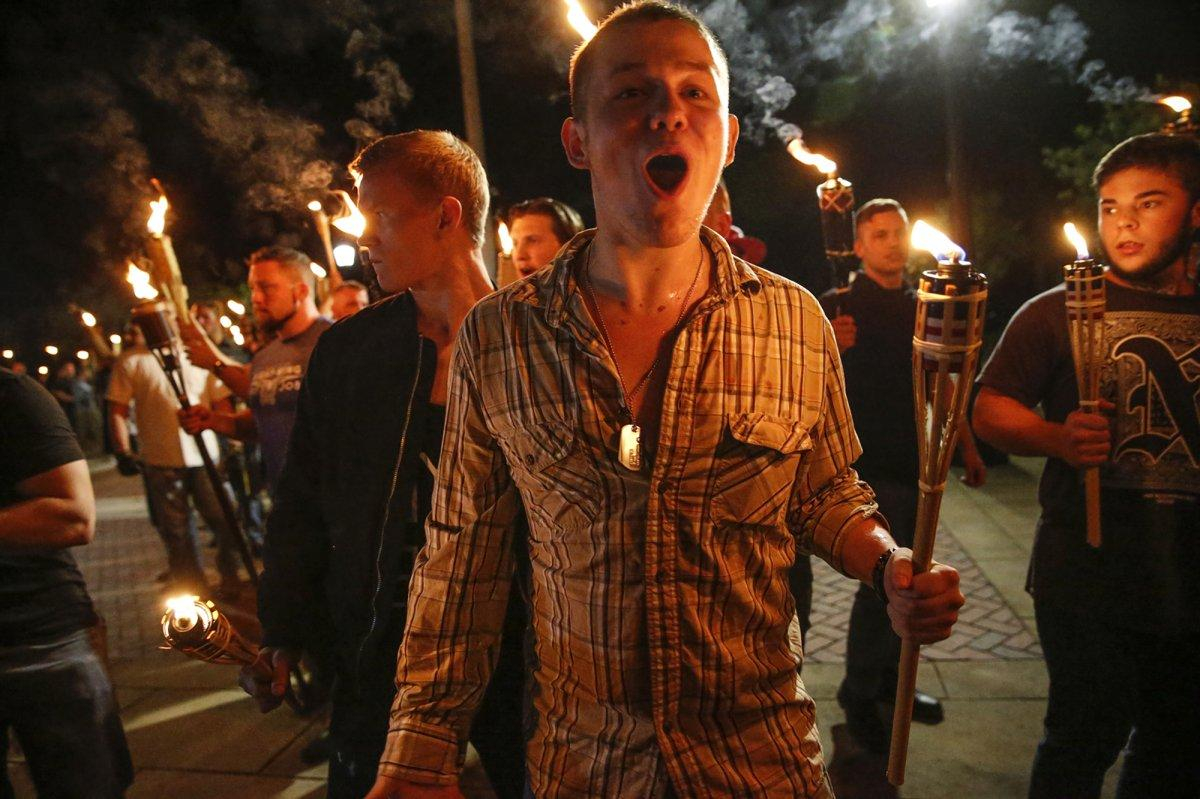 Aside from foregrounding the suddenly explosive visibility of the far-right movement, in the background, the real mark that the Charlottesville rally made was to the collective mind.

People who sympathize with vulnerable groups — whether classified by race, ethnicity, religion, immigrant status, gender, or sexual identity — scrambled to come to terms with what they saw. Was it a well-orchestrated but fleeting moment for 500 bad apples? Or was it an alarm sounding, waking us up to the real organizational capacity of their call to 'unite the right?'

Are Canadians shielded from the impact of this frightening activity?

Whether we call such groups white supremacist, nationalist, the alt-right, the new fascism, or just plain racists, Charlottesville may have been the largest of their gatherings, but it was not the first. Such demonstrations have occurred with alarmingly regularity in public spaces not only in the United States, but increasingly in Canada. Groups by the names of Pegida, the Soldiers of Odin, the Proud Boys, the III% Canada, and Le Meute may diverge in their particular obsessions with Muslims, Jews, refugees, or white nationalism, but they live among us, and demonstrate their hatred in plain sight.

Abundant police resources are allocated to apprehend and arrest terrorists whose insurgency is not only mistakenly conflated with Islam but whose activities entirely conflict with the faith. In contrast, virtually no resources are allocated to stop white terrorists.This is despite the fact that, as social scientists Barbara Perry and Ryan Scrivens have shown, white terrorist groups are responsible for more than 10 times the number of murders, arson, and violent assaults over the past thirty years.

Charlottesville produced a good deal of speculation about why such groups appeal to mostly (but not exclusively) young men. Different theories posit alienation, past abuse, the effects of permanent under-employment, toxic masculinity, and perhaps most notably the erosion of white privilege as plausible explanations.

While warranting interest, one can only think of the majority of individuals who share those conditions but who do not join racist groups. Yet the appeal of such groups is not only real — it may be intensifying as they learn ways of mainstreaming themselves. There are benefits in ditching explicit calls for genocide and the mass ejection of immigrants.

They have learned to mute their campaigns for the outright prohibition of diverse sexual identities. Vehemently denying racism, the extremist groups have adopted a more benign rhetoric. Instead of state oppression of racialized groups, they advocate for what they see as a return to an original white Canadian culture.

When they do so in business suits and in university auditoriums, they win a new respectability.

'Freedom of speech' the most powerful tool

Perhaps the most powerful of these strategies is the racists’ groups rallying cry of freedom of speech. Like motherhood and apple pie, who could be against this democratic freedom?

Like the famous quote, “I do not agree with what you have to say, but I'll defend to the death your right to say it” — freedom of speech enjoys no political loyalty.

In 2016, the U.S. was one of only three countries (along with Ukraine and Palau) to vote against the UN resolution condemning the glorification of Nazism. Why? Because they wished to preserve the “freedom of speech” of all, evidently including that of Nazis.

The American Civil Liberties Union successfully defended the right for the racists to demonstrate in downtown Charlottesville just as they defended the Ku Klux Klan rally in the Jewish neighbourhood of Skokie, Illinois in 1978. The ACLU favoured an interpretation of the First Amendment right in which the democratic freedom of speech for a violent group availed over the democratic freedom from discrimination for a religious minority.

Little wonder the credibility of the ACLU took a serious hit with its thousands of eager new donors since Trump’s election.

In Canada, Conservative Party leader, Andrew Scheer, threatened to cut federal funding of universities if they fail to uphold “free speech.” For Scheer, this failure is represented by the student protestors who prepared to take action against the white supremacist Canadian Nationalist Party. Party Leader Travis Patron was turned away from holding his rally at the University of Toronto in August. That was the month that I attended a meeting of Peel District Police Department. Parents and other concerned citizens urged the police to prepare for a return of white supremacists who, in the spring, had protested schools’ legal obligation to accommodate Islamic prayer. The police were torn between protecting vulnerable citizens’ Charter right to security of the person and what they interpret as their adversaries’ Charter right to freedom of speech.

Extremists’ cry for freedom of speech is evoked in bad faith. A legal term, it is appropriated by racists for the legitimacy it gives them. What they really seek, and often win, is a mainstream forum to spread their racist beliefs. They know their assembly would be denied if they were honest about their intentions. Freedom of speech cloaks their intentions with legitimacy. It is a clever ploy since any counter-protest affirms the fragility of their “right” and proves that is in urgent need of protection.

How do we know that it is a ruse? Because it is incongruent that racists would select this particular democratic freedom and not give a whit about the others like freedom of religious expression. When freedom of speech only counts for them and not for those who wish to protest their violent platform, the inconsistencies are glaring. Canadians’ freedom from discrimination cannot be enjoyed when the racists threaten their sense of belonging in society. It is insufficient to defend the abstract idea of freedom of speech when its abuse has real consequences for people’s quality of life.

The extremists deploy “freedom of speech” as a trick to recruit people and to galvanize a mainstream audience. Do not be fooled by it.

There are some women who

There are some women who appear in these white New Fascist assemblies, but count the mob: vastly peopled by men. Here is a sign that our culture, steadily opening with fits and starts to broader participation and equality for both sexes, has a long period of work ahead of it. New Fascist gang names like Le Meute, Soldiers Of Odin and Proud Boys are not only highly gendered, they summon up a nerve-jangling Jungian animus shadow . The fact is that as the Other rises, whether in the shape of women, Muslims, Jews or refugees, the formerly elevated thrust back - and their titles identify them with predatory animal violence, war, and weaponry.

"And their titles identify

"And their titles identify them with predatory animal violence..." I'm not trying to pick on you but humans are Primates and part of the Animal Kingdom, not a singular "other" unrelated to any other species on the planet. We need to eradicate the nonsense sayings people use that perpetuate myths that humans are somehow above other species and therefore have the right to subject them to whatever sick whims come to mind. Terms like "beat you like a dog", "behave like an animal", "dumb beast" and thousands more not only don't reflect the science showing most - if not all - non-human animals sentient, they expose the cruel, twisted mindset of humans and their behaviour for millennia. Secondly, humans are THE MOST vicious, sadistic, greedy, war-loving species ever to inhabit this planet. Even "peaceful, peacekeeping" Canada reaps blood soaked billions from arming genocidal regimes including Saudi Arabia. It matters not whether it is trade deals with China or weapon sales, these deals legitimize these regimes in the eyes of the world and help normalize genocide, corruption, violence, etc.

The whole point of free

The whole point of free speech is to talk, listen, find common ground and understand other's viewpoints. Political Correctness run amok is a far bigger threat than neo-nazis and suppressing issues ensures they will fester and spread. Talking about laundering overseas money in Canadian real-estate, overpopulation, immigration levels, illegal border crossings, and the full spectrum of affects these policies have is common sense, not racism. We need to decide as a country what we want and base policies around that rather than the free-for-all we currently have.

Religion is responsible for most of the bad happening in the world, including oppression of women, child exploitation to wars and genocide. It's a huge business and a massive taxpayer funded fraud. Athiesm is growing and we should no longer be supporting or protecting these backward, insular special interest groups promoting anti-science, unproven nonsense.

Universities are supposed to have radical speakers to teach kids to use their brains, but these bubble children have been so insulated from the world they melt down at the prospect of anything outside their comfort zone. So many comedians have been dumped from speaking that some - like Jerry Seinfeld - no longer book shows at campuses.

Extreme Political Correctness allowed gangs of pedophiles to prey on thousands of children in the UK for years because authorities didn't want to be seen as racist by investigating complaints. Rotherham is just one of many in an ongoing crisis.