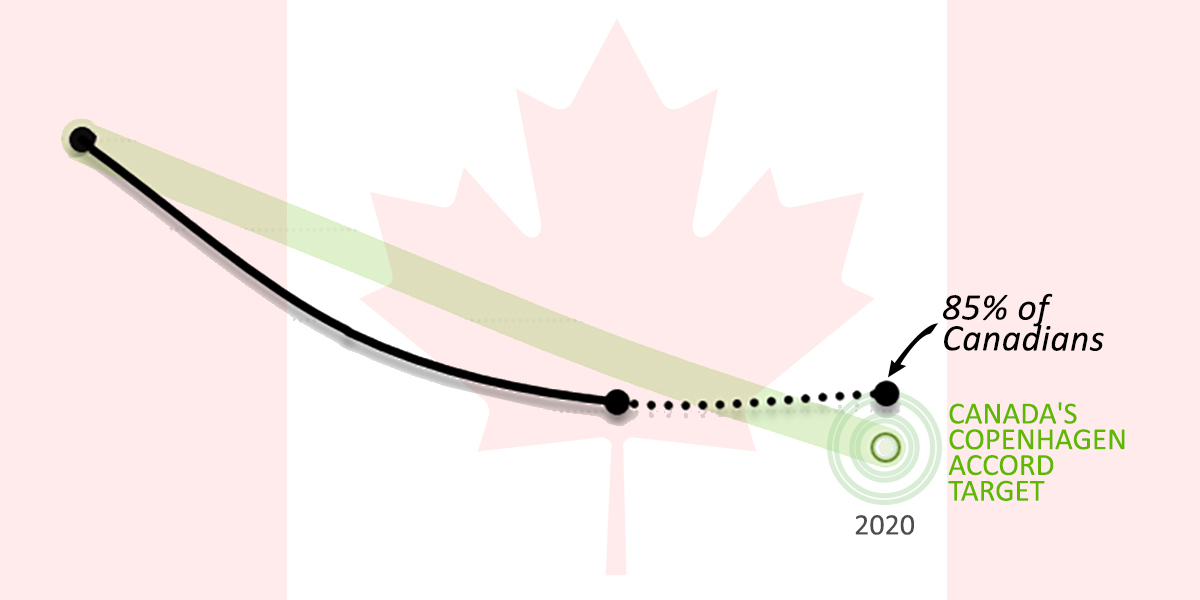 The vast majority of Canada has reduced climate pollution roughly in line with our 2020 climate target. Chart by Barry Saxifrage
Previous story
Next story

Remember our 2020 climate target? Turns out, the overwhelming majority of Canadians are close to reaching it, but our progress has been wiped out by oilsands pollution.

Back in 2009, Stephen Harper flew to Copenhagen and pledged that Canada would reduce climate pollution by 2020.

And (almost) all of us did.

As my first chart shows, the vast majority of Canada has reduced climate pollution roughly in line with our pledge.

You can see this in the falling black line on the chart.

This national super-majority is made up of provinces and territories that are home to 85 per cent of Canadians.

Two provinces — Alberta and Saskatchewan — took off in the opposite direction.

The next chart shows how dramatically that changes our national storyline.

The net result for our country is the red line. The hopeful story of achievement by 85 per cent of Canadians shifts to one of national climate failure by a wide margin.

The impact of Alberta oilsands pollution

Drilling into the data, we find the overwhelming driver behind our nation's 2020 climate failure is soaring pollution from Alberta's oilsands industry.

To appreciate the role of oilsands pollution, take a look at my next chart.

It shows changes in climate pollution — in millions of tonnes of carbon dioxide (MtCO2) — for each province during the Copenhagen Accord target years.

As you can quickly see, the largest increase in climate pollution is coming from Alberta.

And the black bar shows that the oilsands industry is projected to cause all of Alberta's increase.

More? How is that even possible?

Albertans are reducing pollution. Oilsands, not so much

Well, if not for the oilsands industry, Alberta would actually be on-track to reduce emissions by 2020. To illustrate, I created the chart on the right.

The green bar shows that the rest of the Alberta is projected to reduce emissions by 9 MtCO2.

But that towering black oilsands bar erases all those gains, many times over. Alberta's government allowed this one industry to increase its climate pollution by 54 MtCO2 per year.

To grasp the scale of this surge, note that the change in oilsands pollution exceeds the total combined emissions from four provinces: (Manitoba, Nova Scotia, New Brunswick, and Prince Edward Island).

This same pattern — surging pollution from the oilsands erasing the rest of Canada’s gains — can also be seen if we break down Canada's emissions by economic sector. My next chart tells that tale.

One sector in our economy — oil & gas production — is responsible for nearly all the expected increase in climate pollution.

Again we see that all of this increase – and more – is being caused by the oilsands industry.

Like the province of Alberta, the oil & gas sector would actually be reducing climate pollution, as all sectors need to do, if not for the oilsands.

The rapidly rising pollution from Alberta's oilsands industry isn't just a deal-breaker for our 2020 climate target. It's an accelerating threat which is eating up ever bigger chunks of our nation's climate commitments.

It is this trend that is poses the primary threat to Canadian climate goals and obligations. And it’s getting worse. A lot worse.

My next chart lets you see clearly where we are headed.

That black line rocketing upwards shows the percentage of our national climate budgets eaten up by the Alberta oilsands industry.

Oilsands pollution is set to eat 22 per cent of our climate target in 2030.

Even if oilsands emissions remain below the 100 MtCO2 “cap" set by Alberta, the damage keeps rising. As the chart shows, "capped" oilsands pollution threatens to eat up:

No solution in sight

As I detail in a previous article, oilsands climate pollution is also growing wildly out of proportion to its share of Canadian jobs (0.5%) and GDP (2.5%).

Those jobs and GDP are certainly welcome. But the climate budget-busting pollution that comes with oilsands expansion isn't.

When asked how Canadians can possibly meet our climate targets while expanding oilsands pollution as planned, the Trudeau government says it has a plan. Trudeau himself says “the national objective” is for Canada to “transition off of fossil fuels in the long run.”

The federal government has the responsibility to meet our nation's climate obligations. Unless they act soon, the accelerating trend of Alberta's oilsands pollution threatens to lock in climate failure for generations to come.

Some would have us believe we

Some would have us believe we can meet climate targets without causing offence to the fossil fuel industry.
That's a dangerous illusion. We must drastically reduce fossil extraction.

The most interesting thing

The most interesting thing about these figures is how few jobs and how small a part of our GDP the tarsands contribute. So for .5% of possible jobs, and 2.5% of our GDP, we are going to call this resource a nation builder.....and risk the perhaps the most fertile coast left on earth to get the dirty stuff to market???

I guess so. Most of us don't have the gumption to even call those fields what they are....oil sands the industry dubs them, believing that most Canadians don't recognize a euphemism when they hear one, or know what it means to consider the seven generations when counting the 'easy money'.

But what we must do is obvious. Shut them down. Transition now.

And it's not just the oil

And it's not just the oil sands - completely unknown amounts of methane and other toxins resulting from fracking are adding to the problem in ways that haven't even been measured. The amazing wealth in agricultural potential and human potential that Alberta holds is being squandered and irretrievably contaminated by the fracking industry.