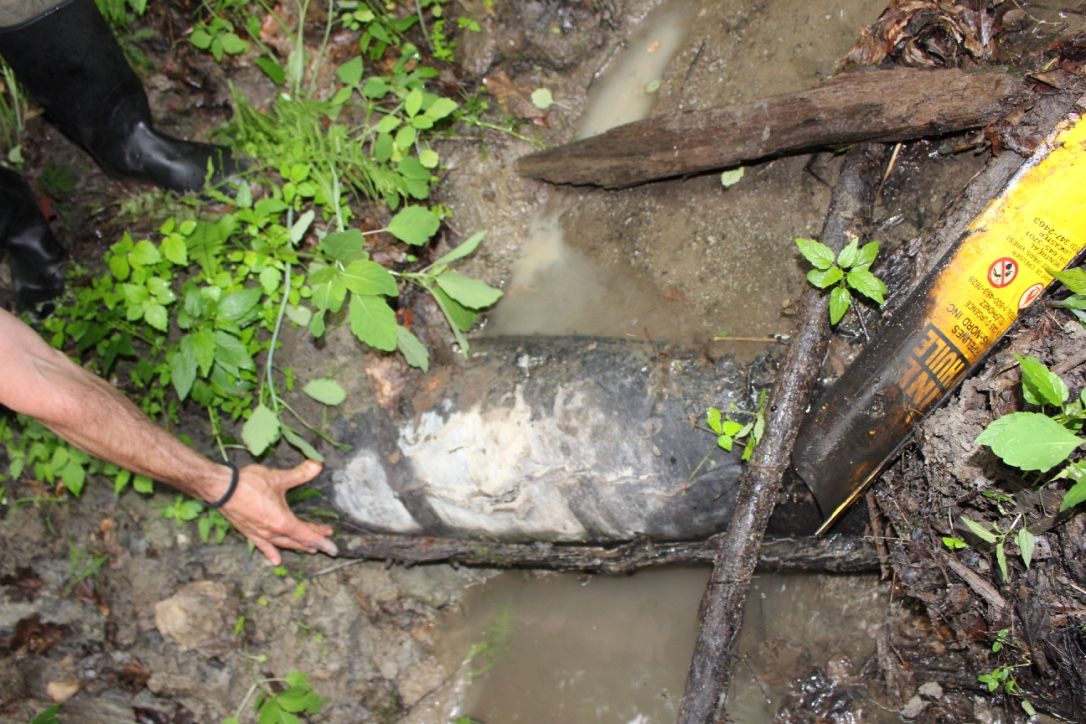 Residents in Saint-Lazare, a rural community west of Montreal, say they found pieces of a Trans-Northern pipeline sticking out of the ground at a stream about five kilometres from the Ottawa River on June 27, 2016. Photo courtesy of Lorraine Caron
Previous story
Next story

Pipeline incidents like oil spills are on the rise across Canada, and an aging Montreal-Ontario line that has been plagued with safety problems and leaks is a major reason why, says a new report released Thursday.

In 2017, there were 41 per cent more pipeline incidents nationwide than in 2016 — 173 compared to 122 — according to Montreal-based Équiterre, which examined Canadian government incident and spill data since 2004.

The group also found that there were more pipeline incidents in 2017 than in any year over the last decade, and incidents on Quebec’s pipelines last year accounted for over half since 2008. Most of those, 86 per cent, were on oil pipelines, as opposed to gas.

Équiterre accused the National Energy Board (NEB) of failing to protect Canadians and the environment from pipeline incidents. But Canada’s energy regulator says the spike last year can partially be explained by delayed reporting of incidents from previous years due mainly to a "misunderstanding" by one company of reporting requirements.

The report’s findings led to a charged exchange Thursday in the House of Commons between government and opposition NDP MPs.

“Pipeline management in this country is a joke,” said Alexandre Boulerice, NDP environment and climate change critic. “When will this government clean up its act and deal with these disrespectful oil companies?”

Transport Minister Marc Garneau replied that it was the “duty of any government” to make sure Canada can get its resources to market.

But this “fundamental task must be carried out in great respect of environmental rules,” he added, and “anyone who is responsible must take care of any incidents that do occur.”

Équiterre said its findings challenge the assumption that Canada’s pipeline safety regime is keeping the public and the environment secure.

It also illustrates the challenge facing the Trudeau government as it moves to purchase the Trans Mountain pipeline and expansion project, and overhaul its energy regulator, Équiterre said.

“The National Energy Board is failing to protect Canadians and the environment from pipeline incidents,” said Steven Guilbeault, Équiterre’s senior director, in a statement.

“Canadians should be worried by this report’s findings that show that the agency responsible for enforcing pipeline safety is not capable of handling the work that’s currently on its plate.”

There were 23 spills of either refined petroleum products or crude oil in Quebec from 2004 to 2017, the report stated.

The report is titled “Oil Pipeline Safety Failures in Canada: incidents, accidents and spills and the ongoing failure to protect the public.” It says the rise in Quebec incidents is “virtually all” due to the Trans-Nord Pipeline, operated by Trans-Northern Pipeline Inc..

National Observer has reported that Trans-Nord — which was built mostly in the 1950s and 1960s, and is known for supplying fuel to major airports in Ottawa, Montreal and Toronto — had made repeated violations and received serious warnings from high-ranking NEB officials.

Trans-Northern flows east to west, pushing roughly 172,900 barrels a day of refined fuel products from Montreal to southern Ontario. It has been the subject of protests that have temporarily shut it down.

Despite several NEB safety orders, incidents have increased on the pipeline, and it remains open.

“The alarming incident track-record of the Trans-Northern pipeline makes clear that enforcement measures for this federally-regulated pipeline are simply not working,” the report stated.

“The continued rise of pipeline spills and incidents in Quebec suggests that undue reliance has been placed on both exaggerated pipeline safety claims by industry and on ineffective enforcement.”

NEB says rise in incidents due to ‘misunderstanding’

Équiterre found that there are "months and even years between the time when incidents occur and when they are reported." It said technology used by industry only detected 39 per cent of spills and incidents.

The group is calling for an overhaul of regulators’ incident tracking systems and wants "increased enforcement" by the NEB.

National Observer asked the NEB about the rise in incidents over the decade, the spike of incidents for Trans-Northern, the incident reporting lag and technology used by industry.

NEB spokesman Marc Drolet responded to the Trans-Northern spike in 2017 by saying a majority of incidents that year were “related to events that occurred in previous years.”

“The fact that the incidents were reported late was due mainly to (Trans-Northern’s) misunderstanding of the NEB reporting requirements,” he said. The regulator “clarified” these requirements and has since updated its guidelines to reflect the clarifications.

“The increase was mostly driven by reports of a specific type of incident,” said Drolet. “The NEB focused a significant amount of effort at ensuring the reporting requirements for this incident type is clear. We are seeing the results of those efforts with the increase seen in 2017.”

The NEB has also moved to implement a new reporting system since 2015 alongside the federal transport regulator. That system has reduced the number of discrepancies between multiple databases, he said.

As well, the regulator is part of a Canadian Standards Association working group with the pipeline industry to develop “standardized definitions and performance indicators.”

John Bolenbaugh, former Enbridge employee and a navy veteran brown star that became a U.S. industry whistleblower after the July 25, 2010 oil spill near Marshall, Michigan ("Kalamazoo"), points out that oil and gas companies lose more money shutting down a pipeline for repairs than they do in paying fines. He cites for example, where a fine might be $1 mln per day, revenues are $8 mln per day. He also notes that business loss insurance pays out when there is a spill. As well many of the spill cleanup companies are owned by the oil and gas companies. Additionally, spill damage allows companies to buy land cheap, which they hold in inventory until after "cleanup" when the market improves.

Hard for any reasonable and

Hard for any reasonable and kind-hearted person to watch but worth the 75 mins. https://www.youtube.com/watch?v=DgdG-XtQQZg