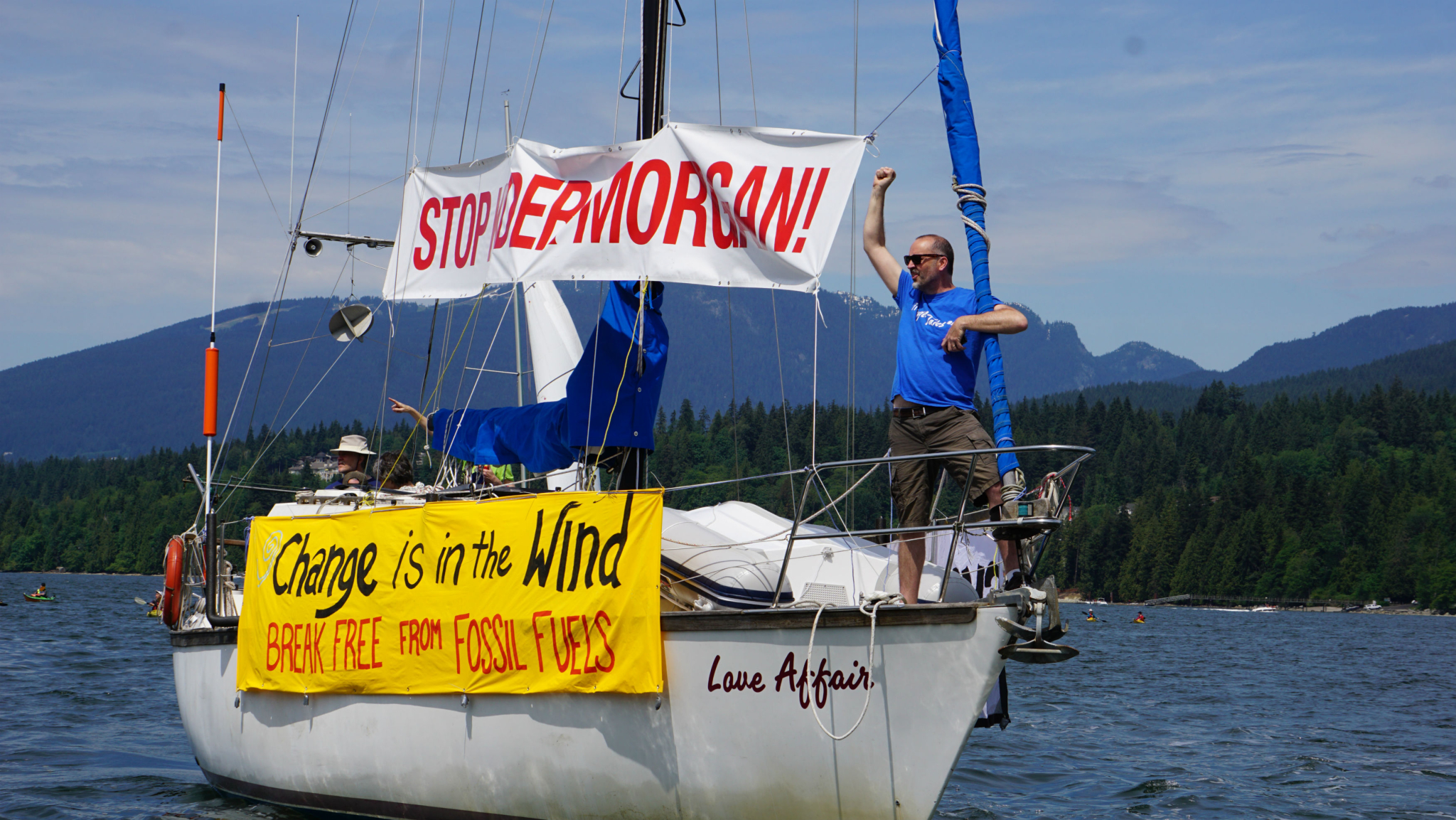 Stephen Collis, local poet and writer, leads the way on a small boat to the Kinder Morgan terminal in Burnaby, B.C. on May 14, 2016, as part of a protest against the Trans Mountain expansion project. File photo by Elizabeth McSheffrey
Previous story
Next story

Kinder Morgan's Canadian unit, Trans Mountain, says a recent environmental violation at its Burnaby oil terminal was caused by "defective equipment" while its failure to report another set of similar violations at the same site was due to a "calculation error."

Violations of the federal Fisheries Act have been an ongoing problem at the Westridge Marine Terminal in metro Vancouver, National Observer reported on June 12.

The site is a key construction zone for the proposed Trans Mountain oil pipeline and tanker expansion project. The company has admitted it repeatedly violated noise limits during pile driving in recent months, which put local marine mammals such as harbour porpoises and Steller sea lions in harm's way.

On Wednesday, the company said that it neglected to mention three separate violations in a recent construction monitoring report, submitted to federal officials. The company made the admission, relating to excessive noise levels on three different days in May, in a letter to Canada's pipeline regulator, the National Energy Board, from Scott Stoness, a vice president responsible for regulatory compliance at Kinder Morgan Canada.

After discovering the error, the Texas-based company reissued the report with corrections along with new "measures that have been put in place to prevent future non-compliances," Stoness wrote in the June 20 letter.

Stoness also said that the company was conducting an internal investigation to determine what went wrong and that its environmental inspector would review noise monitoring data during pile driving and intervene if needed.

"Trans Mountain is committed to reducing our impact on noise levels within the surrounding community and will work diligently to ensure that Trans Mountain meets the target noise limits," Stoness wrote.

When asked by National Observer for further comment, the company repeated the assurances from Stoness that it was taking action to address the situation.

The federal pipeline regulator, the National Energy Board, told National Observer in a statement on Thursday it was assessing Trans Mountain's June 20 letter.

Trudeau has said his government approved the project following a rigorous review to ensure it could proceed safely, but opponents say Kinder Morgan's recent environmental violations are cause for concern, in addition to pushing Canada's climate change targets out of reach by encouraging increased oil production.

Stoness wrote that the three newly-identified violations, flagged in the corrected report, occurred on May 2, May 18 and May 29. The last incident occurred on the same day that the federal government announced it was buying the Trans Mountain pipeline and other Kinder Morgan Canada assets for $4.5 billion after the company threatened to abandon the project due to the risk of commercial failure.

Trans Mountain has blamed regulatory uncertainty caused by opposition from the B.C. government for causing costly delays, but provincial and municipal officials have said that the company has triggered delays on its own due to its struggles meeting mandatory conditions and obtaining permits.

The Stoness letter came eight days after his colleague David Safari, vice president of the Trans Mountain expansion project, sent a letter to the federal Fisheries and Oceans Department that apologized for previous noise violations committed during pile driving earlier in 2018.

Safari said that one of those incidents, in April, occurred because workers proceeded with pile driving, despite knowing their equipment used to measure the underwater sound was "defective."

"Site workers mistakenly believed the mitigation actions taken in response to the broken hydrophone met the intent of the condition and that adequate measures were taken to mitigate risk to marine life," he wrote in a letter to Tracey Sandgathe, a regional manager from the fisheries protection program at the federal Fisheries and Oceans Department (DFO).

"Trans Mountain now has back-up hydrophones available in the local area. In addition, Trans Mountain revised its internal processes to ensure that, where an equipment failure occurs during impact piling, the piling work will stop until the replacement hydrophone is deployed and all other conditions of the Authorization are met."

Trans Mountain delivered Safari's letter to DFO on June 12, the same day that National Observer reported the department had sent the company a warning letter on June 6, noting that it might prosecute for violations of the Fisheries Act.

While Safari said in his response that Trans Mountain was taking corrective action, he also expressed disappointment about how the federal department was handling the situation.

"Trans Mountain was surprised to receive the letter pertaining to matters dating back to January, February and April of 2018, particularly, given the many written and face-to-face exchanges that have occurred since," Safari wrote in the June 12 response letter.

Safari's letter also noted that DFO had failed to request information or conduct site inspections about its approach. He added that the company wants the department to designate a specific representative to handle future communications.

"As stated earlier, Trans Mountain firmly believes it has engaged with DFO directly, transparently and collaboratively through ongoing site inspections, IR exchanges and required reporting," Safari said. "Trans Mountain also looks forward to DFO's collaboration in practice, moving forward as we embark on the construction of a project of national importance."

DFO told National Observer in a June 15 statement that it believed the pile driving activity by Trans Mountain was unlikely to cause harm to marine mammals on site, since the department has set a conservative threshold that was designed to avoid causing harm or other impacts.

The department also confirmed that it didn't have any observers on site but was relying on expertise from observers hired by Trans Mountain.

DFO struggled to respond to questions from National Observer about its correspondence with Trans Mountain, taking nearly a week to say that it had no reaction to the company's comments about being "disappointed" in the process.

The federal department also defended the work it was doing during earlier meetings and correspondence with the company that led up to the June 6 warning letter.

"Correspondence and meetings with Trans Mountain were necessary prior to issuing the warning letter for DFO to seek further clarification and better understand the non-compliance issues and remedial measures undertaken by Trans Mountain," the department said in an email sent on Thursday to National Observer by media relations manager Frank Stanek.

The department also said that it was "vigilant" in its oversight of Trans Mountain.

The banging, ie piledriving, occurred on June 13, 14 and 15, and was as loud as ever at my house. Whatever they have may have done to mitigate the noise has not had any evident effect here. The operation should be shut down until they can find a much better way to install the piles; perhaps they should consult with the people who install telephone poles.

When protectors defy a

When protectors defy a corporate captured judge's injunction, they are prosecuted to the full extent of the law, to supposedly maintain the integrity of the law. When Kinder Morgan breaches the soft conditions for it's approval, the law looks the other way.

Is this the best they can do

Is this the best they can do regarding fines? This is probably not even the price of a night out for dinner Stoness and his people not a deterrent in the least.