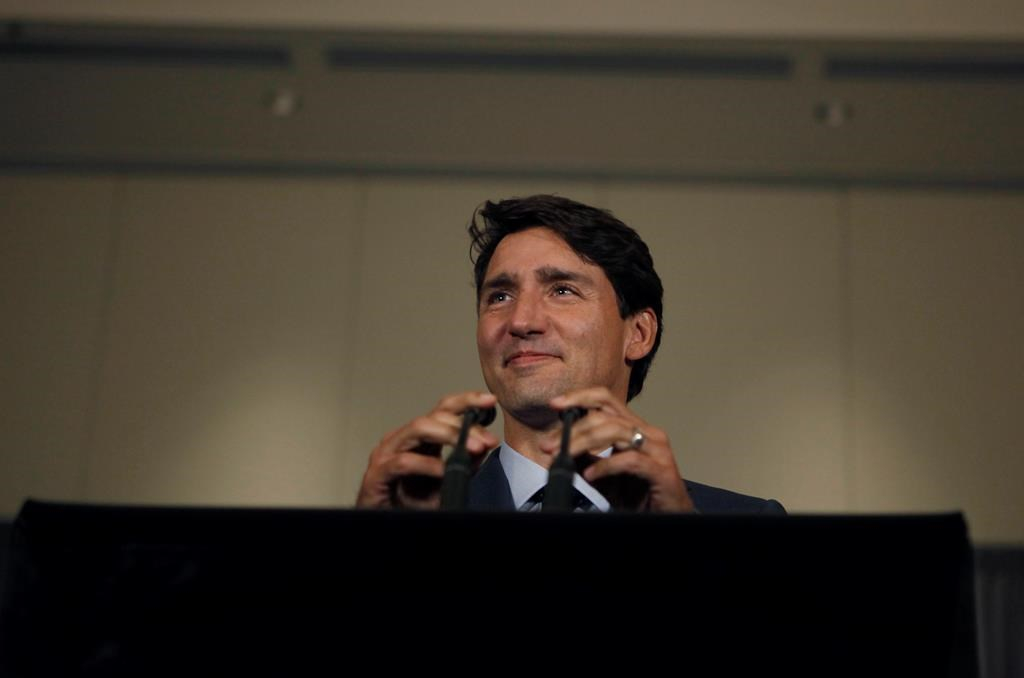 Justin Trudeau answers questions from the media during a question period at the Vancouver Island Conference Centre during the final day of meetings at the Liberal cabinet retreat in Nanaimo, B.C., on Aug. 23, 2018. Photo by The Canadian Press
Previous story
Next story

Conservatives, from leader Andrew Scheer on down, are predicting that Maxime Bernier's decision to quit their party and start his own will end up helping Justin Trudeau's Liberals win re-election next year.

But one notable person isn't taking that bet: Trudeau himself.

The prime minister was careful Thursday, as he wrapped up a three-day cabinet retreat on Vancouver Island, to avoid wading into the Conservatives' civil war.

"Over these past three days, I've remained focused with my team on how we're going to continue to serve Canadians," Trudeau said at a news conference.

"I'm going to let Conservatives focus on themselves, as they are right now. We're going to stay focused on Canadians."

Federal cabinet ministers repeated much the same message, as did Liberal MPs trotted out at the Conservatives' national convention in Halifax to respond to the Bernier bombshell.

Their reluctance to gloat over the Tory turmoil likely reflects an old political maxim: Never get in the way of an opponent who's self-destructing.

But it also reflects a genuine caution. Liberal insiders privately admit they don't know how Bernier's departure will affect the Tories — or, by extension, their own party — in the long term.

If other Conservative notables — including MPs but, most importantly, donors — follow Bernier in his bid to create a new, more libertarian party, that could well split the Tory family and deplete their well-stocked war chest. In that case, the Liberals could indeed stand to benefit — particularly in the renegade MP's home province of Quebec, where the Conservatives have been hoping to make gains.

If, however, Bernier finds himself isolated and unable to attract much support, he could quickly become irrelevant. In that case, the Liberals would have lost one of their best cudgels with which to beat Scheer, who would no longer have to placate or account for the controversial views of his prickly former leadership rival.

Liberal strategists privately point out that politics, in an era when few voters feel any long-term attachment to any particular party, has become highly unpredictable — which is why Trudeau stuck to his party's own game plan during his wrap-up news conference Thursday.

"As we head into the fall, our government will remain focused on building a better Canada for all Canadians. Our priority is and always will be helping working people get ahead," he said.

Trudeau did, however, take one shot at the Conservatives, over the revelation that a Tory robocall in a Toronto riding used the cancer diagnosis facing the riding's Liberal MP, Salma Zahid, to try to recruit new members.

"We all have friends and family members who've struggled with cancer. And for any political party to bring that element into partisan politics ... I hope all Canadians regardless of political parties are better than that," he said.

"And I really hope that the party responsible for this responds appropriately and commits to never do anything like this again."

The Conservatives have blamed the robocall on one now-former member of the party's riding association.

Zahid announced last February that she had been diagnosed with stage four non-Hodgkin's lymphoma. Trudeau said Liberals are relieved that Zahid's cancer is now in remission.

And with just over a year until the next federal election, Trudeau gave no hint Thursday of any change in direction. Indeed, while he did not directly rule out proroguing Parliament this fall and laying out a new pre-election agenda in a throne speech, Trudeau did say, "I don't really believe that it came up" during the retreat.

Liberals will unbridle their

Liberals will unbridle their arrogant disdain as part of their 2019 election campaign. Trudeau runs a tight ship. Timing is everything.