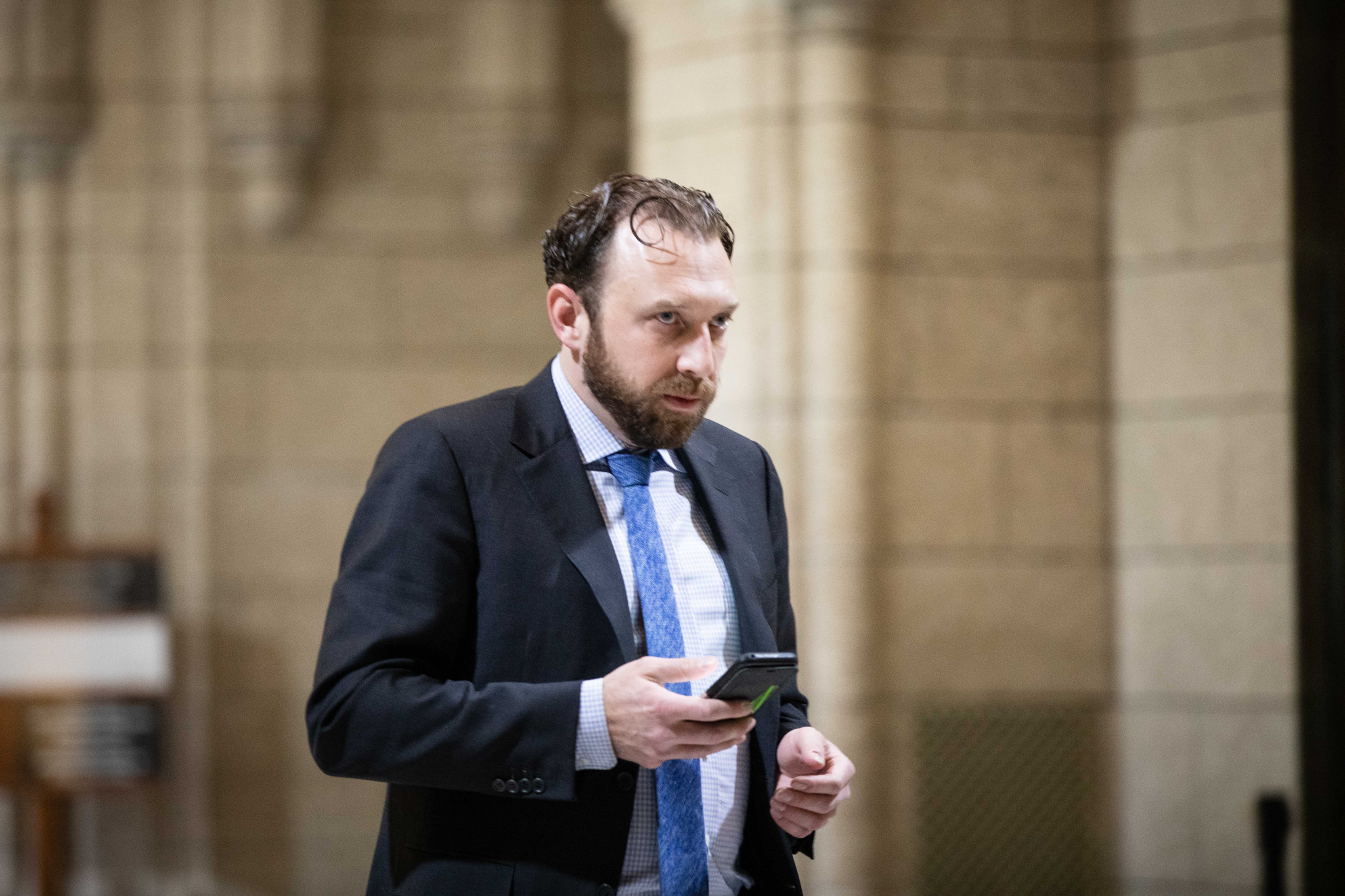 The House of Commons ethics committee demanded Tuesday that right-wing group Ontario Proud hand over information about its out-of-province funding and reveal details about the telemarketing firm it used to blast out millions of texts and phone calls during the last provincial campaign.

The official requests from the committee came after a combative appearance by lawyer Ryan O’Connor, one of the founders of Ontario Proud who currently sits on its board of directors and counts the group as a client.

Ontario Proud — which O’Connor said wishes to promote things like lower taxes, accountability and ethics in government and “personal freedom" — was a major provider and amplifier of voices against former Ontario premier Kathleen Wynne, and last month said its next objective was to "take down" Prime Minister Justin Trudeau in the 2019 federal election.

The group's attacks on Wynne at times became quite personal, including the posting of memes, according to news outlet Canadaland, that mocked her physical appearance and called her a “scumbag.” It declared "victory" after the Ontario election in June and revealed its “aggressive voter contact campaign” that included street teams and lawn signs in addition to the texts, calls and online posts.

The group's apparent success has helped spawn sister organizations in other provinces.

Financial disclosures also released Tuesday showed Ontario Proud had raised over half a million dollars during the Ontario election, and that most of this money was coming from corporations, including large donations from property developers.

Ontario campaign finance laws prohibit corporations and unions from donating directly to political parties, but these donations are still permitted to outside political groups.

Ontario Proud has been accused by some of spreading misleading opinion. During his opening remarks to the committee, O’Connor said that "what is misinformation or not is in the eye of the beholder.”

He told National Observer that what he meant by that was that “someone who disagrees with something that one says online, may just unfairly characterize that as ‘misinformation’ when in actuality it’s just a different political opinion.”

He also appealed to parliamentarians to avoid the “unnecessary regulation of online political speech.”

But O’Connor found himself in several tense moments with committee members, as they peppered him with questions about the group’s voter ID campaign, and privacy implications related to the personal information the group had gathered.

Following his appearance, he walked out of the committee room and told media that the meeting had amounted to a “partisan show trial.”

“I came in good faith to provide evidence to this committee today, about our views on data breaches that have occurred digitally with respect to political campaigns,” he said.

The financial disclosures released Tuesday showed the three largest donors of Ontario Proud, a registered not-for-profit with the address 36 King Street East in Toronto, were Merit Ontario ($50,000), which opposes restricting the right to bid on contracts to union members, residential developer Mattamy Homes ($100,000), and Nashville Developments, another developer, according to Global News.

Ontario Proud did receive money from outside the province, O’Connor revealed to the committee, but insisted it was "not for third party political ads” and that it was not foreign in origin.

Committee member Frank Baylis, a Liberal MP, requested that Ontario Proud produce information about all funders who provided money to the group who were not from Ontario.

O’Connor said the group’s budget was spent “predominantly on advertising” and also covered office overheads and a staff. He said the group did not transfer money to its sister organizations in other provinces.

“We're not able to do that because of the various legislative regimes in each of the provinces,” he said.

He noted there were other third-party players, such as non-profits Tides Canada and Leadnow, which he characterized as undertaking "anti-resource development campaigns.”

Leadnow made a large push during the last provincial election to oppose a Progressive Conservative government, using more than 150 community-based phone banks that likely made some 100,000 calls, National Observer reported.

Kent asked O’Connor if Ontario Proud had a “foreign benefactor.” O’Connor said the group was “100 per cent domestically funded.”

In October, Leadnow was cleared by the Canada's election watchdog of any foreign interference or improper spending in the 2015 election after an extensive investigation.

'Is Olivia a real person?'

During the last Ontario provincial election campaign, Canadaland compiled reports of people receiving texts from multiple numbers that identified themselves as “Olivia from Ontario Proud” and asking them how they were going to vote. Several people said they had not provided their phone number to the organization.

Founder Jeff Ballingall would not reveal to the news outlet the name of the telemarketing company or companies involved in the effort, or who “Olivia” was, other than to say the contractor was responsible for using the name.

At the committee Tuesday, both co-chairs, Liberal MP Nathaniel Erskine-Smith and NDP MP Charlie Angus, probed O’Connor with questions about who “Olivia” was, and why “she” was able to send out hundreds of thousands of text messages.

"I can’t speak to who Olivia is, at the call centre,” replied O’Connor.

“If ‘Olivia’ doesn't exist, would you not agree you were sending false information?” Angus shot back. "‘Olivia’ sent a million texts. Either ‘Olivia’ exists, or it’s a front."

O’Connor said the name “Olivia” came from the vendor, but he said he couldn’t speak to where the vendor obtained its information. He said Ontario Proud received “aggregate data” from the results of the phone calling.

Erskine-Smith also asked what call centre Ontario Proud used. "We don't disclose the name of our vendors,” O’Connor replied. He also said, "I can’t speak to what work any other vendor that we've utilized has done in the past.”

“Where did you get all these (phone) numbers?" Angus wondered. "Getting cell numbers is really difficult.” O’Connor replied that the provincial NDP ran a similar campaign. "Yeah, but the NDP is a legitimate political party,” Angus said.

The MP demanded to know if Ontario Proud would be using the phone campaign data in the 2019 federal election, and whether it would be transferring that data to the group’s national campaign, should it materialize. O’Connor said it wouldn’t.

Angus wondered what the group planned to do with the information, then, if it wasn’t going to use it federally. He made an official request for the group to reveal the vendor so the committee could find out who “Olivia” was.

Ontario Proud started as a Facebook page in early 2016, and has grown to include roughly 425,000 followers on Facebook, 78,000 followers on Instagram and 100,000 email subscribers, among several other web properties. In his opening remarks, O’Connor called it "the most engaged page in Ontario politics.”

Policing all that content is a complex undertaking. Ontario Proud wound up hosting one comment that Wynne was an “ugly nasty greedy no good money grubbing snot faced witch” and “the ugliest human dyke who ever existed,” Canadaland has also reported.

Ontario Proud told the news outlet it has since implemented community guidelines and cracked down on such slurs and disparaging comments.

Angus pressed O’Connor to outline why he thought that kind of "really aggressive, misogynist hate stuff” was acceptable. O’Connor replied that the comments came from a user, similar to what would be found on a news outlet's website. Ontario Proud, he said, "never produced that comment” and the group does "our due diligence" to try and eliminate that content.

Baylis asked if there was any editorial oversight at Ontario Proud to ensure that the group did not partake in hate speech. O’Connor said the group monitors its online entities on a day-to-day basis, and also said there was an “automated program” aimed at catching misogynist terms. He also said personal data of supporters of Ontario Proud is "kept confidential."

Outside of the committee, O'Connor elaborated on the origin of the comment and the group's process for eliminating such speech from its online entities.

"We implement controls...that will automatically delete comments if that search term is used, be it hateful or offensive or misogynist. We take great pains to eliminate that content," added O'Connor.

"We don't want that. We don't want our pages to be a forum for that kind of material. That exists all over the web, be it on the CBC website, or on the Globe and Mail website, and is something that is difficult for everyone, including media institutions, to police in this day and age, and we do a good job in our view."

I'm of two minds about some

I'm of two minds about some of this. On one hand, O'Connor seems like scum, and many of the supporters of Ontario Proud are scum. But in a democracy, scum get to vote too, and if I get to call them scum, they get to say nasty things about Kathleen Wynne. Fair's fair. So going after Ontario Proud over some unpleasant comments made by commenters on their website seems wrong.

On the other hand, I don't like the ability of corporate donors to massively finance this kind of thing. If the actual people of Ontario or Canada of their own initiative decide they want to be borderline fascist, I'm upset but until they cross the line and start trying to deconstruct democracy they have a right to. But I don't see why we should sit still while moneyed parties artificially pump up fascism in our society, or indeed artificially pump up any ideology in our society.

Looking forward to this

Looking forward to this committee going after the "Working Families Coalition" in the same manner.

Why is a federal committee so interested in a provincial election anyway?

Leftists want to shut down

Leftists want to shut down truth and reason because it destroys their emotional narratives. Canadian liberal radicals would go full Venezuela in a heartbeat if they could, they’re like fascists that way.

If this were a far-left group

If this were a far-left group, I bet there wouldn’t be any investigation. Trudeau must be getting scared.

Can you name ` a far left' group that behaves in this way? Or any that you think should be investigated?

I am pleased you gave credit

I am pleased you gave credit to Canadaland for its work because the podcasts are where I was first alerted to Rebel Media, Ontario Proud, and other organizations that in no way reflect my political inclinations.

Due diligence has become a

Due diligence has become a buzz phrase and now means exactly nothing. It is a coy way of saying we are not going to give out any true information about any given person, situation or cause. The user might as well come out and say they will lie if *push comes to shove*!