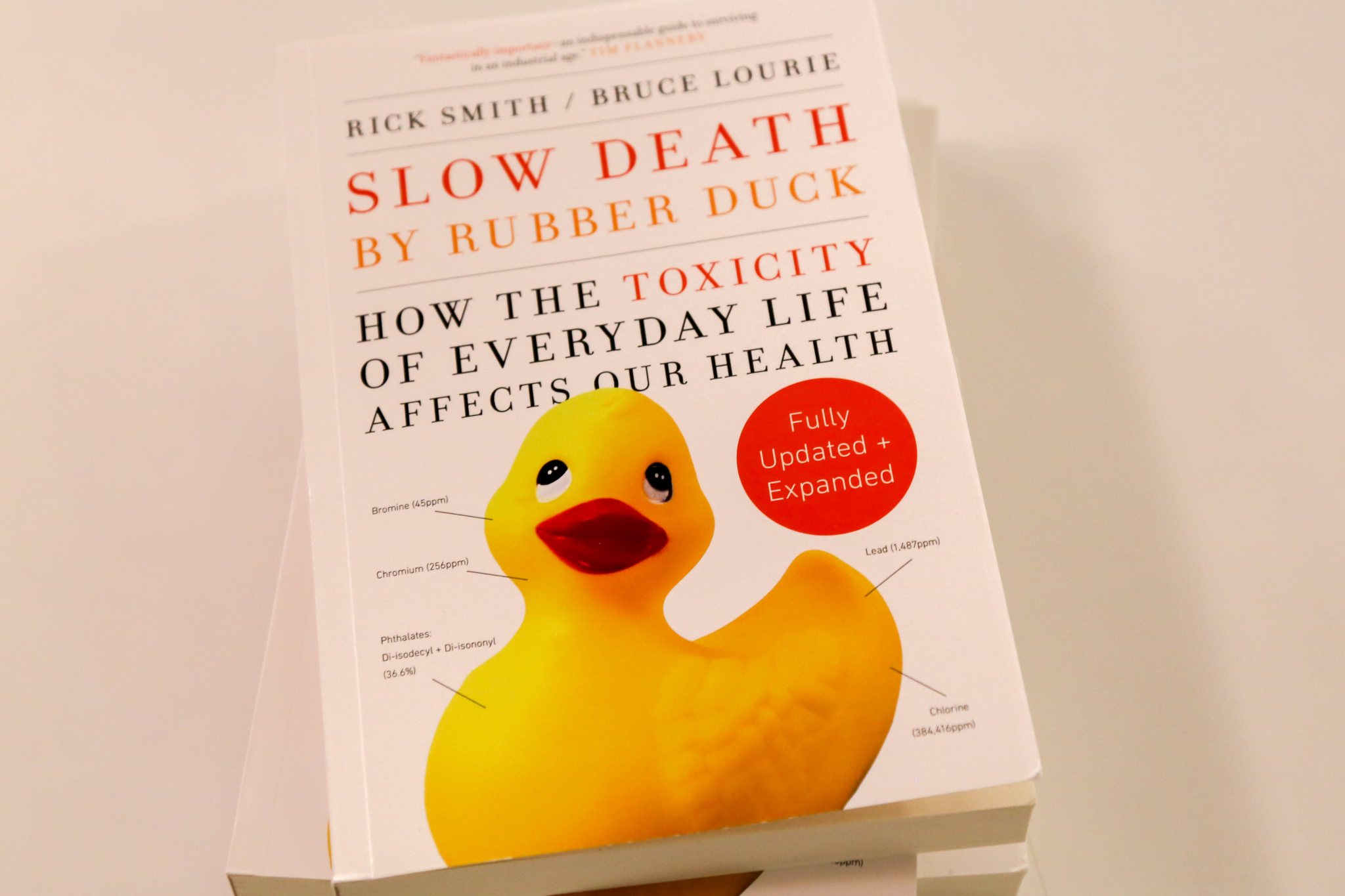 The new 10th anniversary edition of the book 'Slow Death by Rubber Duck' examines health impacts and calls for stronger regulations against toxic chemicals in Canada and around the world.
Previous story
Next story

“Bruce and I poisoned ourselves so you don’t have to,” joked Rick Smith, speaking at the launch of the 10th anniversary edition of the book Slow Death by Rubber Duck: How the Toxicity of Everyday Life Affects Our Health in Vancouver on Wednesday.

Ten years ago, Smith and co-author Bruce Lourie set out to write a book about the insidious, invisible toxic chemicals found in the products consumers handle every day, from shampoo and shaving cream to non-stick frying pans.

They took an unconventional approach, and decided to become guinea pigs themselves.

Through a dozen experiments, Smith and Lourie examined the impacts of chemicals including Teflon, triclosan, and bisphenol A — better known as BPA — on their own bodies.

They sat in a new car for six hours to measure levels of volatile organic compounds, such as benzene. They slathered themselves in products containing phthalates and parabens. Lourie ate tuna for a day to see if it would lead to higher levels of mercury in his body.

Across the board, Smith and Lourie measured increased toxins in their bodies.

“If we took the science related to these toxic chemicals seriously, this would be a huge societal priority,” said Smith, who is also executive director of the Broadbent Institute, an independent research organization founded by former NDP leader Ed Broadbent that promotes democracy, equality and sustainability. “We’ve created an enormous problem for ourselves that’s at the root of a lot of the diseases our families experience.”

The endocrine-disrupting chemicals that Smith and Lourie focus on can mimic and alter naturally occurring hormones. They’re linked to a range of serious health problems, including breast and prostate cancer, asthma, reproductive disorders, and rising rates of ADHD in children.

“The evidence now on all these chemicals is overwhelming versus ten years ago,” Smith said. “It’s incredible that it’s not provoking more of a public policy response.”

‘A pocket full of poison’

For the updated edition, Smith and Lourie conducted a new experiment that honed in on BPA. The chemical is heat-resistant, which allows for inkless printing on thermal paper. The authors collaborated with staff at Environmental Defence to measure the level of BPA in their urine after handling a pile of receipts for 15 minutes.

“The very least that one of our BPA levels went up was eight times, and the most was over a hundred times, just from handling cash register receipts,” Smith told the audience at HiVE, a co-working space and hub for social impact projects and programming.

Smith himself experienced the highest increase. According to Environmental Defence, Smith was the only participant who applied hand sanitizer, which opens up pores and increases uptake of chemicals through the skin.

People employed in the service industry, such as bartenders, servers, and grocery store clerks, are especially vulnerable to taking in high levels of BPA through prolonged exposure.

“Who knew you’re taking home a pocket full of poison every time you take a receipt from a store? And that’s just one chemical of tens of thousands that we’ve let get away from us,” Smith added.

The updated edition of Slow Death by Rubber Duck also includes experiments from Smith and Lourie’s 2013 book Toxin Toxout, and chronicles conversations with activists, government officials, and experts — as well as people who have experienced health impacts — to paint a picture of the average consumer’s everyday exposure to chemicals across the industrialized world.

According to the authors, Canada is around the “middle of the pack” globally when it comes to regulating toxic chemicals through the Canadian Environmental Protection Act (CEPA). The current act came into force in 2000, after the original legislation from 1988 was reviewed and replaced.

“The legislation was designed to measure large amounts of directly, acutely toxic things and ban them,” explained Lourie, president of the Ivey Foundation, a charitable organization with a mission to improve the well-being of Canadians. “The way it’s structured, you have to have a very high level of proof of harm.”

But the chemicals Smith and Lourie examined aren’t like the old generation of chemicals such as polychlorinated biphenyl (PCB) and dichlorodiphenyltrichloroethane (DDT), small doses of which linger in the body and pose serious health risks over shorter periods of time.

Rather, Smith said the “new generation” of chemicals covered in Slow Death by Rubber Duck is often water soluble, which means the human body can, to a certain degree, flush the toxins out. Health impacts might not appear for decades.

“You can’t do this direct causal relationship between an exposure and a particular health harm,” Lourie said of chemicals like BPA and triclosan. “But the legislation is set up only to deal with this kind of historic sense of chemicals.”

The European Union has moved ahead of the rest of the world when it comes to bringing regulatory frameworks for new generations of chemicals up to speed.

“What Europe has done is starting to force chemical manufacturers to go back in time and do the safety testing they should have done 50 years ago,” said Smith.

The Vancouver launch of Slow Death by Rubber Duck was hosted by Tides Canada, a leader in the Coalition for Action on Toxics, whose members include the Canadian Association of Physicians for the Environment (CAPE), Ecojustice, Environmental Defence, and Équiterre. Together, they’re pushing for strong changes and updates to CEPA, which is currently under mandatory five-year-review by the Trudeau government.

In the meantime, the good news is that it’s possible to mitigate exposure to many of the chemicals Smith and Lourie researched by making small adjustments to consumption habits.

“With a lot of these chemicals, once we removed ourselves from these situations or switched up the products we were using, the levels came back down,” Smith said.

“Nobody should have to be a chemical engineer to go shopping for themselves or their kids. But by being a little bit more careful you can, to a certain extent, bring these chemicals down in your body.”

The latest edition of Slow Death by Rubber Duck offers recommendations such as eating organic foods to limit exposure to organophosphates, a widely-used insecticide; exercising to sweat out chemicals like BPA; and using paraben- and phthalate-free personal care products.

“Consumer choice is better than it used to be,” Smith said. “But we still have a lot of work to do.”

Editor's note: This article was updated at 6:25 p.m. on March 14, 2019 to include additional information about the current positions of Rick Smith and Bruce Lourie.

Relative to the lingering

Relative to the lingering effects of the poisons/toxins "better living through chemistry" has spread around the globe the human lifespan is too short to provide the kind of evidence needed to condemn these noxious and alien substances. We seem unable to track the slow accumulation that has occured in our environment and our bodies that we bequeath to our descendents. We may, belatedly, just manage to mediate the worst effects of climate disruption - but we have scarcely begun to recognize the accumulating damage of our "miracle" chemical compounds.

It is not possible to remove

It is not possible to remove ourselves from the situation when corporate entities are allowed to spread toxins into our air, water and food. The excuse of "jobs" is used to suggest that the fracking that destroys all of these is somehow necessary. No child living downwind of a horizontally fracked well or compressor station is able to remove him/herself. It is up to us adults, through Government action, to protect our children from these perils.

Equiterre published a report a few years ago called "Pre-Polluted", showing that endocrine disrupting chemicals are found in the blood of new-born babies. I'm 99.9% certain that the Trudeau government will do nothing to interfere with the profitability of industry.