After a year of cuts, Doug Ford moves finance minister in major shuffle 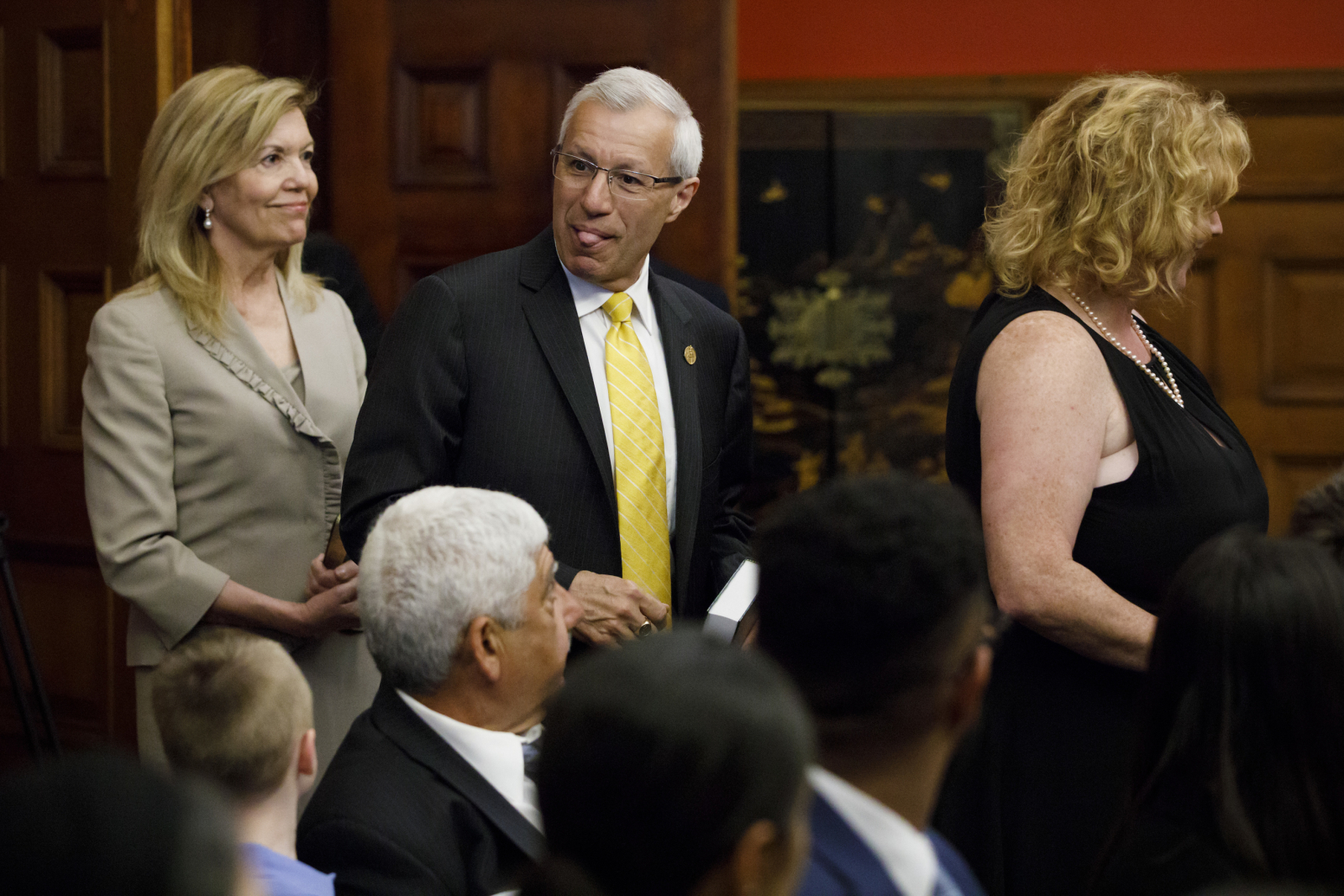 Ontario minister Vic Fedeli sticks his tongue out as he sees family entering the music room to be sworn in as the Minister of Economic Development, Job Creation and Trade during a cabinet shuffle at Queen's Park on June 20, 2019. Photo by Cole Burston
Previous story

Most notably among those demoted, Vic Fedeli, who was pushed out of the finance portfolio.

The shuffle was announced after weeks of negative headlines highlighting cuts to public programs and services unveiled in Fedeli's first and only budget tabled less than three months ago.

The shakeup also comes amid polling that shows Ford's popularity has plummeted significantly since he swept aside the former Liberal government of Kathleen Wynne in June 2018.

Phillips earned extensive praise from Ford for taking Ontario out of its cap-and-trade program with Quebec and California. The premier called him an all-star on several occasions.

Jeff Yurek, formerly minister of transportation, takes over for Phillips in environment.

Additionally, all but seven ministers saw their roles changed. With the shuffle, the size of Ford's cabinet increased by a third, growing from 21 to 28 ministers and associate ministers, despite Ford’s having previously said that he intended to keep his cabinet small to save taxpayers' money.

Ford told reporters after the swearing-in of his new cabinet that the one thing he would have liked to do better in his government’s first year was “getting all the great successes out into the news and making sure the media are fair and balanced.”

Ford was audibly booed on Monday at a rally to celebrate the Toronto Raptors’ NBA championship, a reaction not shared by Prime Minister Justin Trudeau or Toronto Mayor John Tory, who were introduced at the same time.

“You can change the communicator, but the message is the same,” Andrea Horwath, the Opposition and NDP leader, said in response to the shuffle.

Public disapproval would only grow “unless the new cabinet is able to get Doug Ford to change direction and start paying attention to what’s really happening out there.

“There’s no good way to communicate the kind of cuts that this government has forced on Ontario families,” she said, adding that the new ministers will find it is “scorched earth they’ve inherited from their predecessors.”

Ford sought to convey confidence in Fedeli, Lisa Macleod and Lisa Thompson, the three biggest heads to roll in the shuffle, framing the government’s second year in power as one that would be much different from its first.

Macleod, as minister for children, community and social services, had been in charge of introducing an overhaul to how autism services are delivered. Protests from parents of autistic children forced Macleod and Ford to backtrack on some measures.

Teachers’ unions and school boards across the province have said the Ford government’s budget cuts mean they will not be bringing back all teachers and other education staff after summer school holidays.

Among other high-profile changes, Caroline Mulroney was replaced as attorney general by back-bencher Doug Downey, while retaining francophone affairs and adopting transportation, which will put her in charge of major subway and other transit projects in Toronto.

Ford intervened in an ongoing municipal election campaign days after being sworn in last year, moving to cut the number of council seats almost half.

Tory struck a diplomatic tone when asked about the shuffle, saying he looked forward to working with them in “a spirit of mutual consultation and partnership.”

Toronto city councillor Mike Layton said that, unless the new caucus stands up to Ford and his inner sanctum, the provincial government will likely see its popularity slip further as the reality of its cuts are felt more keenly.

It is rare for a finance minister to be demoted after only one budget.

Both Fedeli and Phillips were recruited by former PC leader Patrick Brown in 2017. Fedeli was also briefly interim party leader after Brown left after sexual misconduct allegations in January 2018.

But the negative reaction to Fedeli's budget has been relentless, putting Ford's government on the defensive and culminating in a decision to adjourn Queen's Park for an extended summer break that will continue until after the October federal election.

The Ford government has most recently backtracked on proposed cuts to municipal funds after a very public and heated battle with Tory. 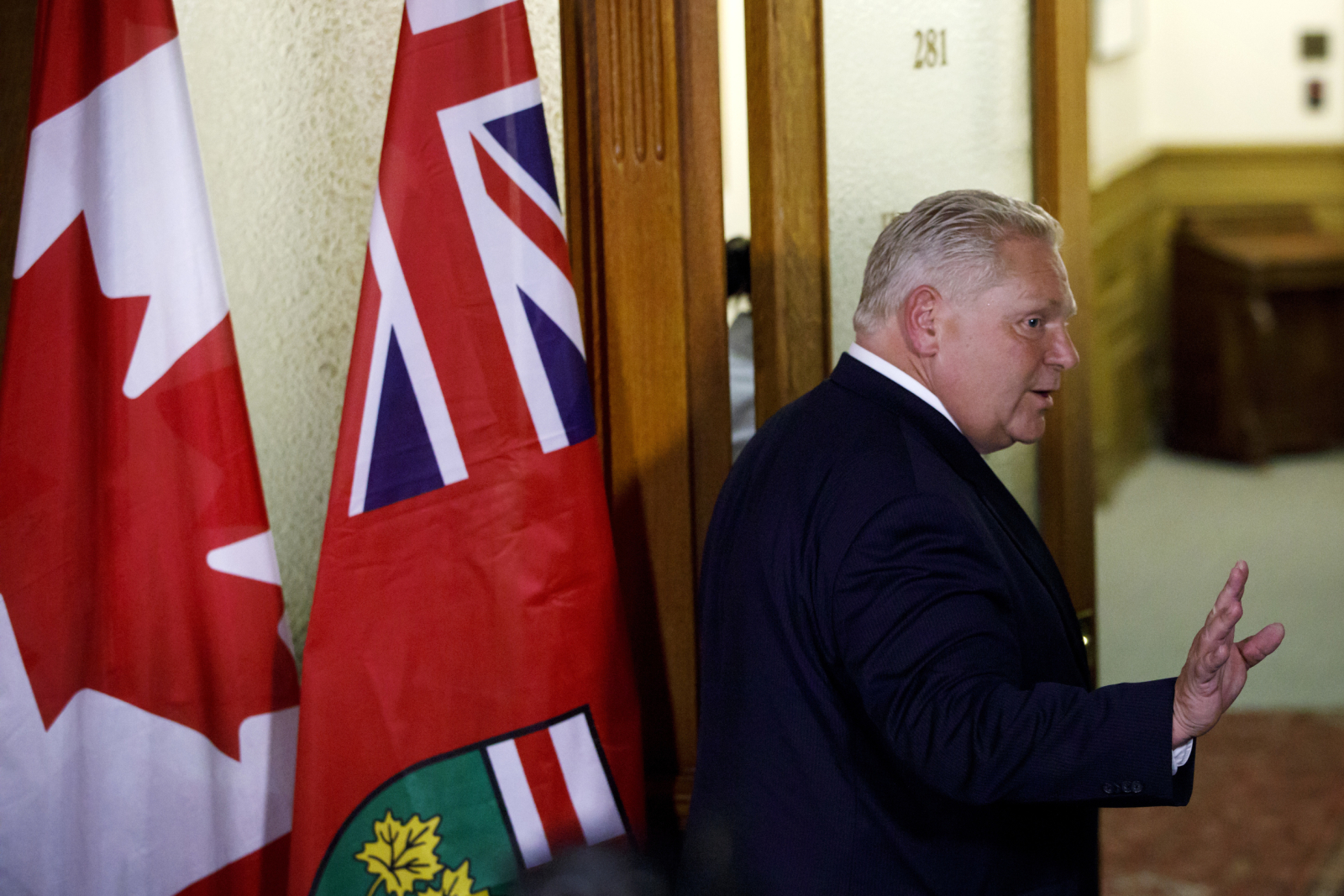 Ontario Premier Doug Ford speaks to reporters outside his office following a cabinet shuffle at Queen's Park in Toronto, Ont. on June 20, 2019. Photo by Cole Burston

The premier unveiled his new team a few days before celebrating the one-year anniversary of the day he was sworn in at the annual Ford Fest, a barbecue bash held in Ford's riding of Etobicoke in west Toronto. The Tories were elected on three core goals: eliminating the provincial deficit, boosting the economy and reducing the tax burden.

The government's April 11 budget included an extensive list of cuts and changes that have impacted everything from Ontario schools to municipal governments to health agencies and legal aid to research and tourism, in an effort to eliminate an $11.7-billion deficit. The budget also spends $4.9 billion more than last year’s Liberal financial plan.“It’s his priorities that are the problem, not who sits around the cabinet table,” said John Fraser, interim leader of the Liberals. “They hired a special advisor for alcohol and axed the child advocate.

“This premier is obsessed with booze, gas pump selfies and endless campaigning."

The shuffle also comes a day after the government laid off 416 people in the Ontario public service as a result of its overhaul of the province’s health care administration system. It also arrives after hundreds of layoffs of teachers across Ontario due to increased class sizes and a shift towards e-learning.

Both moves contradict a key pledge Ford made during the final leaders’ debate of the 2018 election: “Nobody will be laid off."

Ford insisted he has “the best cabinet this province has ever seen and I’ll put it up against any government in Ontario," one year ago.

“The men and women standing behind me, each and every one of them are more than capable of hopping into any portfolio and getting a job done,” he said on June 7, amongst his cabinet. 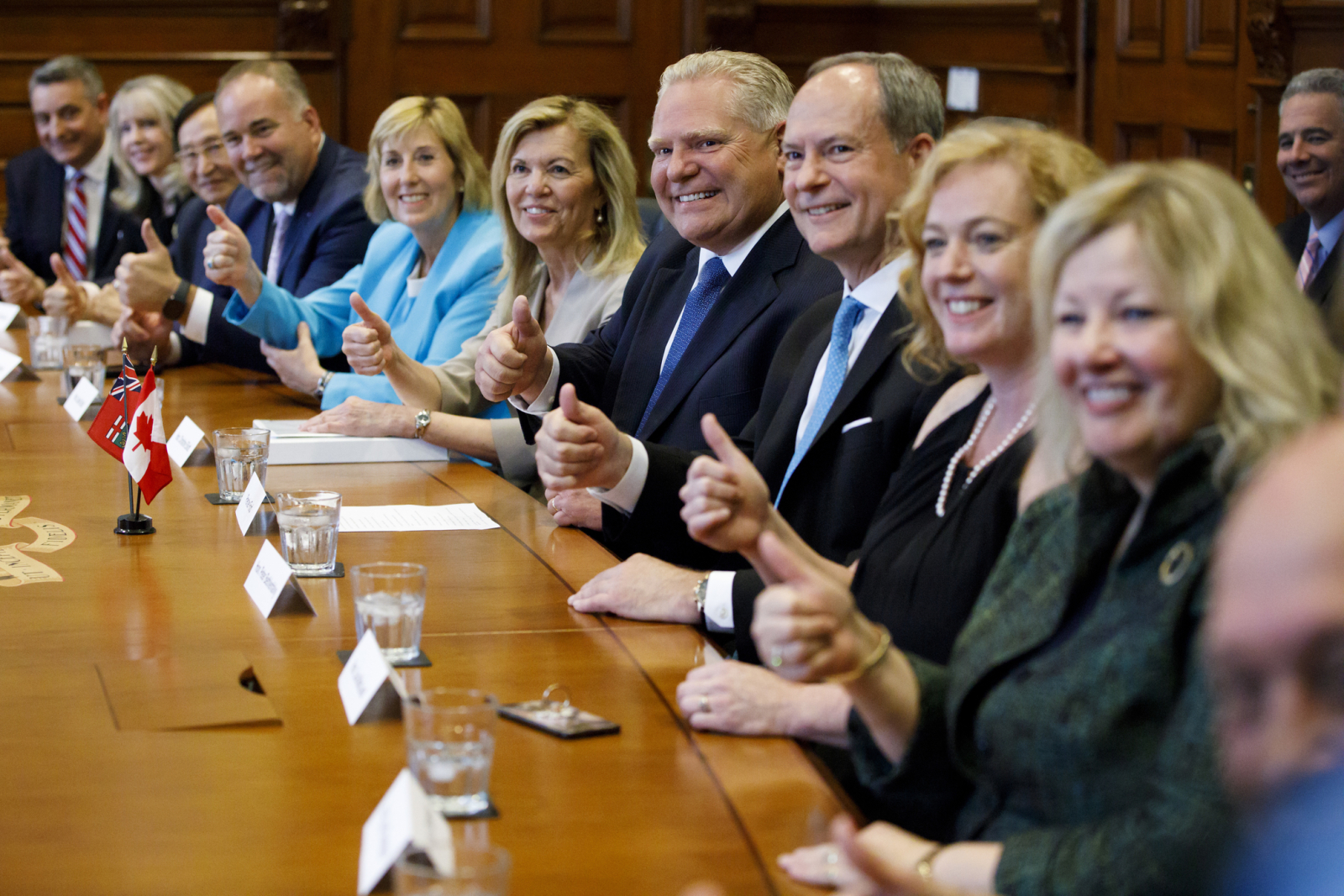 Ontario Premier Doug Ford is joined by his new ministers following a cabinet shuffle at Queen's Park in Toronto, Ont., on June 20, 2019. Photo by Cole Burston

When will Canadians take the

When will Canadians take the 15 minutes it requires to understand neoconservatives of the Trump/Ford/Kenny variety? It's not rocket science. Here's my short list, quickly put together as I read the article.
1. Cuts to public programs: you can count on it, and forget their promises. Promises are electioneering, cuts to the public purse, what governments are supposed to administer, are inevitable. Fact is, you can't have services without taxes, and Conservatives are penny pinchers who don't want to pay taxes. Corporations in particular, don't want to pay taxes, and corporations fund the Conservatives in electioneering mode.
2. Growth in their bureaucracy, once in power: Everyone loves a government job, particularly once the need for sound public policy is eliminated; its our enemies need to have their organizations cut, cities like Toronto that need to run on empty. Toronto can do with fewer elected councillors, Ford's government has to balloon from 21-28 cabinet positions.
3. Always blame others, never accept responsibility: Ford stands by his policies, including the lie that there would be no cuts, after 416 layoffs in health, and the anticipation of teacher lay-offs in the fall.......yes, e-learning (machine learning) is good enough for Ontario's children, and wait for it, all we need is a new Minister of Computer Literacy.......or some damn meaningless equivalent. Remember, if there's any drop in the polls its not Ford's fault; its the fault of bad press. SO HERE COMES THE FAKE NEWS CARD...USED SO EFFECTIVELY BY THAT BORON TO THE SOUTH OF US.
4. At the end of it all........have we saved any money? Do we ever, when we go to war on women, children, and the old? Horror stories of long term care in Ontario will get worse, not better,(the new minister of long term care is just going to take the flack for it) and the money saved will all go into the pockets of the private providers......and count on it, there'll be no compensation for long term care workers who burn out trying to do an impossible job. If they squack, the Ford government will attack their unions.

But hey??? If you're into blaming government, putting your trust in international investment and open business policies, and hoarding your pennies in tax shelters (or holes in the ground) by all means.....Vote RIGHT WING CONSERVATIVE.

Nothing gets us back to the feudal state of an obscenely rich aristocracy, and an obscenely exploited peasantry. With all this 'artificial intelligence' on the horizon, what do we need a middle class for anyway???

I could follow your argument until you got to the bit about "declaring war the women, children and the old" as if none of this affects men between 19 and 64. Identify politics like that is always misinformed.

I love your comment! Enjoyed reading it. And the only decent thing about Ford's cabinet, not that I am conservative, was Caroline Mulroney in her former position.