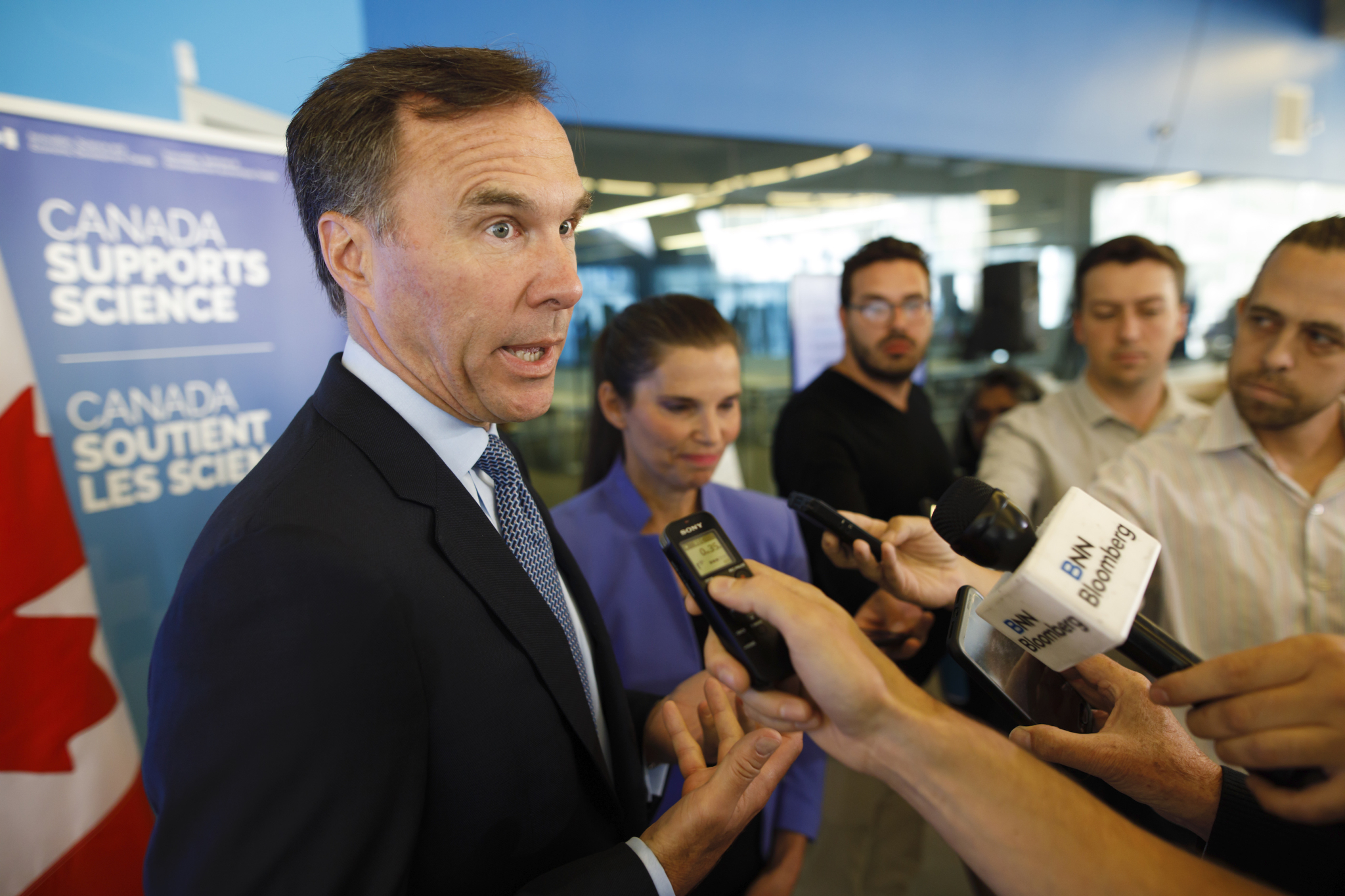 Bill Morneau, the federal finance minister, answers questions after an event at Ryerson University in Toronto on Aug. 15, 2019. Photo by Cole Burston
Previous story
Next story

Canada's finance minister doubled down on a carefully crafted government line related to the SNC-Lavalin affair on Thursday, a day after an explosive report by the ethics commissioner found that the prime minister broke the law.

Bill Morneau, a heavyweight supporter of Justin Trudeau's efforts to help the Montreal-based engineering and construction company avoid a criminal conviction, says he did nothing wrong by seeking to protect Canadian jobs.

Morneau argued that repeatedly reminding then-attorney general Jody Wilson-Raybould about the potential economic impact of a bribery trial and possible conviction for SNC-Lavalin was part of his job description.

The key role Morneau and several of his senior staff played in pressuring Wilson-Raybould is detailed in the Trudeau II report, released by Conflict of Interest and Ethics Commissioner Mario Dion on Wednesday.

The report highlights meetings Morneau had with then-SNC-Lavalin CEO Neil Bruce, during the 2018 World Economic Forum in Davos, Switzerland, as well as with Kevin Lynch, chairman of SNC's board and former chief of the privy council, during a November visit to Beijing.

Soon after the Davos meeting, the Dion report says, Morneau's director of policy, Justin To, had a follow-up meeting with Bruce and other SNC-Lavalin representatives in Ottawa, at which they presented him with "a confidential discussion document" supporting their argument that a plea deal would help the company maintain its head office in Canada and increase its Canadian workforce.

Morneau's chief of staff, Ben Chin, who is now working in the prime minister's office, contacted Wilson-Raybould's office in mid-August to ask if anything could be done to expedite the process of getting a remediation agreement for SNC-Lavalin, the report says.

In early September, Canada's public prosecution service informed SNC-Lavalin it would not offer a plea deal. At the Beijing meeting, Lynch was eager to communicate the company's concern that the director of public prosecutions had decided not to offer a remediation agreement, according to the report.

'That is not in fact the way that is written'

Morneau's 2018 budget bill, Bill C-74, deals with deferred prosecutions. It says that a prosecutor "must not consider the national economic interest, the potential effect on relations with a state other than Canada or the identity of the organization or individual involved" when considering offering a deferred prosecution to those "alleged to have committed an offence under section 3 or 4 of the Corruption of Foreign Public Officials Act" (CFPOA).

SNC-Lavalin was charged in 2015 with contravening sections of that law and the Criminal Code for alleged bribery and fraud in connection with its activities in Libya from 2001 to 2011.

A working group on bribery at the Organisation for Economic Co-operation and Development also noted earlier this year that prosecutors in countries that have joined the Anti-Bribery Convention, such as Canada, cannot consider "political factors such as a country’s national economic interest" in investigations.

A criminal conviction would mean the company couldn't bid on federal contracts for a decade. A deferred prosecution, on the other hand, would spare the company such sanctions, provided that it take certain actions like co-operating with other investigations and acknowledging wrongdoing.

Asked about how his use of the lost-jobs argument fits with a law that explicitly precludes “economic interest” considerations, Morneau replied: "That is actually incorrect, that is not in fact the way that is written."

'That is the job of all members of Parliament'

Duncan, who was standing next to Morneau amid a small group of reporters, interjected to add: "That is the job of all members of Parliament."

Duncan also argued that Dion "took a strong view that any contact with the attorney general was improper." She then added, "We disagree with that."

Morneau's defence echoed that of Trudeau, who said on Wednesday that he believes his actions in the SNC-Lavalin affair were justified.

It also comes as Conservative MP Peter Kent sought to call Dion and others to answer questions at Parliament's ethics committee about the "grave situation".

Conservative Leader Andrew Scheer has called on the RCMP to investigate Trudeau.

NDP ethics critic Charlie Angus also stated on Twitter that he had written to Zimmer calling for an emergency meeting of the ethics committee in response to Dion's report.

Just more " you scratch my

Just more " you scratch my back I will scratch yours" The hypocrisy is stifling. Of course the liberal caucus have circled the wagons. Too late however to save their political skins come Oct. - Vote "GREEN"

And end up with conservative

And end up with conservative majority......

Blatant interference in the

Blatant interference in the independence/autonomy of the legal system. This is a hallmark of corruption. It is antithetical to democratic safeguards, it is an assault on democracy.

My ideal result would be a

My ideal result would be a coalition involving the Green Party such as we have in BC. I suspect that it has given our Premier more than a few headaches but he and his government are doing a fine job and are gaining more and more respect and support as his term progresses. In the end I have come to believe that it doesn't matter what party is in power as long as it demonstrates sincere honesty and conducts itself openly with an obvious responsibility toward all of the citizens. This bellowing partisanship and corruption are disheartening to us all.

Morneau and the rest of the

Morneau and the rest of the Liberal team refuse to understand the consequences of this blatant attempt to squelch or at least ride herd on the autonomy of the justice system. They are all guilty of manifest corruption. They can blame-cast their severed caucus members and attempt to steer the focus onto the consequences for the economy (temporary). But anyone with perceptions, integrity, and conscience can see the (long term) consequences their actions , if not challenged, would have for the independence of Canada's legal systems.

As I now understand the

As I now understand the events SNC-Lavalin brought the DPA to the government with a large number of lobbyist meetings. SNC-Lavalin apparently suggested introducing the DPA into an omnibus bill (why do that?)
I think right about when the lawyers for the corporation that had already been charged with corruption starting making those suggestions "we" should have consulted the Justice Department, been informed of the laws and how "we" should conduct ourselves and let justice take it's course. This did not happen and the Ethics Commissioner has found that the "law was broken" by our various members of government holding the high and highest offices in government. To support such conduct with any principled explanation(s) is wrong. The voters will decide just how wrong but I am at least as ashamed of the present government for their recent conduct as I am for their conduct during the SNC-Lavalin affair in the Spring.

Kristy (by her remarks) seems

Kristy (by her remarks) seems to indicate to me that the "rule of law" is not important to her or her fellow party members. When in fact it (the law) is far more important than tossing away your integrity in support of an obviously corrupt corporation. This is very bad indeed.